I read 7 books in the past two months, which is my usual rate, but two of those are absolute door-stoppers, so I did manage to read more than usual. Here they are (I can’t remember when I read which, so I’m dividing them into fiction and non-fiction): 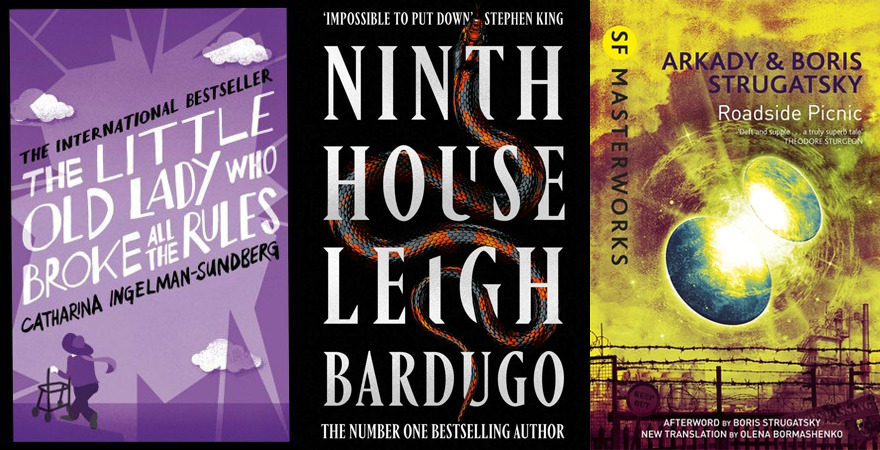 The Little Old Lady Who Broke All the Rules by Catharina Ingelman-Sundberg:

After all the non-fiction books from January and February, I wanted some easy, fun fiction, so I picked up the Vietnamese translation of this Swedish book. Very similar to The Hundred-Year-Old Man Who Climbed out of the Window and Disappeared (even the cover looks similar), it tells the story of five senior citizens who, fed up with the way they are treated at their nursing home, decide to escape and go on a crime spree. Alas, the story is nowhere as fun as that sounds. The situations are not wacky enough, and the characters achieve everything very easily, not because they are clever, but because they are lucky and everybody else is so incompetent. At least it’s a quick read. 1.5/5

Leigh Bardugo’s Grishaverse series (Shadow and Bone trilogy and Six of Crows duology) is one of my favorite YA fantasy series of recent years, so I’m quite excited to read her first adult fantasy book (more of a horror/fantasy.) You know that movie The Skulls with Joshua Jackson, in which he plays a college student that joins a secret society at Yale, only to find out it holds a sinister secret? This is like that, except instead of Joshua Jackson, you have a girl that can see ghosts, and instead of a criminal conspiracy, you have a magical conspiracy. The eight secret societies of Yale are all magic users, and the main character, Alex Stern, is hired as the representative of the ninth society (hence the title), which has the task of making sure none of the other societies does anything harmful or illegal. Of course, something harmful and illegal does occur, and it’s now up to Alex to discover the truth.

In a way, this is quite similar to the Shadow and Bone trilogy – each of the societies deals with a specific branch of magic, just like each of the Grisha disciplines, and the relationship between Alex and her mentor, Darlington, resembles the relationship between Alina and the Darkling (even their names are similar!) The start is a little slow, the wrap-up is a little rushed, and it can be very violent and disturbing at times, but I really enjoy this and am looking forward to the next in the series. 4/5

I’ve heard of the Strugatsky brothers before – they are hailed as the best Soviet sci-fi writers, and during my film study, I’ve come across Andrei Tarkovsky’s film Stalker, which is based on this book – but I’ve never had the chance to read them until now. The story takes place in the aftermath of an alien visit – the aliens came to Earth and left almost immediately, leaving behind dangerous, mysterious landing places called the Zones. The main character is one of the “stalkers” who would venture inside to bring back alien artifacts and sell them on the black market. Now, after years of risking his life and the life of his mutant daughter, he goes on one last mission to enter a Zone in search of a mythical object that has the alleged power to grant wishes.

What I really like about this book is that it tackles an issue I haven’t seen in many other stories about aliens – the fact that, if we do encounter alien intelligence, we may not understand it, and they may not understand us. This is what the title refers to – the aliens’ visit is like a “roadside picnic”, and we are the rodents and the insects that come afterward to pick through the trash and the leftovers. It also feels strangely prophetic, considering it was written 15 years before the Chernobyl Disaster – the idea of a deadly “Zone” that can potentially kill anyone that comes in contact with it and leave their children mutated is hauntingly familiar.

That being said, it is very bleak (but any book written in 1970s Russia is bound to be bleak) and there’s not much of a story here. I appreciate the idea, but I prefer something with a bit more plot. 3/5

The Diaries of Samuel Pepys:

I love reading about how people lived in the past, so I’ve been trying to pick up the Pepys diaries a bunch of time – I mean, what better way to learn about how people used to live than reading the day-to-day life of a guy who actually lived in 17th-century London and witnessed such momentous events as the coronation of Charles II, the Great Fire of London, and the Great Plague? As it spans over 10 volumes and 1000+ pages, I’ve always been daunted by the sheer size of it; however, since we’re all staying home, I had a little extra time on my hands, so I decided to check it out.

It is fascinating to read, simply because it conjures up so vividly the everyday life of a distant past. When you think back to those times, you only think of the great historical events, but these diaries remind us that amidst those events, people still go about their normal life, go to work, eat, entertain themselves, worry about money, argue with their wives about the dog (this is one of my favorite passages), very much like we do today. Pepys was no angel – he was a womanizer, he treated his wife and his sister badly, and was generally quite self-absorbed. But these flaws only made him more human and his diaries more real. I confess – it does get a little tedious after a while though, so toward the end, I just skipped to the juicier bits. 4/5

Why We Sleep by Matthew Walker:

This book isn’t just about why we sleep, but also how we sleep, what happens if you’re sleep-deprived, and how modern society and work habits are killing us by forcing us to sleep less. I initially wanted to read this book because I thought I was sleeping too much – I always try to get at least 8 hours a night (meaning I’m in bed for closer to 8.5 to 9 hours) plus at least a 30-minute nap in the afternoon – but after reading this, I feel pretty good about my choice. I only wish it could be a little more entertaining and a little less alarmist (but then again, the lack of sleep is a very real threat to health and safety, so maybe it’s good to be an alarmist.) 3/5

The Body by Bill Bryson:

With the subtitle “A Guide to Occupants”, this latest book by my favorite non-fiction writer is about all things relating to the human body – how it’s built, how it functions, and how it breaks down. The information is not new (at least not to me,) but it’s entertaining to read (it’s Bill Bryson after all); there are a lot of fun anecdotes about the scientists, some well-known, some forgotten, behind all the discoveries of the human body, and the chapter on diseases and virus is especially timely. 3.5/5

The Romanovs by Simon Sebag Montefiore:

This book follows all the tsars and tsarinas of the Romanov dynasty through over 300 years of their reign. I picked it up to read before my trip to Russia, but it’s too heavy and dense (nearly 700 pages of very small print), so I had to leave it until now. Now I’m glad I did, because having been to Russia, it makes it easier for me to remember all the names and follow the story. And what a story – murder, madness, mayhem, torture, sex, and war, endless war (“Game of Thrones” has nothing on these guys.) I’d like to read more about the personalities of each monarch and about court life, rather than what war they’re waging and which courtier they’re promoting or demoting, but there’s no denying that this is very detailed and very well-researched. 4/5

So what did you read?