Whenever I’m hit with a case of “I have nothing to wear”, and that is quite often during the transitional time between seasons (like now), I would come back to my tried-and-true combination: top + midi skirt. If I could have a signature look, that would be it. A top, a midi A-line skirt, and sensible shoes (not that I have any other kind of shoes.) It also helps that most of my skirts are basic enough that they can be pared with pretty much any top. True, it can be less-than-exciting sometimes, but it does make my morning a little easier.

As much as I love to spend my entire day in my pajamas, there always comes a time when I feel sick of looking like a schlub. Well, friends, this is that time. After nearly a month of working from home, I just want to dress up for no reason at all, so I did. Although, I didn’t exactly dress up for no reason – I did wear this to see Spider-Man: Homecoming. And yes, I was kinda coordinating my color scheme with the red-and-blue scheme of a Spider-Man costume. At first I was only going to wear the t-shirt, but then I noticed this lace collar and thought, Hey, that kinda looks like spider web, so I added that too. This looks like something I would wear about five years ago – I haven’t worn a Peter Pan collar in so long – but I quite like it.

I quite liked the movie as well. It’s definitely the first movie that manages to make Spider-Man seem like an actual teenager and capture his smartass humor (The Amazing Spider-Man made a stab at the humor too, but Andrew Garfield ended up more smug than smartass. Sam Raimi’s Spider-Man didn’t even try.) On the flipside, it also means that the movie is more like a high school comedy and less like a superhero film, but that’s OK. At least it’s not another freaking origin story.

Dress For The Job You Have

You know that saying, “Dress for the job you want, not the job you have”? I always find it kind of a limited advice, and in my case, downright counterproductive. If I dressed for the job I want (freelance writer/script doctor), I would wear nothing but ratty old T-shirts and sweatpants all day. So in the meantime, I’m going to dress for the job that I actually have and want to keep, thank you very much.

P/S: I’m actually surprised it took this long for my matchy-matchy brain to pair this shirt with this skirt.

Here’s my outfit for this week’s SIA, inspired by Hokusai’s iconic “The Great Wave off Kanagawa“. The skirt and sandals are my first choices, since the soft pleats are a perfect echo of the waves in the print, and the sandals mimic the boats. I thought about pairing my polka dot chambray shirt with it for a different shade of blue, and also to mimic the dotted sprays, but then I opted for this hand-me-down white shirt from my sister and my polka dot scarf instead (and the scarf is not just a pointless accessory either – I’ve been coughing for like two weeks now, and the constant rain doesn’t help, so a scarf keeps my neck nice and warm.)

Don’t forget to check back tomorrow for the round-up! 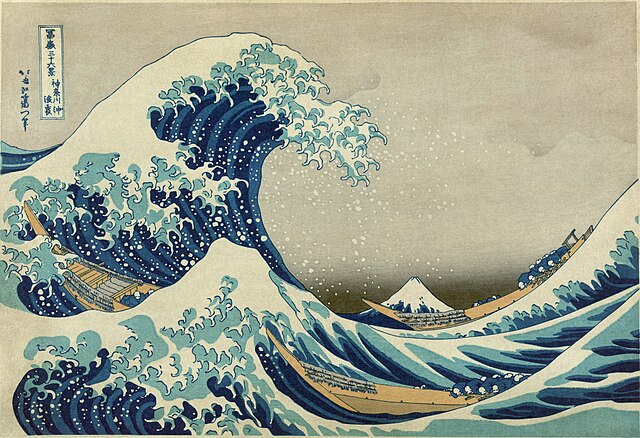 P/S: By a fun coincidence, the week we’re featuring Hokusai’s most famous print also saw the release of the trailer for “Miss Hokusai”, an upcoming animated feature about Hokusai’s daughter, who was also a painter:

I feel very much like a Gibson Girl in this outfit. Considering the 1900’s is one of my favorite eras in fashion (along with the 1800’s, 1880’s, and 1930’s), it’s not surprising. I think it’s the combination of the simple, high-collared shirt, the dark skirt (of course, on a real Gibson Girl, the skirt would’ve been floor-length), and sensible but still cute shoes. Should’ve worn a brooch too. What I’m really missing, though, is the hairstyle – I’ve tried the “Gibson tuck” so many times before, but my stupid hair won’t stay put and won’t hold the bobby pins. So alas, I had to make do with this quick bun instead.