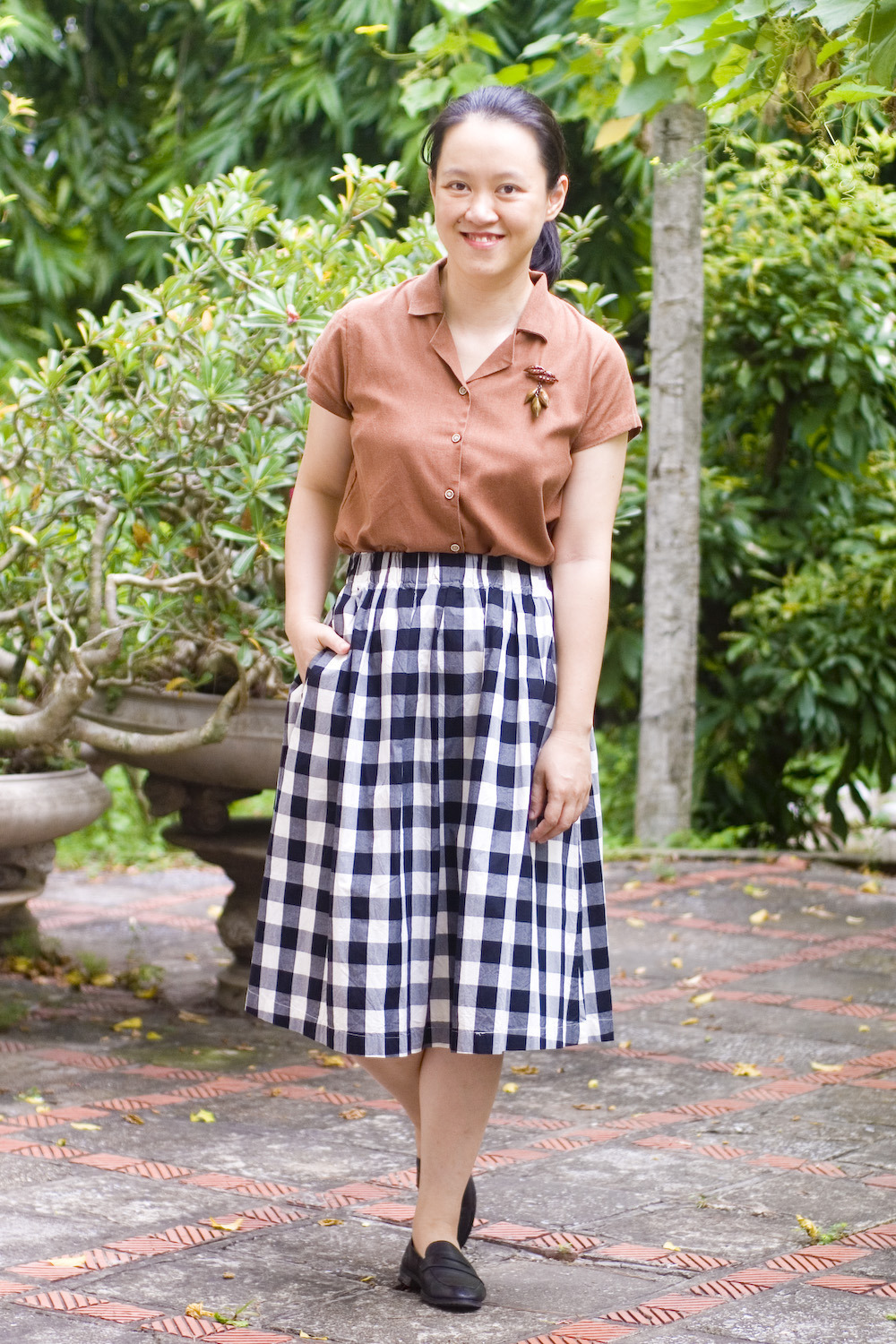 Mid-September in Vietnam is still way too warm to start thinking about fall, but I can’t help it. It’s after the Mid-Autumn Festival, shops are getting stocked with fall/winter clothes, fall-themed songs are all over the radio, and I’m so sick of my summer wardrobe already. So while it’s still warm, I resort to dressing in fall-appropriate colors (not fabrics!) and accessories instead. See, my thinking is that, if I dress like it’s fall, maybe fall can get here sooner. Call it the Field of Dreams logic. “If you dress like fall, it will come.” 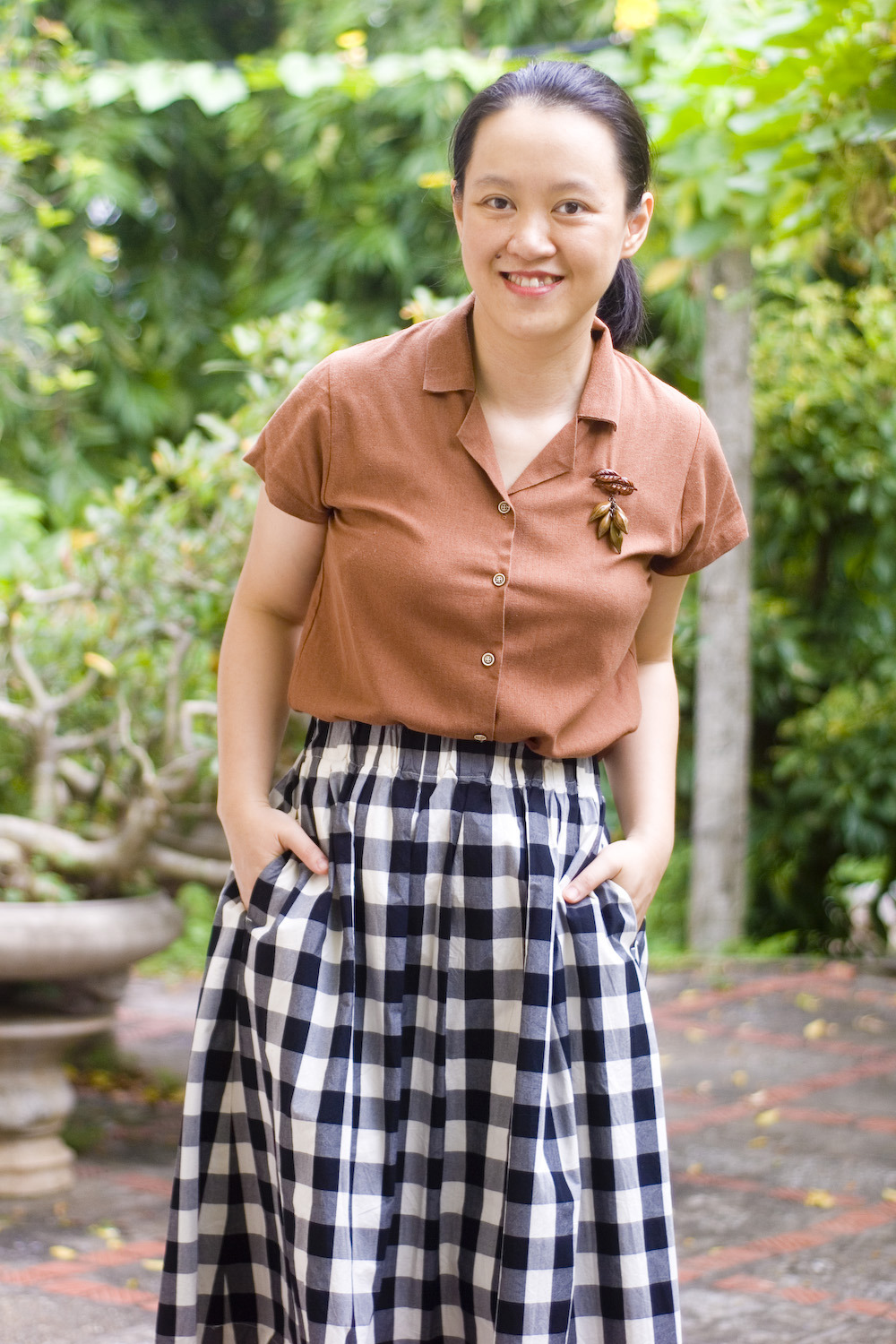 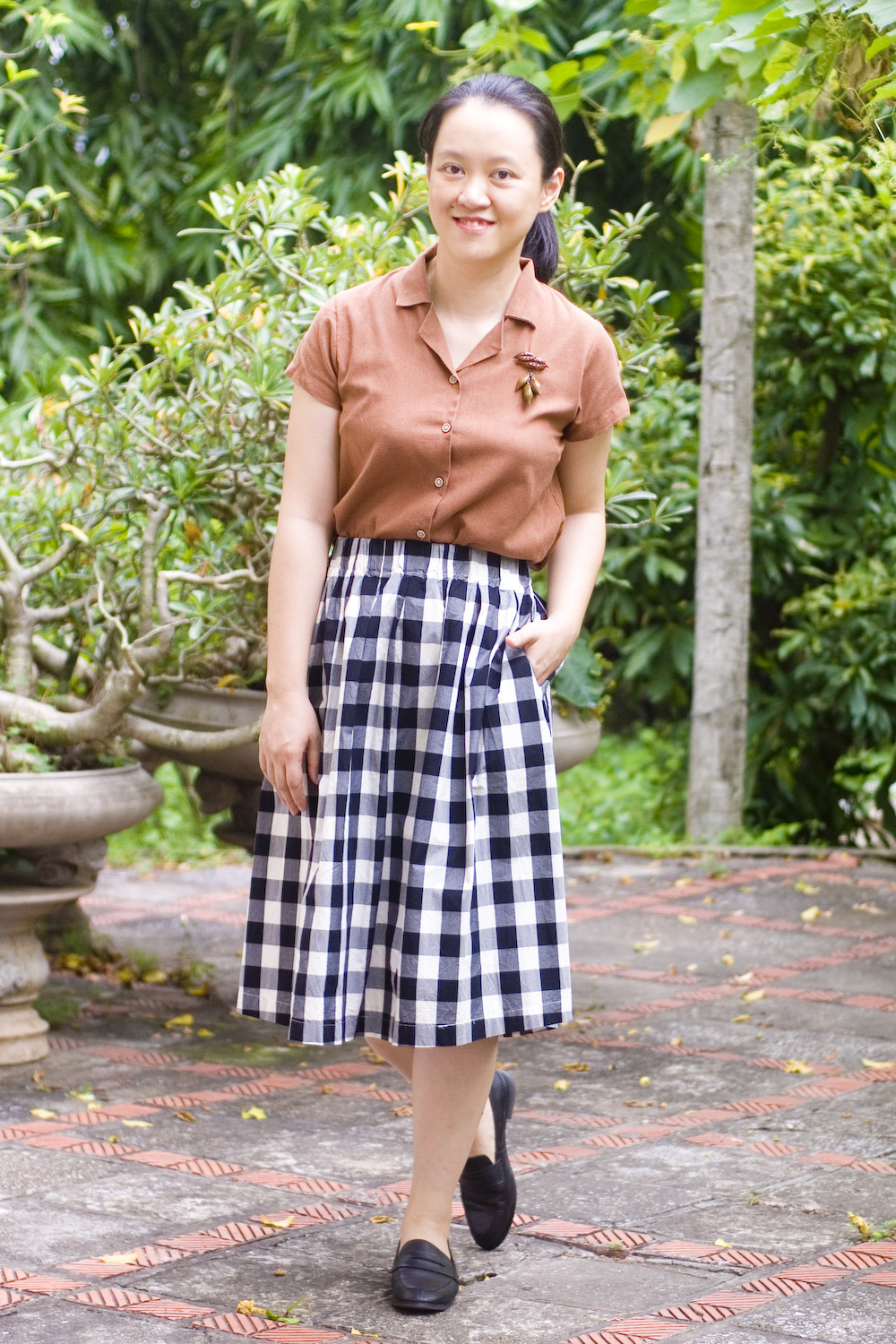 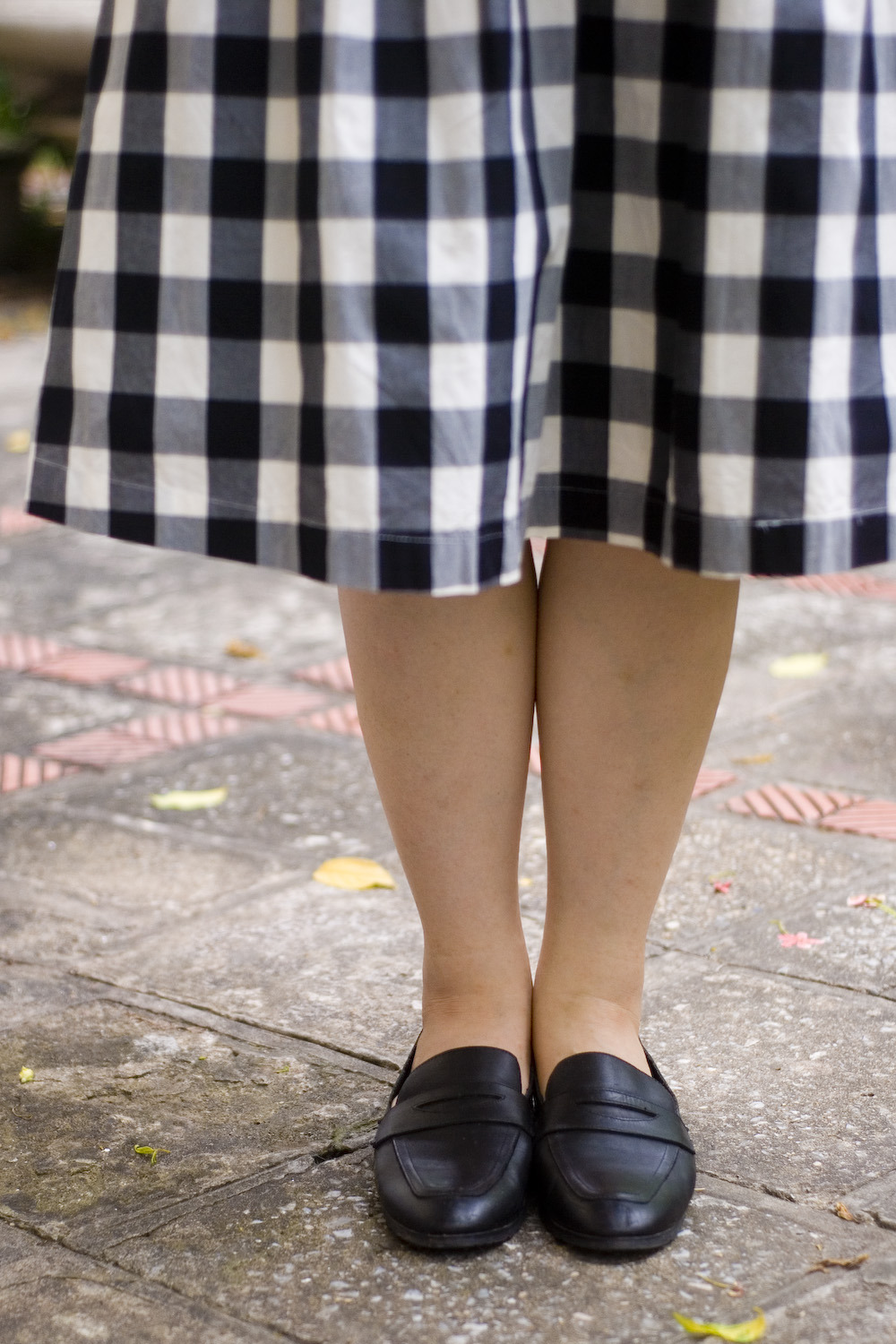 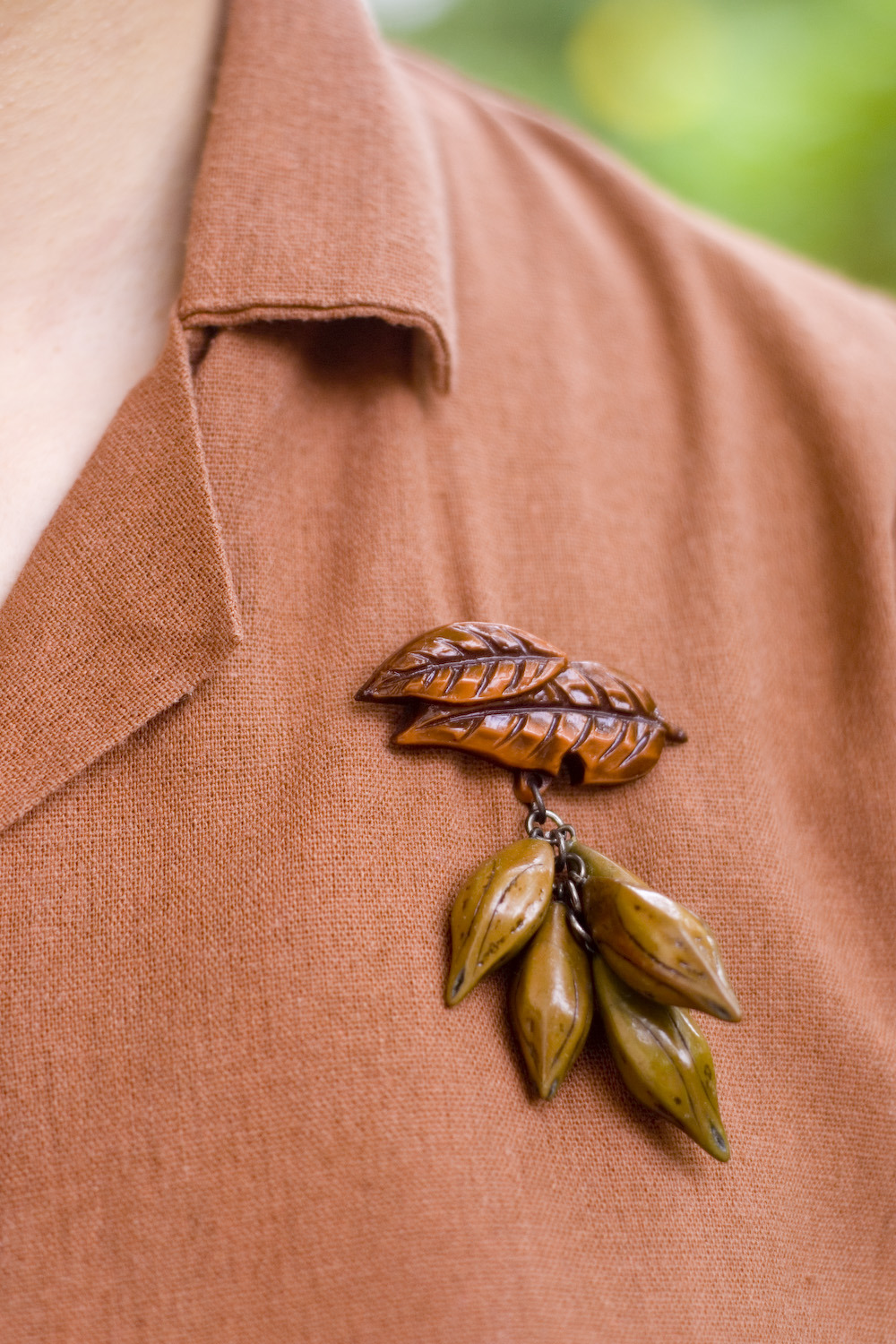 Back To School, Pandemic Style 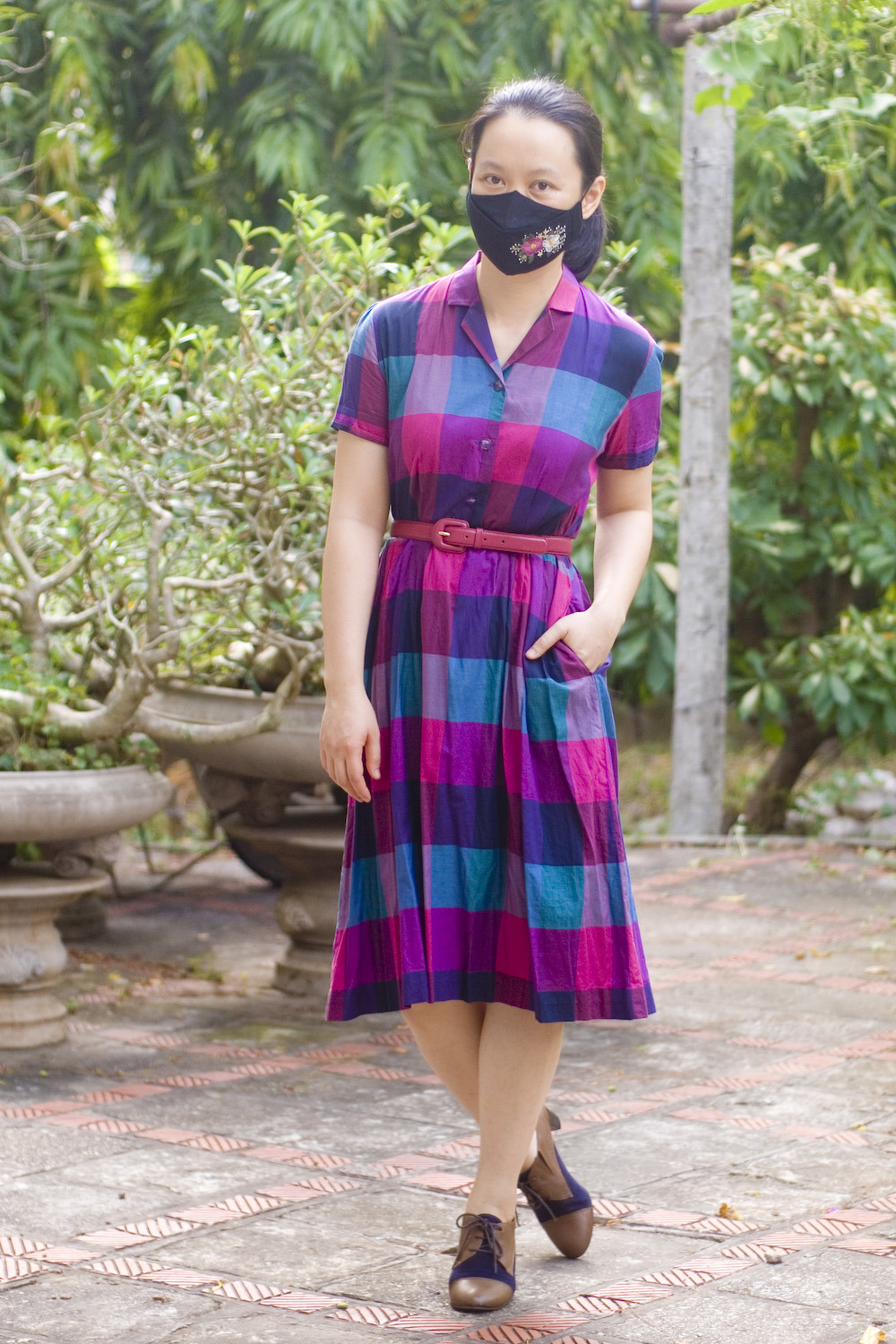 As I mentioned in my post on Wednesday, school has started again this week, and it’s the first time I taught a class in-person again in about… gosh, I don’t even remember how long. A year? Technically, the latter half of the last semester was in-person too, but I just kept teaching online because, as I teach writing, it’s actually easier for me to teach online than in person. But there is no escaping it now, and just in time for a new wave of COVID too (yay…) Everybody keeps saying that the new variants are not as serious, but I’m taking no chances and sticking to my face masks (almost literally) for now. 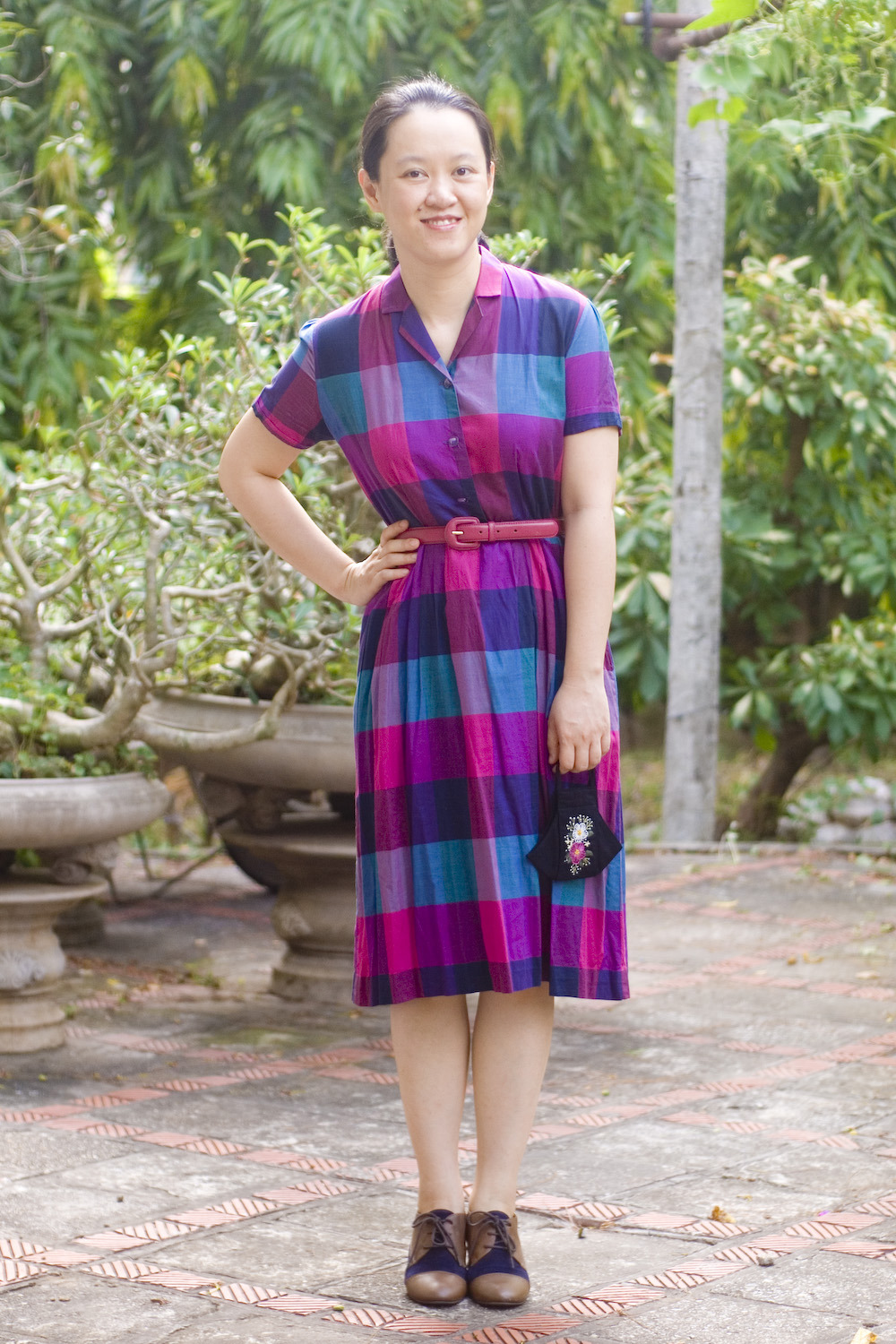 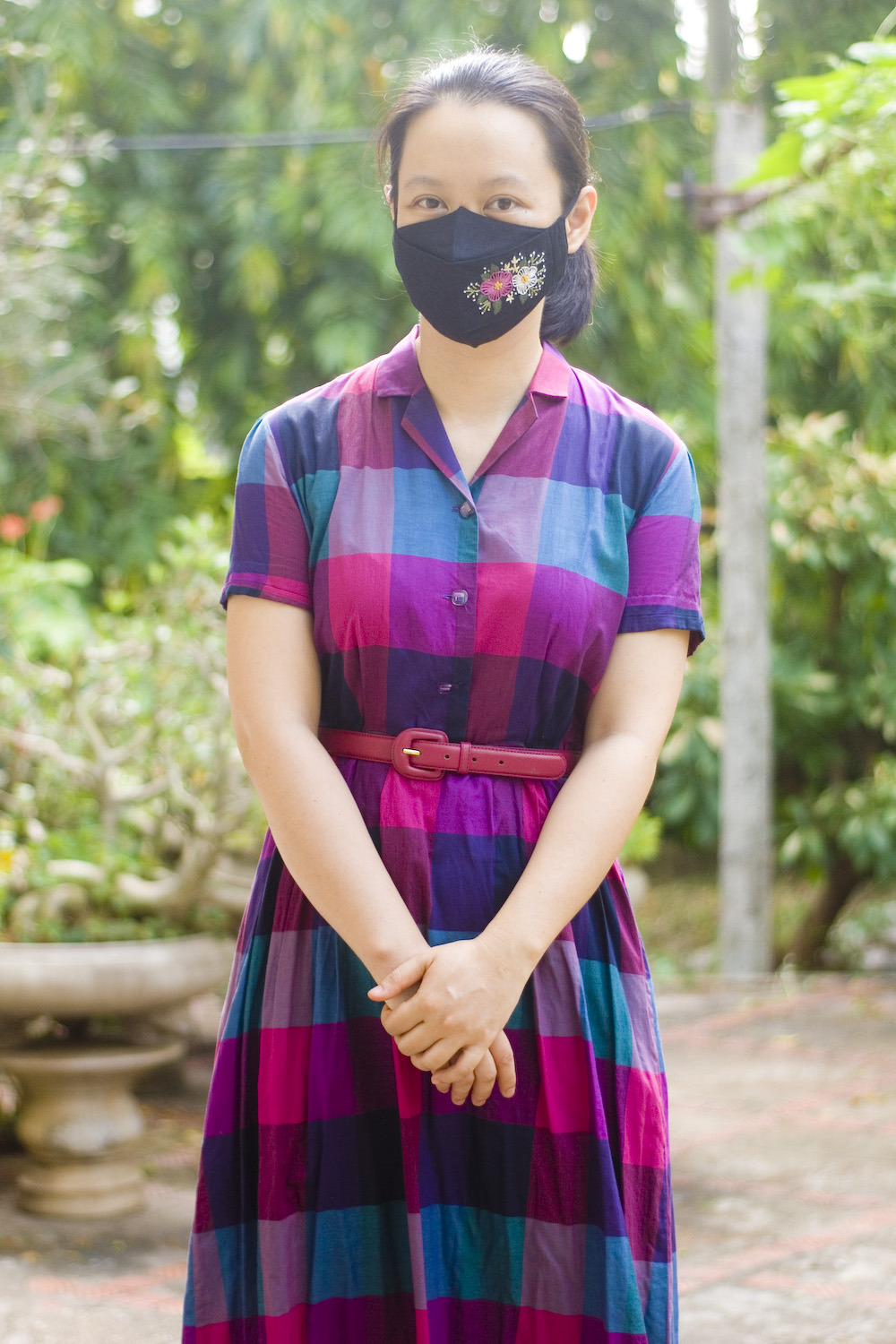 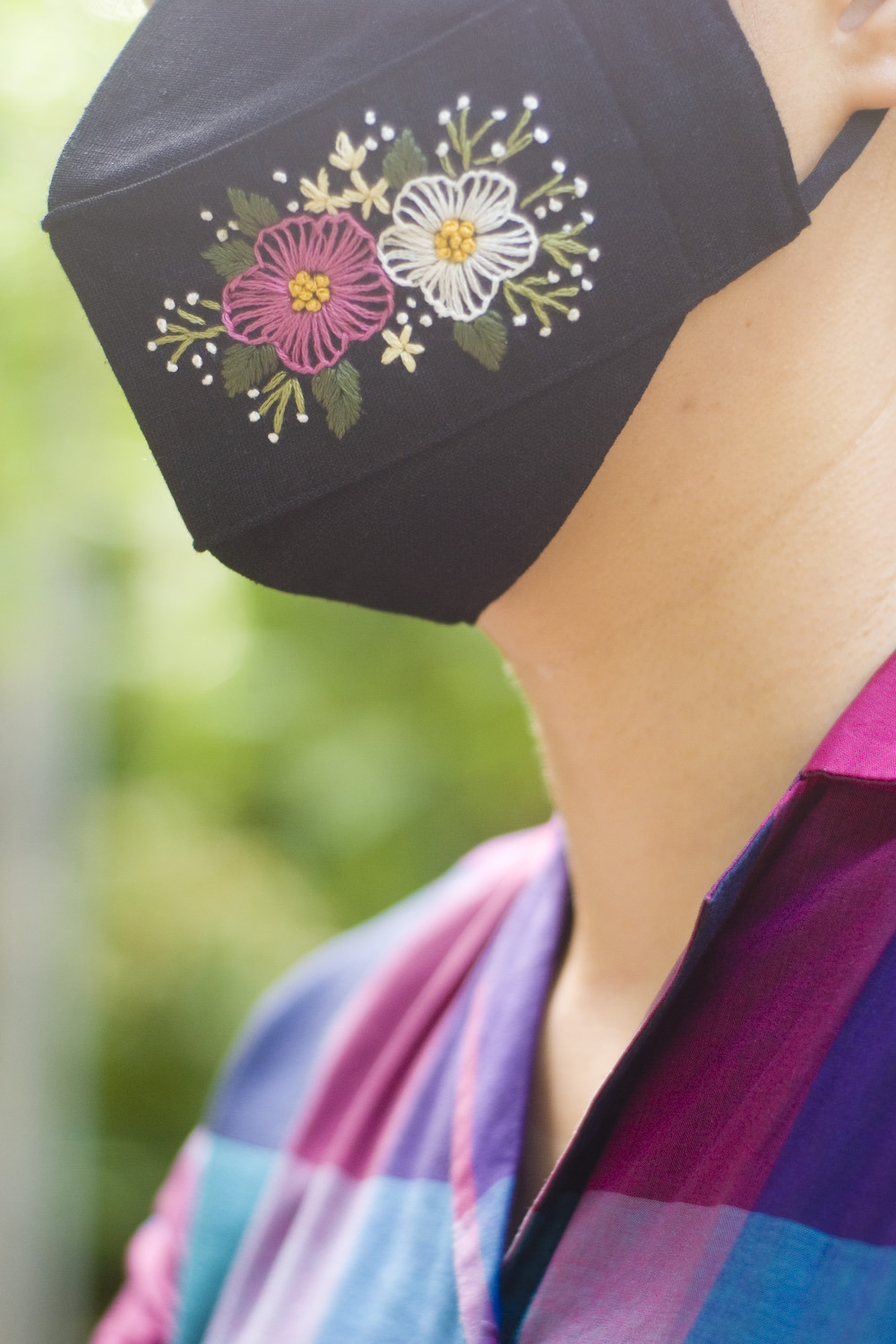 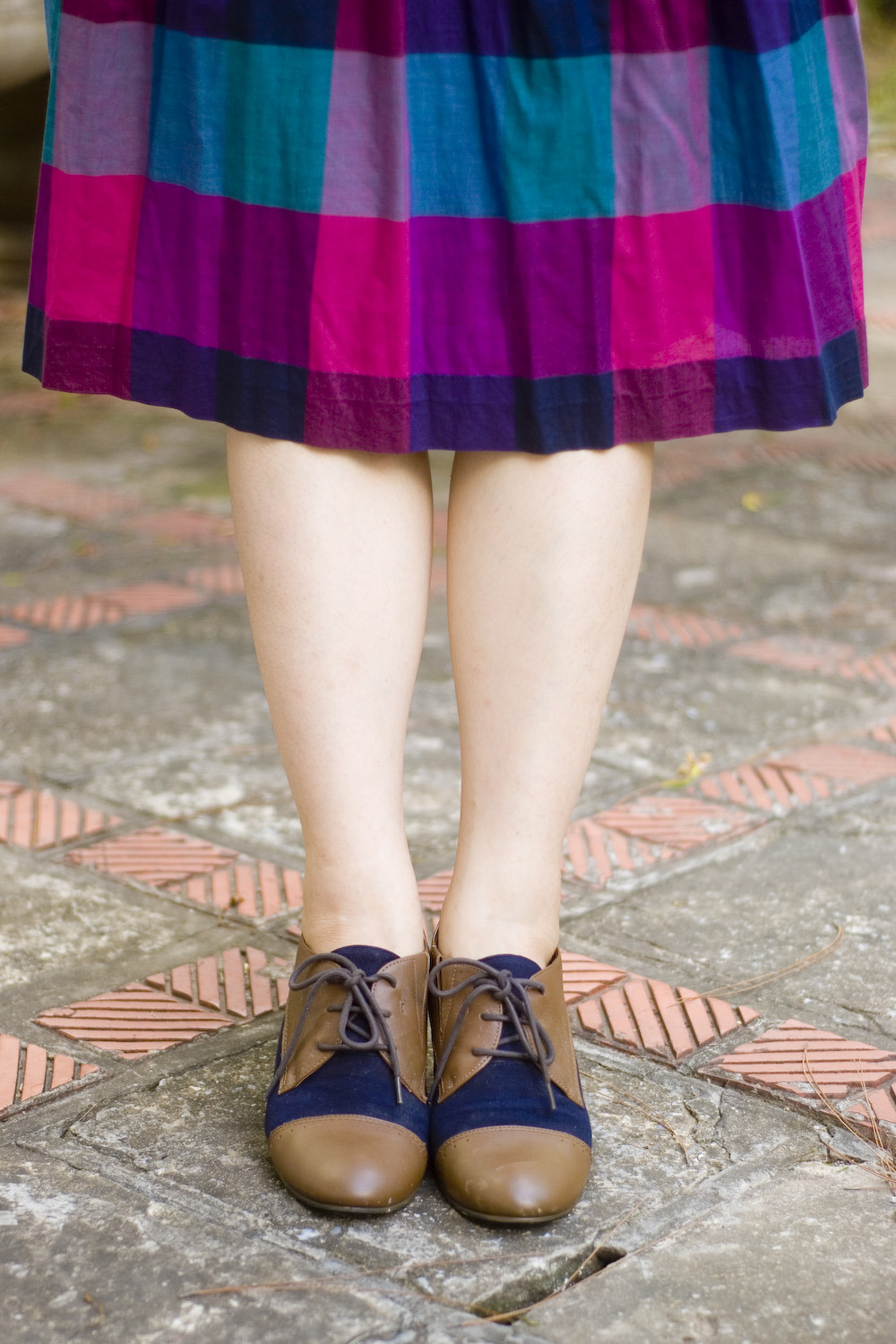 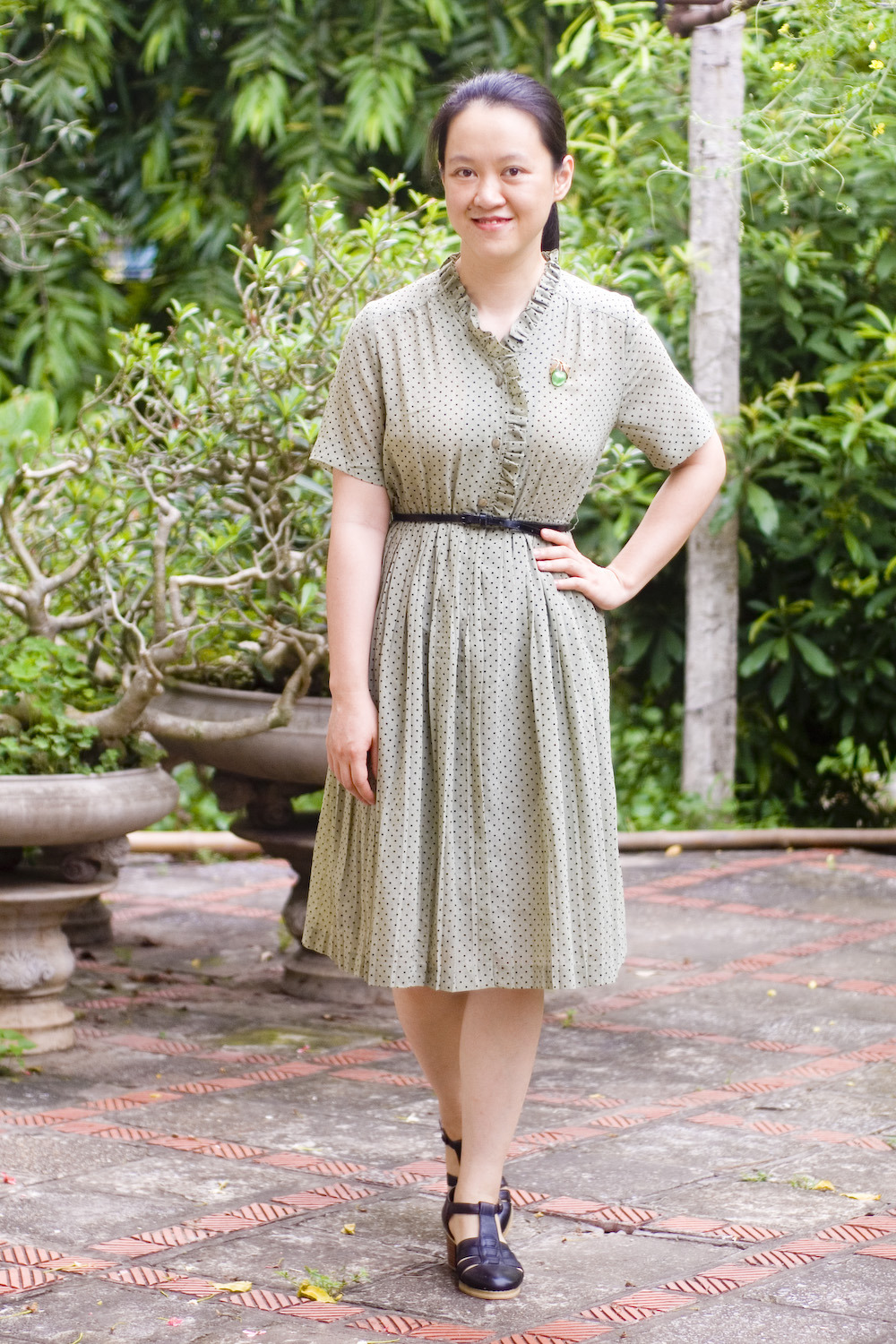 I’m unwittingly going with a green theme this week. I used to believe that I couldn’t wear green because of the yellow undertone of my skin (there’s a saying in Vietnamese that translated to “as green as a tree frog’s ass”, which is used to describe someone’s face when they’re ill or sickly – it only applies to faces, I don’t know why – and I believed could also be applied to me when I wore green.) But as I played around with different tones, I realized that I could wear green after all – it just depends on the tones. I can do moss, emerald, and olive (basically, either earth-tone or jewel-tone green), but ironically enough, though the post is titled “Apple Green”, I can’t wear apple green. It’s simply too bright for me. I’ll just have to resort to wearing it as an accessory instead. 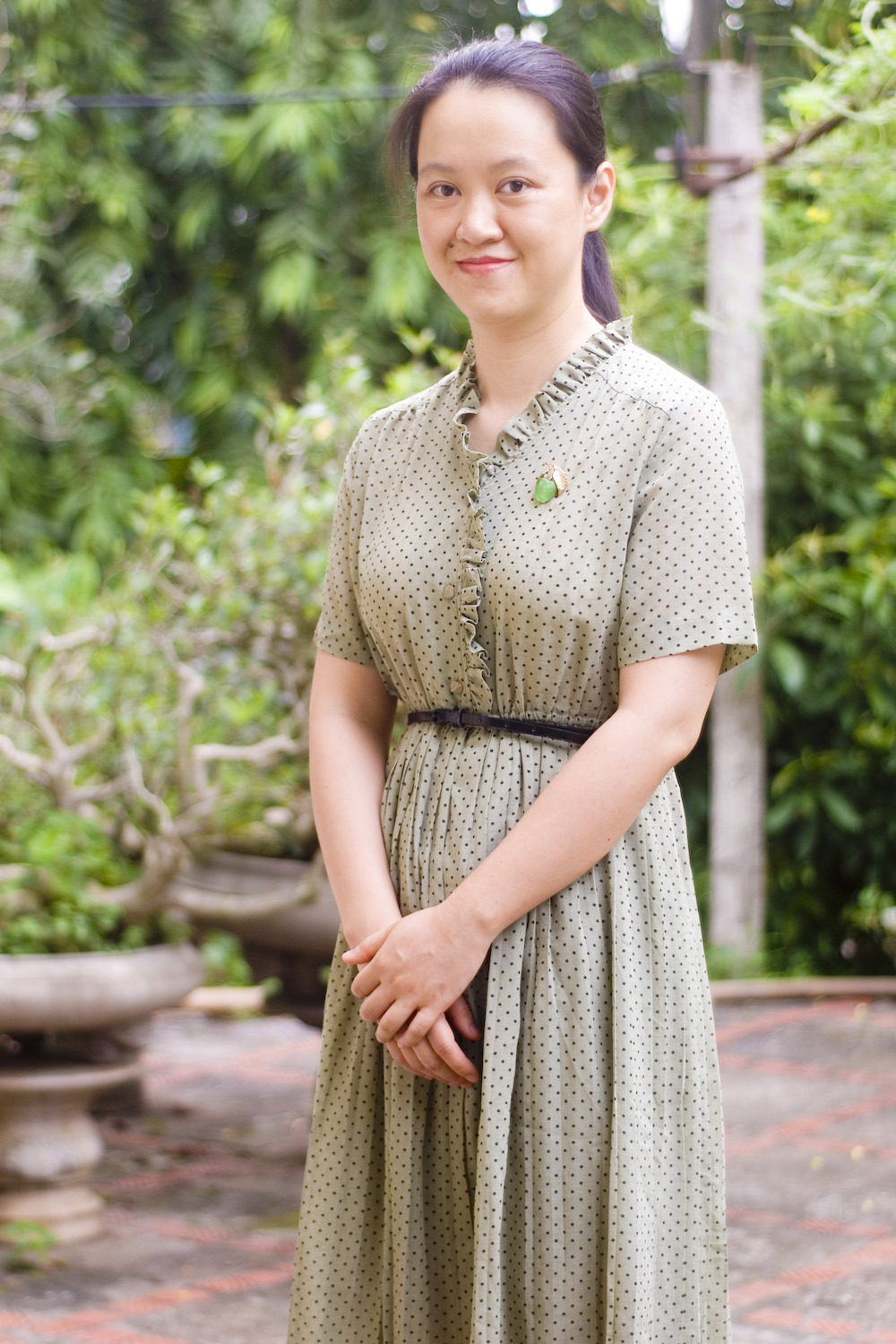 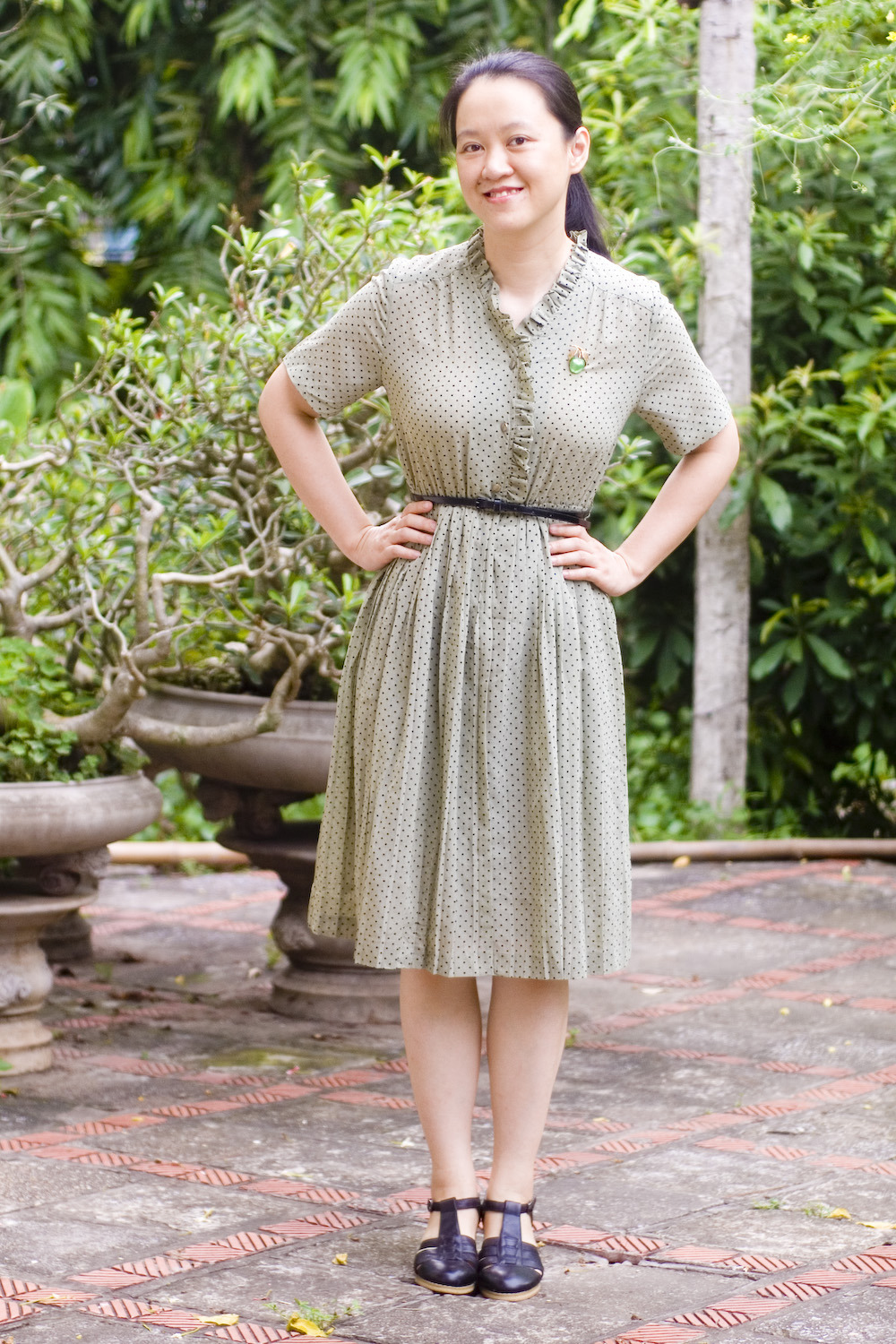 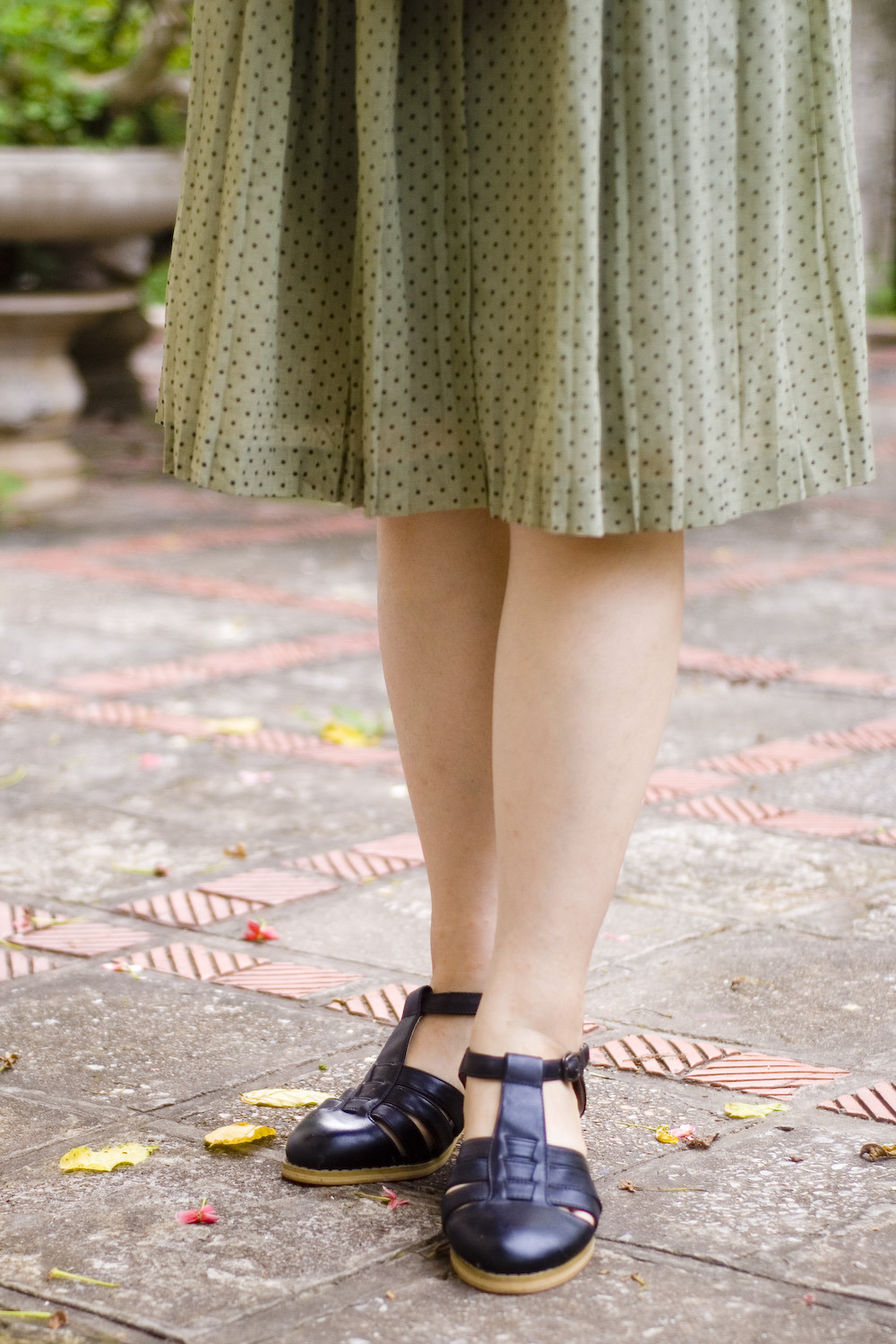 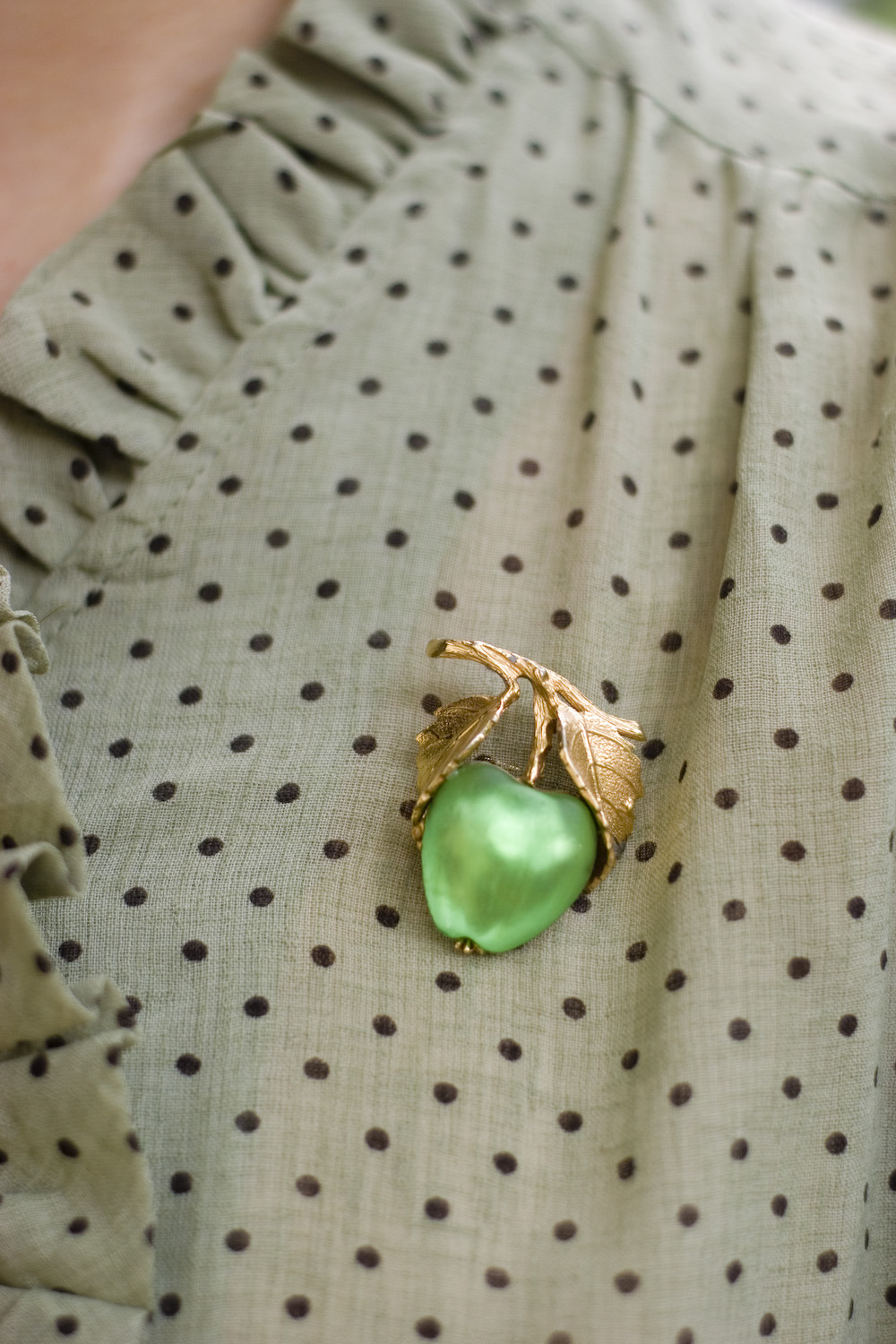 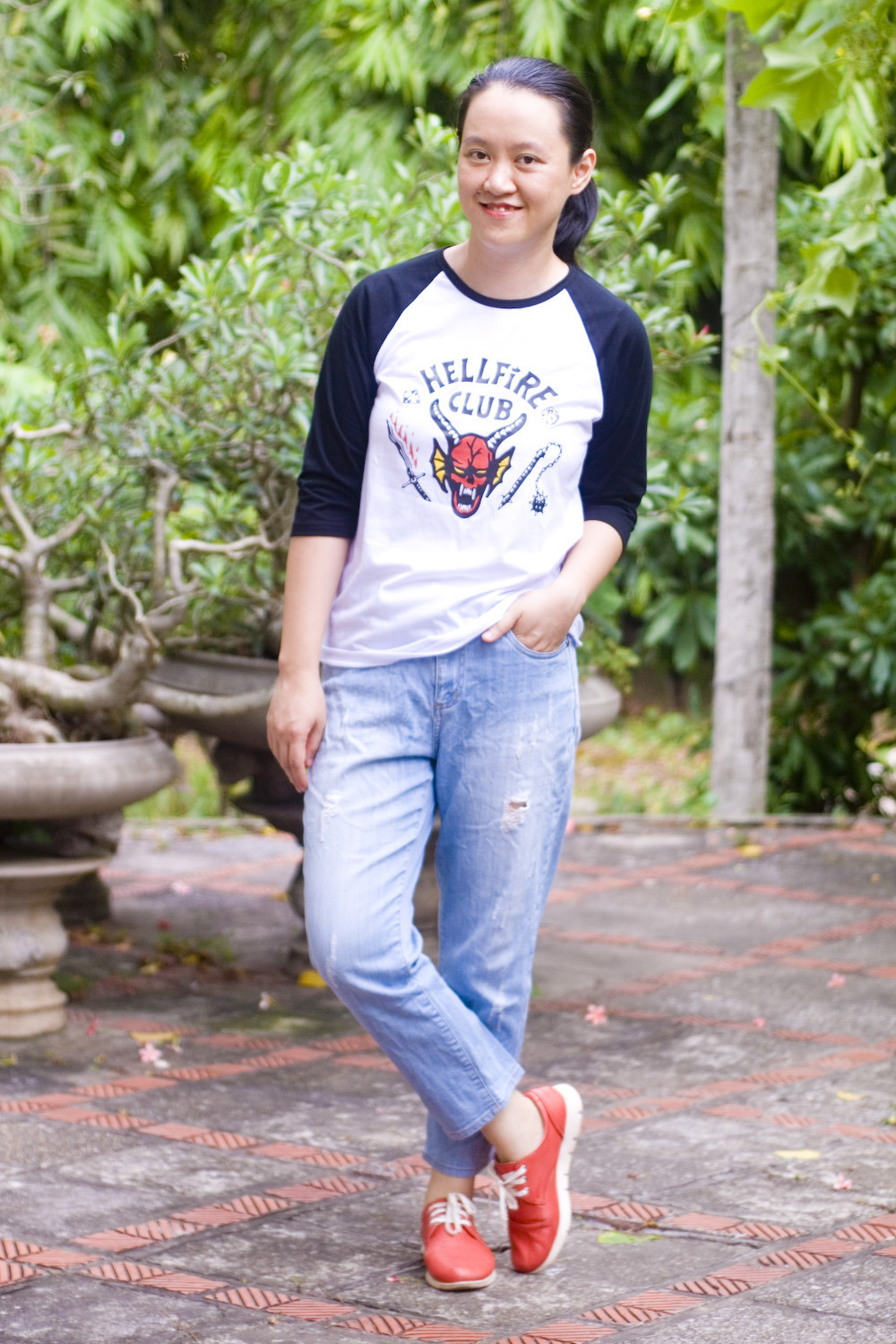 Ever since season 4 of Stranger Things dropped back in late May, I – and most of the world, apparently – have succumbed to the charm of Eddie Munson/Joseph Quinn (because let’s face it, most of Eddie’s charm comes from Joseph’s performance.) I’ve never been invested in Stranger Things – I’m more than a casual viewer, but I wouldn’t say I’m a huge fan, and especially with the long gap between season 3 and season 4, my interest had dipped. When season 4 came out, I watched it just to see where the story went. Little did I know I would become obsessed with a character and the actor on a level I haven’t been since Richard Armitage as John Thornton in North & South. I guess the character resonates with me so much because I was pretty much Eddie in high school – I was that combo of nerd and metalhead (I listened to nu-metal, but still), and I was an outsider who reveled in that status because I didn’t feel like I belonged. And yes, his death hit hard (I’m sorry if that’s a spoiler for you, but honestly, unless you’ve been living under a rock…) I rarely cry at movies or TV shows, yet I was pretty much in a daze for an entire weekend after the finale because I was so upset.

So for my birthday, I thought I’d treat myself to a Hellfire T-shirt. The outfit is super simple – it’s not an Eddie cosplay (I’ve never been interested in cosplaying; I prefer to take inspiration from a look and put my own spin on it), but I guess you can say the distressed jeans and the sneakers are a nod to Eddie’s iconic look, and the whole thing is definitely an homage to the character anyway. Eddie, this is for you. 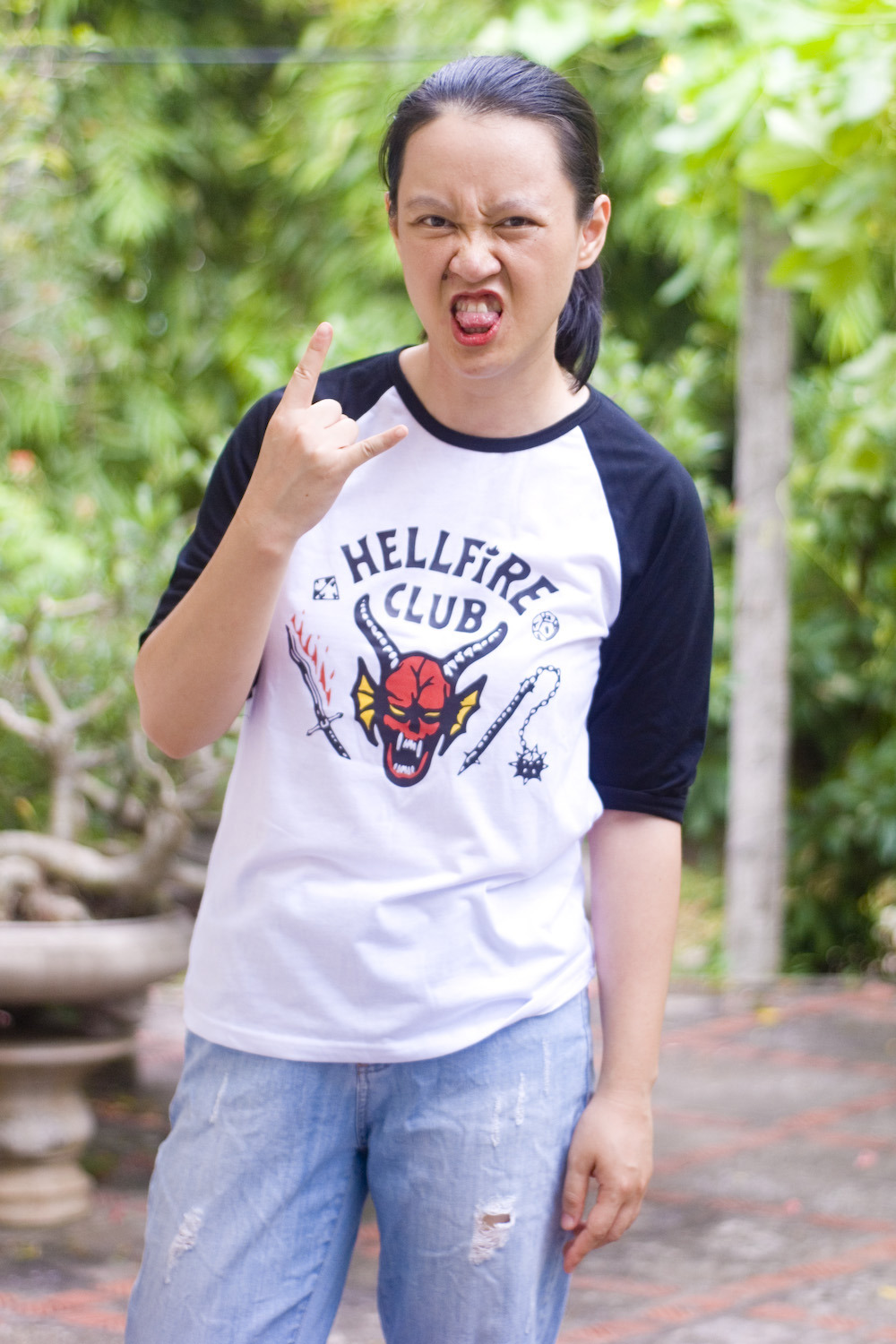 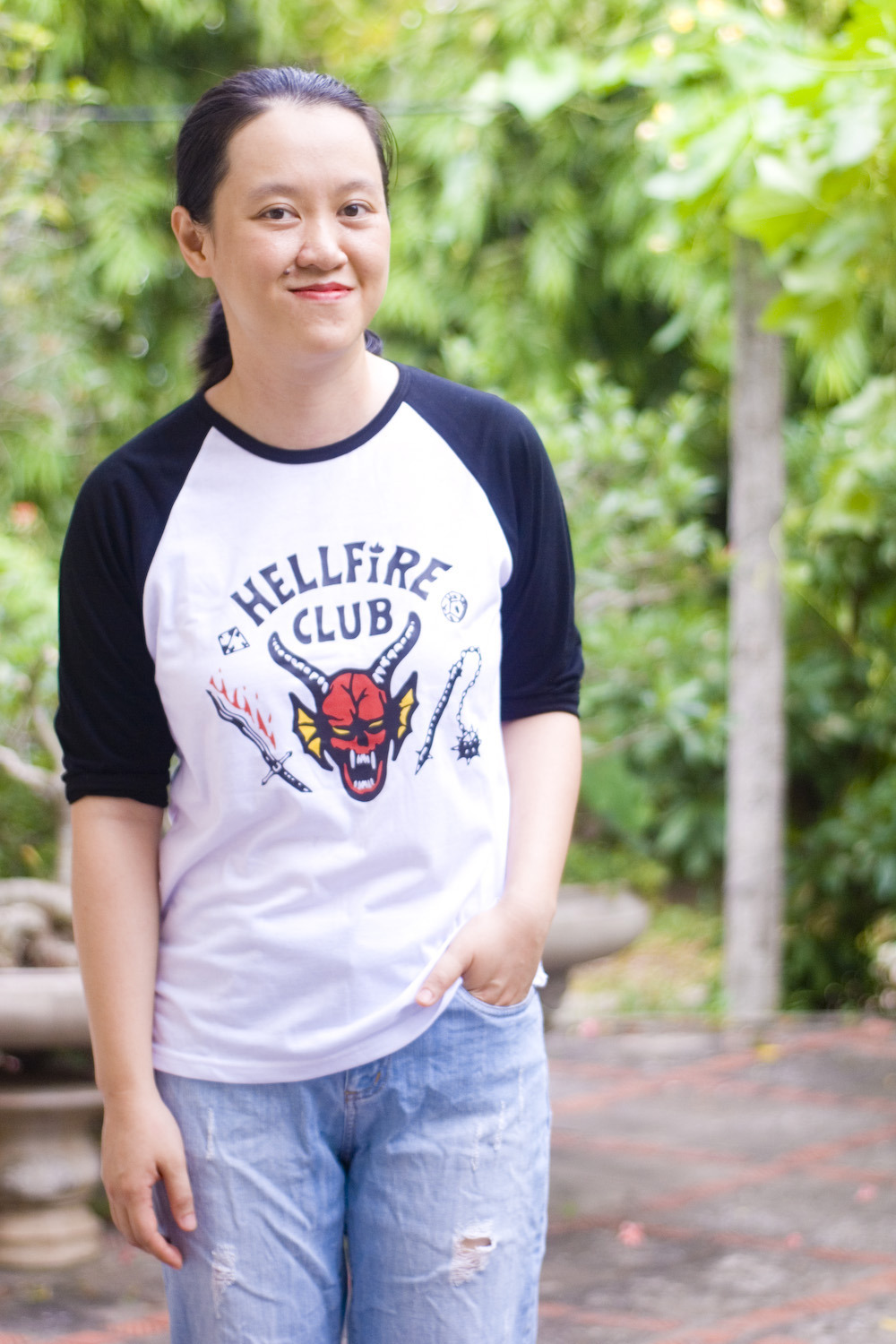 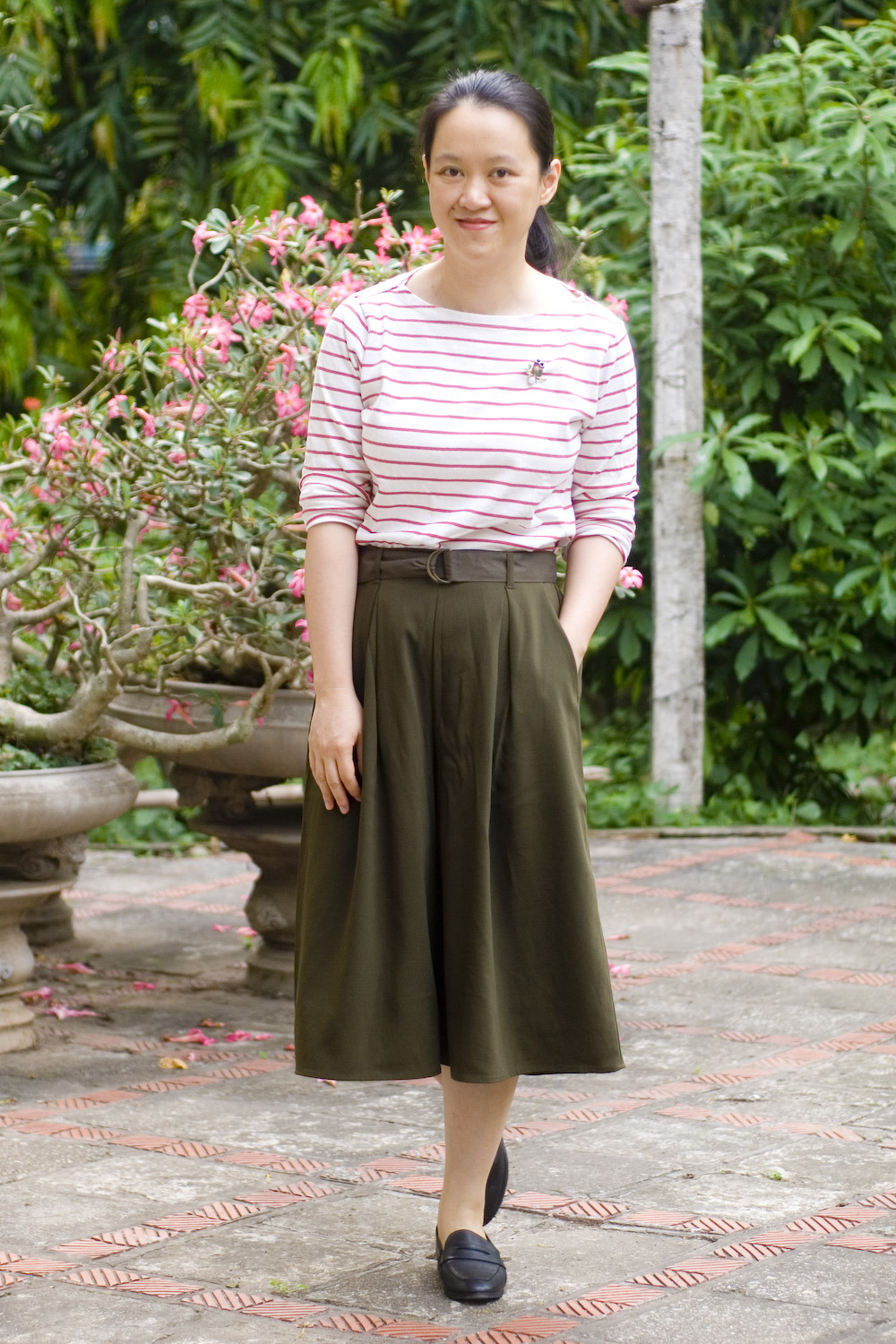 This is a very basic outfit, right down to the owl brooch (owl, for some reason, was the motif of the early 2010s, the height of Modcloth and the twee-as-fuck style à la Zooey Deschanel, so I always associate it with “basic hipsters”.) The outfit is actually built around this faded red +olive green color combo, which I’ve wanted to try for a long time, and the shirt looks bare, but I couldn’t think of what brooch to wear, so I settled for a “basic” one. Ah well. At least it’s cute and doesn’t clash with anything. 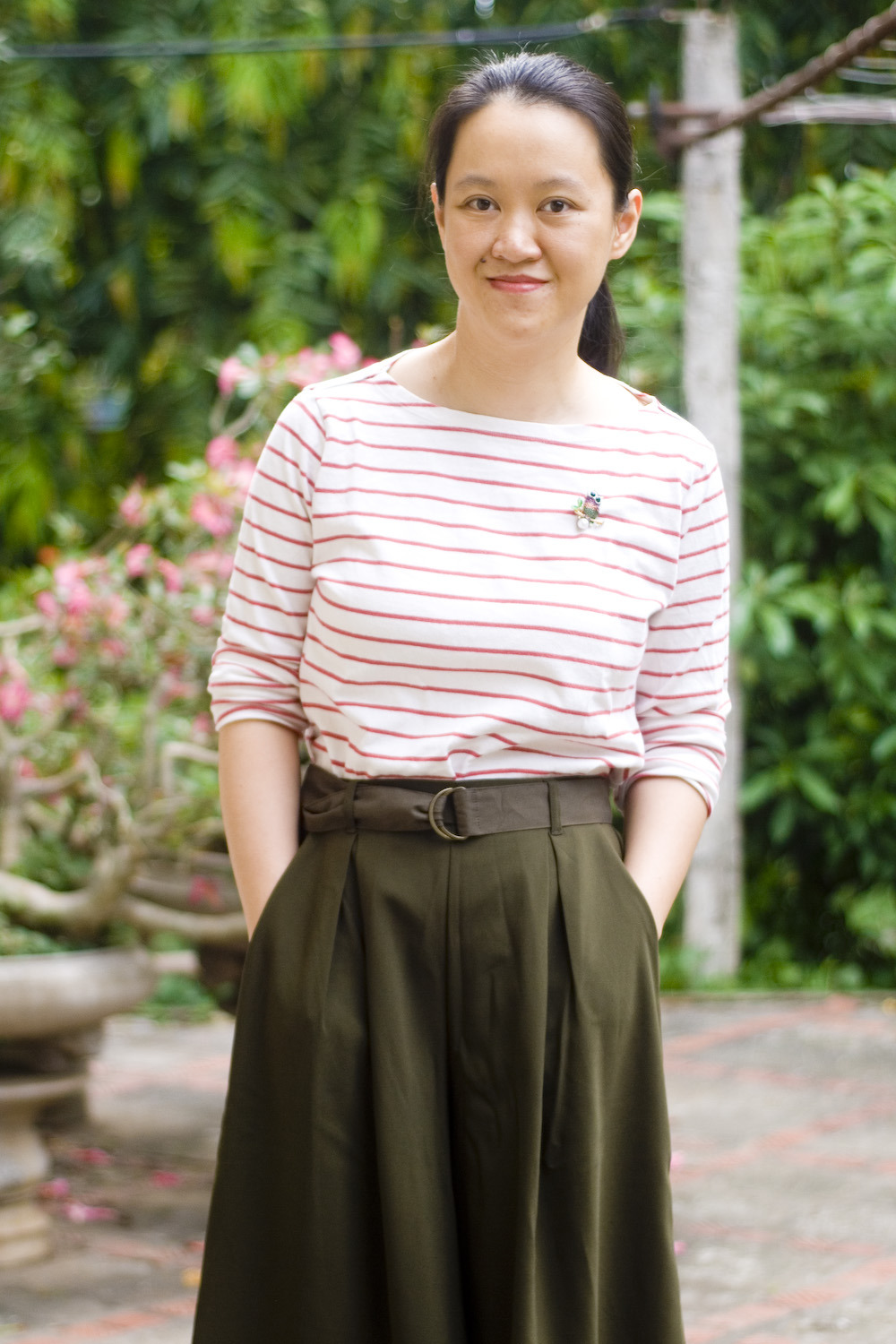 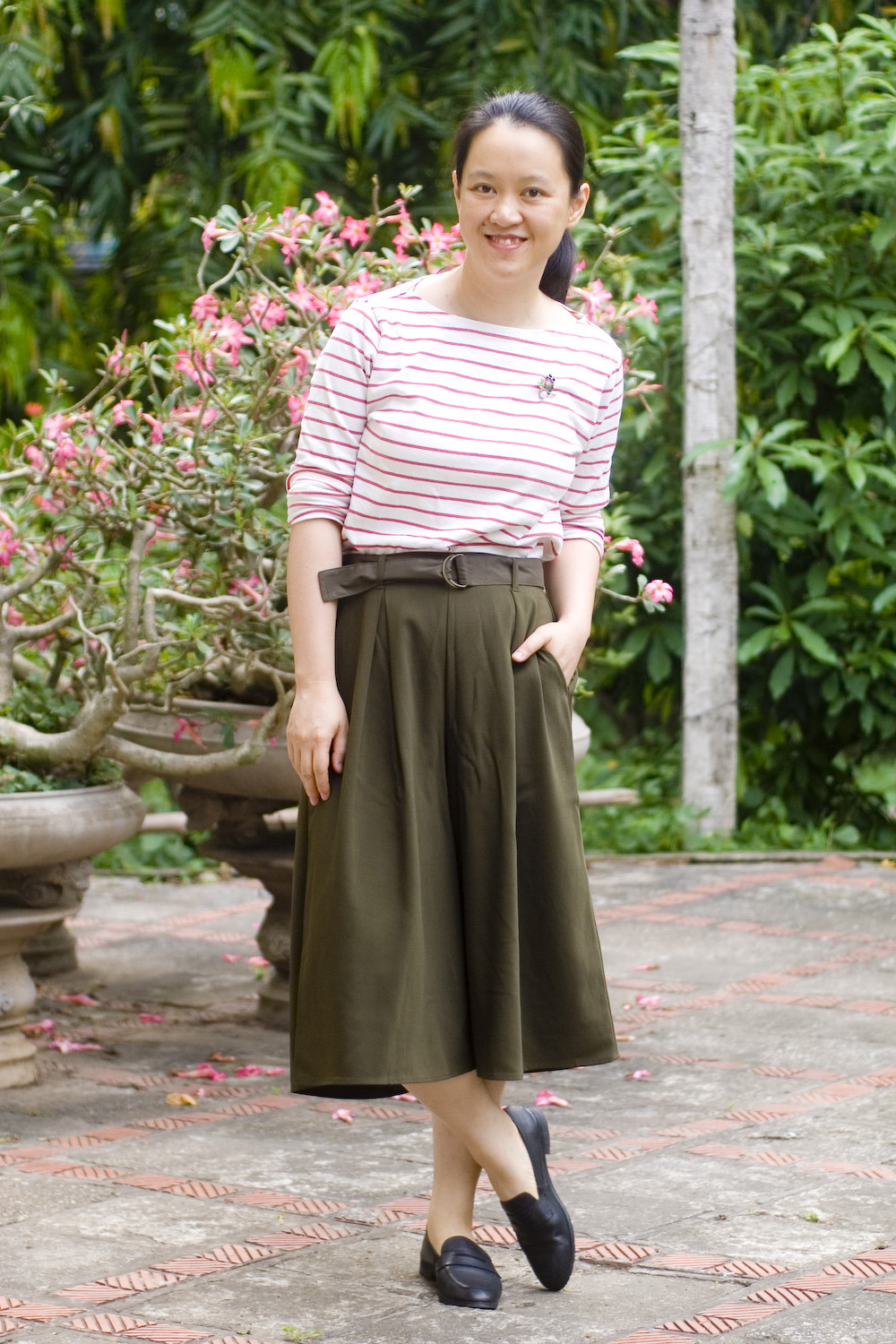 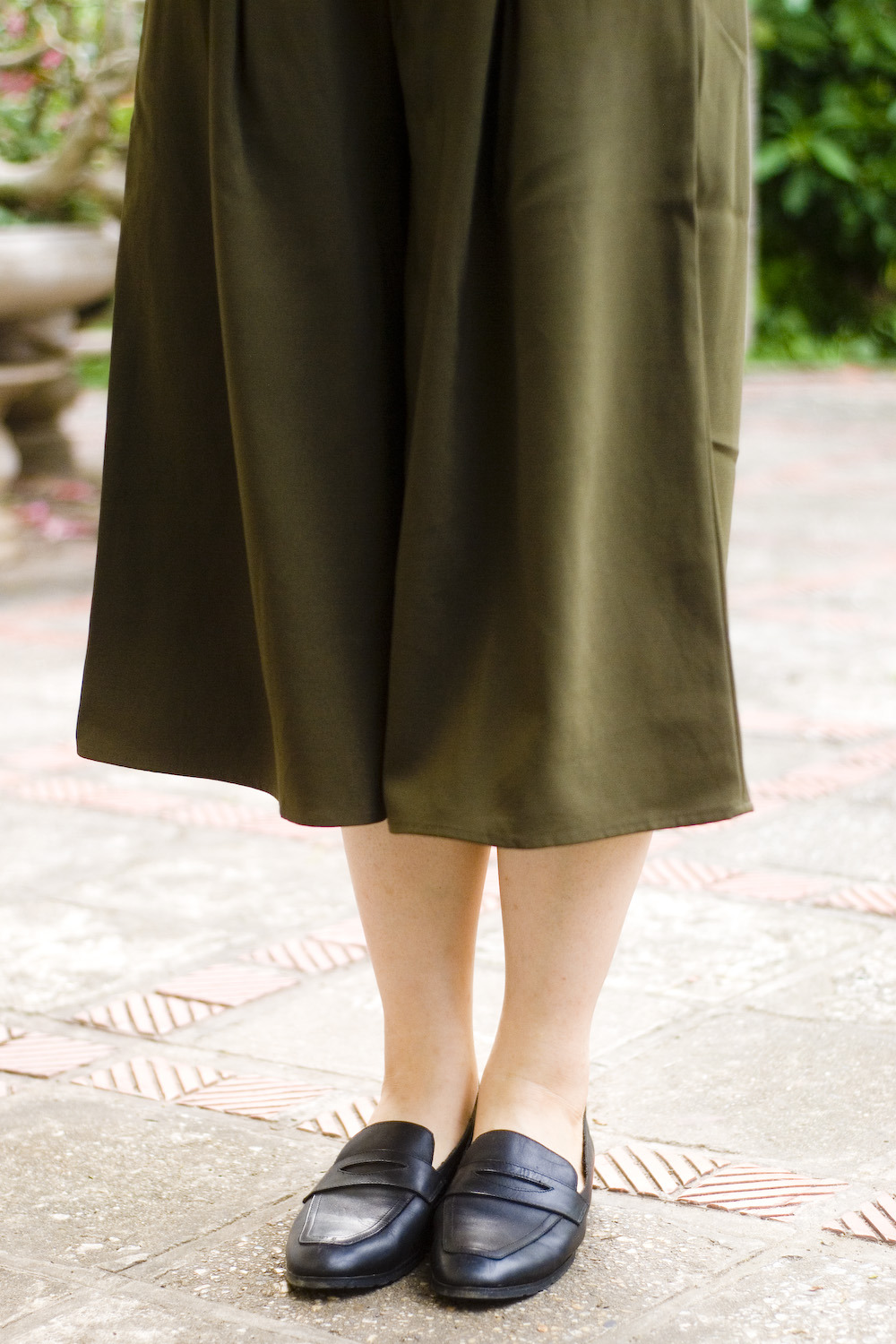 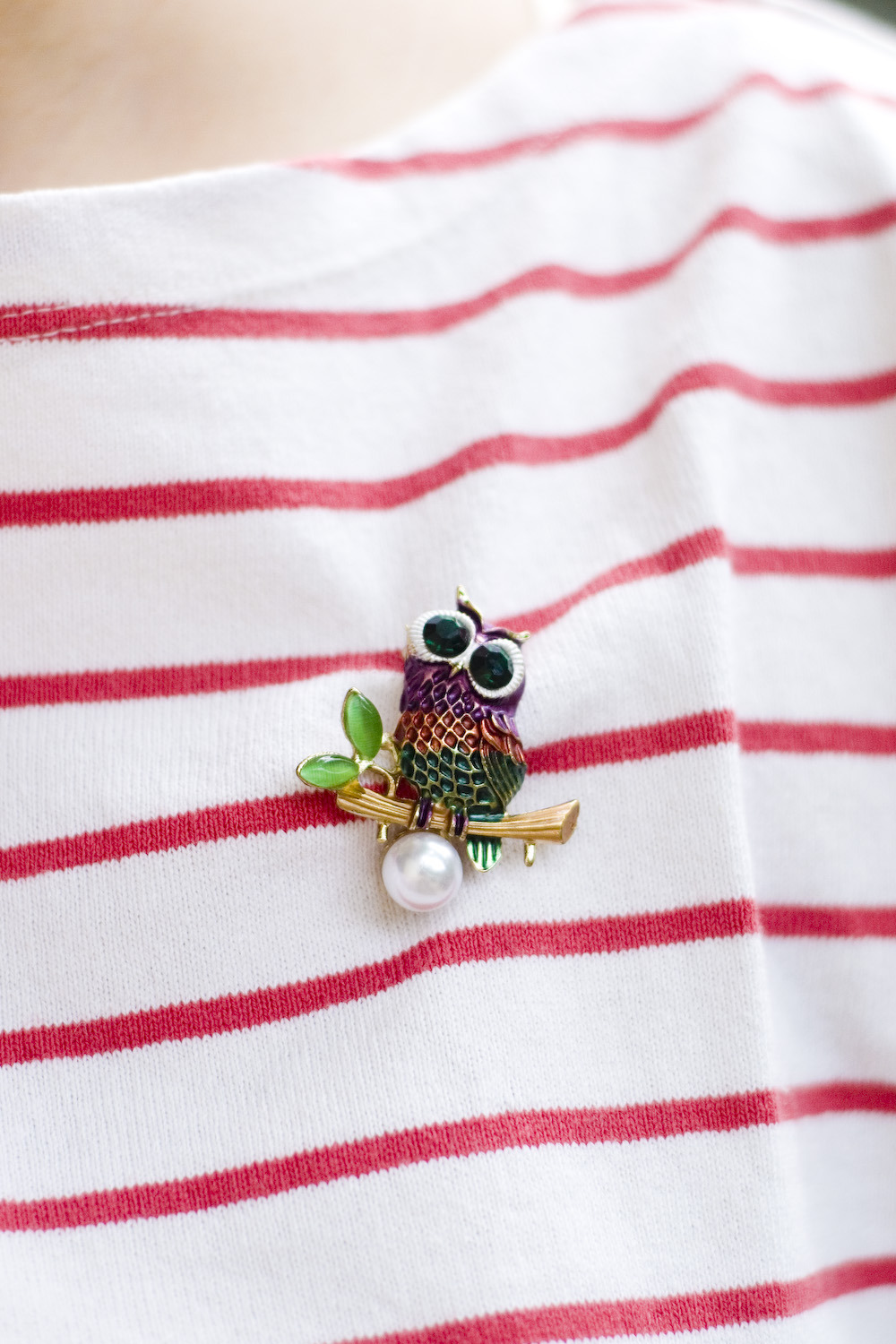