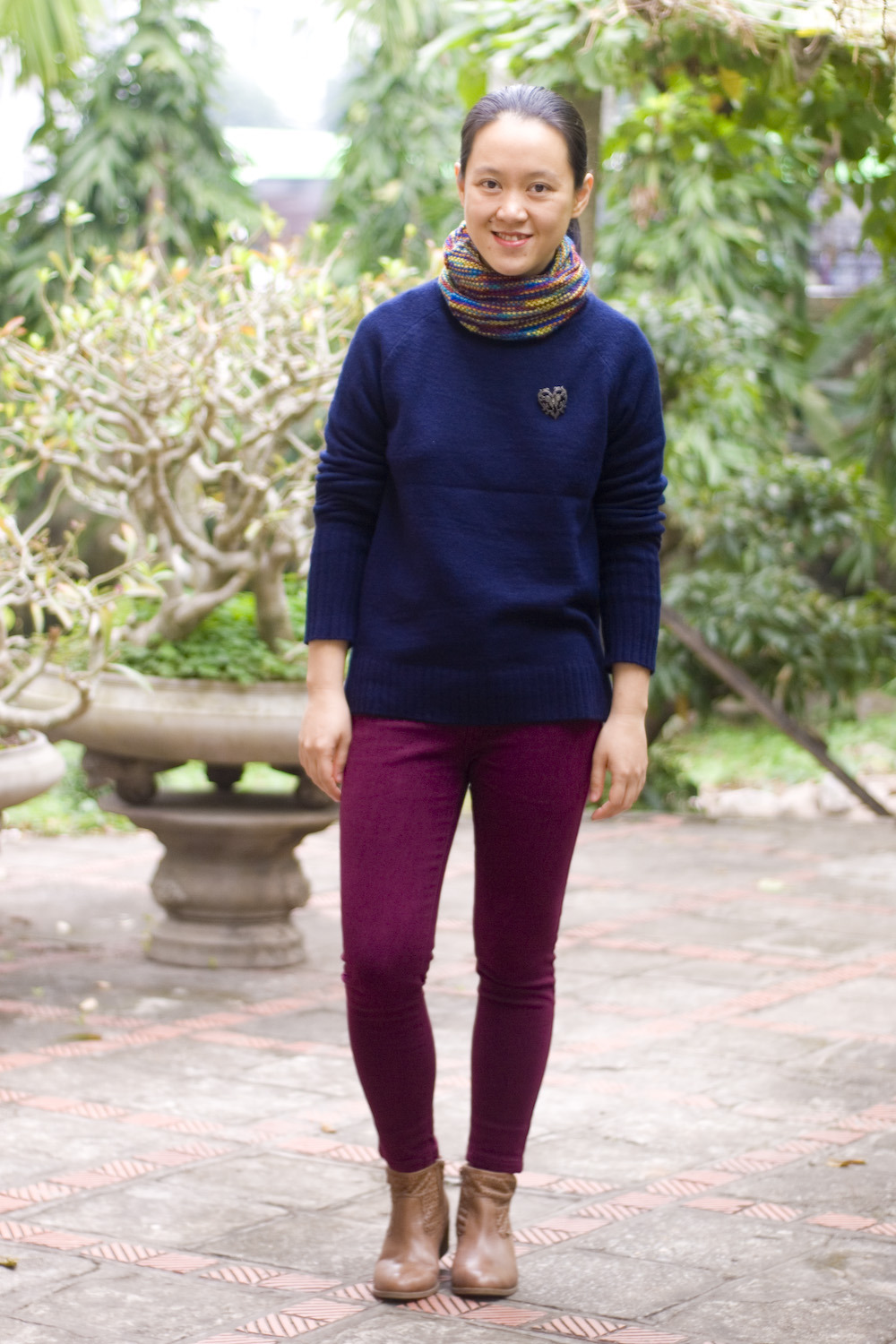 Here’s my interpretation of this week’s SIA inspiration, the tapestry “Damunt de tu només les flors” by Spanish textile artist, Carles Delclaux Is. At first, the colors really stumped me, until I remembered my maroon jeans – though it is more red/brown than purple, it is OK for the background of the tapestry. The exuberant patterns are also a challenge, but by a stroke of luck, I just bought this rainbow-colored neck buff, which is perfect (it also works as a beanie.) To top it off, I added my heart brooch to reflect the heart motif. It doesn’t go that well with the rest of the outfit, but it goes well with the tapestry, so I’m happy.

Don’t forget to check Kim’s blog on Wednesday to see other outfits inspired by this piece of textile art! 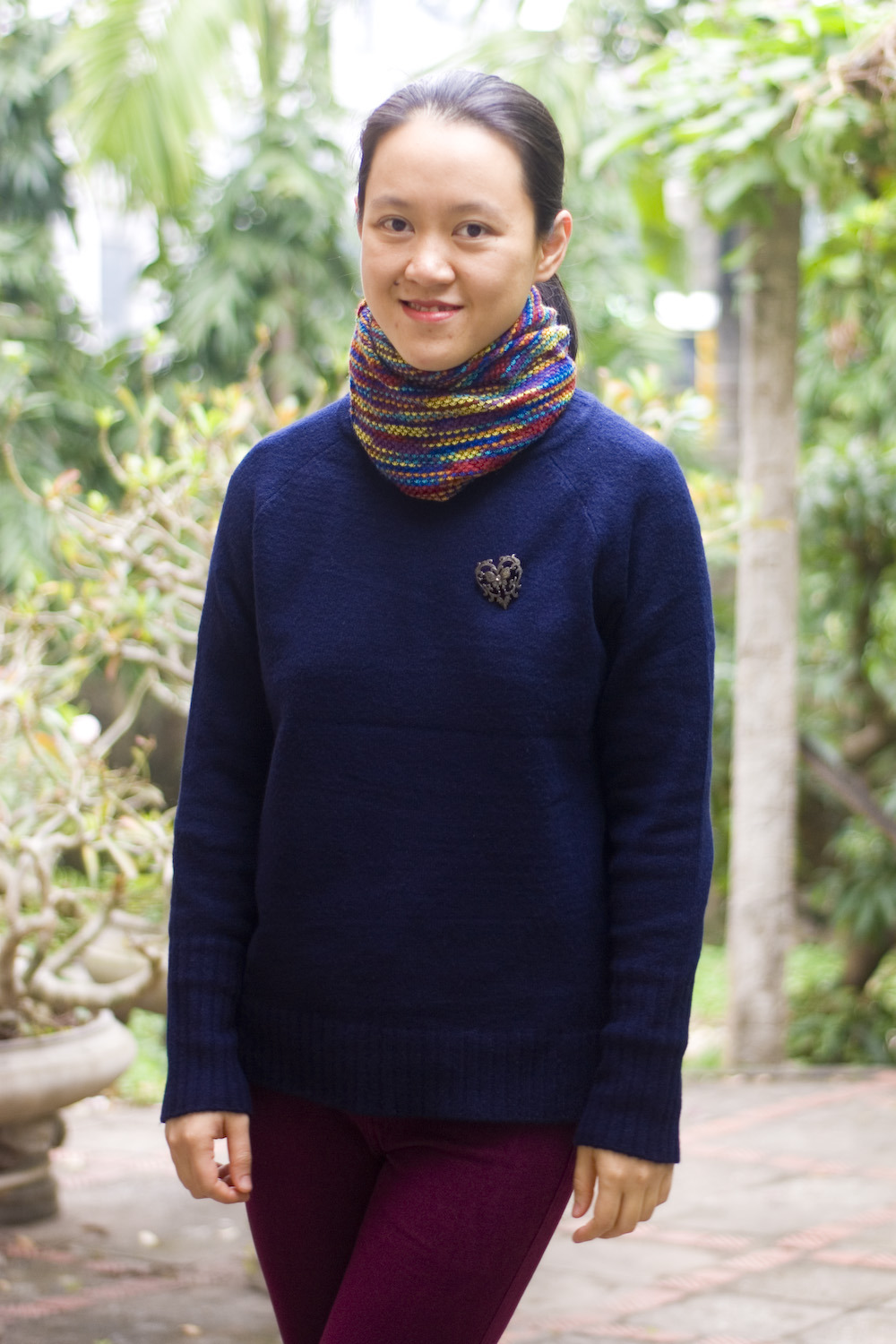 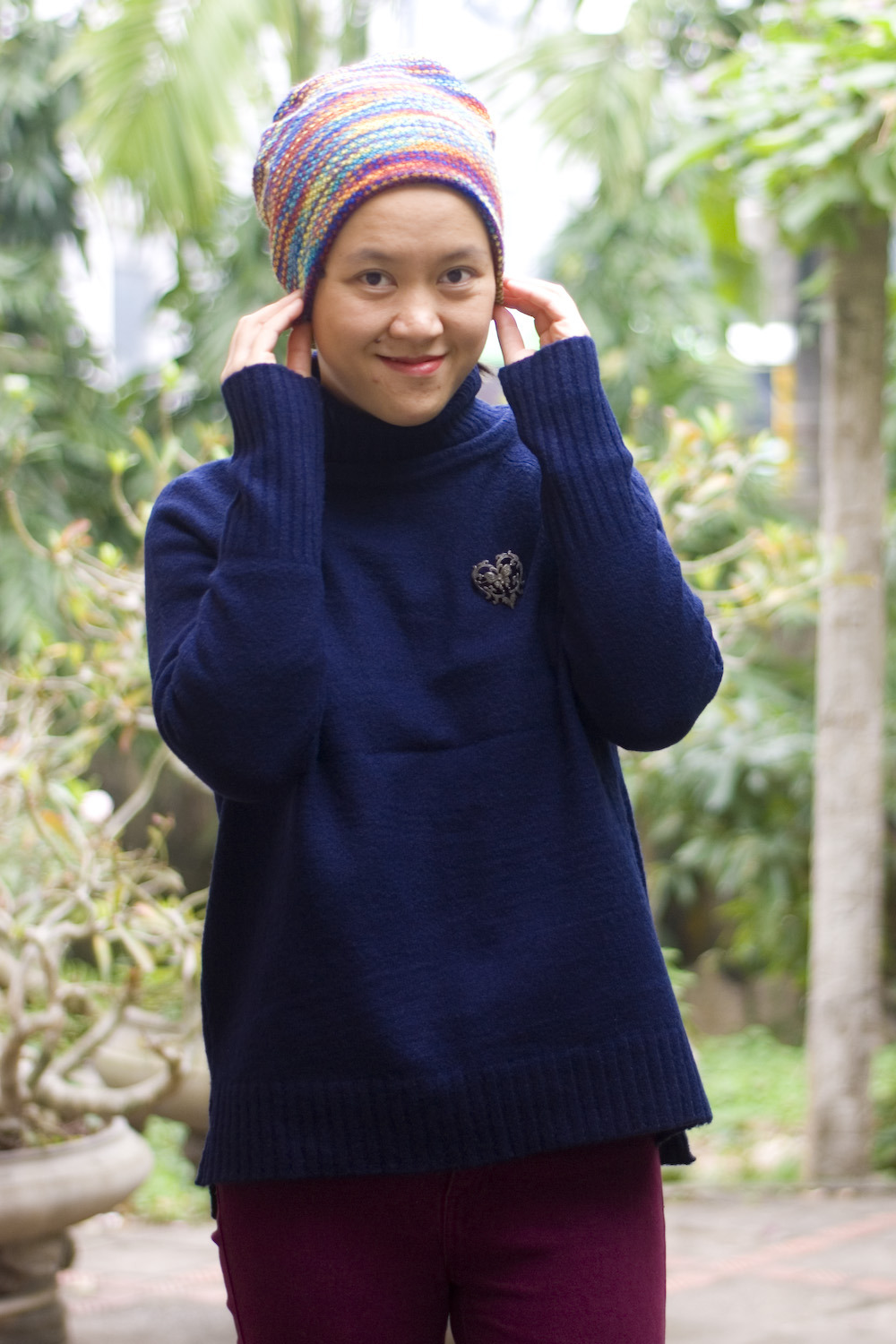 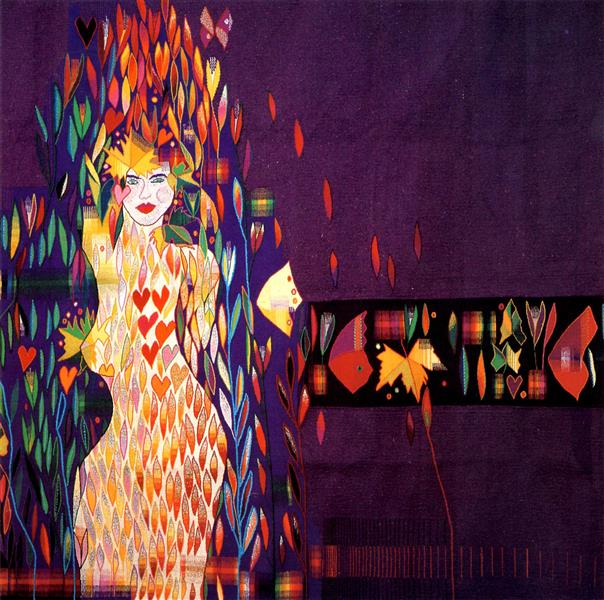 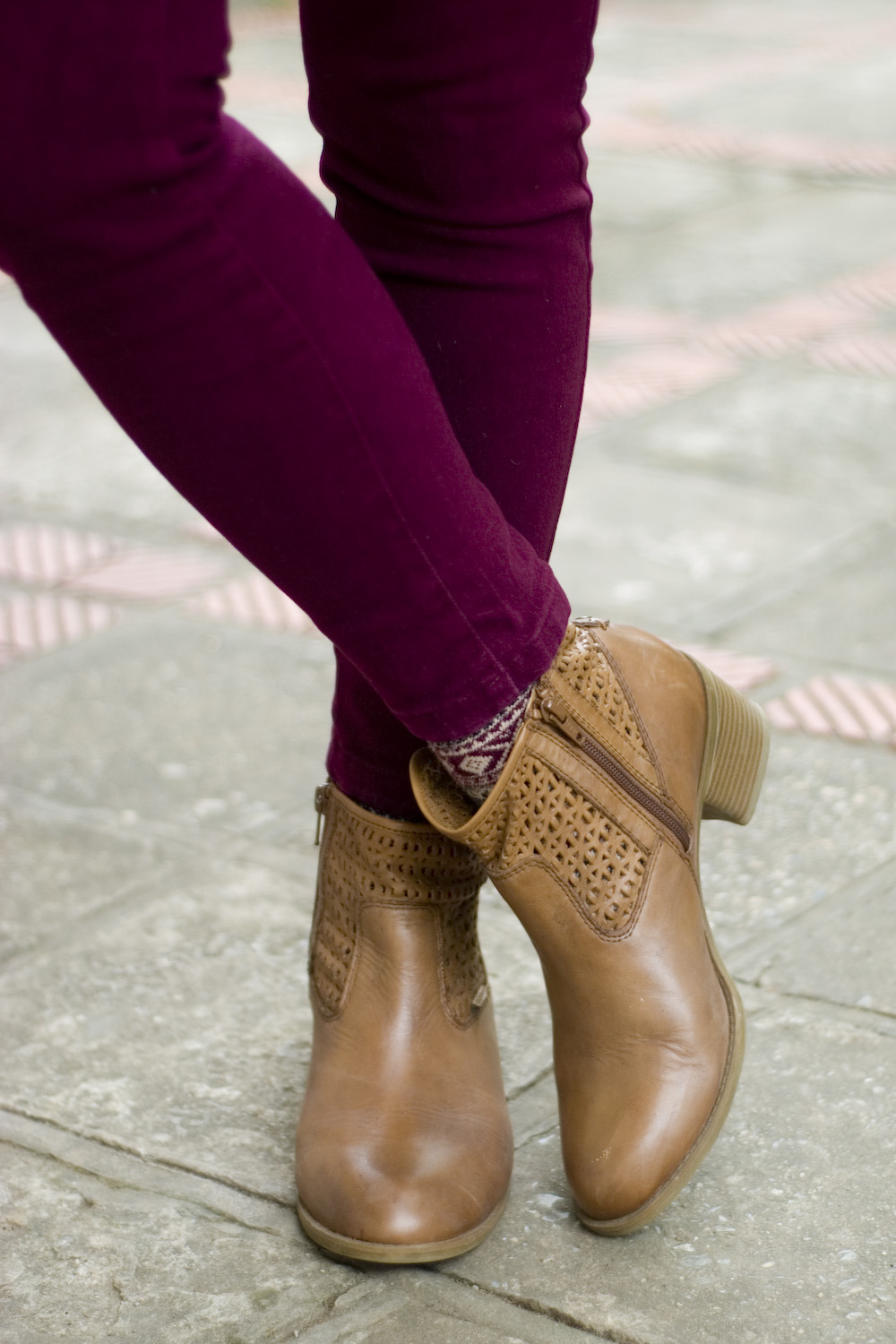 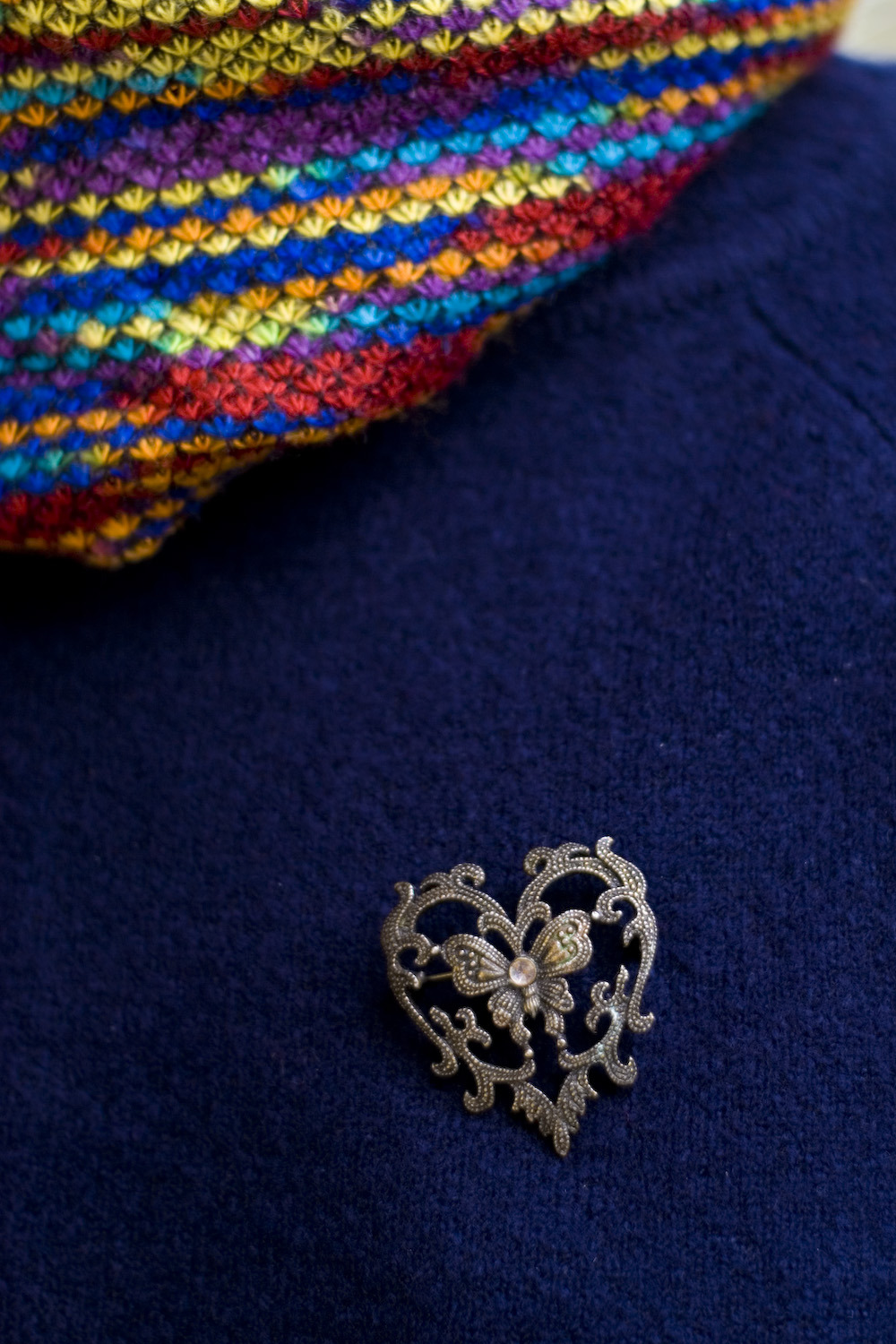 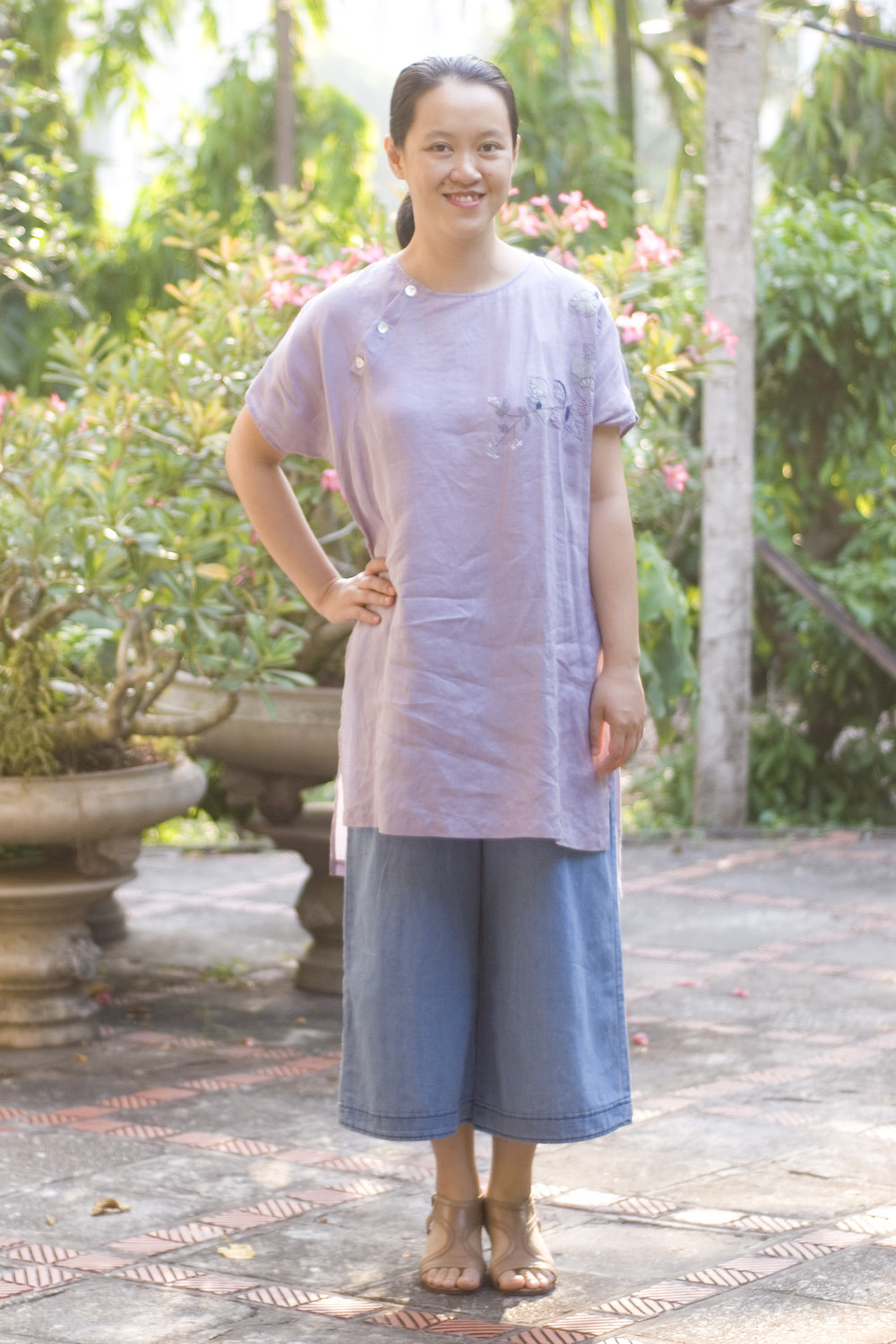 This tunic is what I call a “one-trick pony”, meaning I only have one way of styling it – with a pair of skinny pants or jeans. However, after looking at the lookbook from the boutique where I got the tunic, I saw a number of similar tunics paired with culottes, so I decided to give it a try. To my surprise, I quite like it – it has echoes of the traditional Vietnamese áo dài, which consists of a long tunic worn over a pair of wide-leg pants, but looks more modern. I guess I can call this tunic a two-trick pony now! 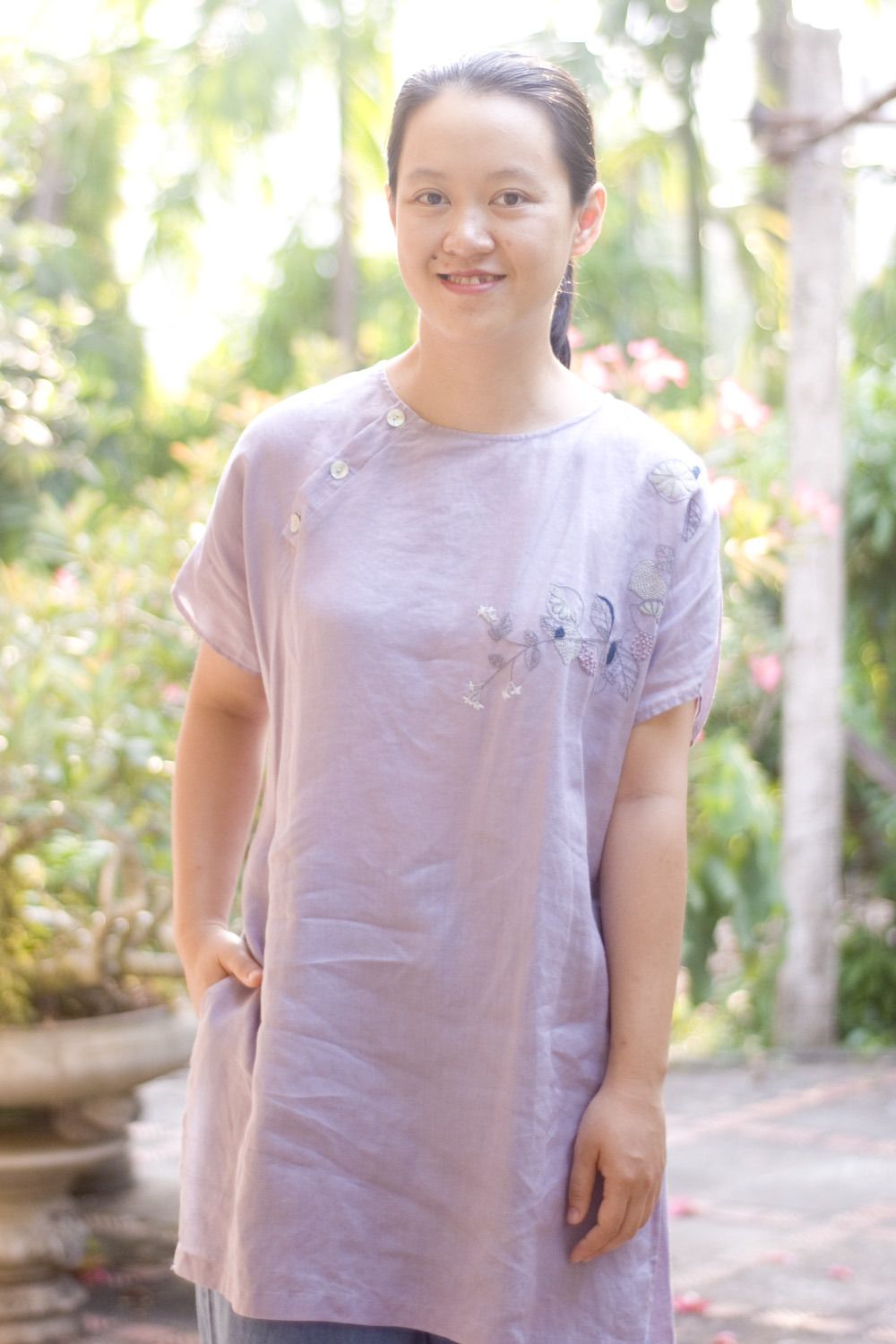 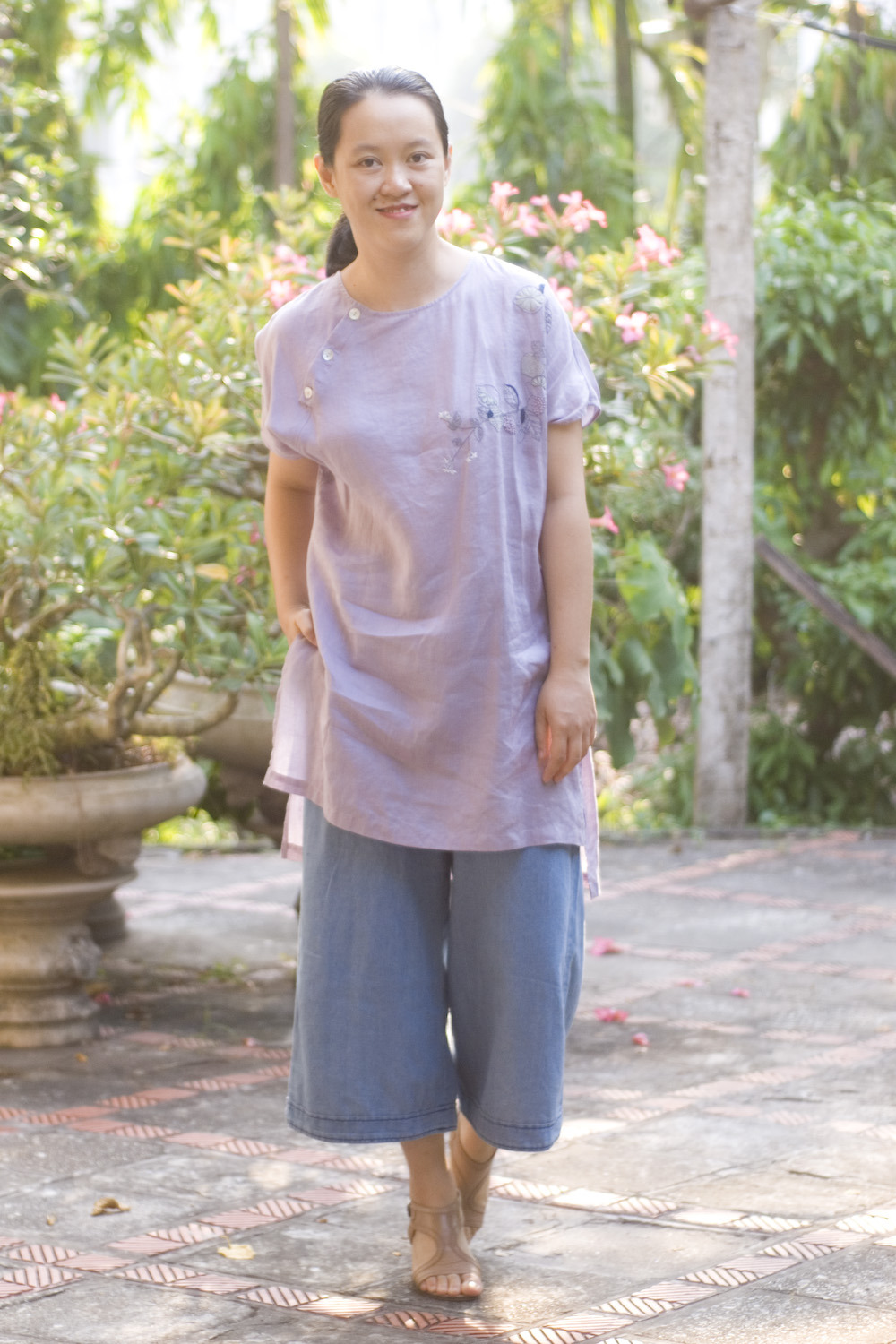 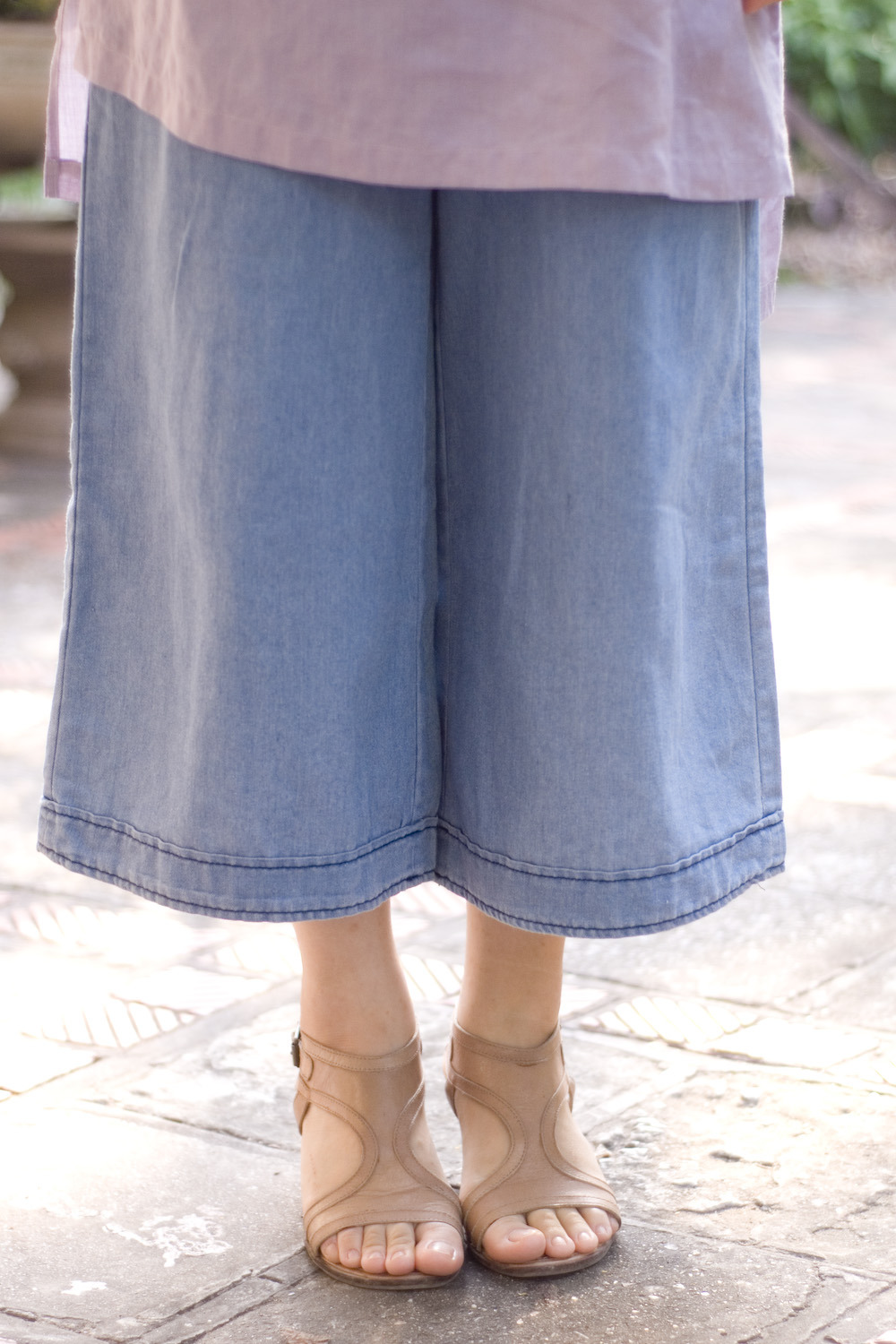 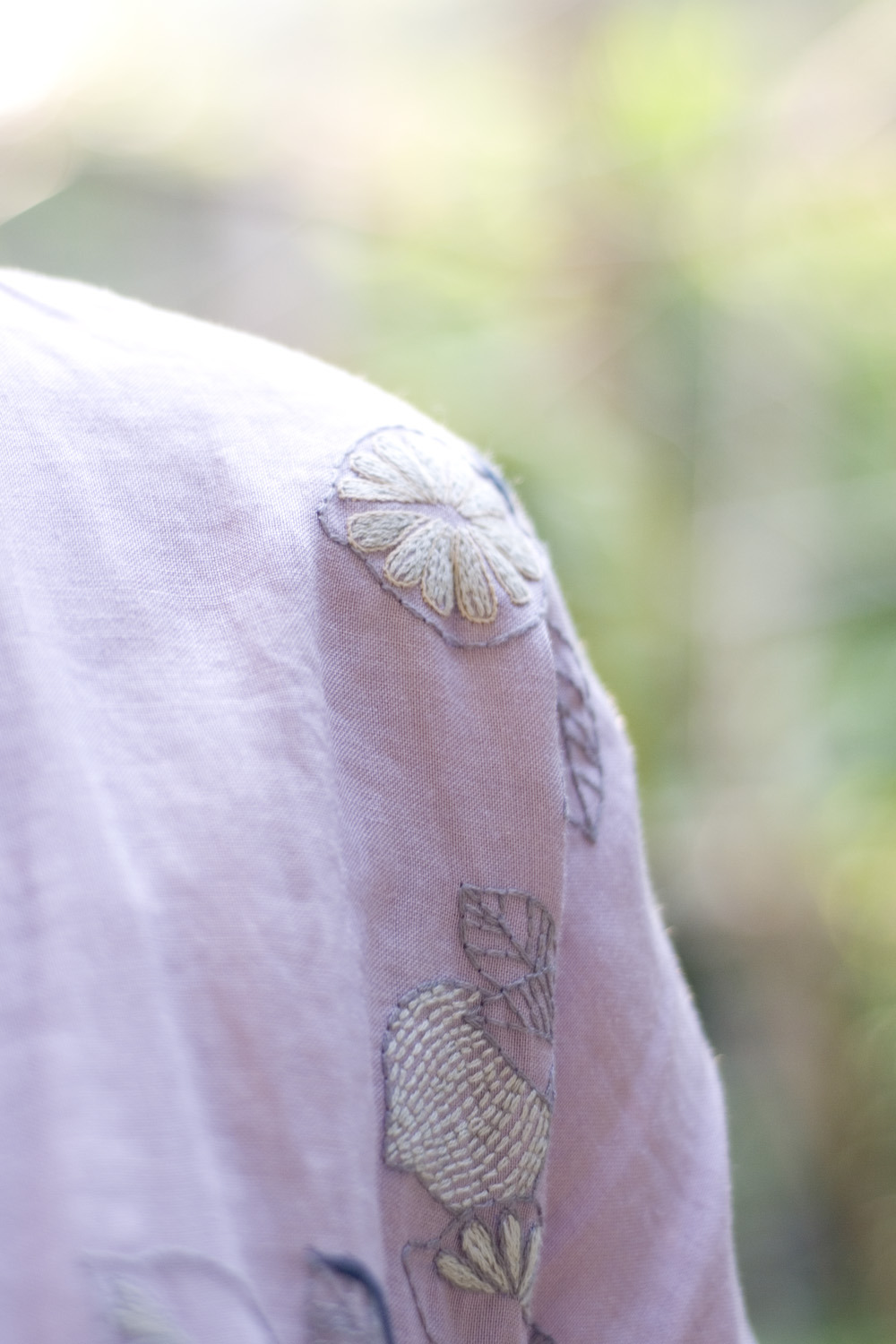 I have a lot of work horses in my closet – staple pieces (I almost typed that as “stable pieces”, you know, since they’re “work horses” and all, but I decided that I’m not old enough for lame puns yet), things that go with almost anything and can be styled many different ways. On the other hand, I also have some “one-trick ponies”, things that I wear a lot but always in the same way. This tunic is one of them. I wear it a lot, but it rarely makes an appearance on the blog, because I style it the same every time – with skinny jeans/pants and flat shoes. In a way, though, that makes them easier to style, because I don’t have to think about what to pair with them.

Do you guys have any “one-trick ponies” in your closet?

After I wore this tunic with jeans for SIA, I thought that the silhouette looks familiar, but I couldn’t place it until I realized it was similar to what Indian women often wear in everyday life – fitted trousers (churidar) with a tunic (kurta). Even the embroideries are reminiscent of the designs on the kurta as well, though perhaps not as elaborate. So today I decided to recreate the silhouette more faithfully, with actual trousers instead of jeans and flat sandals instead of heels. The funny thing is that the outfit can also be seen as a modern take on the traditional styling of the Vietnamese áo dài (which is a long tunic over loose-fitting trousers). But that’s what I love about style – you can take your inspiration from almost anywhere!

Boy With A Coin

Sorry for the radio silence this past week. I had planned on posting something in the middle of the week, but then time got away from me, and I didn’t have anything interesting say anyway, so rather than to force a post, I decided to just take a break. Anyway, school is back next week, so hopefully I can have regular outfit posts again and the blog will be back on track.

Back to the matter at hand – here’s my outfit for this week’s SIA, inspired by Melissa McCracken‘s synesthetic painting. I had to admit, I picked this mainly because it’s such a beautiful piece. I had no idea what I was going to wear for it. By a stroke of luck, last week I went shopping with my sister and picked up a few new tops, including this lilac tunic (my sister called it “taro-colored”, which is quite accurate actually). Even though the color isn’t exactly right (the painting has more pink than purple), I thought the flowy silhouette would be a good fit for this. I paired it with my navy jeans and dark red heels to mimic the other colors in the painting. I thought about adding my yellow brooch as well, but it clashes with the purple. Besides, the tunic has some very pretty embroideries already, and I didn’t want to distract from them, so I figured this would do, even if it’s not as close to the painting as I’d like.

So that’s it for me. I’m probably going to post the round-up on Wednesday, so you still have until tomorrow to send me your outfits. Get to it!

As some of you may have known, Terry Pratchett passed away on March 12. So this isn’t so much a book review as a tribute to him (even though I did just finish The Wee Free Man, one of his Discworld YA books, not as funny as the usual Discworld stuff but still very good.)

Good Omens was one of the first English-language books I bought when I first moved to LA, and it introduced me to both Terry Pratchett and Neil Gaiman. After that, I got The Color of Magic – the first in the Discworld series – and I was hooked. I didn’t realize it at the time, but those books have solidified my love for fantasy, solidified my sense of humor, and influenced so much of my writing. I never even try to imitate Sir Terry’s writing – you can’t – but I certainly try to approach my fantasy world with the same attention to details and level of realism (sounds like an oxymoron, but it isn’t).

Look, I’m terrible at waxing poetic and being sentimental about things, so I’ll just end this with a quote from Reaper Man: “In the Ramtop village where they dance the real Morris dance, for example, they believe that no one is finally dead until the ripples they cause in the world die away—until the clock he wound up winds down, until the wine she made has finished its ferment, until the crop they planted is harvested. The span of someone’s life, they say, is only the core of their actual existence.” If that is the case, then Terry Pratchett will live forever.

And although it is impossible to capture the essence of Discworld in an outfit, I put this together as an homage to my four favorite Discworld characters – Death, his granddaughter Susan, Granny Weatherwax, and Lord Vetinari. Now that I think about it, they’re fundamentally very similar characters – people who are very good at their jobs, who do it calmly and efficiently, without making a fuss about anything. And of course, they’re all dressed in black. No wonder I like them 🙂 I guess the scarf is a nod to the stars on the hats and robes of the wizard of the Unseen University as well.

Dress: tailor, Boots: Dan Sko (my tall heeled boots might have looked better with the dress, but I decided that Susan and Granny Weatherwax would go for something more sturdy and sensible), Scarf: gift

The next color in the Pantone-inspired Challenge is “mauve mist”, which looks like a dusky purplish pink to me. I don’t have anything like that in my closet, and I was thinking I could get away with my pink sweatshirt, when serendipitously, I got this scarf as a Teacher’s Day present from my students. It looks gray from afar, but up close it’s more purple, which is perfect. And better yet, the scarf has a different pattern on the other end (I’ll show you guys soon), so it’s like two scarves in one.

And yes, this is the same exact outfit from yesterday, just with different scarf and boots. I’m creative like that 😛

P/S: I’m also linking up with Bri’s Third Thursday Thread. The theme is “Fall Footwear”, so it’s all appropriate.