Next Wednesday is scheduled for the SIA round-up, so here’s the book reviews, a week early. It’s been an interesting month of reading, and I enjoyed all of them except one! 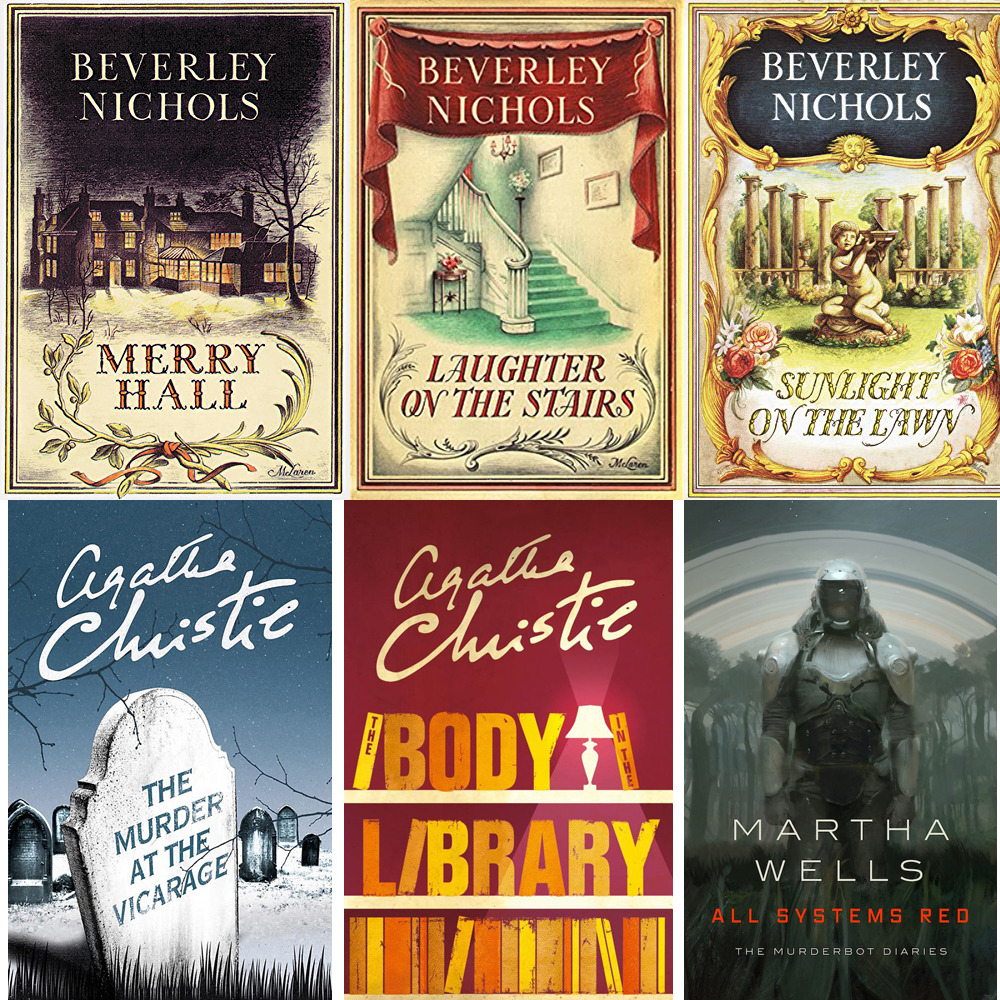 I came across a quote by Beverley Nichols on a gardening blog and was immediately drawn to his humor and his way of describing nature, so I immediately tried to find more of his books. Not all of them are available in ebook format, but I did manage to find this trilogy, which is a memoir about his endeavor to restore a Georgian manor house and its garden (kind of similar to A Year in Provence, but with more of a post-war British vibe rather than a French vibe.) Nichols’s writing is a little old-fashioned, sure – the books were written in the 1950s, and he loves his purple prose – but his observations remain true and his British humor goes a long way toward making this enjoyable. I had a constant smile on my face as I was reading it, and even laughed out loud a few times – only a few authors (Terry Pratchett, Bill Bryson, and Mary Roach) manage to do that for me. His house and garden are pretty much an Anglophile’s idea of Heaven (that Anglophile being me), his neighbors and friends are entertainingly depicted in a super British way, AND he’s a cat person. How could I not love this? 5/5

The Murder at the Vicarage & The Body in the Library by Agatha Christie:

Beverley Nichols has put me in the mood for something British, and what’s more British than a couple of Miss Marple murder mysteries? I’ve read a few Agatha Christie books before (And Then There Were None and Death on the Nile, mostly because I love the two adaptations – the 2015 BBC version of And Then There Were None, and the 1978 version of Death on the Nile with Peter Ustinov), and of course I’ve watched all the Miss Marple series with Joan Hickson, but this is the first time I read the Miss Marple books. Despite being familiar with the stories already, I was still drawn into them (well, it helps that I watched the TV series a while ago and didn’t remember exactly what happened.) They may be a little slow for the modern reader (“The Body in the Library” is a little more fast-paced), but there’s a reason Agatha Christie is called the Queen of Crime. The characters are wonderfully drawn, the murders themselves are full of twists and turns, and there are enough side plots to keep you guessing until the end. 4/5

I decided to take a break from all the British village drama and go in the opposite direction – a sci-fi novella about a self-aware android. The eponymous Murderbot is responsible for the security of a team of explorers on a new planet, but it couldn’t care less about humans and only wants to spend its days watching TV (we’ve all been there, haven’t we.) However, when they lose contact with another team on the other side of the planet, it is up to Murderbot and its human clients to figure out what’s wrong. I expect to love this (an anti-social android is so me), but… well, I didn’t. For one thing, the characters are not that great – the book starts with Murderbot already self-aware, so we never got to know it fully, the humans are all interchangeable, and the relationship between Murderbot and the humans are supposed to be awkward and sweet, but it’s just bland to me. Plus there’s the plot, which manages to be both complicated and vague at the same time. 1/5

(P/S: If you want a book about a self-aware android – well, kind of an android – that is hilarious, features an interesting plot, and also tackles some pretty thought-provoking ideas about what it means to be humans, read Feet of Clay by Terry Pratchett instead.)