It’s an interesting month of reading. Some of the books are not my usual fare, but I enjoyed them all, so here goes: 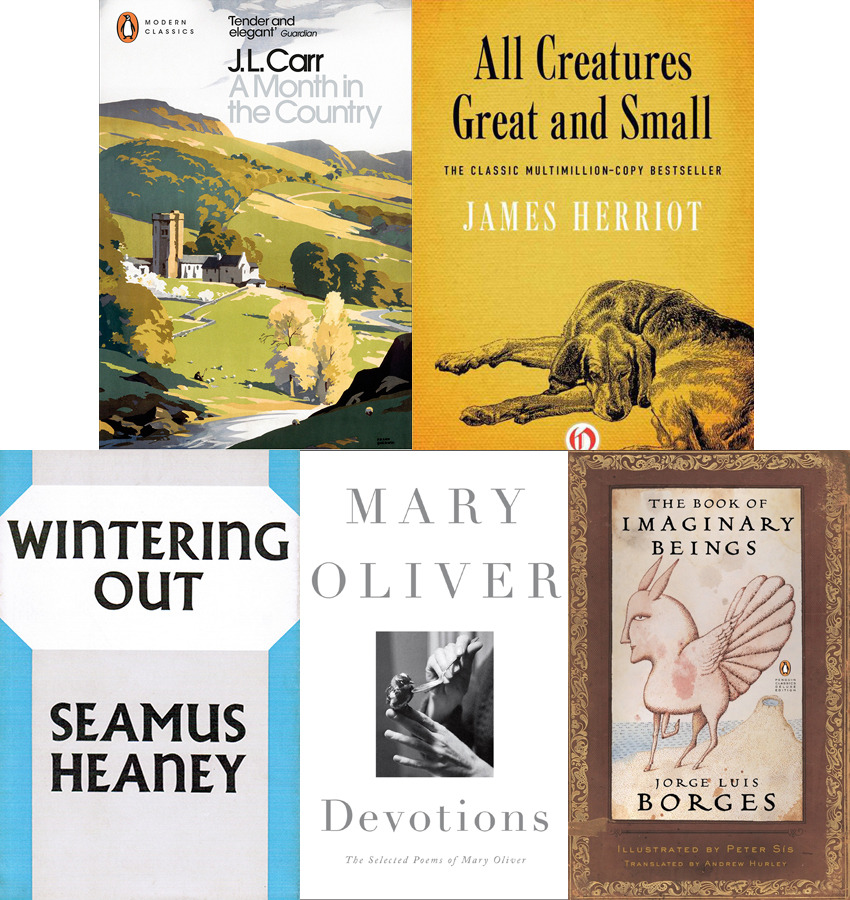 A Month in the Country by J. L. Carr:

It seems my specialty this year is short, simple novels about the human condition and non-fiction books about nature. Since I just read a non-fiction book about the English countryside (“Wilding”), I thought I’d read a fiction book about the English countryside next. Revolving around a shell-shocked WWI veteran hired to restore a medieval mural in a Yorkshire church, this book definitely falls into that Ruskin Bond camp of “profoundly simple and simply profound”. On the surface, it doesn’t seem to be about much – the main character interacts with the locals, commiserates with a fellow veteran/archeologist, falls in love with the wife of the local vicar, and muses about the anonymous artist behind the mural, all in a very restrained, understated manner. But the whole book is filled with a powerful sense of nostalgia, for things that were and things that could have been, that will leave you both heartbroken and deeply touched. 4/5

Wintering Out by Seamus Heaney:

I’m still slowly working my way through Heaney’s works, and it seems natural to move from “A Month in the Country” to this. I’m still struggling with poetry as a whole (maybe because English is my second language, so some of its nuance is lost on me?) and this collection, which is the most abstract of Heaney’s that I’ve read so far, doesn’t make things easier. My favorite poems in this (“The Wool Trade”, “Veteran’s Dream”, “First Calf”, and “Mother of the Groom”) are about very simple and even prosaic things, but they reveal deeper meanings upon reflection, whereas some others I don’t even know what they’re about, so I just let the lyricism and musicality of the language wash over me. Sometimes that may be the best way to enjoy poetry. 3/5

The Book of Imaginary Beings by Jorge Luis Borges:

I took a break from my usual non-fictions with this combination of my two favorite genres – non-fiction and fantasy. This encyclopedia lists 120 mythical creatures from religion, folklore, and fantasy writings from around the world, ranging from the well-known (Banshee, dragon, elf) to the more obscure (axehandle hound, chon-chon, squonk). It’s a good reference book, though I was hoping for a more scientific, consistent approach. You know, like an actual encyclopedia – an entry may consist of descriptions of the creature, its origin and history, etc. Here, they are a bit all over the place. Most do describe the creature and its origin, but others are only excerpts from whatever book or piece of writing that mentions the creature. It may be irrational to demand a scientific approach, considering that this is a book about fantasy creatures, but I think it would make it much more interesting to read. 3/5

All Creatures Great and Small by James Herriot:

From imaginary beings to very real animals, my next read is this classic memoir (actually, I’d call it a work of autobiographical fiction, since the stories are only loosely based on the author’s experiences.) It’s a series of anecdotes that tells the story of a country vet in 1930s Yorkshire (again). The anecdotes, which are about the animals as much as the colorful people and landscape of the Yorkshire Dales, are sometimes hilarious, sometimes heart-wrenching, but always moving and full of human interest. The TV series (at least the 2020 version, I haven’t watched the 1978 version yet) is very enjoyable as well. 5/5

After Seamus Heaney, I wanted to branch out to other poets. I thought about reading some “classics” like Robert Frost and e.e. cummings, but then I came across Mary Oliver’s name and found her a little more accessible, so I read her first. One of the reasons I never quite “get” poetry is because I tend to skim while I read, while poetry requires slower, more meditative reading, and Mary Oliver’s simple language is easier to absorb. Her poems all deal with nature, which is another reason I’m drawn to them, and while they’re a lot more introspective (compared to Heaney, which is more narrative), they’re also beautiful in their simplicity. 4.5/5