Another fantastic month of reading (though to be fair, the two TV books are very quick reads): 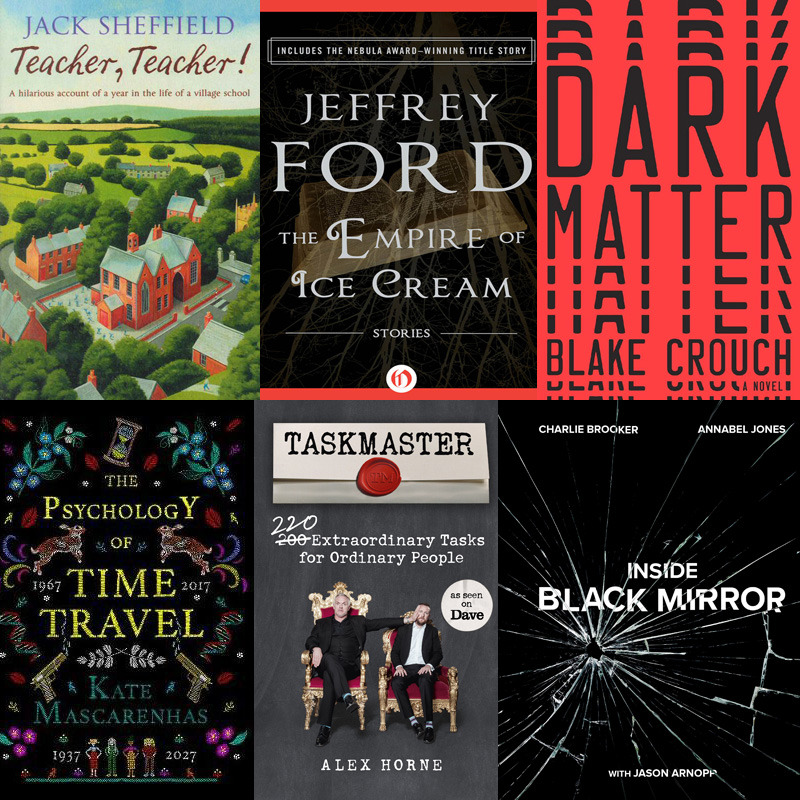 This is basically “All Creatures Great and Small” by James Herriot, but with a teacher instead of a vet – it’s about a young man appointed to be the headmaster of a small primary school in rural Yorkshire in the 1970s. Just like “All Creatures Great and Small”, it contains anecdotes about the students, staff, and the eccentric villagers, based on the author’s own experiences. It’s sweet (though only mildly amusing – if you’re looking for something laugh-out-loud, you’ll be disappointed), and I really enjoyed reading about all the school activities, like Bonfire Night, Summer Fair, and Christmas Pantomime. It must be the Anglophile in me. 4/5

The Empire of Ice Cream by Jeffrey Ford:

When checking out a new author, especially in fantasy/sci-fi, I always try to find a short story collection, since they’re more accessible than a full-length work. I’ve never heard of Jeffrey Ford before, but I saw this title floating around some book recommendation website and it immediately grabbed my attention. It’s been a while since I read an adult fantasy book too, so a short story collection seems like the right choice to get back into it. The stories are a little familiar – they mostly revolve around a mix of the ordinary and the extraordinary (like a fairy recounting his life in a sandcastle, or Charon taking a holiday) – and remind me a bit of Ray Bradbury (especially the novella “Botch Town”), but that’s no bad thing. However, though I enjoyed them, most of the stories are quite unsatisfying – they tend to be circular, in that details and events from earlier are used or mentioned again at the end, but we never find out what that means. I don’t need the story to spell everything out for me, but some explanation would be nice. 3.5/5

I don’t often go for sci-fi/thriller books, but this one has an interesting premise – a man is replaced by his alter ego/doppelganger from another universe and must now get back to his family. The multiverse seems everywhere these days, so I thought, why not check this out? It is very fast-paced and cinematic book (and of course, it’s getting adapted into a TV series), but the story gets bogged down by its own logic of the multiverse-travel instead of the emotional/philosophical ramifications of it. The character only very briefly wonders what his life would turn out like if he’d chosen a different path, but never stops to do anything about it – it’s all about getting back to his family. Plus, the author wrote himself into a corner, so the ending is a total cop-out. I have this author’s next book, “Recursion”, on my TBR list, but I’m not sure if I want to read it now when this one is so disappointing. 2.5/5

The Psychology of Time Travel by Kate Mascarenhas:

I was going to read this last month after “To Say Nothing of the Dog”, but I thought two time travel books consecutively may be too much for me, so I saved this for later. It starts out well – four scientists invent time travel in 1967, but when one of them has a nervous breakdown, she is cast out to protect the group. 50 years later, she is informed of a future murder, prompting her granddaughter to uncover the mystery. If the book had stuck with this murder mystery angle, I would’ve enjoyed it more, but instead, it keeps cutting back and forth between at least 3 different timelines, with many different characters, none of whom I really connect with, so in the end, I don’t care about the mystery anymore. True to its title, the book also raises some interesting issues about how time travel can affect one’s mental health (for example, a time traveler gets so chronologically lost that she becomes anorexic), but again, the story is all over the place so none of those is explored to its fullest. 2.5/5

Ever since the pandemic, Taskmaster has been my one constant source of joy and sanity preservation (ironic, given how insane the show is), so when I saw this book at the used book store, of course I had to snap it up. To be fair, it’s not really a book to read – rather, it contains ideas and suggestions for you to host your own Taskmaster event, or just simply pass the time (there are sections for pub tasks, rainy day tasks, transport tasks, and solo tasks if you have no social life, like me.) Still, for a fan of the show, the book can be fun even if you don’t do the tasks. I got a kick out of spotting tasks that have been on the show (the book came out after series 7, but I’ve recognized some tasks from later series, like “make your knee look like a famous person” from series 9), and there are various behind-the-scene tidbits throughout the book that I really enjoyed too. 4/5

This is another TV behind-the-scene book I picked up from the used book store (somebody must have gotten rid of their collection.) This book breaks down each “Black Mirror” episode (this came out before “Bandersnatch” and S5, so they’re not present, but I’m OK with it because those are the weakest episodes anyway) with the two showrunners, Brooker and Jones, along with other members of the cast and crew discussing their creative process – basically, it’s like a DVD commentary in book form. It’s great for any fan of the show, plus the hardcover edition is beautifully printed and illustrated, like a coffee-table book (which makes it a bit awkward to read in bed, but other than that, no complaint.) I was tempted to rewatch the show along with the book, but just the thought of watching “The National Anthem” or “White Bear” again is enough to stress me out, so maybe I’ll just watch some of the lighter/happier ones… “San Junipero”, basically (“Hang the DJ” also has a happy ending but it’s not as good. I guess “USS Callister” counts as a happy ending too.) 5/5