It was almost too easy, putting together an outfit for this week’s SIA, inspired by John Singer Sargent’s “Carnation, Lily, Lily, Rose“. I knew I would wear this skirt because the print is too perfect (even though it doesn’t have carnations or roses.) For the top, I chose my lace t-shirt to mimic the girls’ dresses and the texture of the paper lanterns. I guess I could’ve worn black shoes to mimic their black stockings too, but I think my beige sandals are a better choice, style-wise.

There’s still time to send me your outfit if you want to participate, and don’t forget to stop by tomorrow for the full round-up! 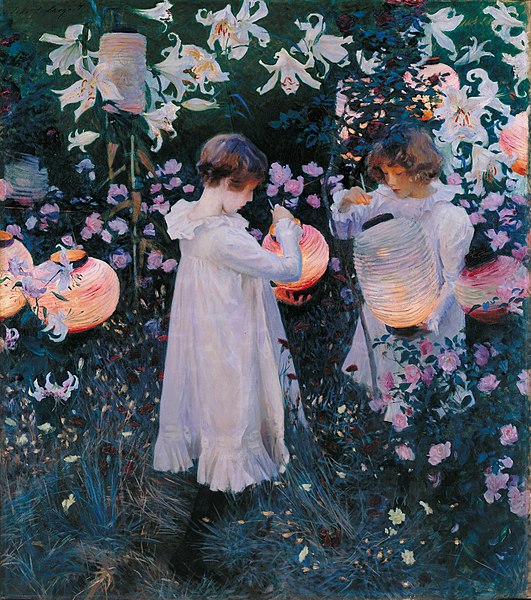 Whenever an SIA challenge features a work of art with bright colors, it’s a challenge for me, and this week’s inspiration, a piece of 16th century Turkish tulip embroidery, is no different. As gorgeous as it is, I had no idea how to interpret it, since the dominating color is red, and I have very few red pieces in my closet, and even fewer pieces with a print similar to this. And then I remembered my reversible wrap skirt, with an exuberant floral print on one side and bright red on the other. My plan was to wear the red side with a printed/embroidered top, but after looking more closely at the print, I decided it would be better – sort of like a realistic interpretation of the embroidered tulip, if you will. Then I chose my chambray shirt because the faded blue in the piece looks like chambray, and finished the look with my heeled loafers. This is a looser interpretation than I usually do, but I quite like it.

Don’t forget to drop by Jen’s blog to see how others do with this piece!

This is like, a week late (that’s what you get for scheduling posts a week ahead), but I hope all of my US friends and readers had a great Fourth of July. I didn’t actually celebrate, but to get into the spirit of it, I did put together this red, white, and blue outfit – after all, the US has been my adoptive home for seven years. Besides, my outfits have been monochromatic for so long, so this chance to wear more color is really welcomed.

I had a hard time deciding which book to review, because most of the ones I read this month are parts of series I’ve already reviewed before (the Grisha trilogy, the Peter Grant books). In the end I had to go with the one standalone book, Gwenda Bond’s “Girl On A Wire”, even though I really really dislike it. I’ll talk about why in a minute. First, a summary: the story revolves around 16-year-old Jules Maroni, a high-wire walker who is ecstatic to join her family of circus performers at the up-and-coming Cirque American. However, upon arriving, Jules discovers an old rivalry between her family and the Flying Garcias, a family of trapeze artists. The Maronis’ safety is now threatened by the appearances of strange, apparently cursed objects, and together with a Garcia son, Remy, Jules is determined to uncover the truth before it’s too late.

From that, I expected, if not a YA version of The Night Circus, then at least something like Water for Elephant – a star-crossed love story set in the rich world of a circus, with some hints of fantasy. But what I got was repetitive, predictable, and anti-climatic. You guys have heard of the phrase “show, don’t tell”, right? Basically, it means you should let the readers visualize the story and experience the actions along with the characters, instead of just telling them what happens.

This book? It’s all “tell”. To be fair, all the wire-walking scenes are pretty well-written (they make my palms sweat), but everything else, from the plot to the characters, is flat as a pancake. The main romance is really boring in that middle-school, “love at first sight” kind of way; the mystery doesn’t get built up at all, even when it leads to (spoiler) death; and the resolution feels too easy. I would’ve given it one star had it not been for the wire-walking scenes.

Oh and, another thing. The two main characters’ real names are actually Julieta and Romeo. *rolls eyes so hard*

There are a number of outfits described in the book, but I can’t recreate any of them with what I have in my closet, so in the end I went with a combination of details pulled from various looks – the red tutu that Jules wears to perform, her flats, Remy’s black T-shirt (I picked my embellished tee instead of a plain one because, you know, sequins and circuses and all that), and the red rose that is the first of the cursed objects (my brooch is actually an anemone, but nobody needs to know.) All in all, I’m happy with the outfit, even if I hate the book.

I first found out about Catherynne Valente’s “Deathless”, strangely enough, not from recommendations after reading The Grisha Trilogy (both deal with Russian mythology so you would think it’s natural to go from one book to the other), but from a quote I saw somewhere on tumblr. The language immediately draws me in, so I decided to check it out. And while it’s also steeped in Russian myth, “Deathless” is completely different from The Grisha Trilogy. It is the story of Marya Morevna, who is blessed (or cursed) with the ability of seeing the world as it really is – full of magical creatures, neither evil or benign, but all representing something much more desirable than her own bleak existence in Leningrad during the Revolution. It all changes when Koschei the Deathless sweeps Marya away to his kingdom to be his bride, but Marya learns that even in this Country of Life, her two worlds are still closely linked, and war and death and destruction are never far away.

Now I can’t tell you what exactly happens in the book, not because of spoilers, but because sometimes I’m not entirely sure myself. There is a lot of ambiguity and the characters’ actions don’t always make sense. Usually that would drive me up the wall, but somehow with “Deathless” I didn’t mind it. The book combines the magical elements with some of the darkest pages in the actual history of Russia to create a world that is beautiful, quirky, but also dark and cruel (the way it portrays the magical creatures actually reminds me of the Studio Ghibli’s films a lot), so of course I love it. Plus the writing is so beautiful that I became totally immersed in the story, and a bit of confusion actually adds to the overall fantastical atmosphere. Highly recommended.

As for the outfit, I again tried to do something Russian-inspired (but not too costume-y) with the embroidered peasant blouse, full skirt, and rich colors usually found in traditional Russian clothing. Even my sandals can count as an interpretation of the woven shoes (lapti) usually worn by Russian peasants.