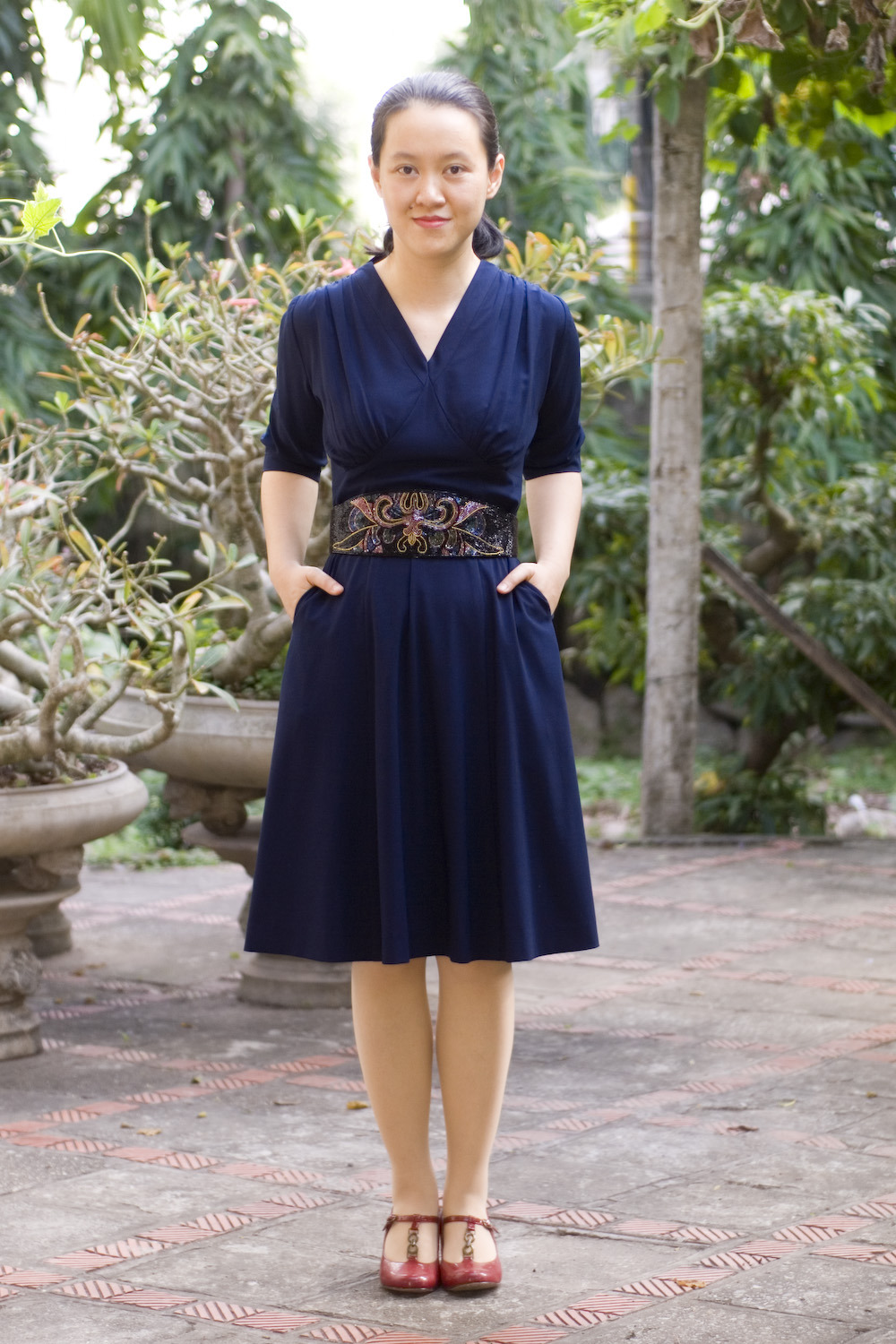 I haven’t been to a lot of weddings since I moved home from LA – most of my high school and college friends were married by then – but one of my co-workers got married earlier this month, so I finally had an excuse to dress up a bit.

Wedding season in Vietnam is usually from late November to mid-March – it has the best weather (summer is just too damn hot and humid), and since our Lunar New Year falls around January and February, it’s when most families have food stocked up, which in the old days made it easier to hold a wedding feast. Some weddings may take place in the dead of winter, when it’s too cold to dress up (like my sister’s – she got married around Christmas), but lucky for me, this early spring wedding was the perfect time to bring out my dressier pieces – like this belt and these shoes. 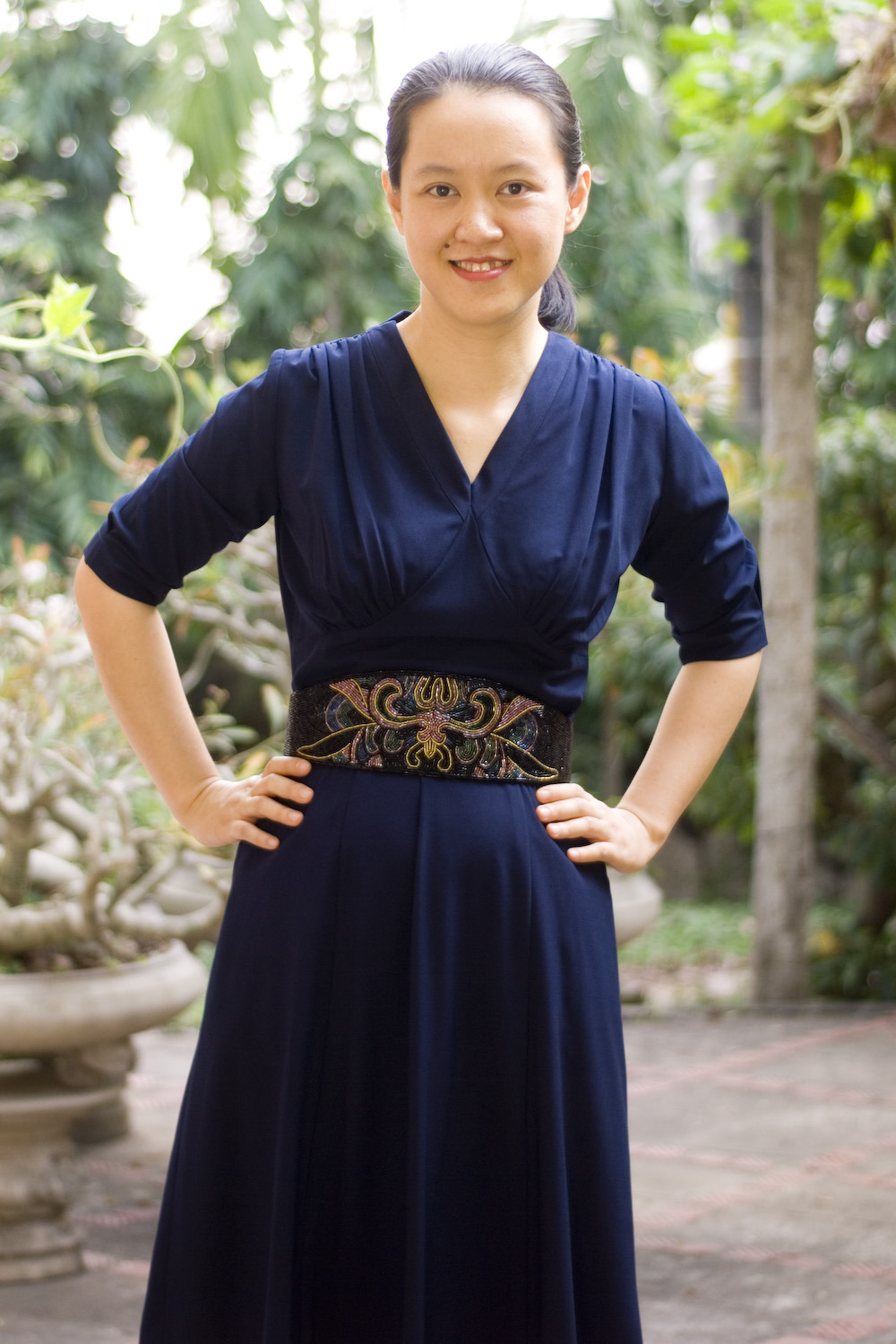 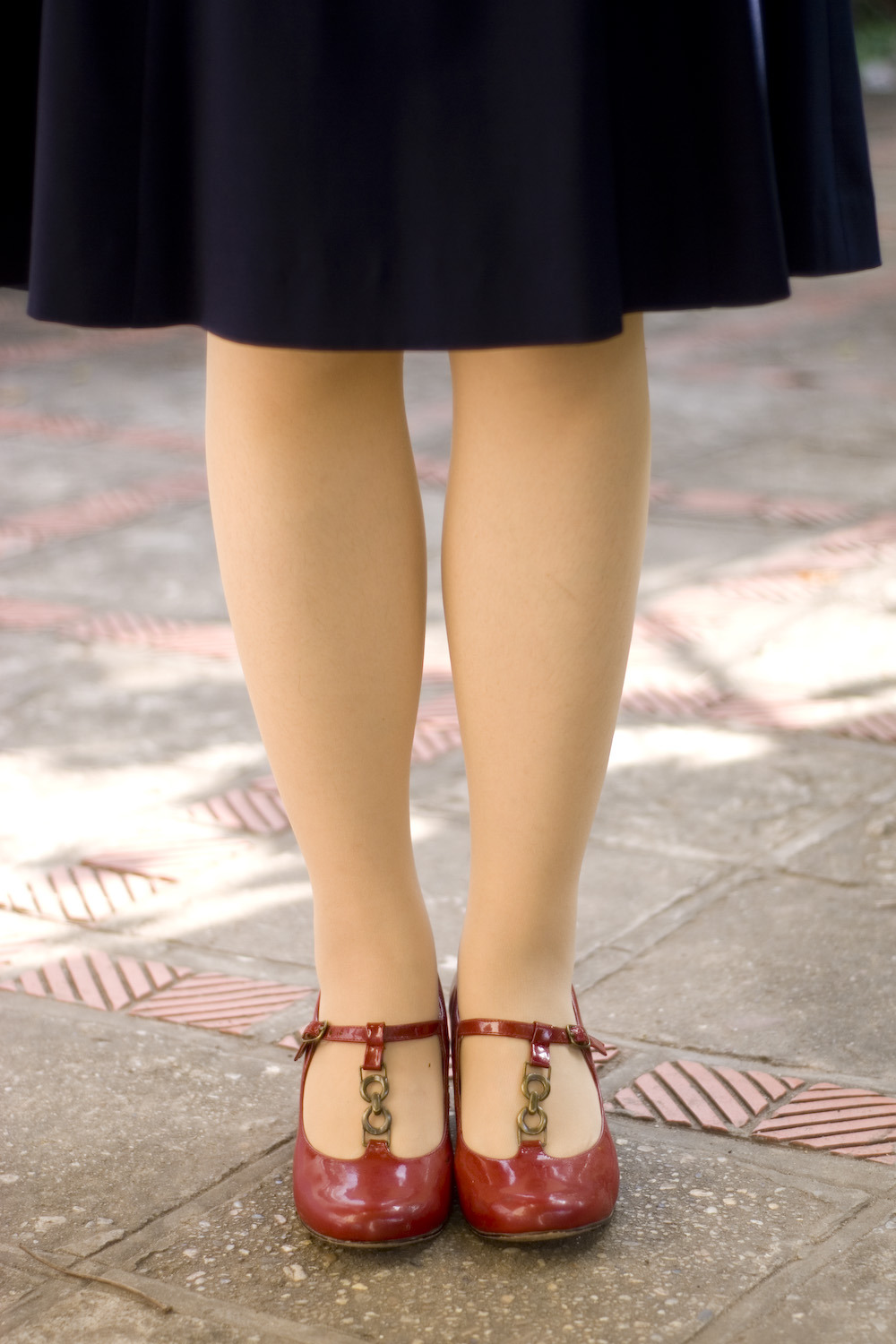 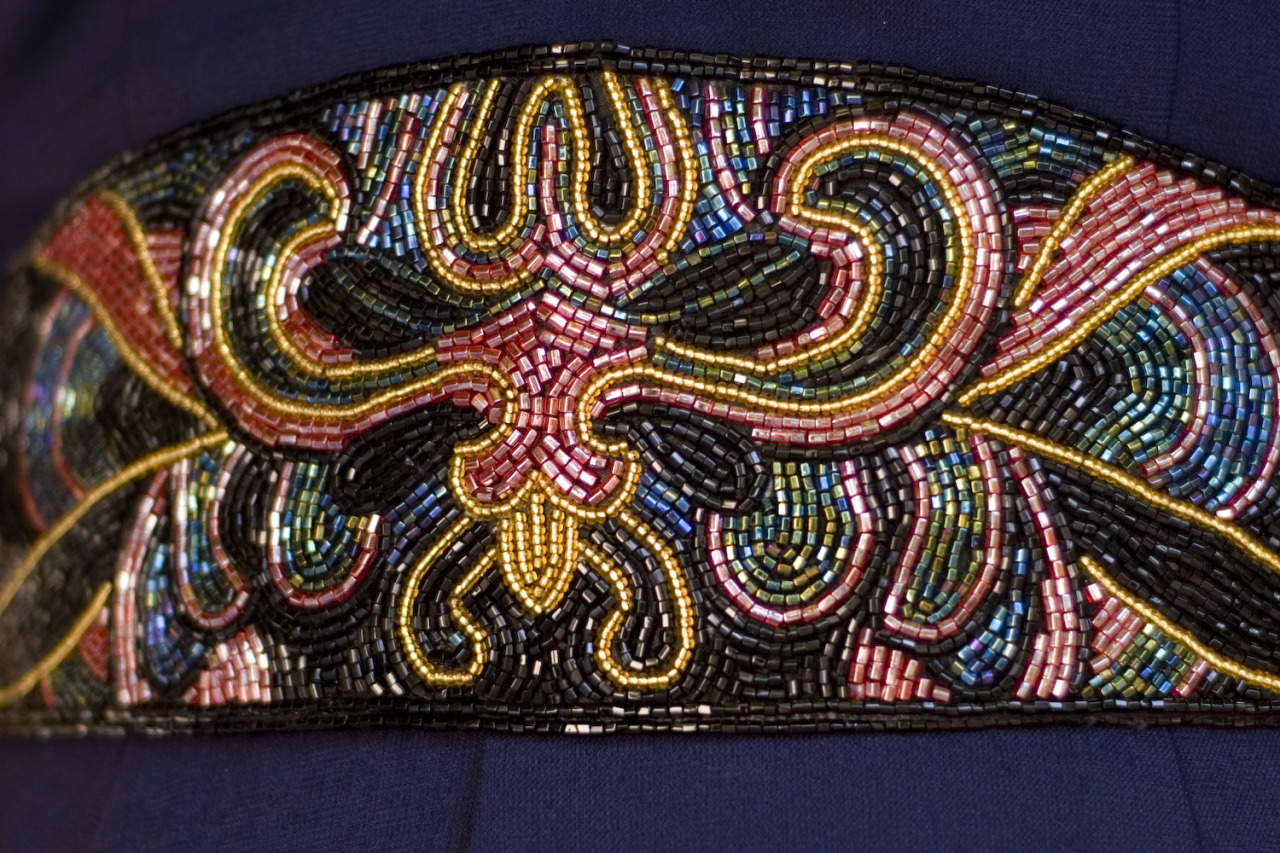 I wore this to a Bastille Day celebration at the French Embassy. My dad works with a French university, so he got invited, and he took my mom and me along. Is it lame to hang out with your parents like that? I don’t know, and even if it is, I wasn’t going to turn down free food (free French food) because of it.

This dress is a hand-me-down from my sister, and it’s actually dark navy, so I kept with the “red-white-blue” theme by adding my silver pin and ruby heels – they’re pretty much my “special occasion” shoes now. I don’t go out on special occasions too often, but every time something like this comes up, I always remind myself that I need a black dress and dressier shoes. Of course, I would always manage to put together something sufficiently appropriate from what I already have, and tell myself that there is no need to buy a black dress and shoes that I only wear once in a blue moon. What do you guys think? Is it worth the investment?

It’s Thursday and my brain is shutting down, so I thought this list of questions I got from happy, honey and lark a while ago would be a fun way to fill up the post.

What did you look like one year ago today? Pretty much the same (even my hair was the same length, because I only have it cut once a year, around June or July when it gets too hot to have longer hair). It was way warmer this time last year though.

When did you wake up this morning? I’m not sure what time it was, but my mom turned the bathroom light on so it must’ve been pretty early. Then again at around 6:15, which is my usual wake-up time when I have to teach in the morning.

What was the first thing you thought when you woke up? “Is Taco back yet?” Our dog, Taco, has gotten into the annoying habit of escaping through the backyard fence and going on nightly excursions. Apparently he came back around midnight.

Have you called someone today? Who and what did you say? The publishing company where I translate books. My translation of “Warm Bodies” just hits the shelves so I asked when I can stop by to pick up my complimentary copies.

What mood are you in? Tired. Is that a mood? I don’t know. I’m just tired.

Do you hurt anywhere? My shoulders and back and neck from too much computer, as usual 😦

If you could choose anything to eat right now, what would you want? Chocolate!!! Always.

What did you buy last? Oh man I honestly don’t remember. Does grocery count?

Which was the first website you visited on the internet today? I checked my email, then feedly and tumblr.

What are you doing tonight? Watching Hannibal. I’ve just started it, so I’m doing a marathon (the only kind of marathon I do) to catch up, except it’s not always a good idea to watch too much of it before bed.

Which is the first song you put on today? Care of Cell 44 by The Zombies. I just downloaded their album after last week’s Mad Men.

What were you doing exactly a week ago, this time? Probably the same thing I am doing now – at my desk tearing my hair out over a script.

The weekend then, what about it? Nothing on Saturday, then on Sunday I’m teaching a class for amateur filmmakers. So more work. I’m thinking about showing this short film to them though, so that should be fun. I like traumatizing my students (go ahead, watch it. You know you want to :D)

For this week’s SIA, inspired by Alexander Calder’s “Flamingo”, I knew I was going to wear my red heels to mimic the sculpture itself, but I had no idea about the rest of the outfit. Then when I looked at the photo of the sculpture again, I came up with the idea of wearing all neutrals so that the heels would stand out like how the sculpture stands out from the buildings around it. I liked this when I put it together, but now when I look at the photos again, I realize it’s that weird mix between fussy and frumpy that some of my outfits usually end up when I overthink things (jeans might be better.) It looks like simplifying my style will be more difficult than I thought…

Don’t forget to swing by Jen’s blog to see how this is interpreted! It’s the first time a sculpture is featured in SIA, so it should be awesome.

For this week’s SIA, inspired by Vermeer’s “The Milkmaid”, I only had two options: either blue cable-knit sweater + red pants + mustard scarf, or mustard cardigan + navy skirt + red heels. In the end I went with the second choice, because even though this skirt is not the rich shade of royal blue like the milkmaid’s apron, it allowed me to layer my green gingham shirt underneath to mimic the green sleeves of the milkmaid’s bodice. We’re nothing if not exact here at SIA 🙂

Remember to check out Animated Cardigan to see how others interpret this classic painting! The outfit is nothing to write home about, so here’s an impromptu TV review instead:

I had some unexpected free time this past weekend, which I spent watching the new Sleepy Hollow TV show. I love the Tim Burton movie, I like the writers, and the premise looks interesting. So far I’m enjoying it, but I think they make the mistake of overloading it with too much mythology so early in the series – to sum it up, the Headless Horseman is one of the Four Horsemen of the Apocalypse and Ichabod Crane is brought back from the dead to stop the end of the world. Which is all well and good, except it leaves the episodes weirdly uneven, and I often wonder what the “Monster of the Week” has to do with the bigger story arc. They should’ve taken a leaf out of Fringe (written by the same guys, Kurtzman & Orci) and presented it as an episodic show with an overarching mystery, and let us learn about the mythology as we go. Of course, that risks putting the show in the same trap that Fringe fell into, where it gets so wrapped up in the mythology and becomes way too convoluted.

The cast is good, though. Tom Mison, who plays Ichabod, is too pretty for my taste (mostly because I know him from Parade’s End, where he plays the quintessential pretty boy), but Nicole Beharie, who plays a Sleepy Hollow’s police officer unwittingly pulled into the fight to stop the Apocalypse, is awesome, and they have fantastic chemistry. Honestly the only regular character I don’t like is Ichabod’s wife Katrina, who’s not so much a character as a vessel for the writers to tell us what’s going on. Still, it’s only been three episodes, so I’ll keep watching.

You can tell how tired my brain is when I didn’t bother to come up with any clever post title and just use a plain description of the outfit. Anyway, I’m participating in the Thursday Thread link-up, which I’ve always wanted to do but never seem to remember the deadline. The theme is, you guess it, “Dressed up Tees”. It’s perfect for me, because I’m still a bit sick and a simple t-shirt and jeans is all I can manage. At least I tried to jazz it up with fun heels and a scarf .