Sorry for the late posting today. Usually I write my posts ahead of time and schedule them, but work has been so crazy lately that it completely slipped my mind. Also I haven’t had time to take outfit photos regularly or even think about putting together blog-worthy outfits, so expect posting to be spotty in the next couple of weeks. Hopefully as work slows down and the weather starts warming up, I can get back into it.

This outfit is from last week, when it was still pretty cold. I put the sweater out the previous night without thinking anything about it, but when I put it on in the morning, I realized it’s the perfect Halloween outfit – black, orange, stripes – so I added the cat brooch to keep with the Halloween theme. Halloween in Vietnam is never cold enough for me to wear something like this anyway, so I’m going to take the chance when I can.

(And yes, the boots are new. I’m in need of a pair of waterproof boots with a good grip, and it took me a while – as it is usual the case with me, I’m always looking for things at the end of the season when they’re no longer in stock – but finally I was able to find these. They’re probably the comfiest pair of boots I own and if it wasn’t getting warmer you’d see them a lot more on the blog.) 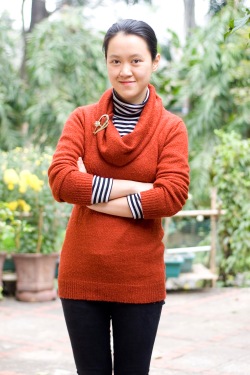 Here’s a tip: want to wear a scarf with your cowl-neck sweater? Just get a giant blanket scarf and cover up the cowl-neck part. Bam, you’re done.

Figuring out how to style said giant scarf, without making it look like a living thing trying to crawl onto your face, is another matter… 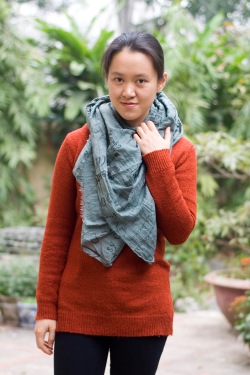 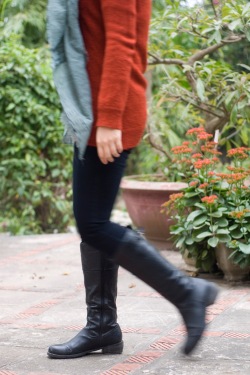 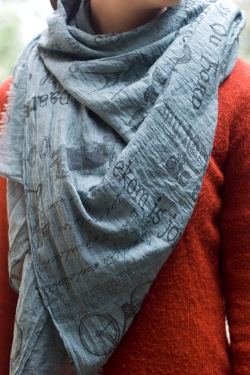 One of my goals for the weekly capsules is trying to wear the pieces I had to exclude from my previous seasonal capsule because of the arbitrary limited numbers. Like this sweater, for example. I like the color and the shape, except when I wear it again after all this time, I realized why I didn’t put it into my capsule in the first place – a cowl-neck sweater is kind of awkward to style, isn’t it? I mean, it’s not a turtleneck, so it doesn’t provide coverage for your neck, but what can you do if your neck gets cold? A scarf with a cowl-neck sweater is like socks with sandals, it’s just… no (believe me, I’ve tried.)

So the best I can do is layer a button-up underneath it, like this, or maybe save it for days when I don’t have to wear a scarf. Which doesn’t seem likely this week, what with my recent sore throat and a cold snap just coming in. Any idea? 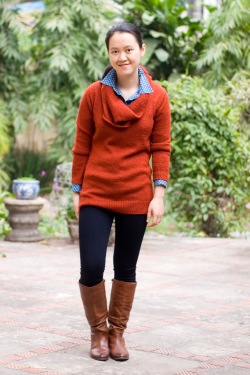 We interrupt your regular scheduled program of capsule outfits to bring you this look inspired by Helen Frankenthaler’s “Canyon”.

This is another outfit that made me look through my archives to make sure I haven’t worn it before, since it seemed so familiar. It turns out I have worn a similar color combination quite a few times before, but never with these jeans. I guess there’s just something about orange and teal (or orange and green) that seems right to me. Or maybe I’m secretly a leprechaun 😀

Anyway, don’t forget to check out Jess’ blog to see other interpretations of this painting. It’s my turn to pick an inspiration next week, and I’ll make sure to pick another female artist (this is as much a promise to you guys as it is a reminder for myself. I’m notoriously absent-minded about these things.)

Book Review: The Hero And The Crown

I’ve been quite remiss in my book reviews lately. I’ve mostly been rereading my old books (Neither Here Nor There because I wanted some laugh, Austenland and Northanger Abbey because of the JJ Feild effect) and comics, but I did manage one new-to-me book – Robin McKinley’s “The Hero and the Crown”. It’s just too bad that I didn’t enjoy it.

It starts out quite promisingly. The main character, Aerin, is the princess of Damar, but the entire kingdom looks at her with distrust, because her mother was supposedly a witch who enchanted the king into marrying her. At best Aerin is ignored, at worst she is treated as a threat. So Aerin decides to prove herself by taking up the one job that nobody wants to do – killing dragons. In this world, dragons are viewed as pests, so hunting them is necessary, but there is no glory in it. Of course, that is until Aerin has to face the fearsome Black Dragon…

I really appreciate this story, even if I’m not crazy about McKinley’s prose. A fantasy with a female protagonist who takes up the sword instead of waiting to be saved? And she suffers great physical pains as well as some serious PTSD because of it? Yes please.

This is the fourth Robin McKinley book I’ve read, and I’ve come to the conclusion that I just don’t like her. The only book of hers I truly enjoy is Sunshine, and even that doesn’t stick with me much. 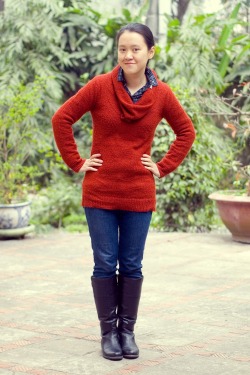 As for the outfit, it’s inspired by Aerin’s look – she’s described as having “orange/fiery” hair and hazel eyes (but seriously, how many fantasy stories with a redheaded, green-eyed heroine have there been?). I picked the arrow pin because I thought it worked in a fantasy-inspired look, even though Aerin’s weapon of choice is a sword, not a bow. Aerin is a rider and good with animals too, so I figure the boots and the photo with my dog Taco are appropriate.