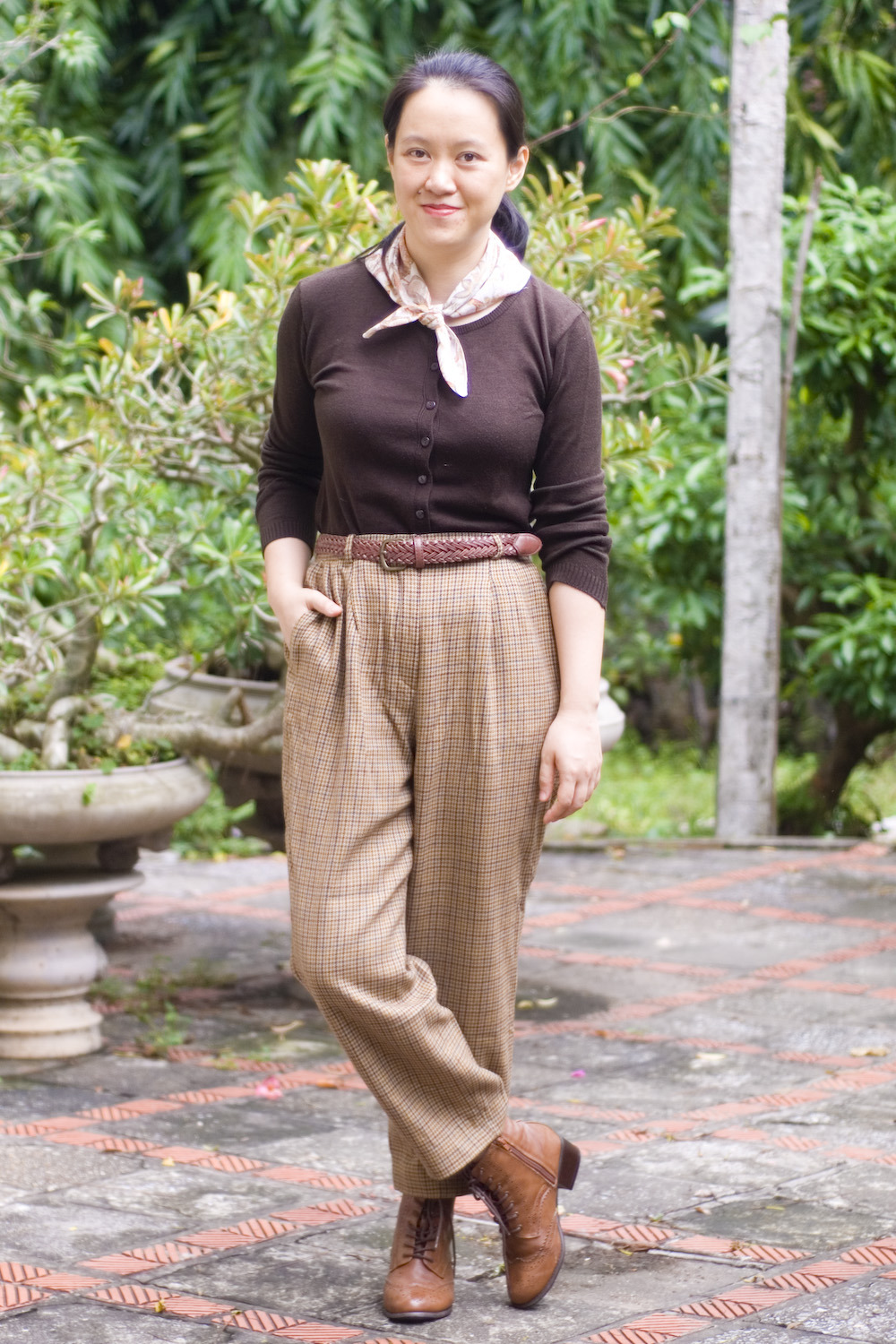 When I named this blog “14 Shades of Grey”, it was more of a joke (it’s a reference to an album by Staind) rather than a true reflection of my closet. If it was to reflect my closet at the time, “14 Shades of Blue” would be more apt. In recent years, though, especially during the fall/winter, “14 Shades of Brown” seems more appropriate. Take this outfit, for example – it is pretty much built around this neckerchief (the tag says “Sanderson”, which apparently is an English fabric designer). You may not be able to see it from the photos, but the pattern is very similar to this, and it totally appeals to my Anglophile, Morris & Co.-loving heart, so I just put together an outfit of brown items to match it. 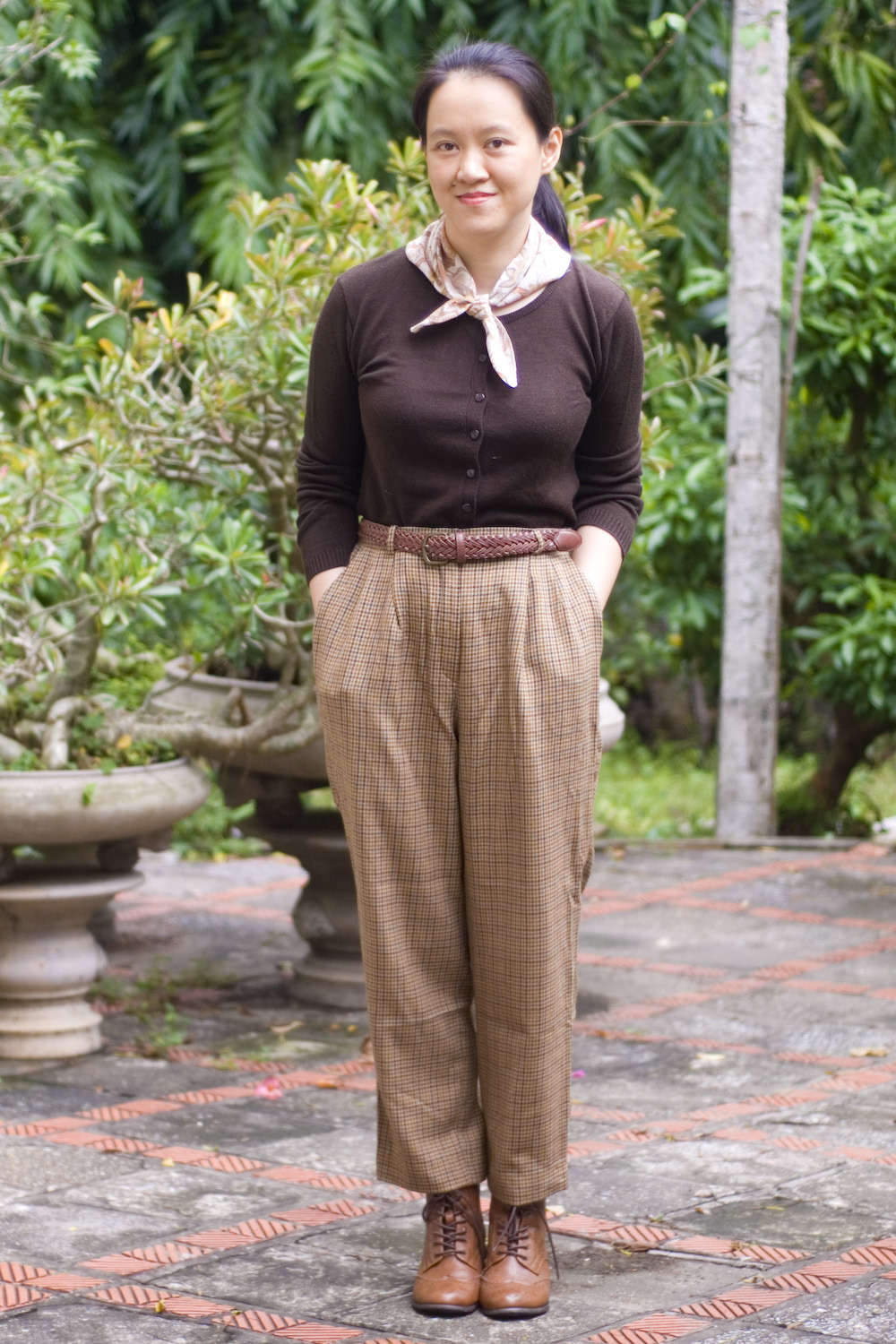 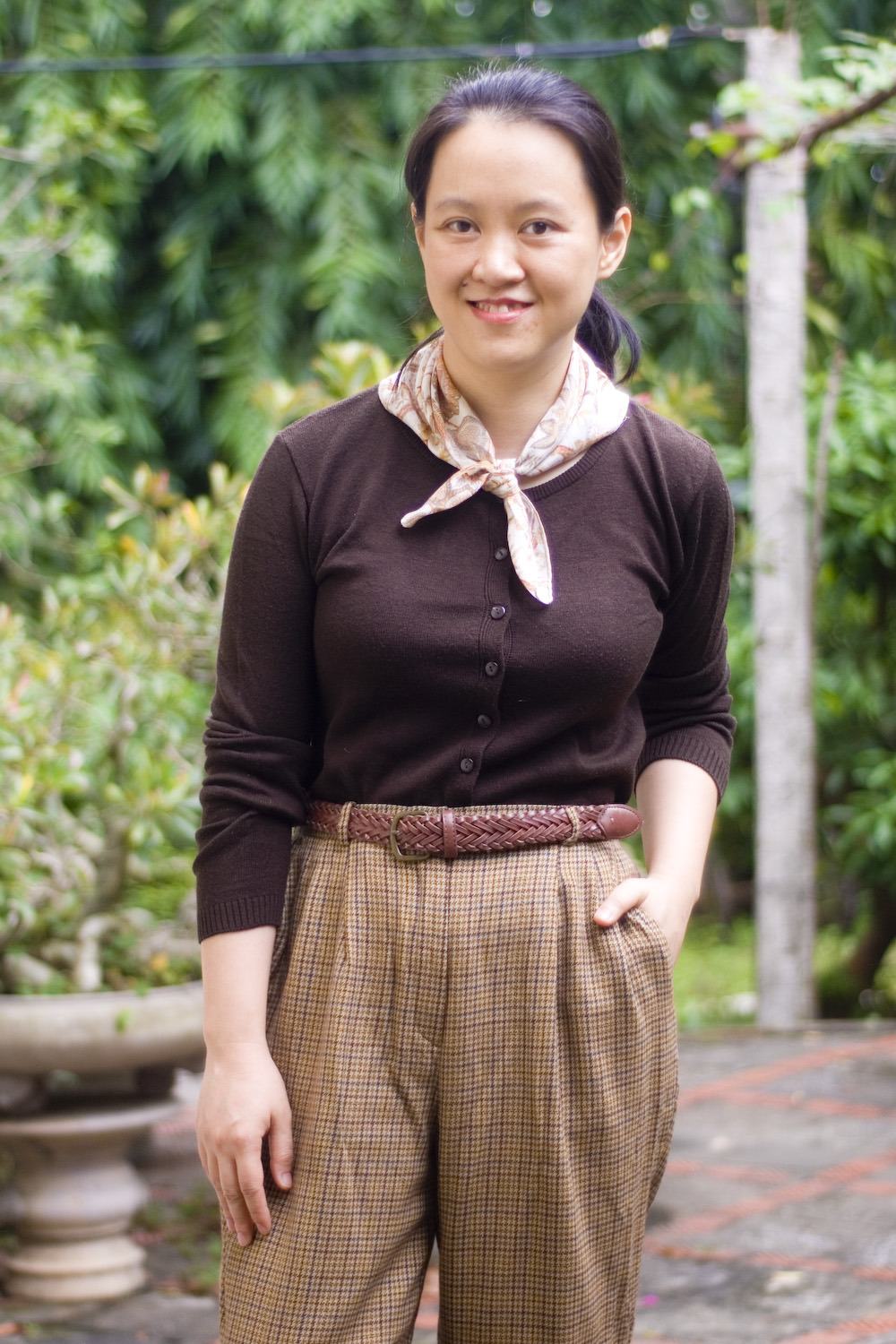 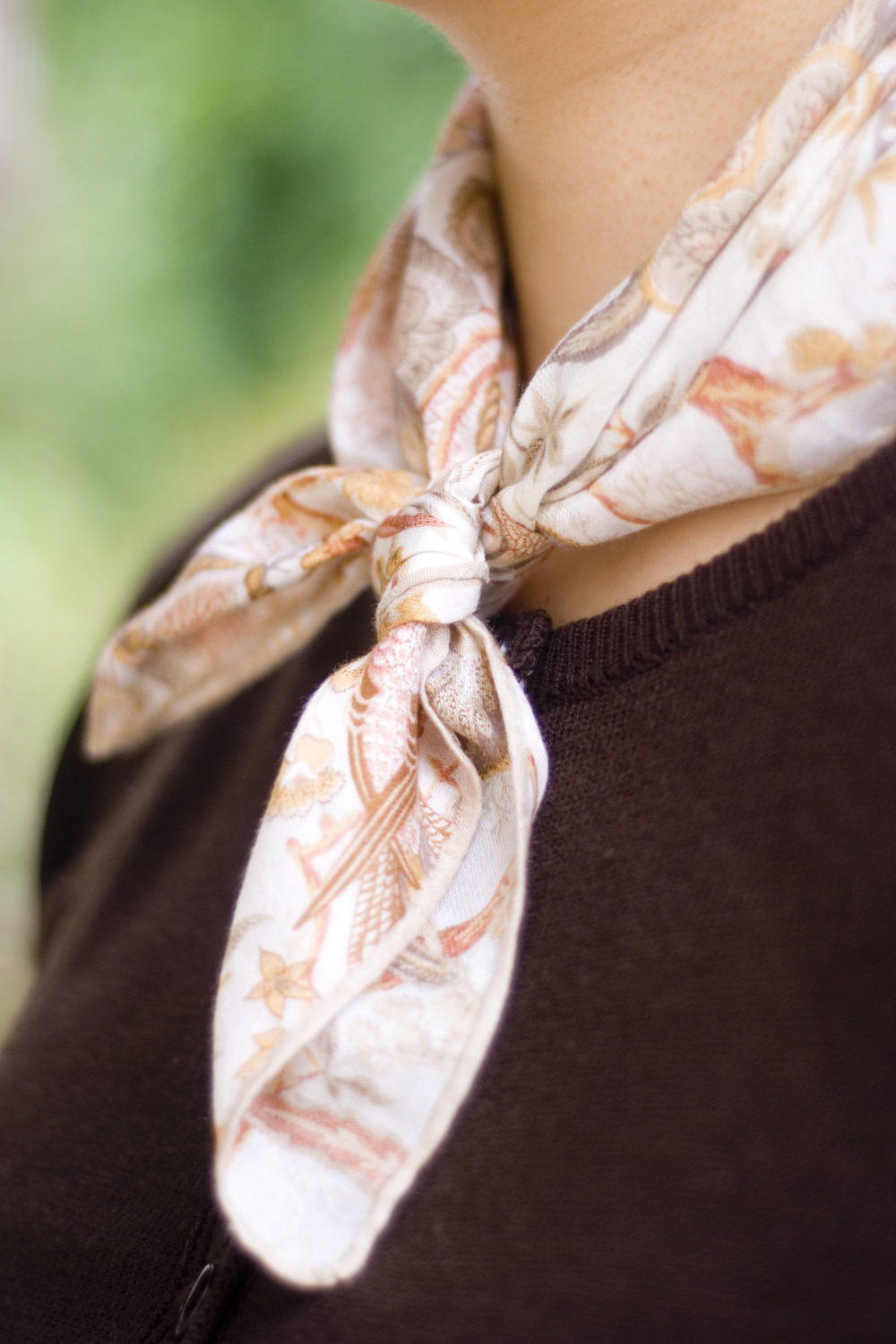 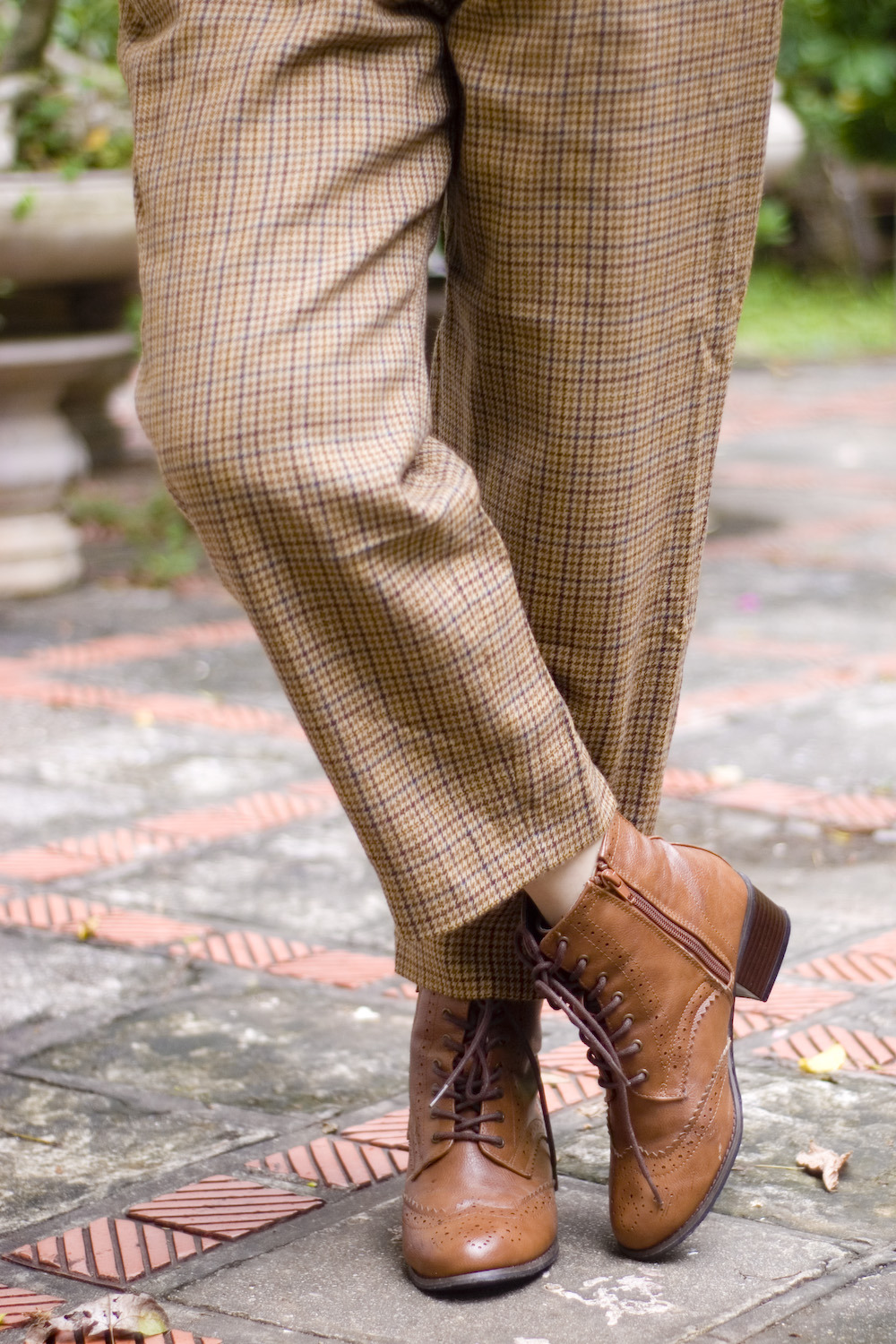 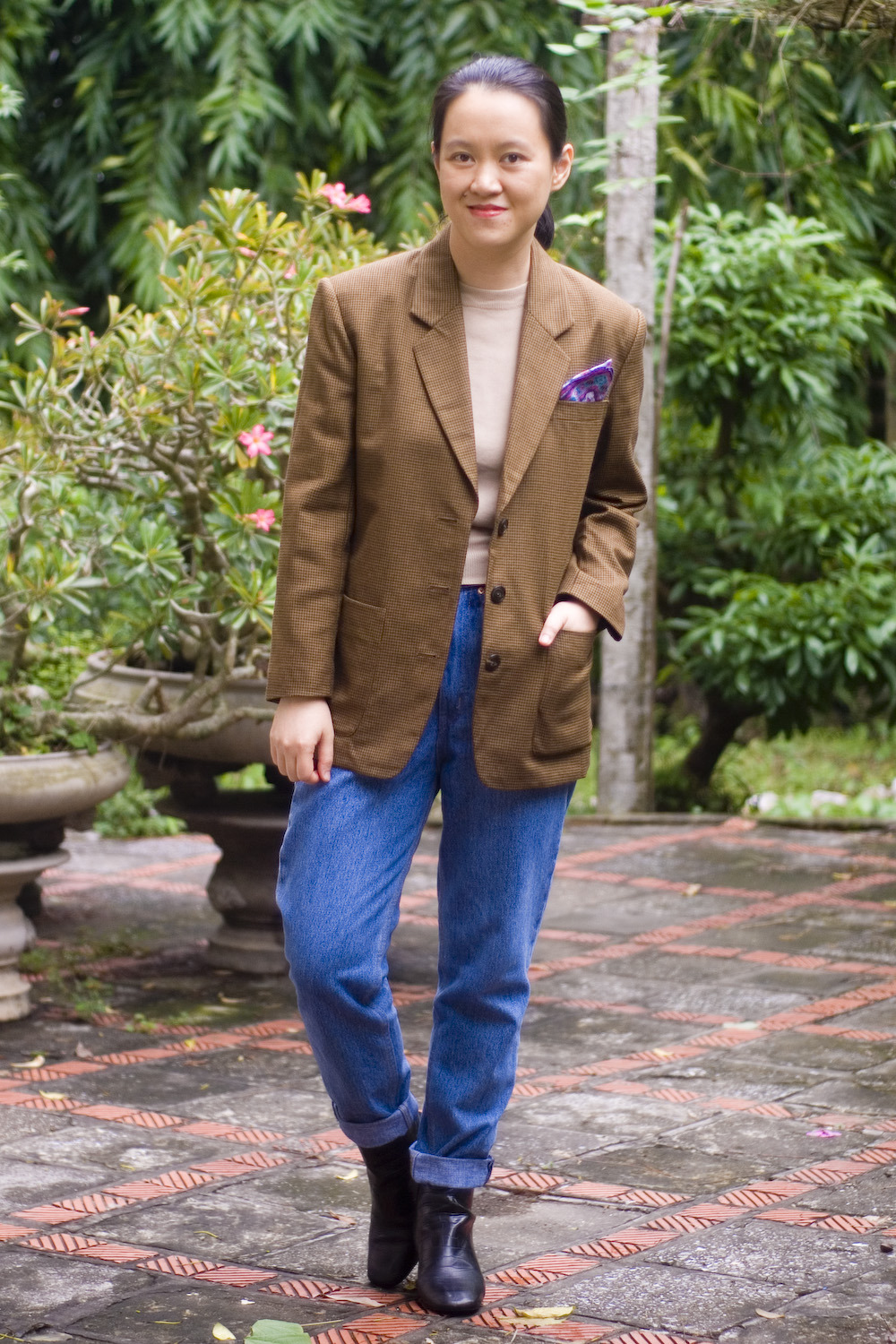 I’ve always loved menswear, but there are two menswear accessories that I have yet to master – the tie and the pocket square. For some reason, whenever I try wearing a tie I look like a waitress/server, and as for the pocket square, I’ve yet to figure out how to fold/tuck it so it looks natural. Maybe the handkerchiefs I’ve been using are too big, I don’t know. Anyway, here’s my latest attempt. The fold/tuck is OK, but I’m not happy with the color. I wanted to break away from the sea of brown that is my fall/winter wardrobe, but this color combo just doesn’t work (at least it matches my jeans?) Oh well. Back to the drawing board… 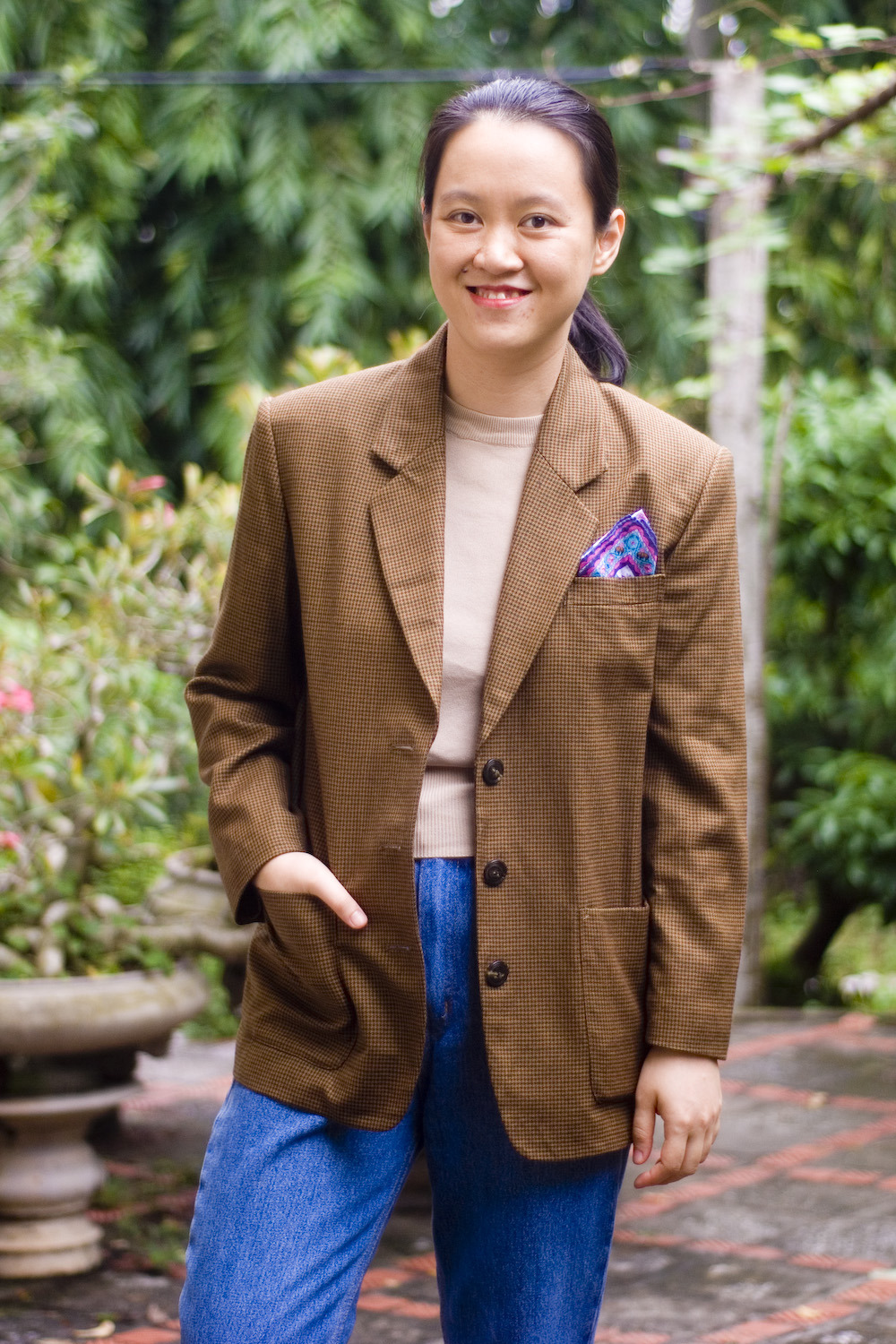 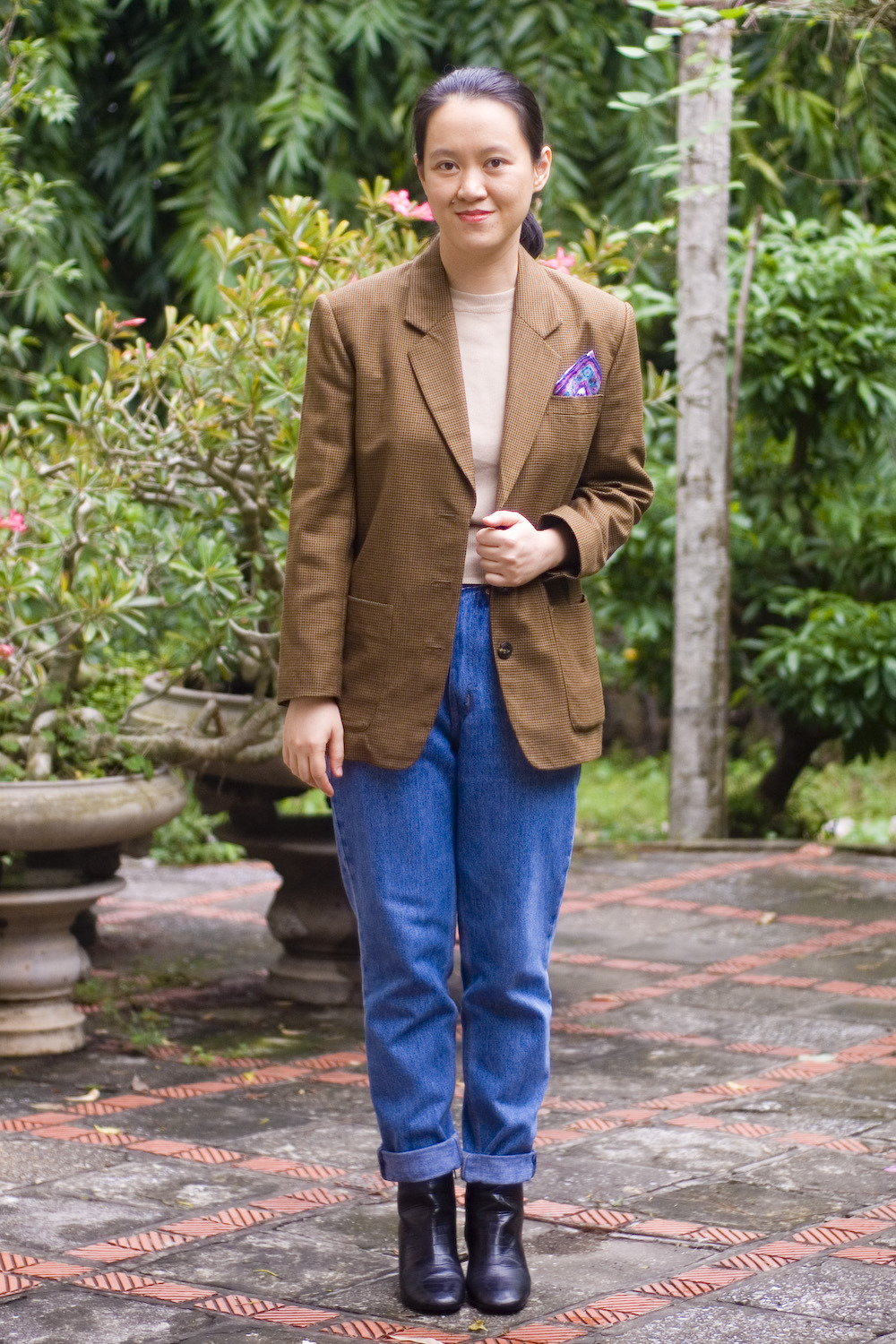 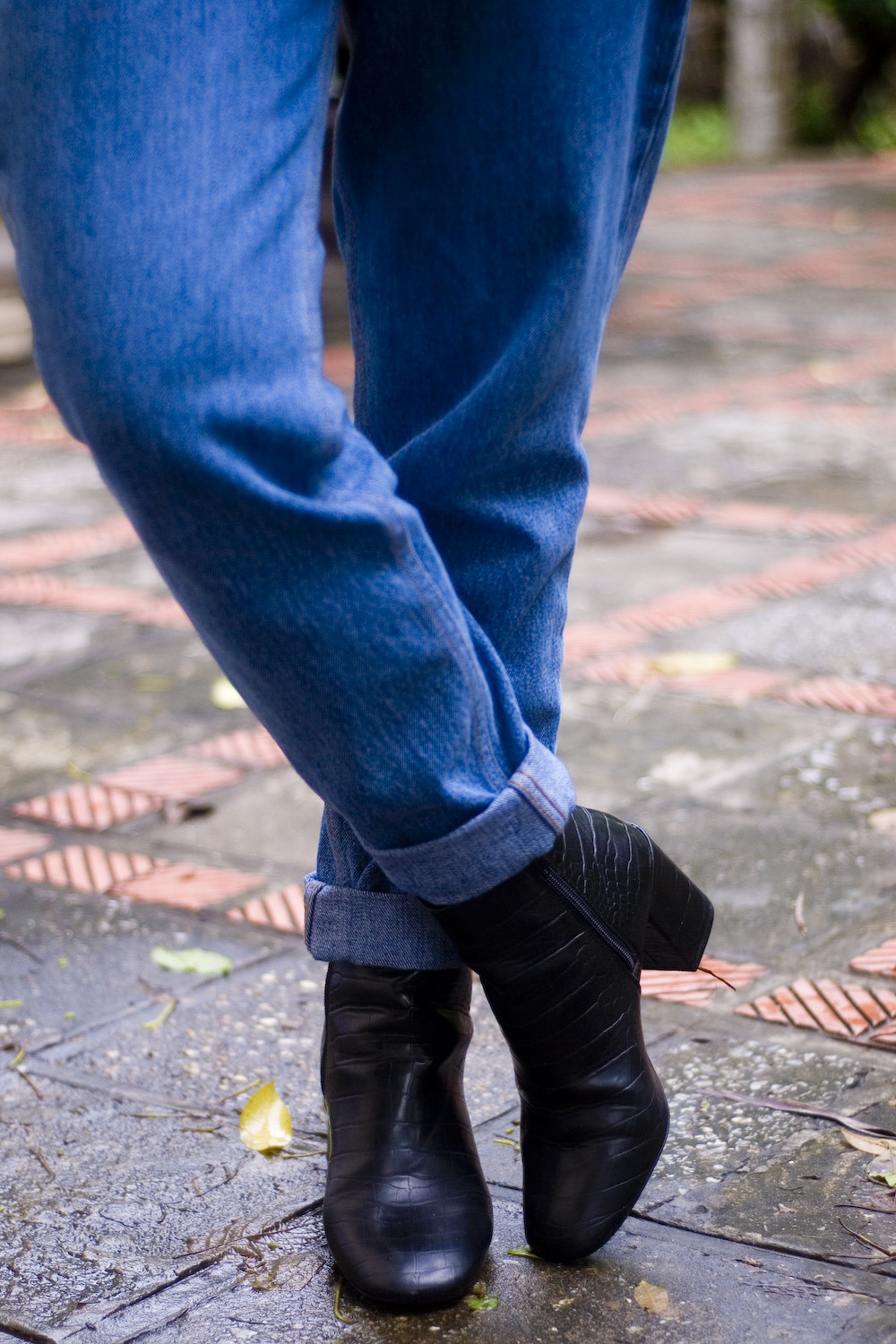 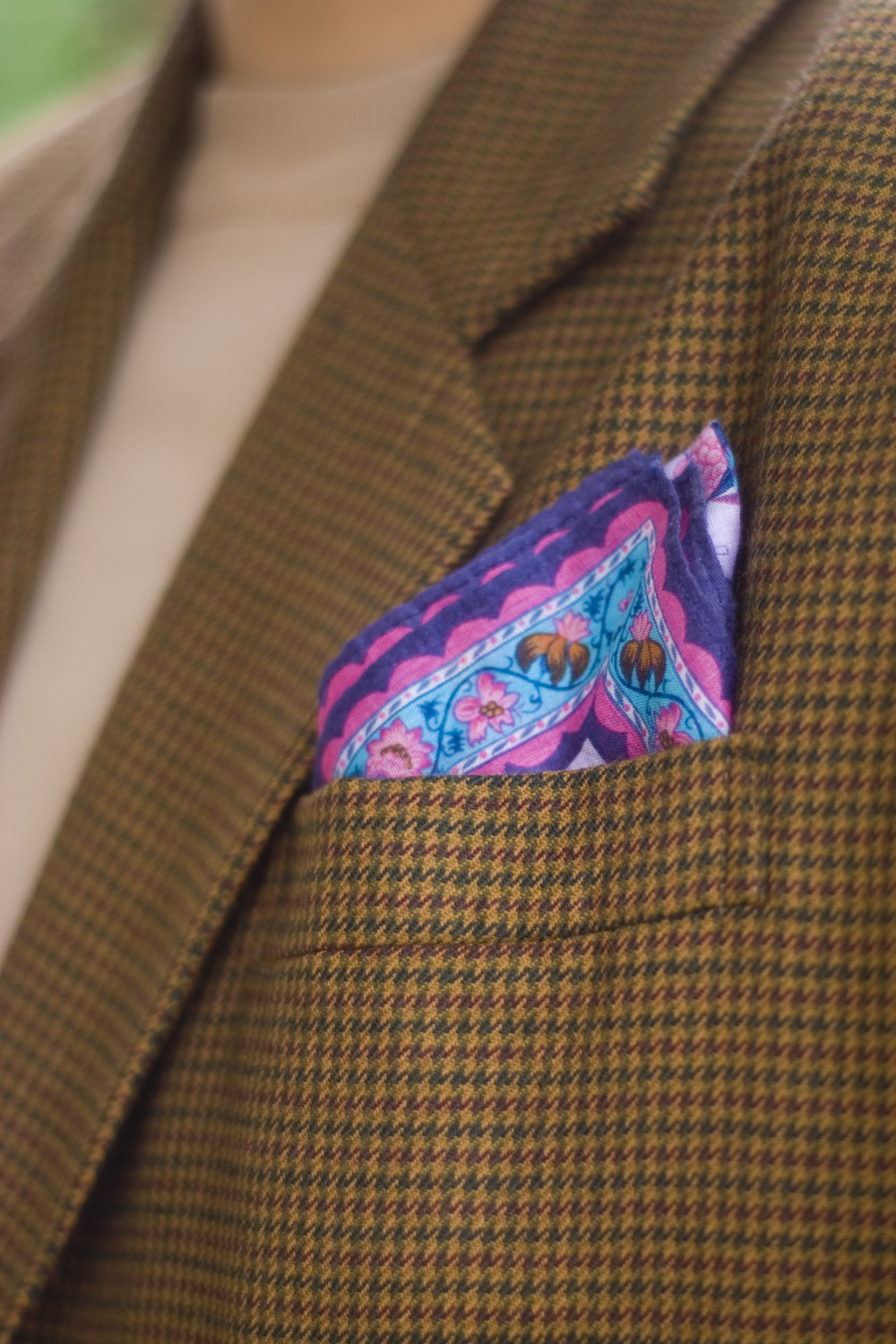 Sheep By The Sea 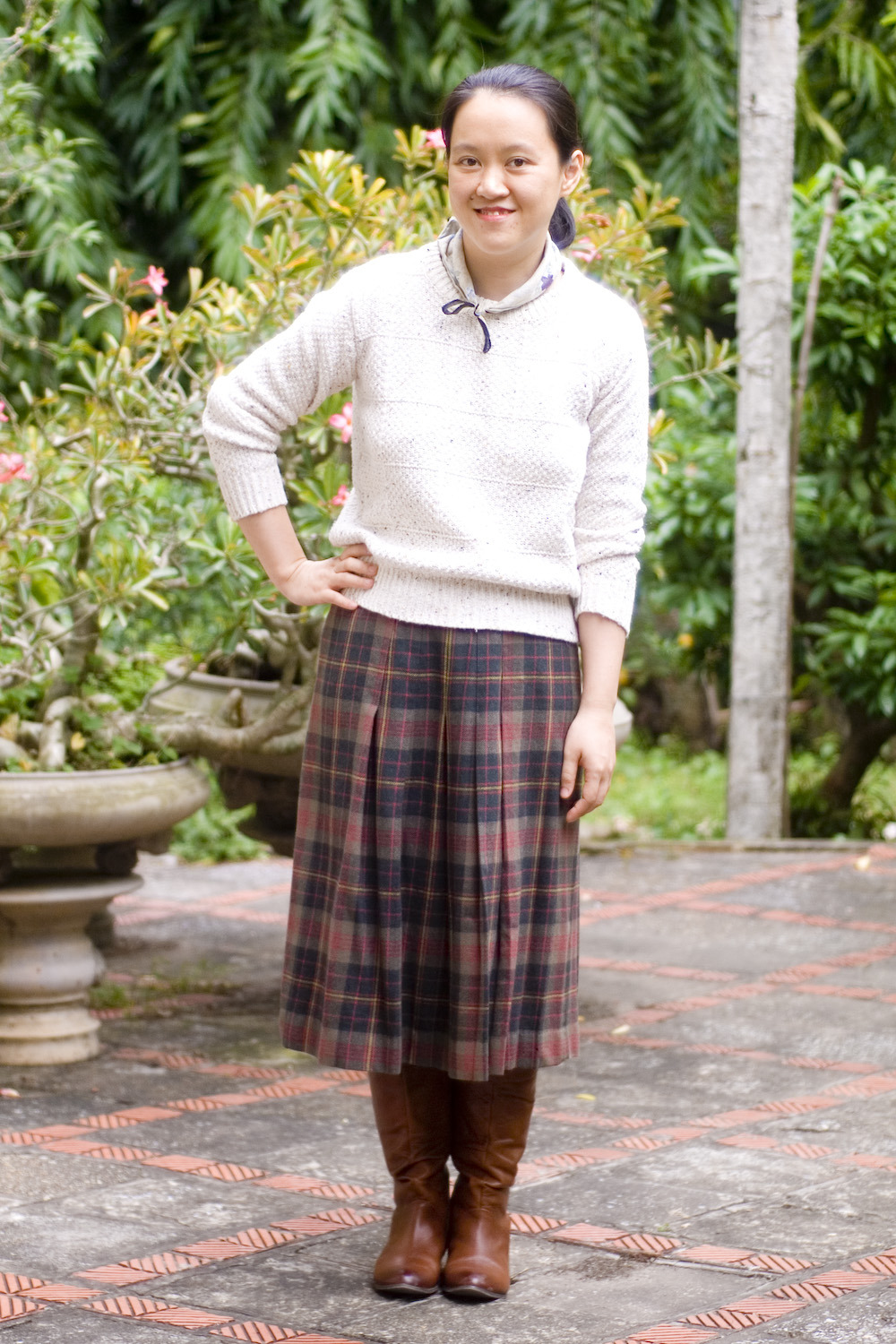 It’s SIA time! The inspiration this week is Rosa Bonheur’s “Sheep by the Sea”, and by a stroke of luck, we just had a cold snap this week, so here I am, in sweater and wool culottes and boots – unimaginable, considering this time last year I was still wearing a single layer. The cold snap is not going to last long, but even then, the weather is not warming up too much. It looks like we’re going to get some proper fall weather this year, hurray!

Anyway, back to the outfit. I knew I’d wear this sweater, which perfectly captures the color and texture of the sheep’s woolly coats, but the rest of it took some thinking. Eventually, I remembered this pair of culottes, since they have the brown and green of the background in the painting. Plus the tag says Glen Prince (from what I can gather it’s a British wool company), which is very apt, considering the painting is supposedly of the Scottish Highlands. Finally, I added a little neckerchief to mimic the blue sky, and these boots to finish the outfit. I was trying to pull off the whole “Queen Elizabeth II at Balmoral” look, not sure if I succeed, but I like it.

Don’t forget to drop by Terri’s blog on Wednesday to see other outfits inspired by this lovely painting! 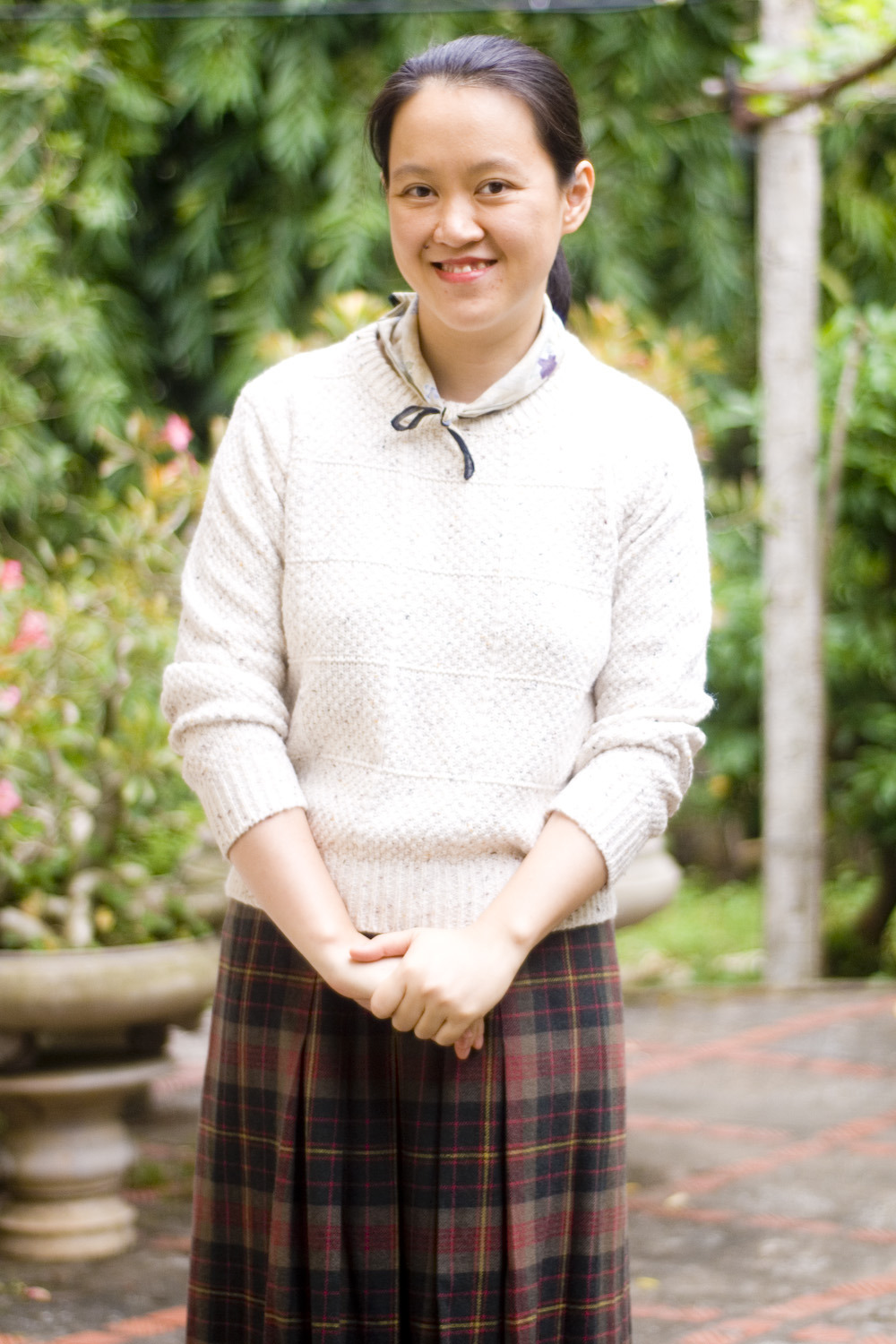 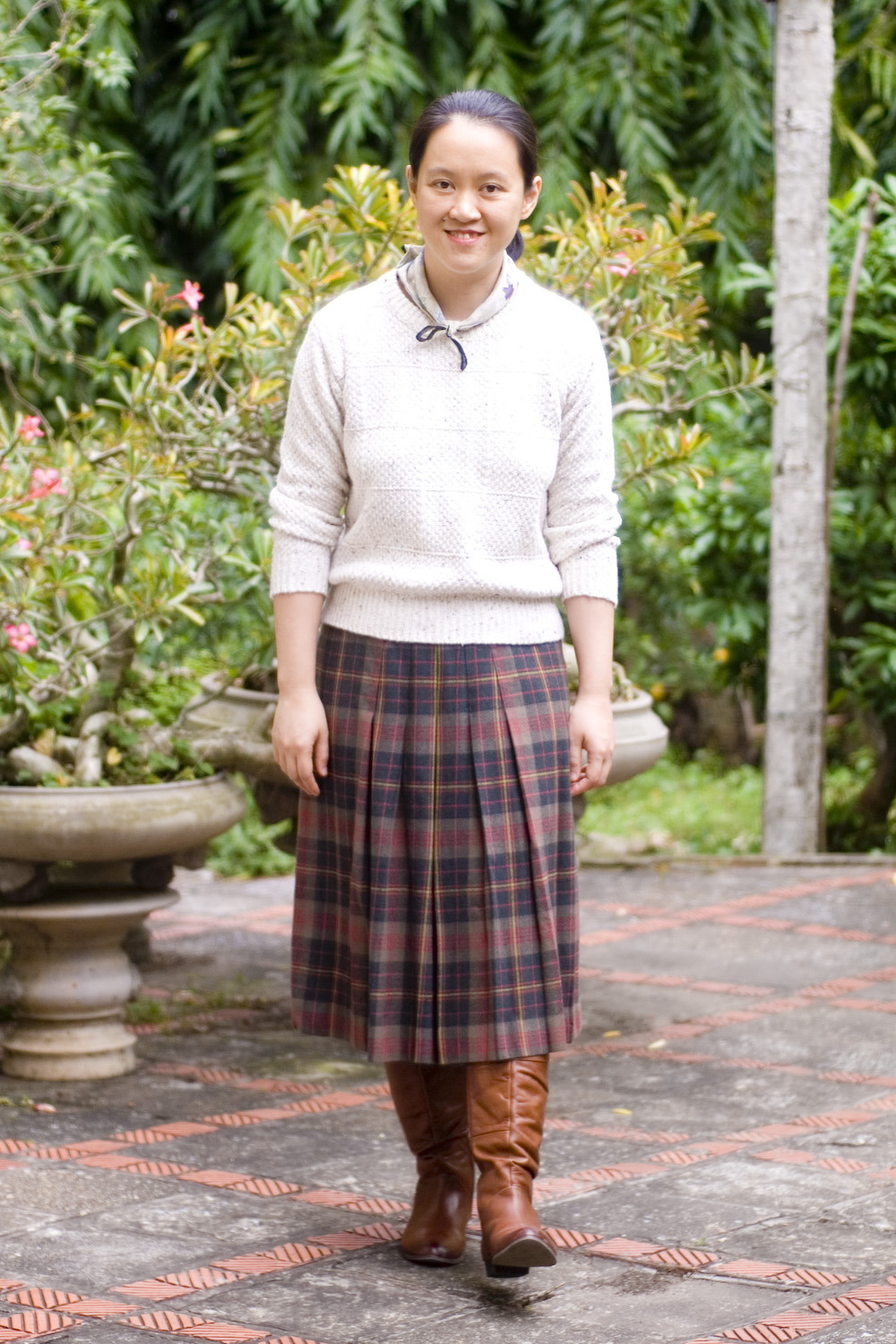 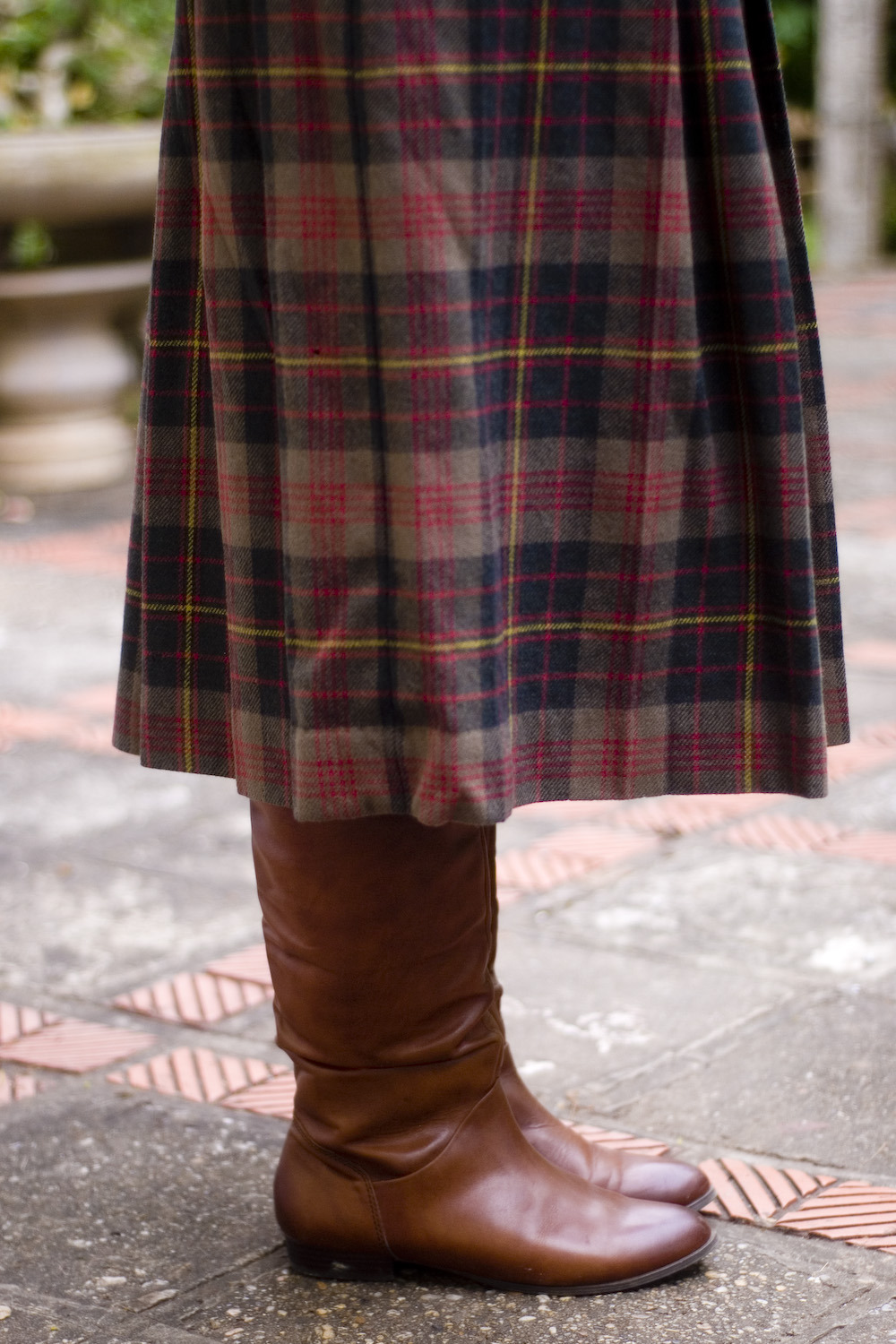 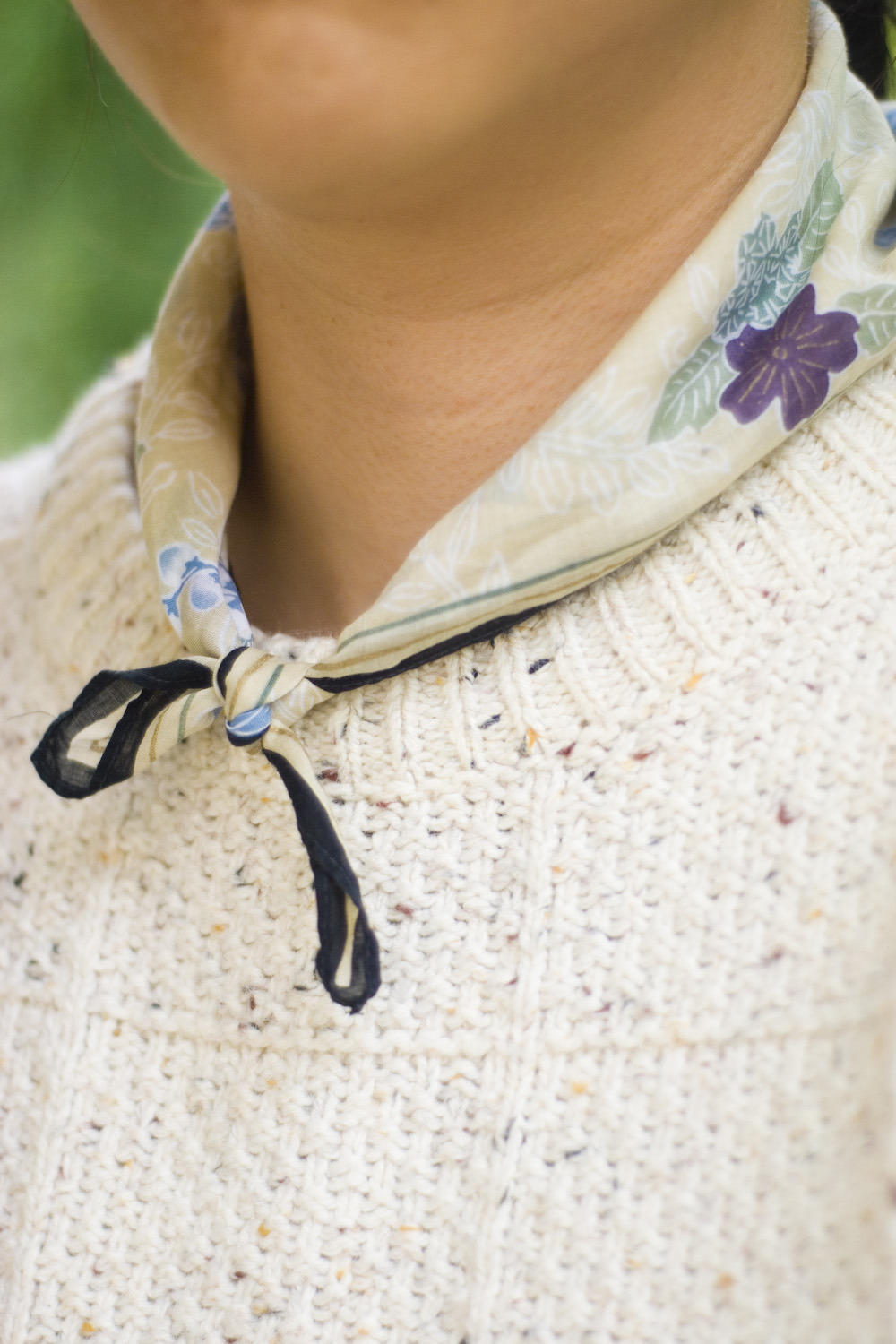 Summer, But Make It Fall 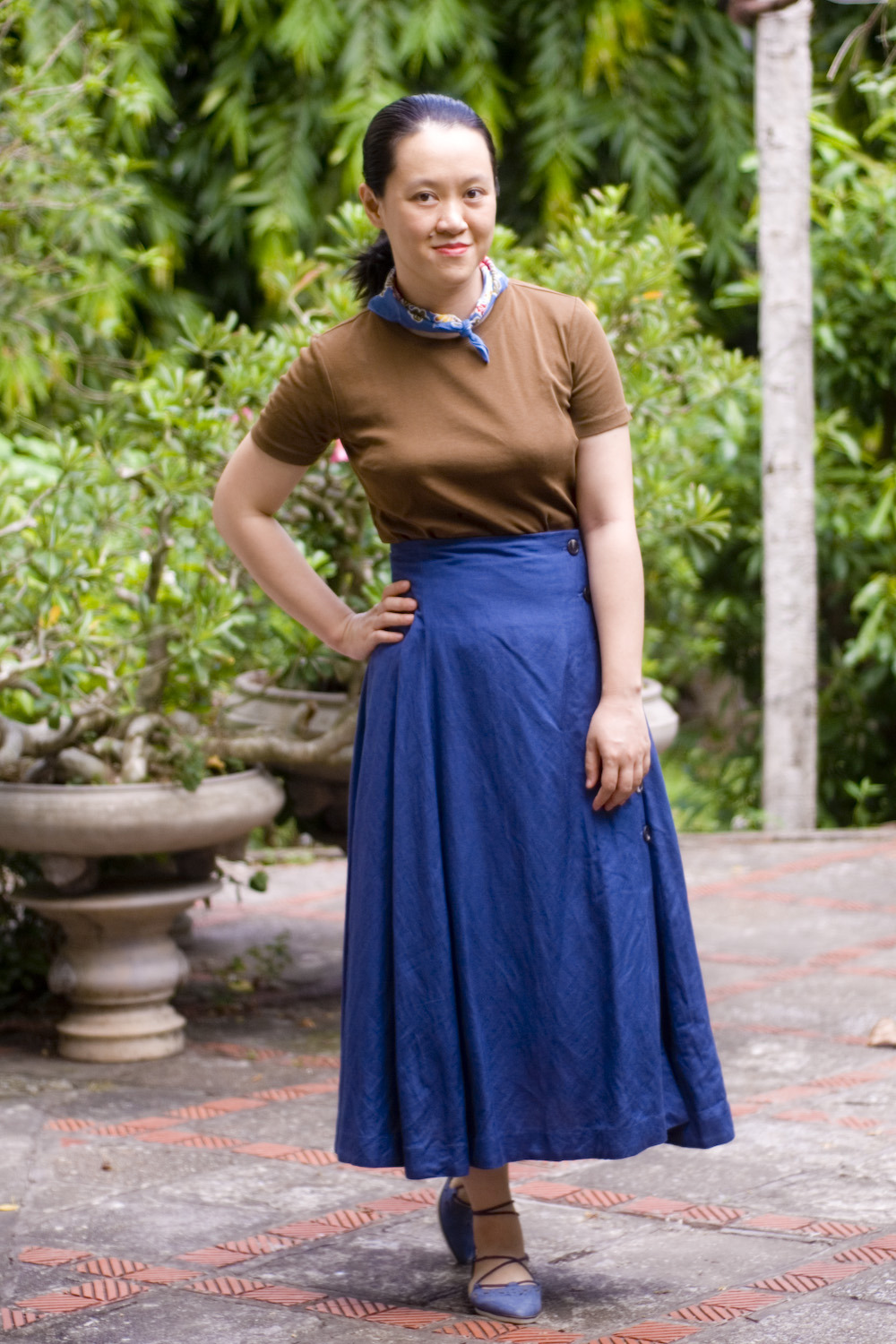 It’s still pretty warm over here, but there has been the tiniest hint of fall in the air – the sunlight is less scorching, and at night, it starts to get a bit chilly. So although I’m still wearing summery clothes (T-shirt, linen skirt, and flats), I had to add a nod to the fall with the brown T-shirt (if this was during the summer, I would’ve worn a white top) and the little scarf. Brown and blue is not a combo I wear very often, but it doesn’t look too bad, does it? 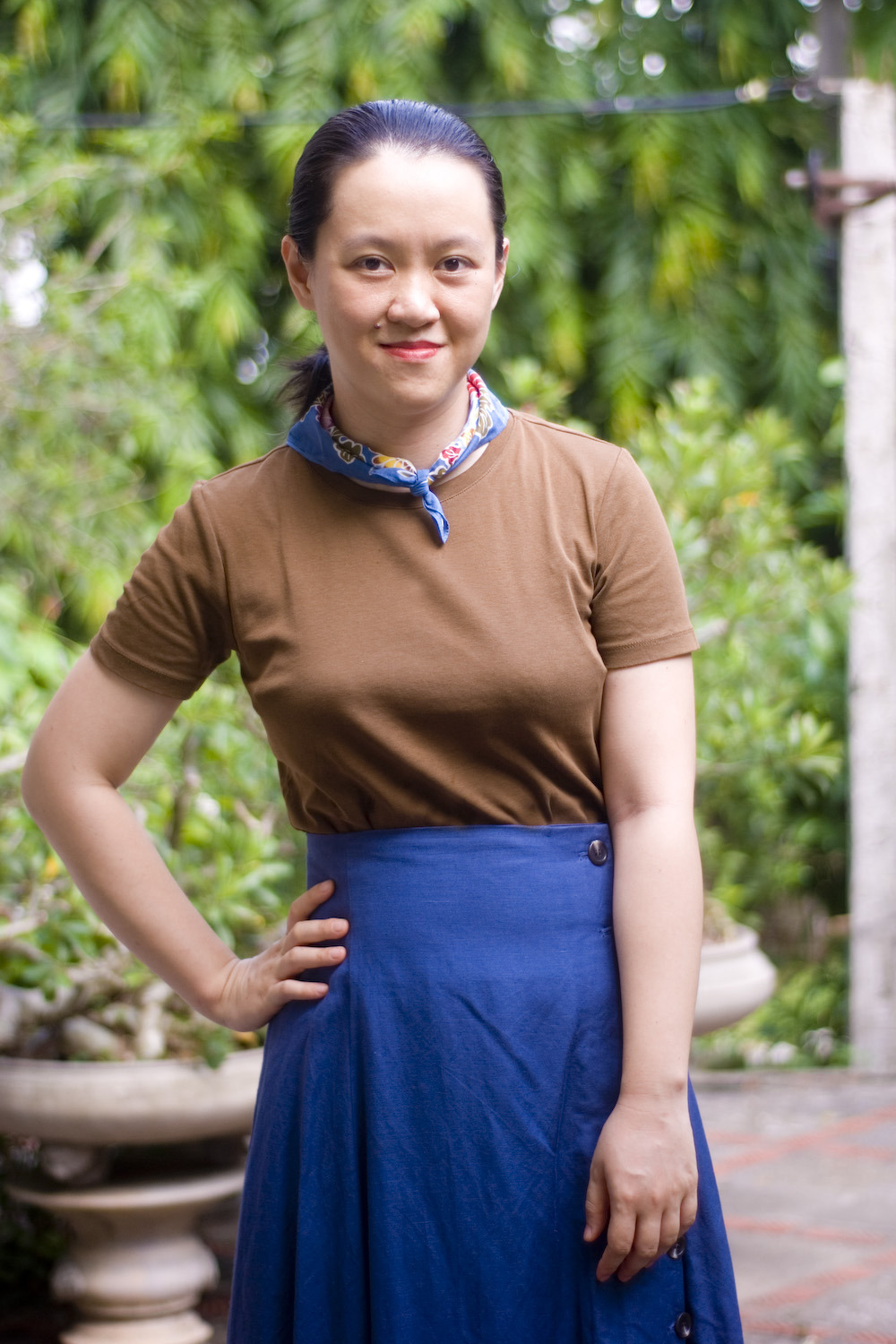 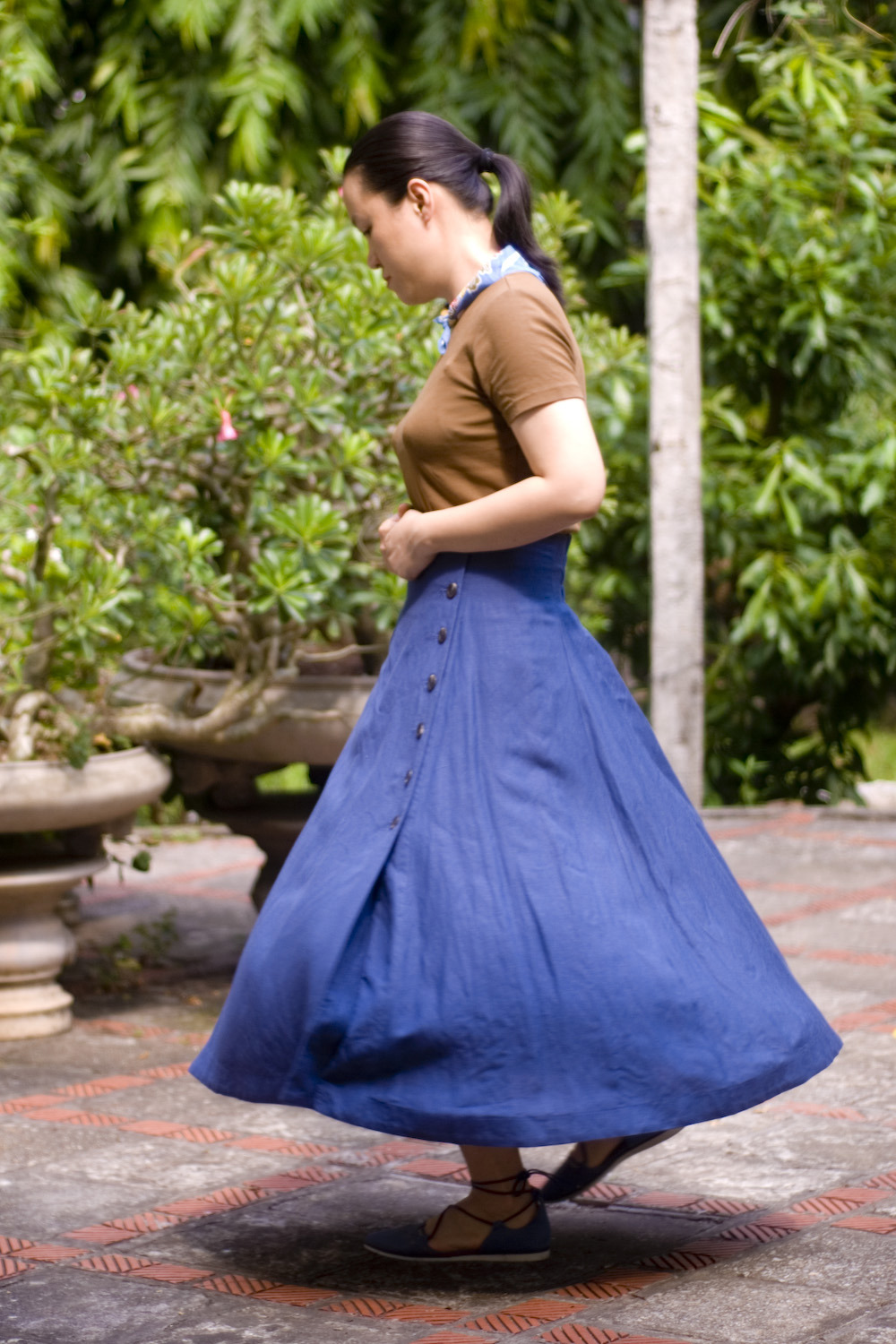 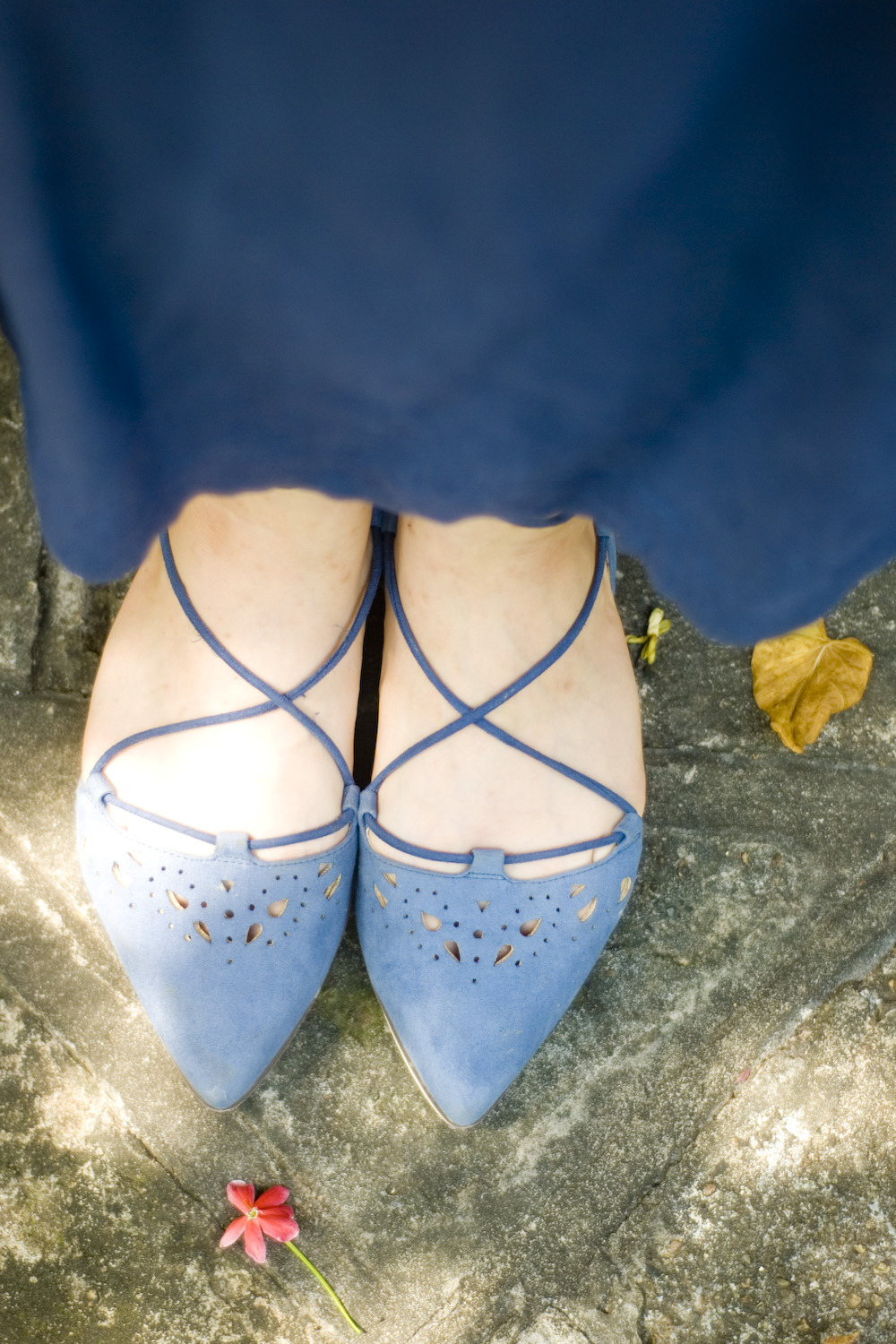 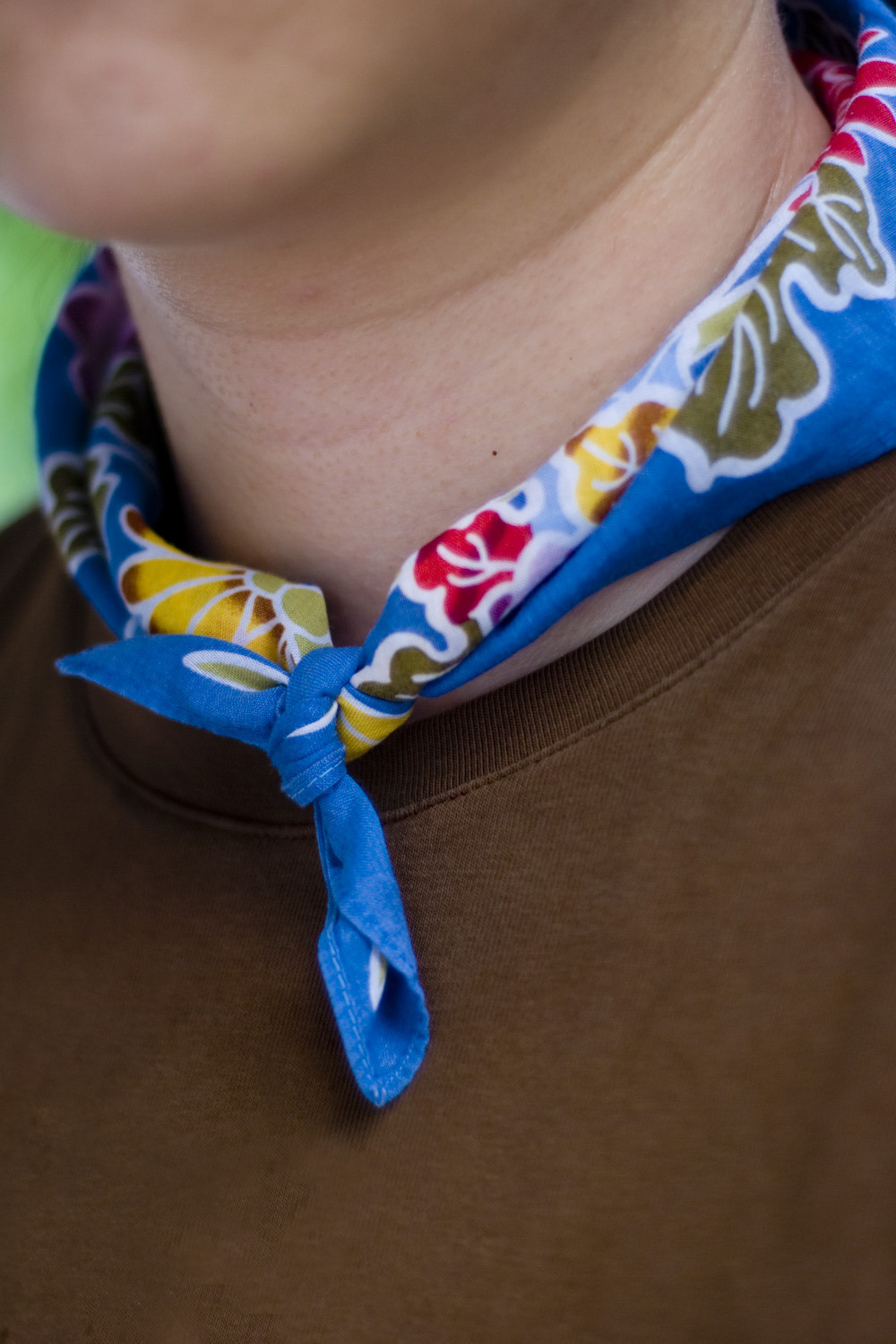 Not Born In The USA 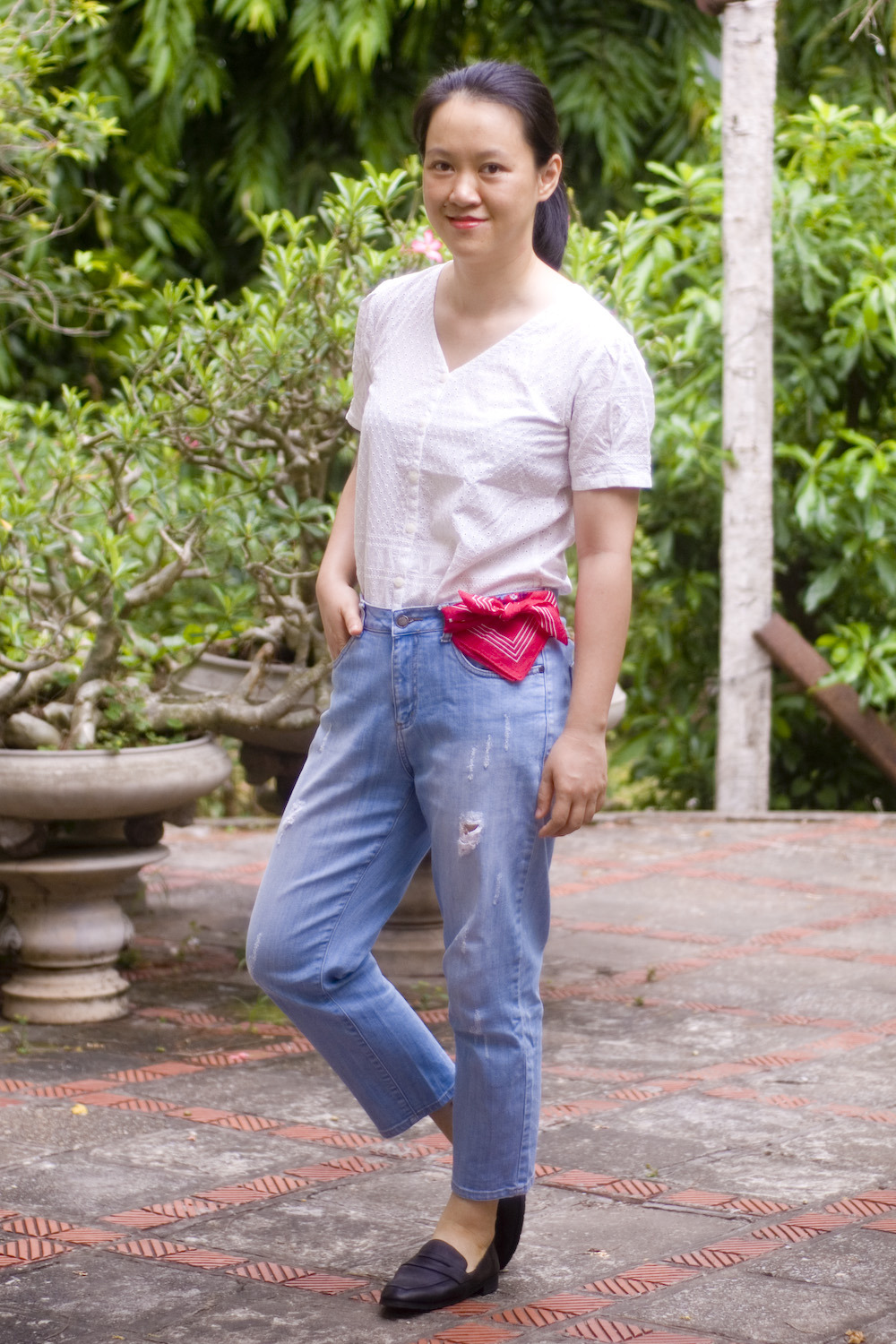 Here’s another of my attempts to dress up a top and a pair of jeans. I saw the idea on a Japanese style blog and thought it a super fun, unexpected way to wear a scarf/handkerchief, and it can save you from having to wear a belt too. It wasn’t until I started editing these photos that I realized the close-up shot looked rather familiar. And then it hit me: it looked a bit like the cover of Bruce Springsteen’s Born in the USA album (hence my post title) – just a little bit, mostly in the color scheme and the framing. I never listen to Bruce Springsteen, but that’s such a well-know album cover that I guess I was subconsciously influenced somehow. 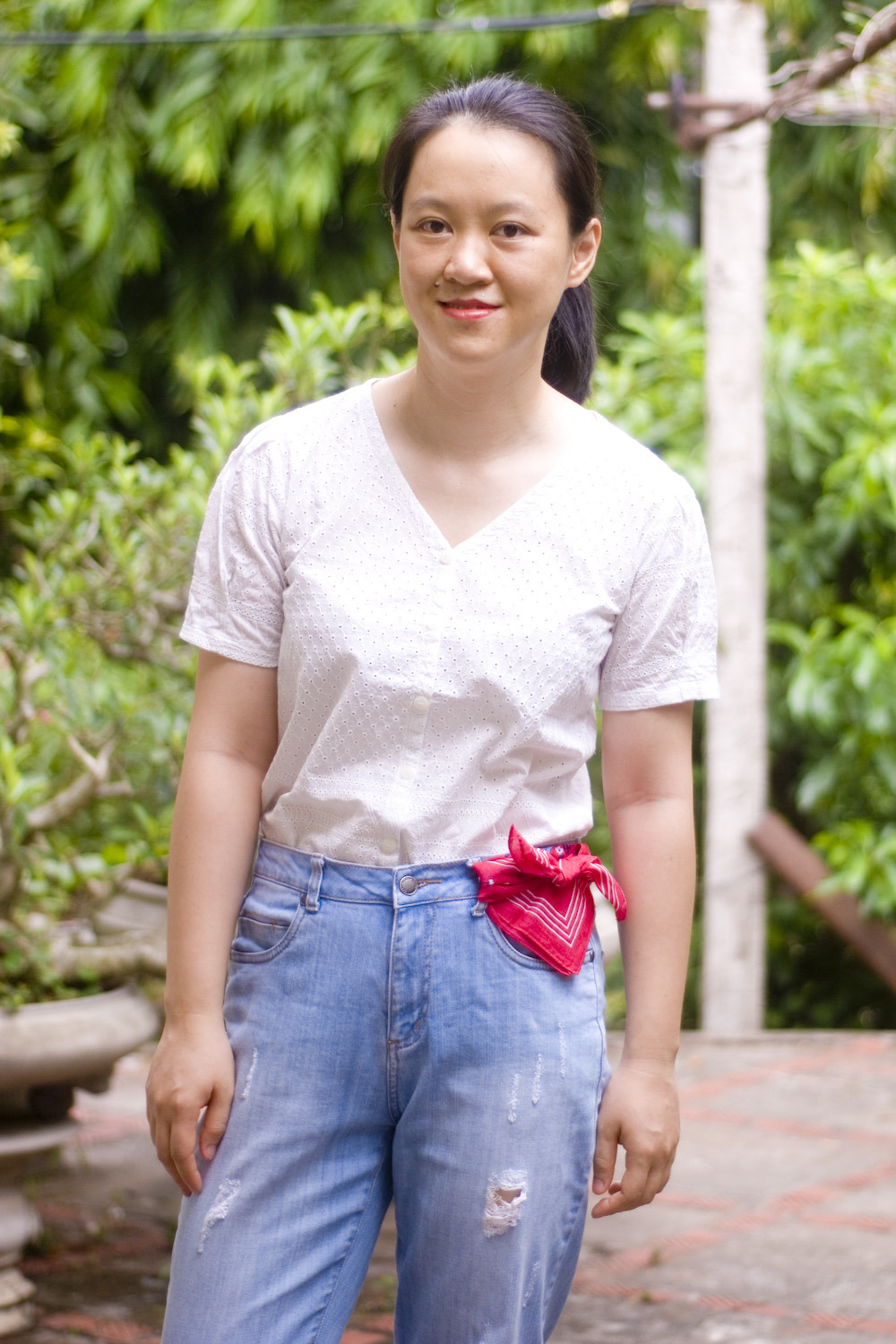 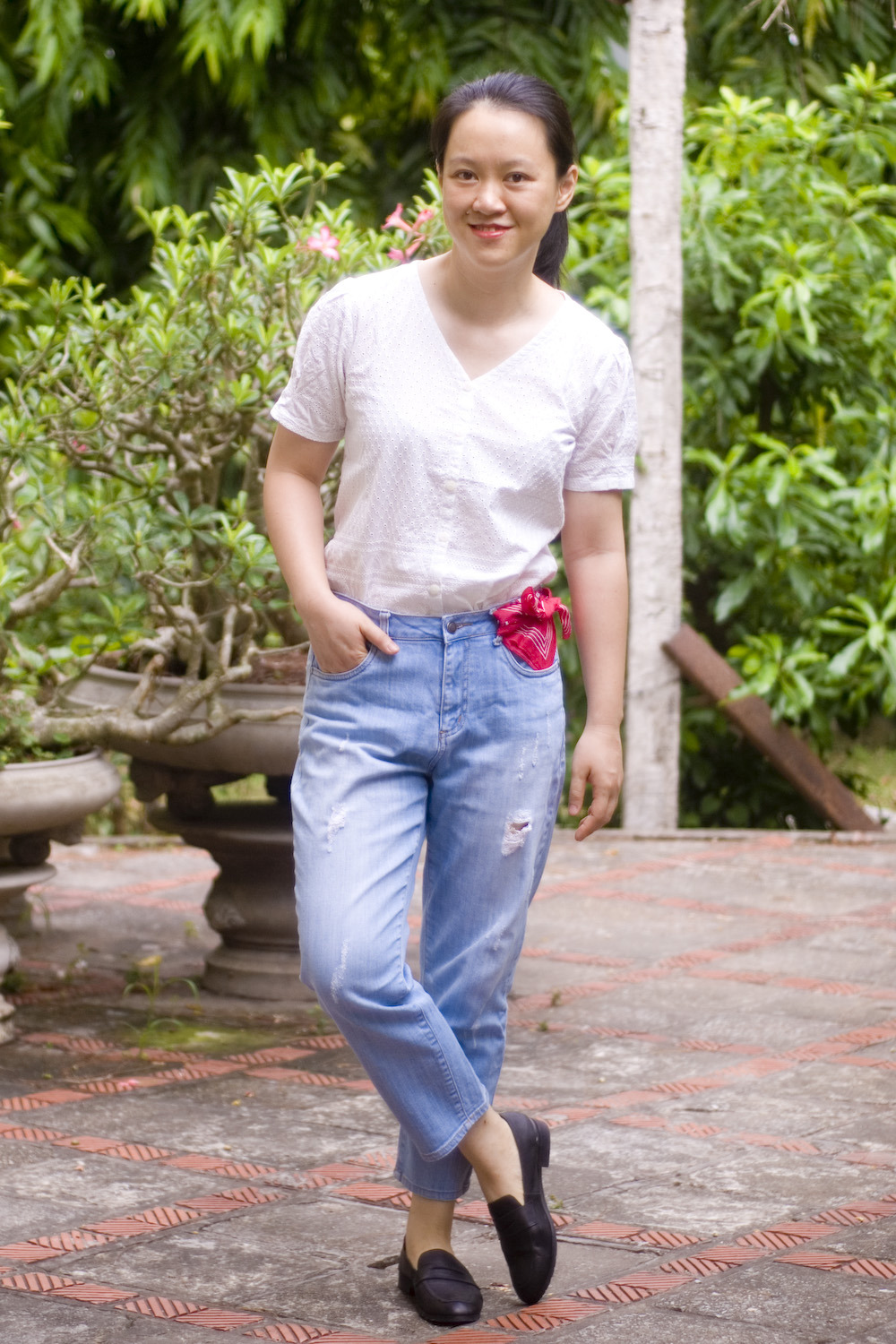 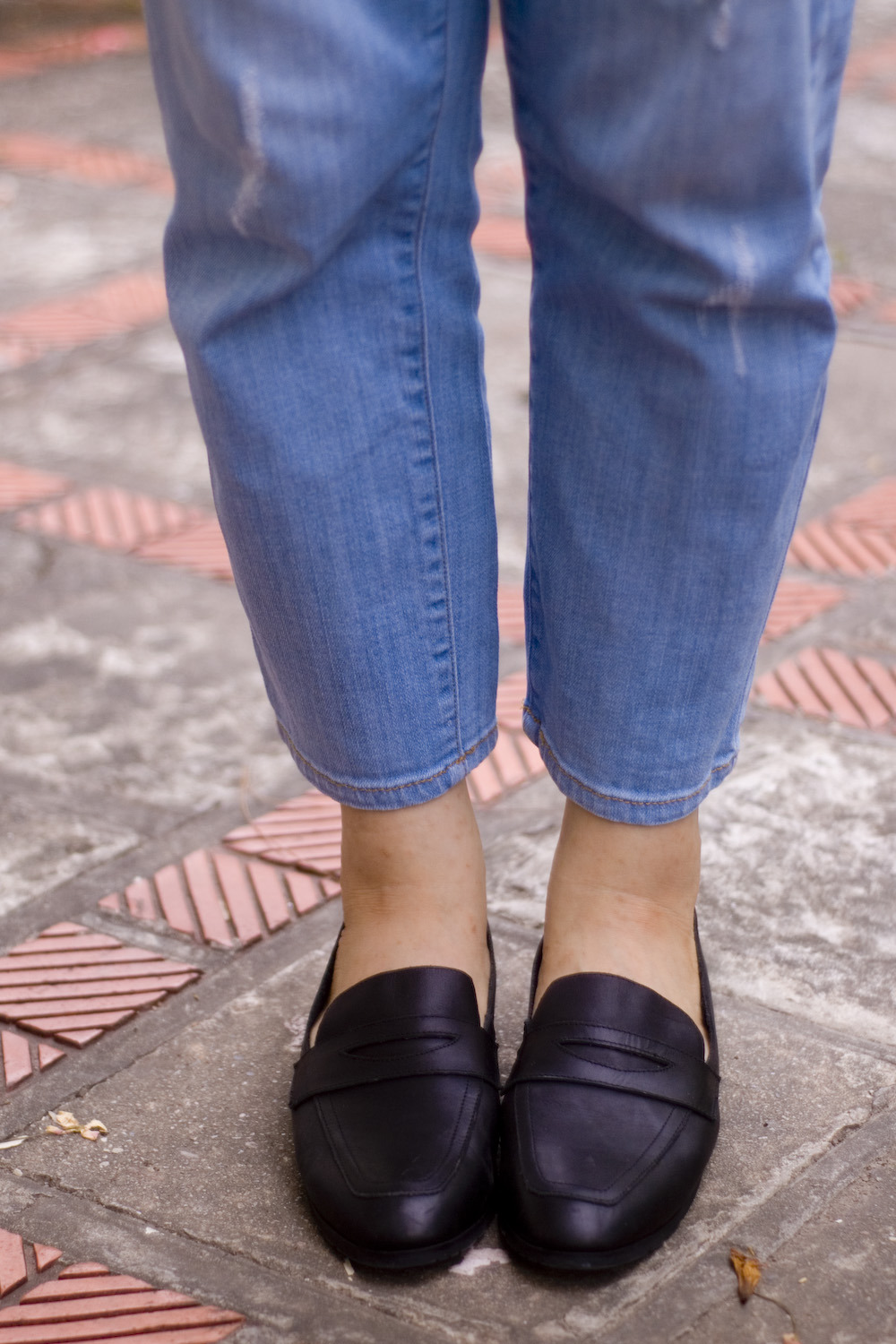 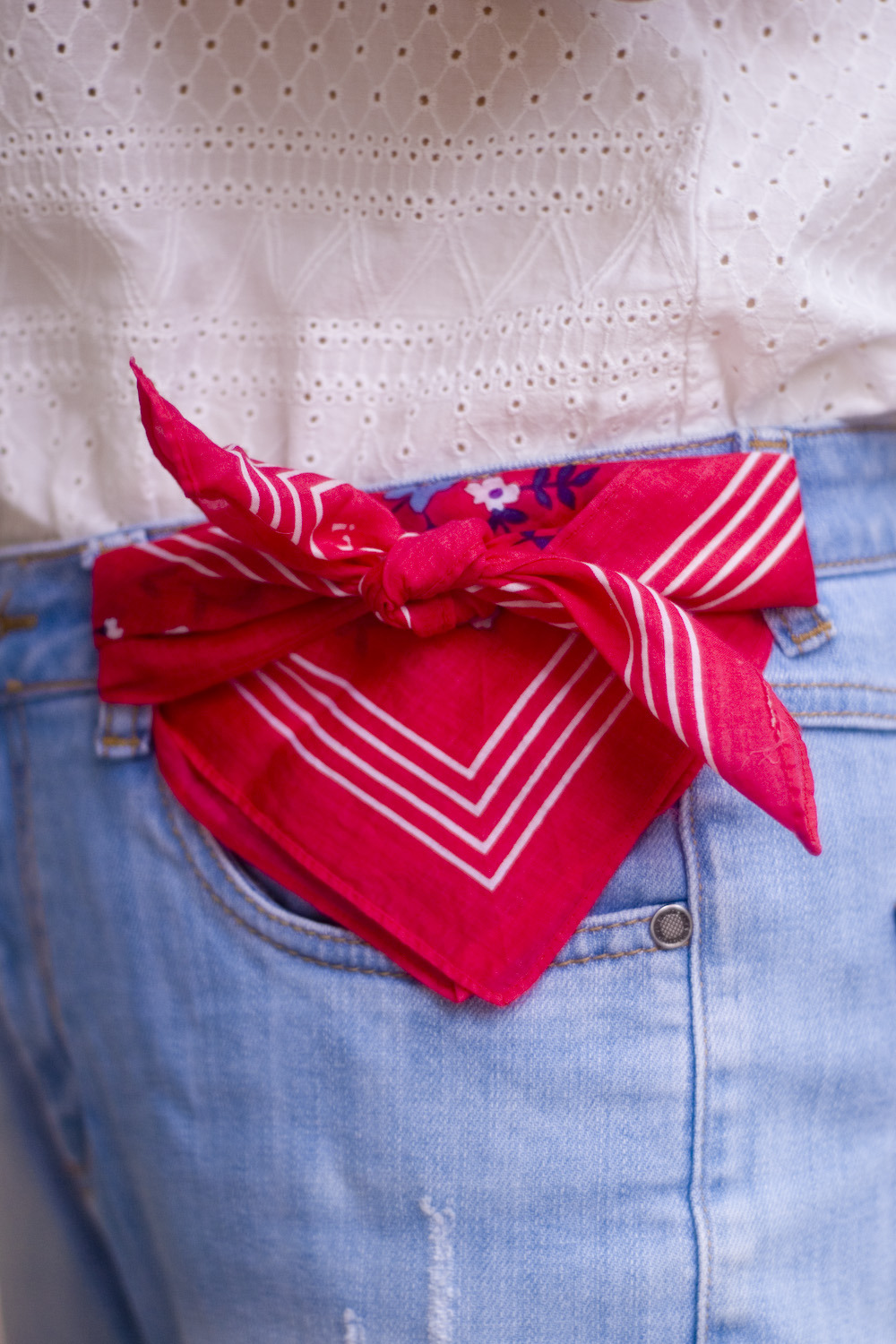