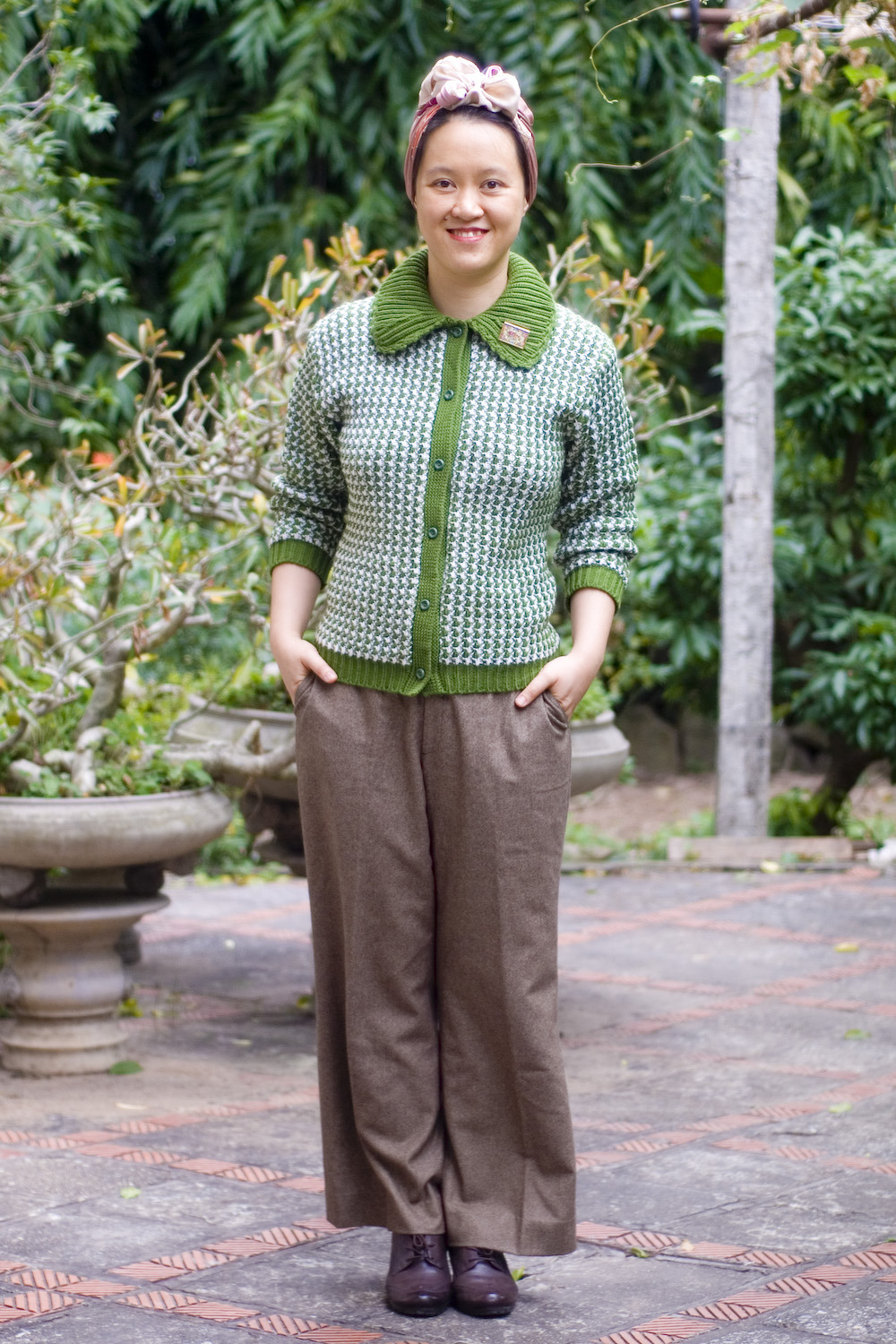 Here’s my outfit for this week’s SIA, inspired by Albert Marquet’s “Girl Embroidering, Seated in a Garden“. I knew I’d wear this cardigan and brooch for the green color and the embroidery part, but there is a bit of pink in the painting that I struggled with – I don’t have a lot of pink in my closet, and those pink pieces that I do have don’t really go with the outfit I had in mind. Then I remembered this scarf, and instead of wearing as a normal scarf (which wouldn’t work with this cardigan anyway), I decided to try something new and wear it as a headscarf instead. The cardigan and the headscarf kind of remind me of those WWII outfits that women often wore to work in factories and farms (like these), so I finished off the outfit with my wide-leg pants and oxfords to complete a 1940s looks. A bit different than my usual, but I like it.

Don’t forget to check out Daenel’s blog on Wednesday to see other outfits inspired by this painting! 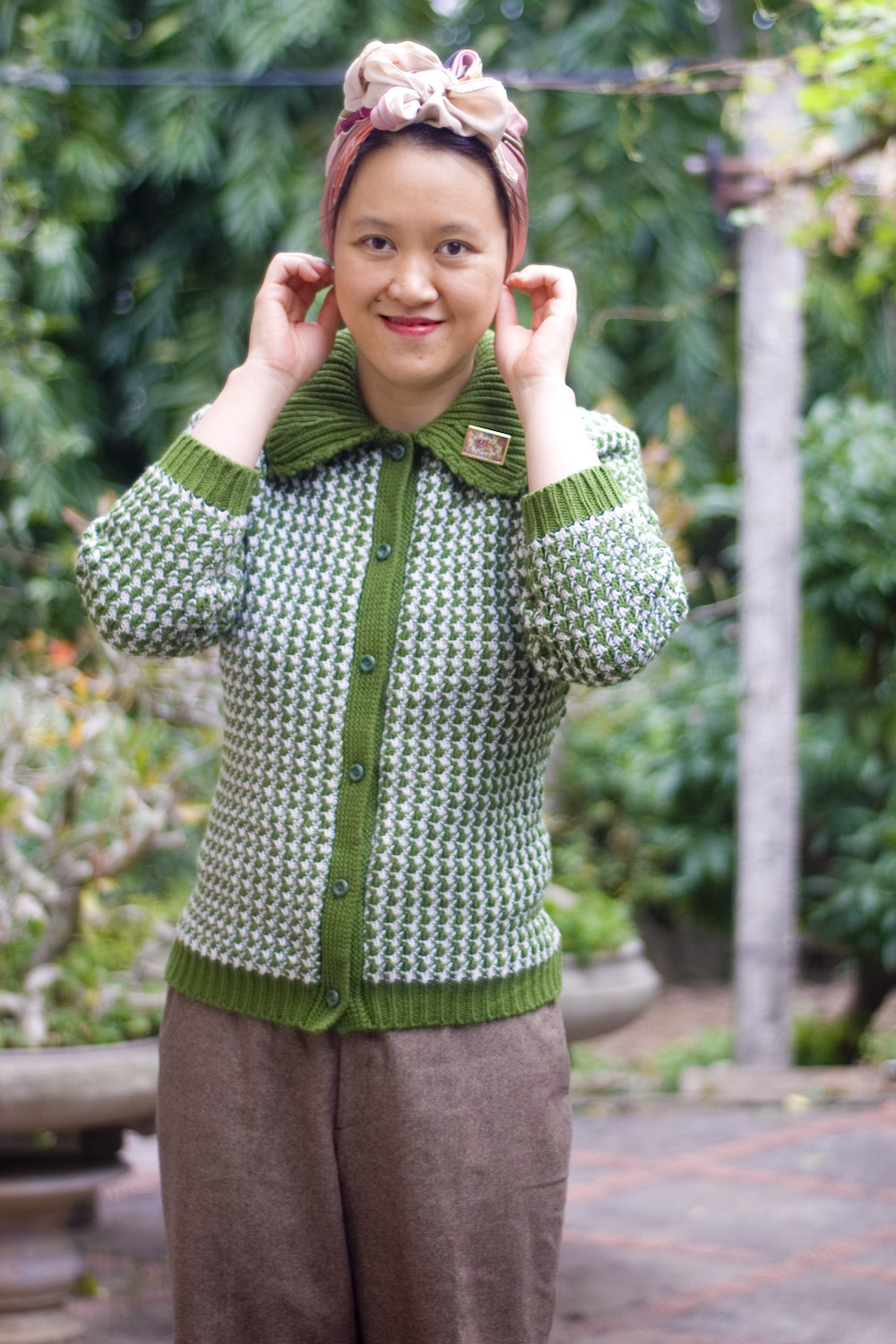 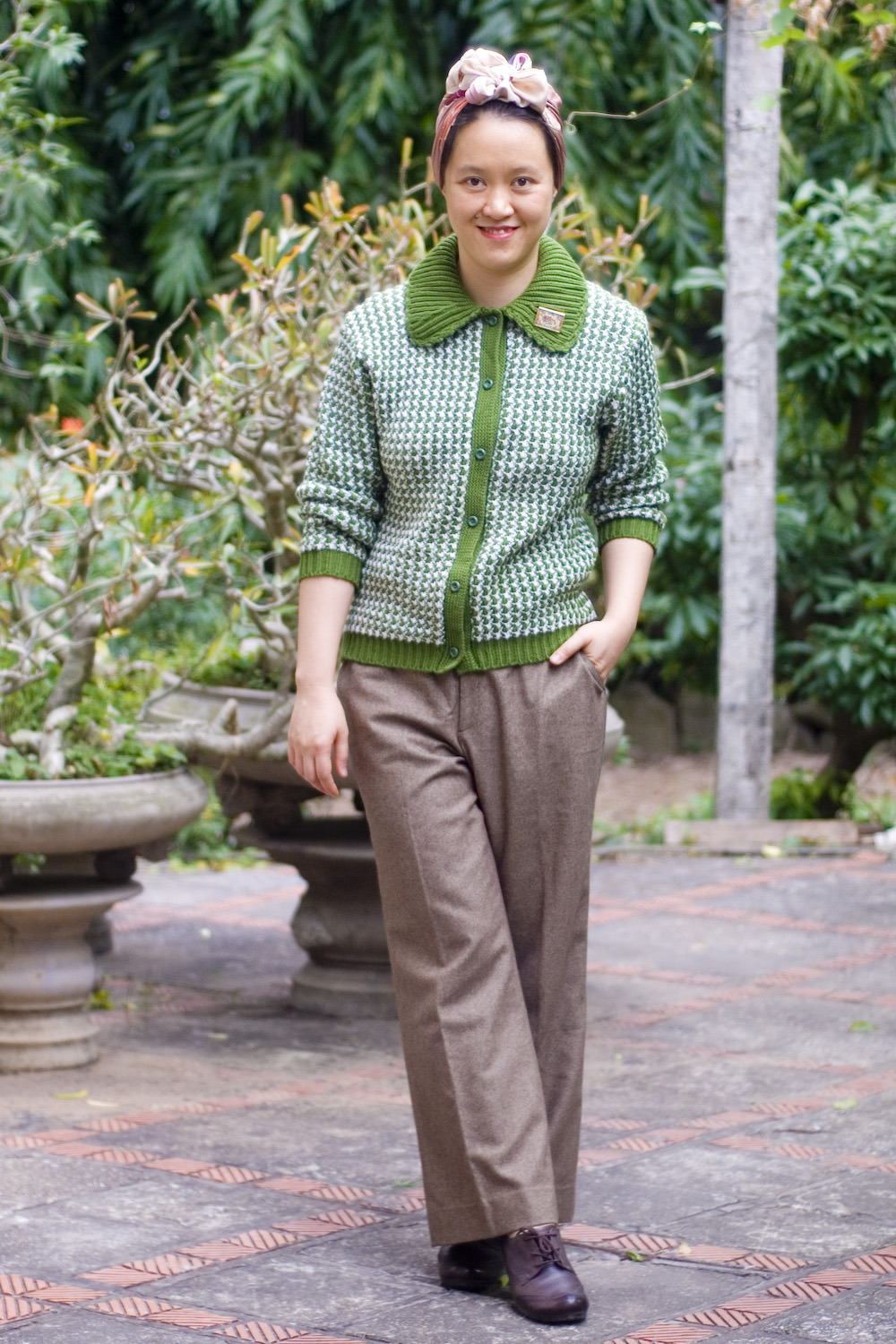 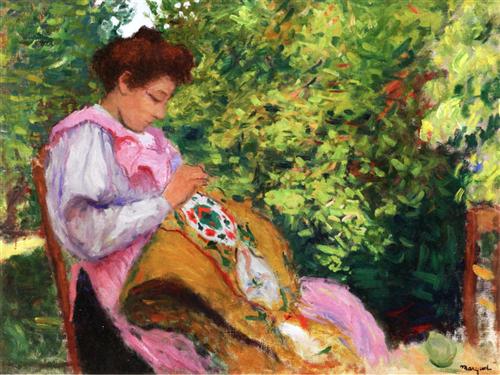 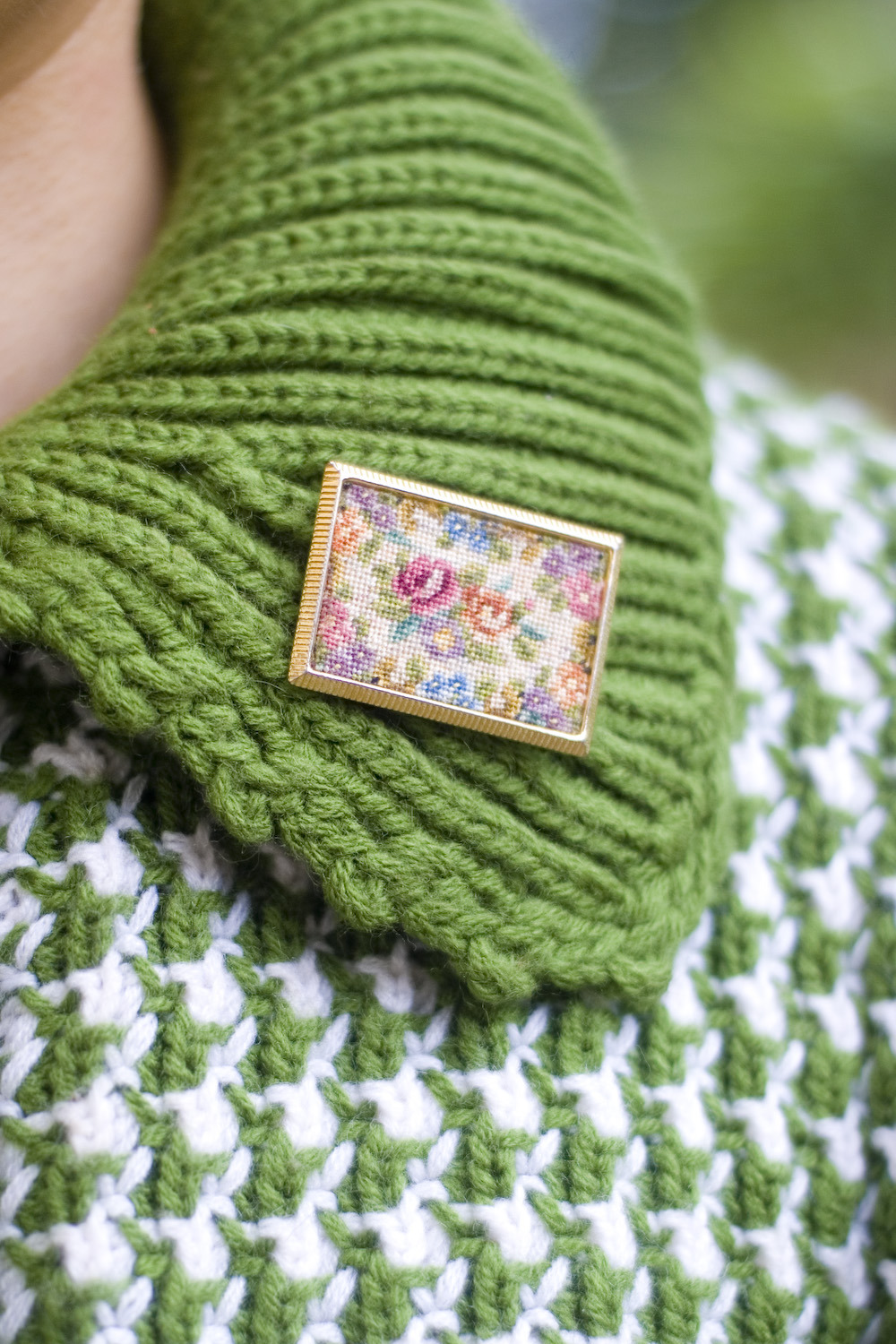 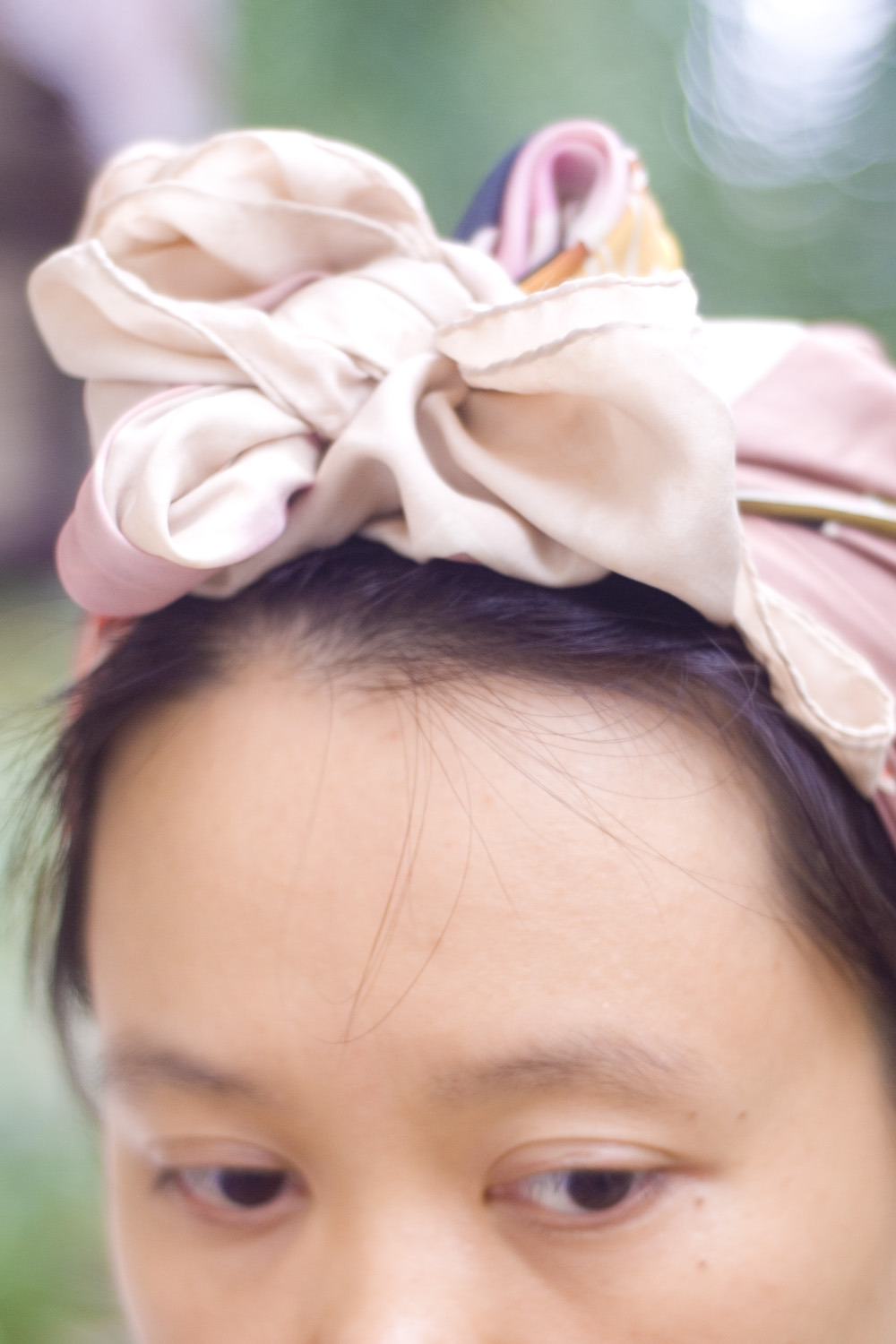 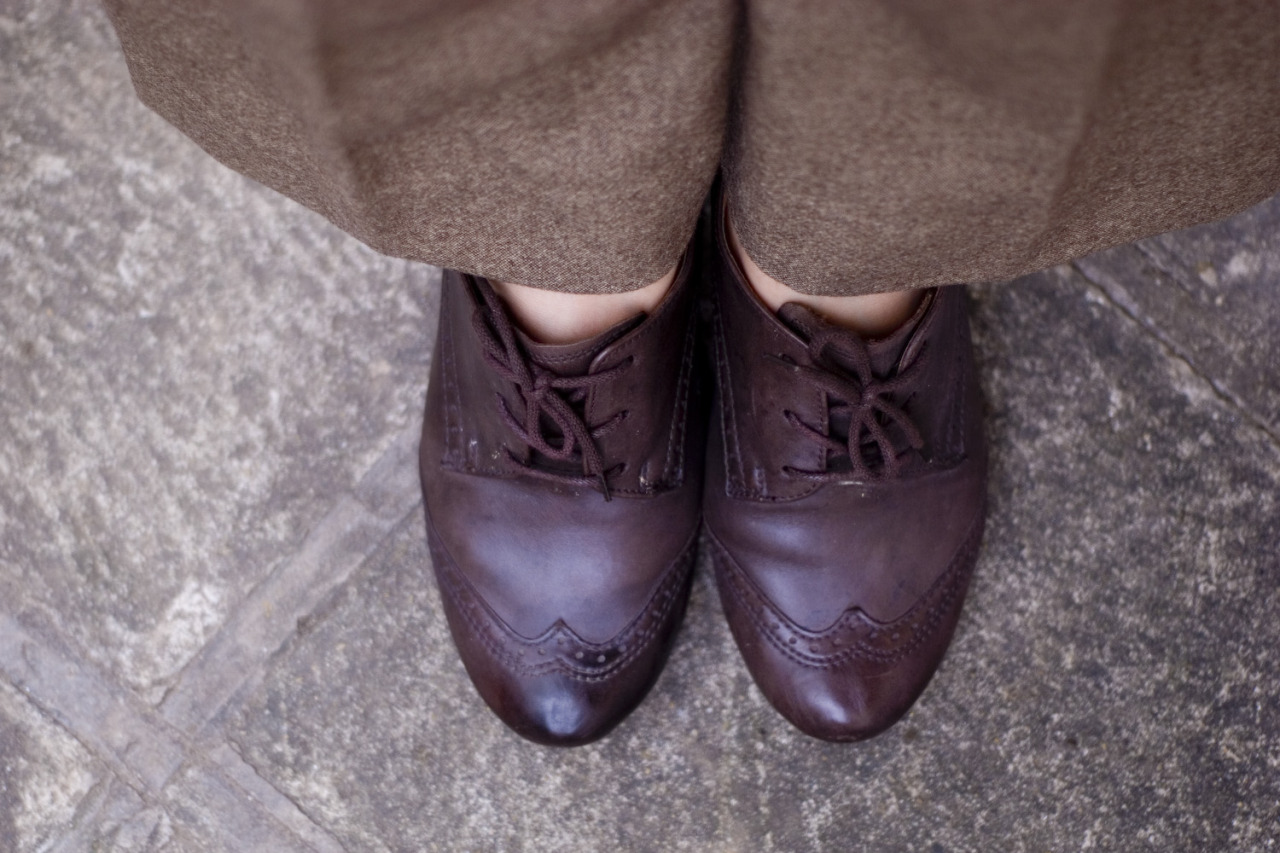 How serendipitous is this? It’s St. Patrick’s Day, and the latest book I read happens to be a murder mystery set in Ireland. I swore I didn’t plan this (OK, maybe just a little. I was supposed to post the SIA inspiration today but I saved it for tomorrow.)

Anyway, “Three Bags Full” by Leonie Swann (the author is German, I read the English translation by Anthea Bell) is about a flock of sheep in the small town of Glennkill in Ireland. After discovering their beloved shepherd dead on the meadow with a spade stuck into him, they decide to find the killer. Led by the smartest sheep of the flock, Miss Maple, the investigation uncovers all sorts of secrets lurking beneath this seemingly idyllic Irish town and forces the sheep to face their own fears.

I picked this up on a whim, because I thought the premise sounded awesome, sort of like Babe meets a crime thriller. The story itself is not as funny as I hoped – it’s more philosophical, full of allegories about religion and mortality (shepherd, God, it’s a natural connection), but it’s still really enjoyable. The sheep’s literal interpretation of human actions makes the symbolism fun instead of trite, and although the resolution feels a tad too easy, there are enough red herrings that I didn’t see it coming.

Apparently there is already a second book to this Sheep Detective series, but it hasn’t been translated into English yet, which is too bad, because I figure out this is the kind of book that I would enjoy: a mystery with a bit of a quirky twist. Like The Curious Incident of the Dog in the Night-time, you know? That is still pretty specific, but now at least I know what to look for other than my usual fare of fantasy and sci-fi.

The outfit is pretty self-explanatory – white dress for the sheep and green cardigan for the green meadow. Plus it’s St. Patrick’s Day so of course I had to wear green. The scarf and tights are for warmth, mostly, though I like how the lace on the tights sort of echos the pattern on the scarf too.

After two quick “grab whatever’s clean” outfits earlier in the week, I felt compelled to put a bit more effort into my Friday look. Although I might have made things more difficult for myself because this exact outfit, with a grey cardigan instead of green, would be perfect for SIA next Monday. Oh well. I’ll figure something out.

Anyway, it’s starting to feel like the holiday around here. We don’t really have a big Christmas celebration, but our poinsettias are blooming, my mom has set up a little Christmas corner out in the hall, I’m going to a Christmas book sale tomorrow, and I’ve reread and rewatched Hogfather, so I’d say yeah, we’re definitely feeling the Christmas spirit.

When I first tried this outfit on, I wore the collar the right way (as a Peter Pan collar) with a brooch, and I had different shoes on. I looked like I just stepped out of a 1950’s children book’s illustration. Not a good look. I admit that I do like the twee style now and then, but I’m not comfortable wearing it – way too bubbly for my personality. So off went the brooch, the shoes got switched to boots and a belt was added. The result may look a little off-balanced, but at least I don’t feel like an overgrown 5-year-old (says the girl who still watches SpongeBob Squarepants.)

This has nothing to do with the outfit, but are any of you guys a Taylor Swift fan? I recently found out that on her latest album she has a duet with the lead singer of Snow Patrol (you’re probably sick of me talking about them too, but I’m sorry, I’ve been on a Snow Patrol high after going to their concert six months ago – man, has it really been six months? – and haven’t been able to come down since.) I quite like the song, but now there are all these Snow Patrol fans who got pissed because people are only going to know about Gary Lightbody as “the guy who did that song with Taylor Swift” or “the guy who wrote a song with that one kid from One Direction” (he just did that too.) If this was a couple of years ago, it would’ve bothered me as well, but now I have no problem with it. I wasn’t annoyed by those screaming fan girls at the Snow Patrol concert who were only there to watch Ed Sheeran, I just hoped enough of them had stayed to watch the show all the way through. I’m not even annoyed by people who only know Snow Patrol from Chasing Cars, though I would recommend they check out their other stuff too. And now amongst those Taylor Swift and One Direction fans, there will be at least a few who are intrigued enough to check out Snow Patrol and maybe become fans themselves.

I guess what I’m trying to say is that I understand having a favorite band as your “secret” and wanting them to remain that way (do you ever feel like that?) but as long as they don’t sell out and change their direction completely, I do want them to get more exposure.

Oh and, a word about the outfit: it seems I’ve been wearing yellow a lot lately. I used to really hate it, but now I’ve come to appreciate if not like it – depending on the shade, it goes with almost everything and can always brighten up an outfit.