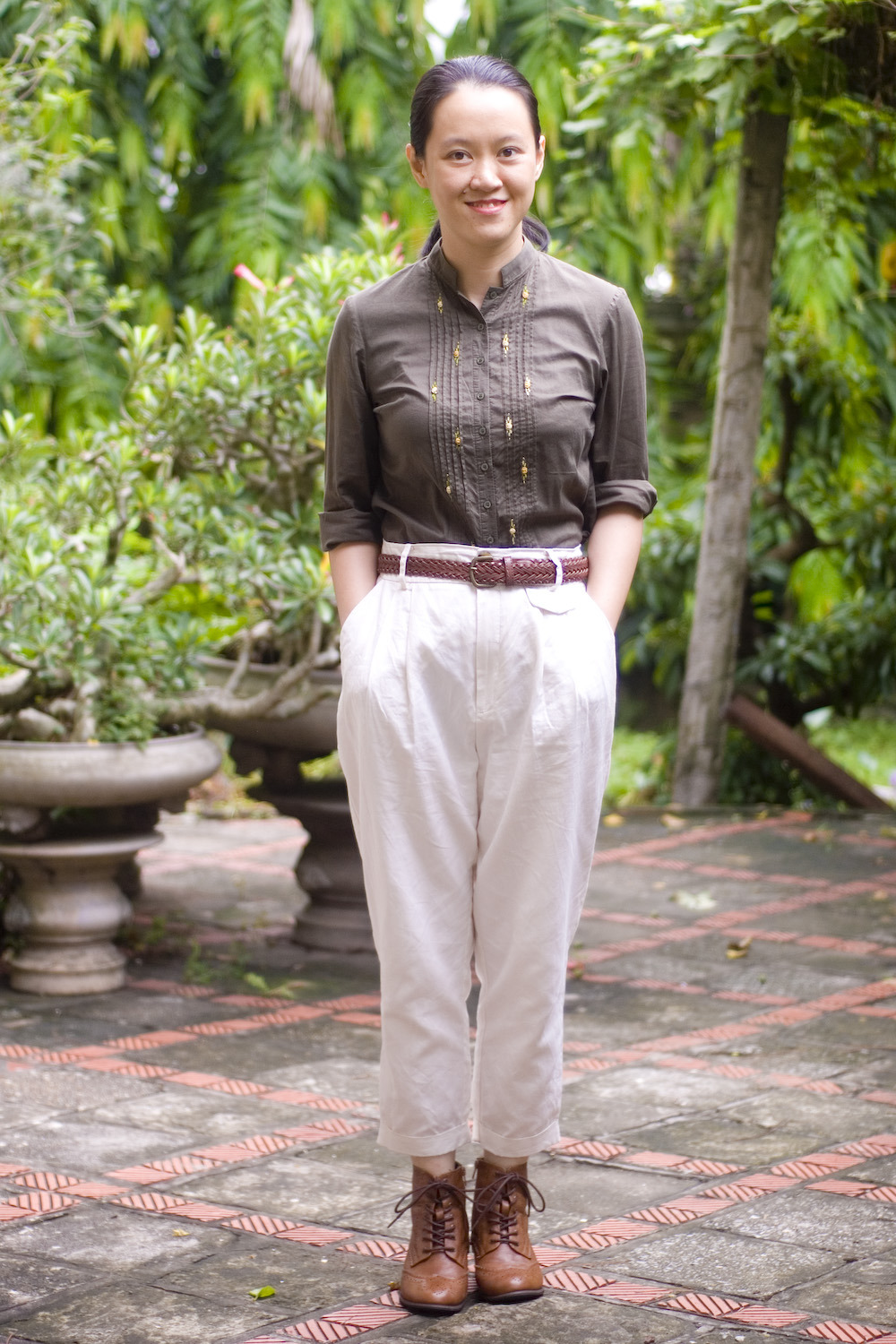 What’s this? Am I wearing… boots? That’s right. Although the rest of my outfit is still summery, the footwear is distinctly fall-like. The weather has cooled down enough now that oxfords and boots are replacing sandals and flats, and I’ve been itching to wear this pair ever since I’ve thrifted them, so as soon as it’s socially acceptable, I brought them out. I’ve wanted a pair of lace-up boots for a while, and these fit the bill perfectly. And apparently I wasn’t the only one who thought they were awesome – as I stopped at a red light, a lady pulled up next to me on her motorbikes and said “I love your shoes!” The light turned green and she roared off before I could say “Thank you, kind stranger,” but it definitely made my day. 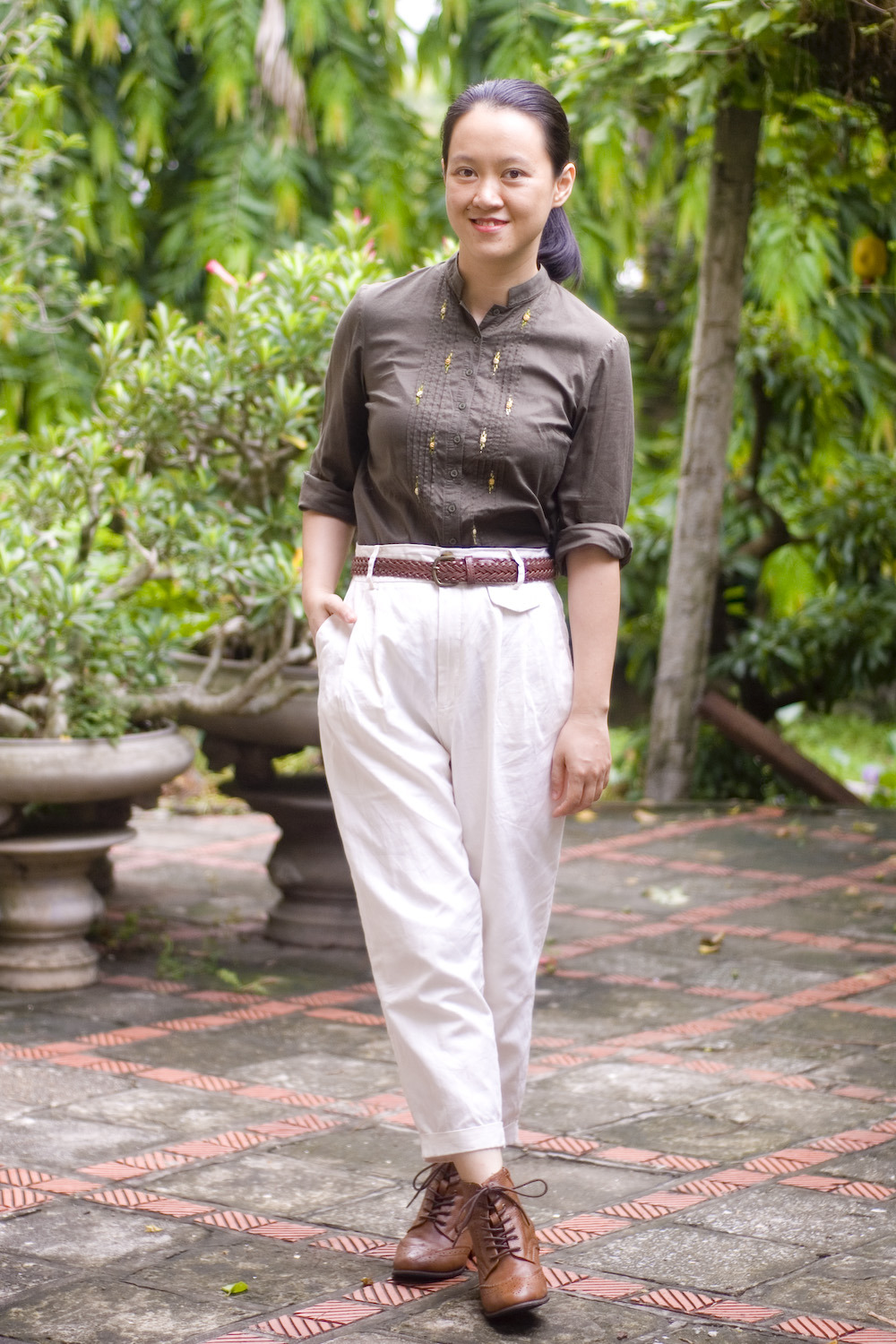 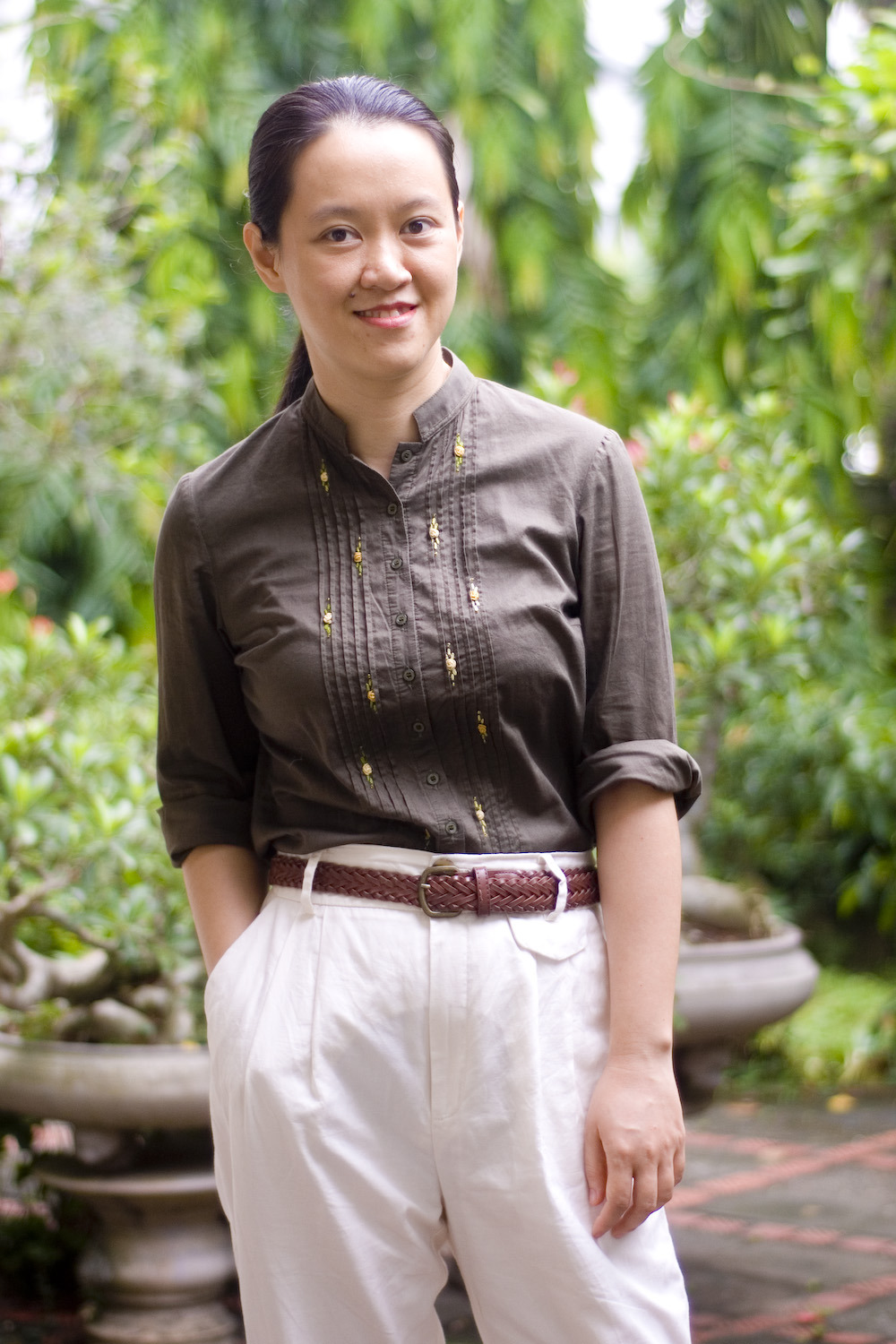 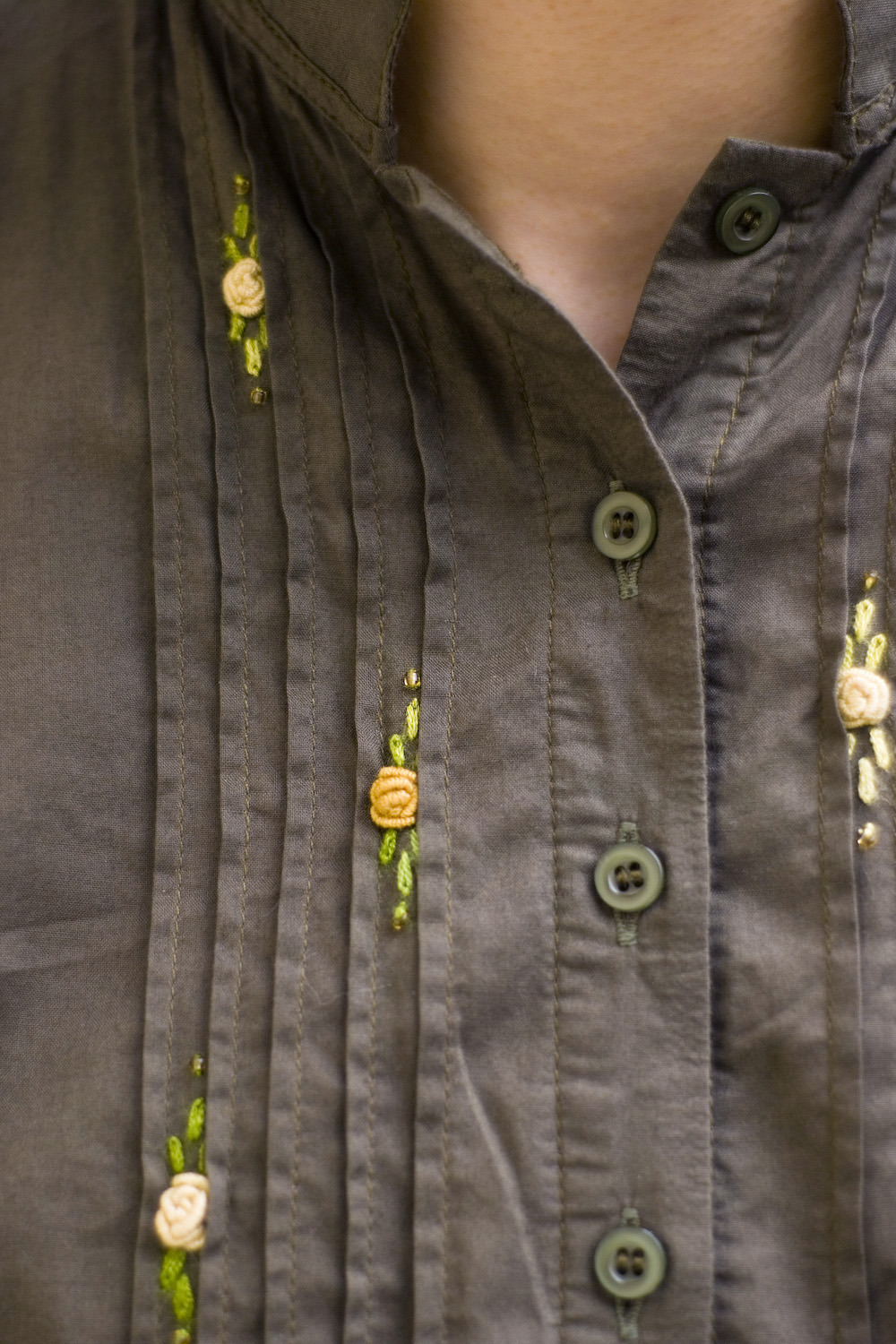 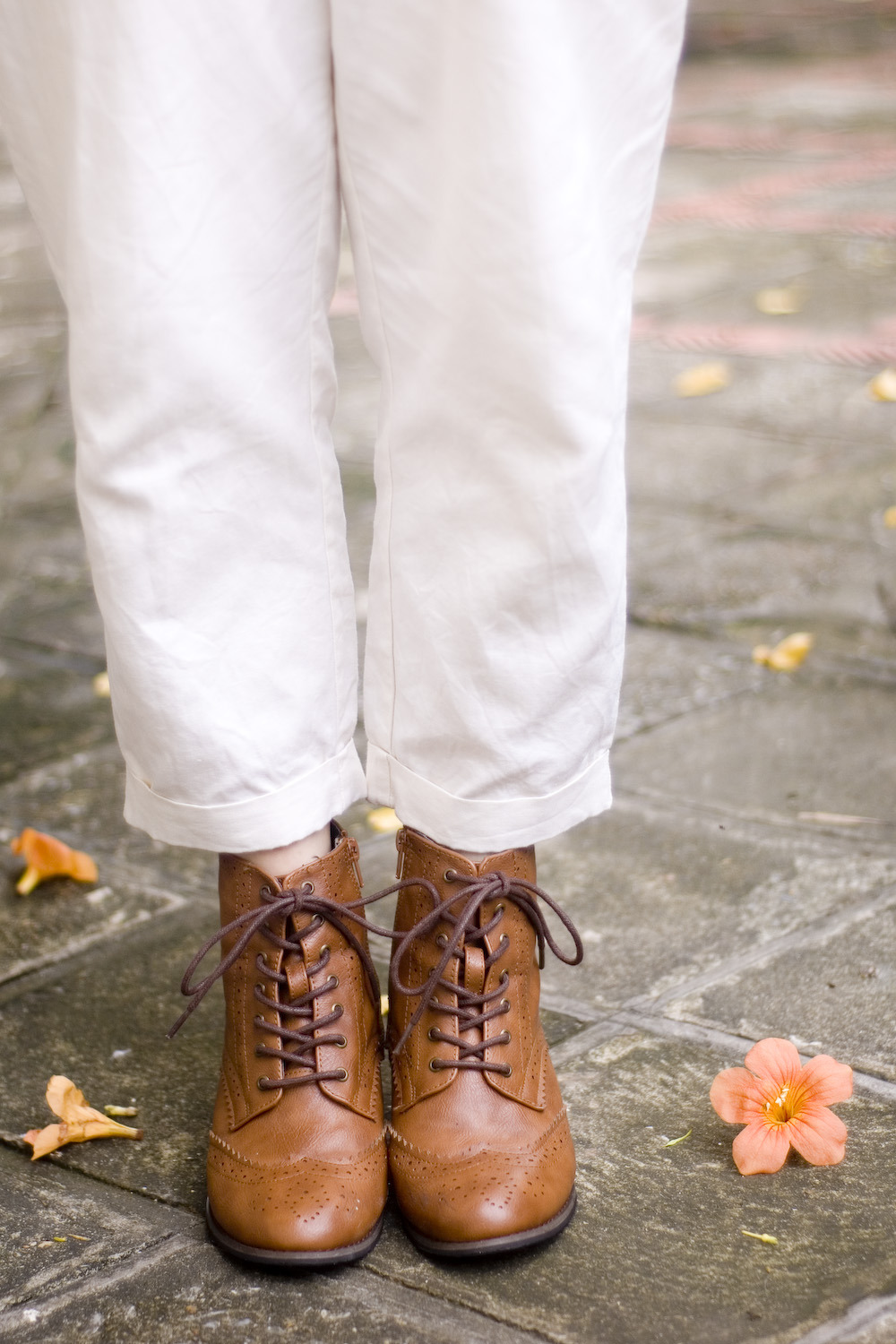 This book has been mentioned around the sci-fi & fantasy circle under the term “silkpunk“, which is how I was drawn to it in the first place. You know how steampunk is influenced by the Industrial Revolution? Well, silkpunk is influenced by the myths and technology found in East Asian antiquity, resulting in things like battle kites, airships made from silk and bamboo, and mechanical whales. Now that I had to check out.

Also, I grew up with all the classical Chinese novels, so I wanted to see how a modern author might draw inspirations from those. In fact, I would say “The Grace of Kings” is very much Romance of the Three Kingdoms meets Game of Thrones, and it features plenty of characters or even plot lines similar to Three Kingdoms. The main plot revolves around a rebellion against a tyrannical regime in a world reminiscent of the Warring States period of ancient China, specifically the two men at the head and heart of it – Kuni Garu, a street-smart commoner who rises to the top thanks to his wiles, and Mata Zyndu, the last remaining heir in a line of proud warriors who perished under the current emperor.

My verdict? I could’ve liked it a lot more. Like GoT, it deals with interesting themes like the cost of peace, the effect of power, and men’s moral ambiguity, and there are some kick-ass female characters – always a plus for me. But I cannot get pass the writing, which is super flat and rushed. Everything the characters think or feel is told to us; storylines are set up and resolved within the same chapter. The funny thing is, those classical Chinese novels use the same third person omnipresent voice and are similarly episodic, yet somehow I don’t have a problem with them. Maybe it’s the language. I read an English translation of Dream of the Red Chamber once and thought it dryer than dust. I guess English is just not suitable for this kind of storytelling.

3/5 stars. But I would still read the next book.

About the outfit inspired by the book, I pulled this top out of the deep dark corner of my closet because of the embroidered design, which is reminiscent of Chinese scrolls, and added my yellow flower brooch to represent the dandelion – after all, the series is called “Dandelion Dynasty”. The rest of the outfit I kept simple, mostly because I have no idea how else to style this top. I have paired with black almost every single time I wore it. Maybe that’s the reason it was shoved in the corner in the first place.

I’m typing this with six fingers (insert your own Princess Bride reference here) because I have quite stupidly scalded all but the thumb on my left hand. It’s not serious, but it also means there’s a bowl of water right next to the computer for me to dunk my hand in every few minutes. Given my clumsiness, that’s probably not a good place to put the water… so if  there’s no new post on Monday, you’ll know why 😀

Anyway, I gotta go catch up on Elementary. Have a good weekend!

Sorry for the late post, but I want to give everybody more time to send in their outfit photos for this week’s Style Imitating Art. Is it bad form to take a break from the 30×30 challenge when I’ve got just one outfit under my belt? Well, I have to, because today is my turn to host. The inspiration painting is Still Life with Asparagus by Adriaen Coorte:

I actually wore this outfit last week, on the one day it was cool, almost fall-like (of course, by the time I got around to taking photos, the sun was out again and I still sweated like a pig.) Like I said, I picked this specific painting because I have a shirt in that exact color. It proved to be a little difficult to photograph, because our garden is green everywhere as well, but I can’t complain about that 🙂

Let’s see what my fellow bloggers come up with, shall we? First up is Pao of Project Minima. I love how she always makes sure her photos match the inspiration painting:

Then it’s Rebekah of From the Mixed-up Files. Isn’t that an adorable dress?

And last but not least, our awesome guest-host, Vivienne of Thrifted Shift:

I’m so happy to see how much this little idea of ours has grown. And remember, if you want to host, or simply want to suggest a painting, shoot me and/or Jess an email! Thank you!

I’m not sure if this blouse qualifies me for the ABC’s of Style challenge, “S for Sheer”, or not, but it is the sheerest thing I have.

I remembered asking my mom when she sent the blouse to me, “What were you thinking?! When did I ever wear a blouse, and a sheer one at that?” That was back when I wore nothing but T-shirts and jeans. Seriously, a plaid button-up was my idea of non-casual. How things have changed, right? My mom must be so proud.