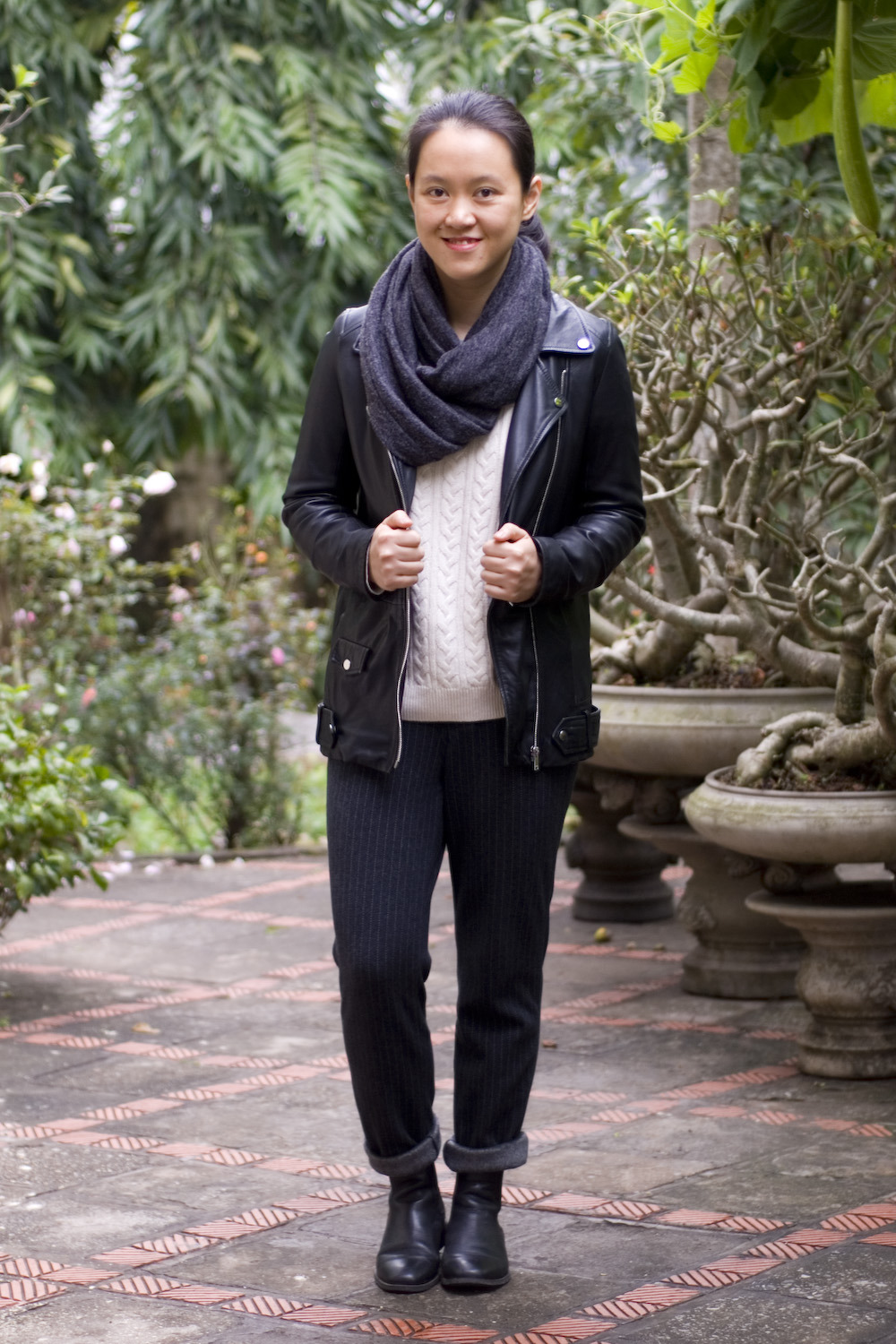 See what I said about wearing grey all the time? It’s been freezing around here, so when I saw these fleece-lined pants, I decided to snatch them up. They’re wonderfully warm, but styling them is another matter. This is my best attempt, and even then, it doesn’t look quite right. Something about the combination of these pants + beat-up boots makes me feel like a chimney sweep. I mean, if I switched my leather jacket for a tweed coat and my circle scarf for a neckerchief and added a newsboy cap, I wouldn’t look out of place in a production of “Oliver!”, would I? Does that make sense? Or have I listened to The Decemberists for too long? Does that make sense? 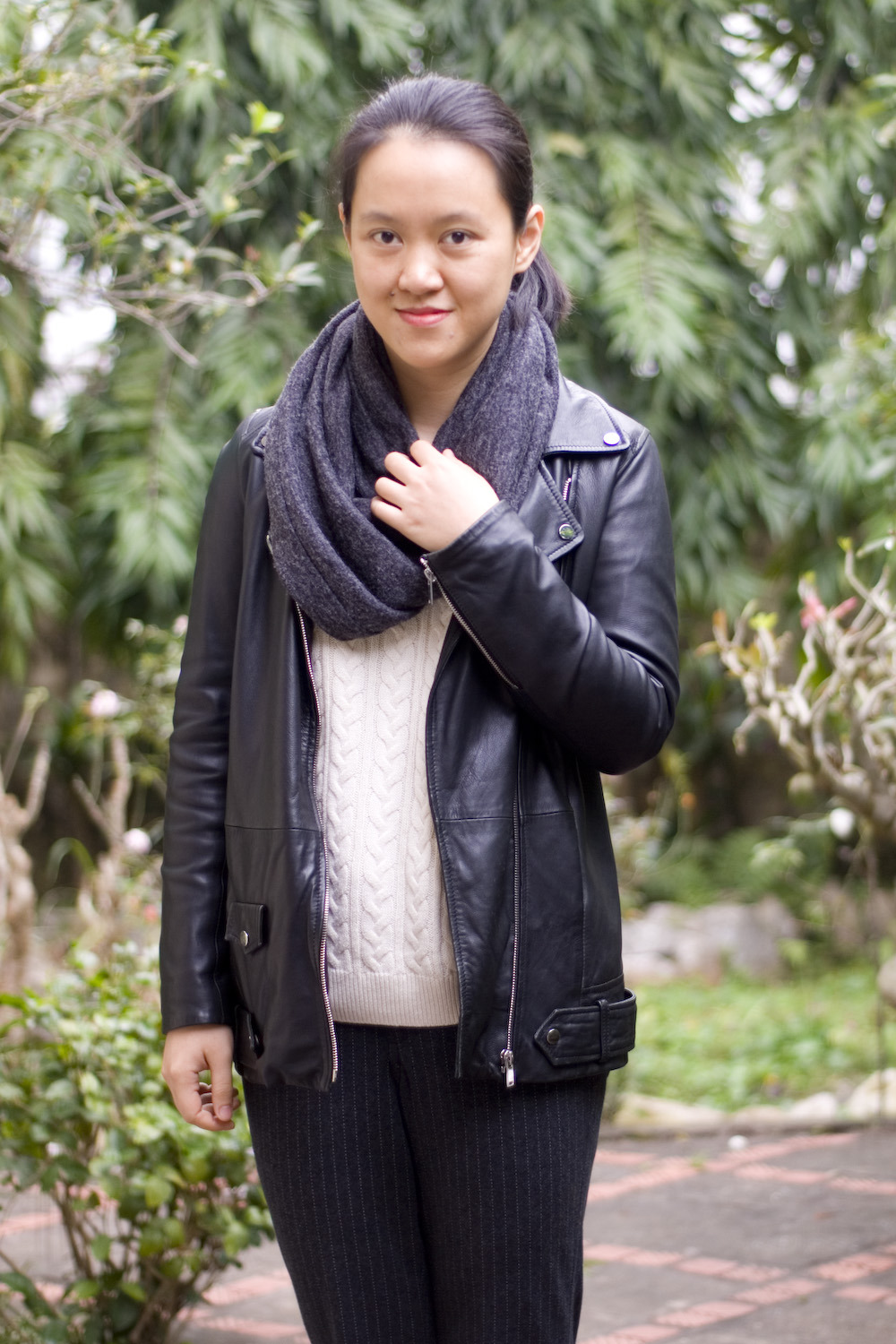 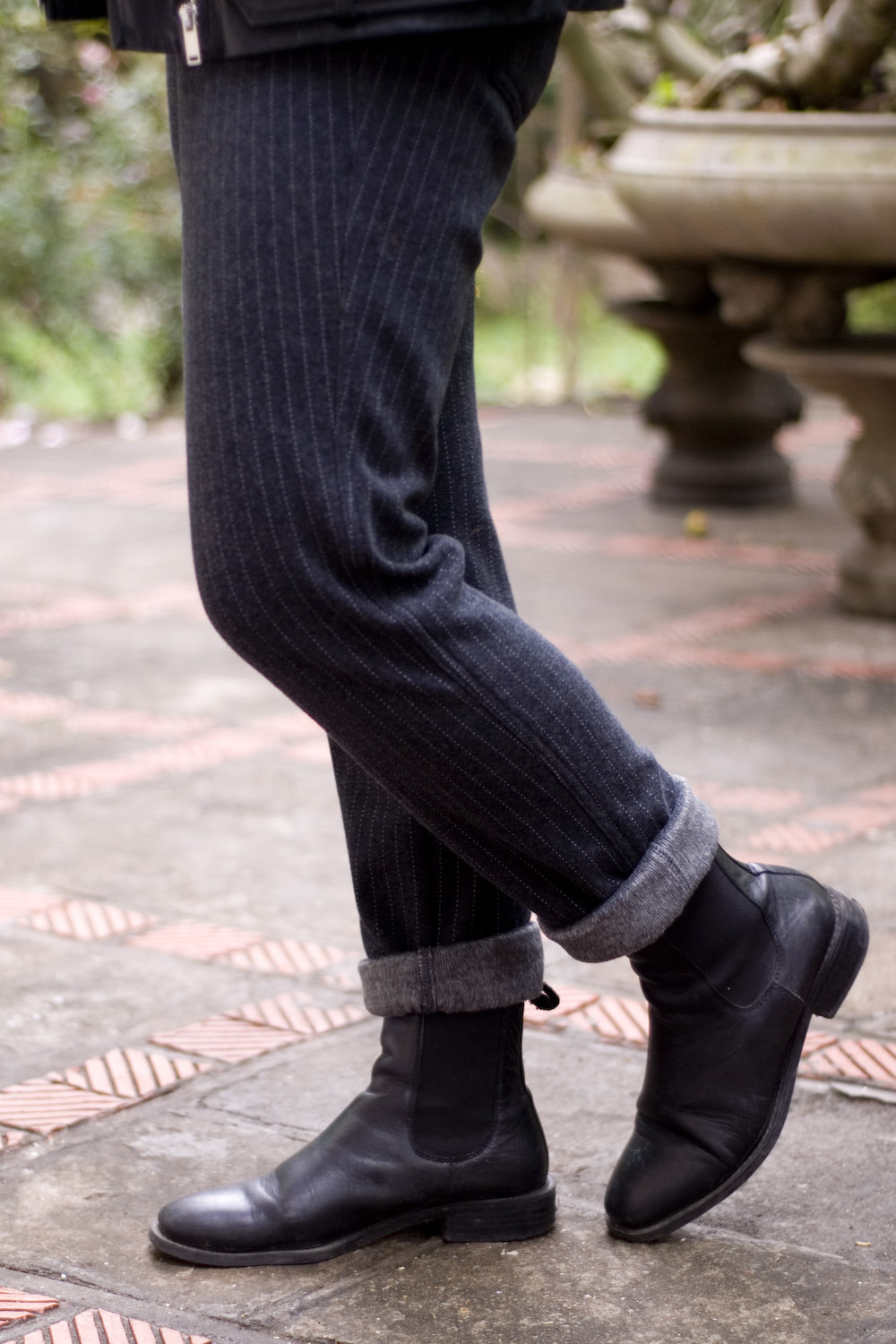 All About The Socks

I wasn’t feeling very sartorically creative these days, what with the busy schedule, the dreary weather, and an impromptu shopping ban (I wasn’t planning on having a shopping ban, I just haven’t gone shopping in so long), so here is a very basic outfit. I tried to jazz it up with a pair of colorful socks but I’m not sure it worked. My legs are too short to be broken up into three different sections like that. It looks a bit try-hard, doesn’t it?

If my smile seems particularly tight in these photos, that’s because it was freaking freezing and I had to keep my teeth from chattering. OK, that may be a slight exaggeration, but it is the coldest it has been since winter began. We’ve been having a lot of rain lately and the temperature has been steadily dropping, but for once you won’t hear me complaining because a) my winter break is about to start soon so I won’t have to brave the rain and wind anymore and b) according to old beliefs, if it’s cold and rainy around the Lunar New Year, it’s going to be a good year (as opposed to last year, when the Lunar New Year was dry and warm). So bring it on!

P/S: This outfit is a direct copy of Jessica Jones’ signature look. Last winter, I wore an outfit inspired by her, but now that I’ve got the leather jacket, the jeans, and the boots, I decided to just copy it. Can’t you tell I’m already looking forward to “The Defenders“?

Here’s the second look in my Marvel-themed week, inspired by Jessica Jones. The character has a very distinct and simple style – leather jacket, old jeans, and combat boots. I translated that into my own moto jacket, old jeans, and Chelsea boots. In the earlier episodes she also wears a scarf, which I added here. Of course I had to add my own touch (the brooch) but that’s why these outfits are only “inspired by” and not costume.

As for the show, like I said, it’s awesome. It is as tense as Daredevil (another Marvel’s Netflix show), though in a different way – Daredevil has this sense of impending doom about it, and you’re on the edge of your seat waiting for it to explode, whereas with Jessica Jones, it is more like a sense of desperation. The characters are so damaged and the odds against them are so huge that you don’t think they can succeed, but you want them to succeed so badly. Also, it is one of the most (if not the most) accurate depictions of an abusive relationship and its ripple effect that I’ve ever seen. Just… go watch it, OK?

Apparently yesterday marked my 1000th post on the blog! Which makes this post #1001.That’s pretty cool, if I do say so myself. When I started this blog, I saw it as nothing else but a hobby. It still is, but I honestly didn’t expect I would keep doing it for so long.

But I’ll save all that retrospect for the blog’s anniversary. For now, here’s the last outfit of this week’s capsule, a simple winter white look. While I was uploading the photos, I thought that the white pants + black boots combo looked kinda familiar. Then I realize: take away the scarf, and this outfit is just a bowler hat and a pair of suspenders away from being a A Clockwork Orange costume. Oh and a codpiece too, but I’m not sure I can rock that.

Anyway, here are this week’s looks. I think keeping the pieces in a neutral color scheme with just one or two pops of color is definitely working out for me: