I Scream, You Scream, We All Scream 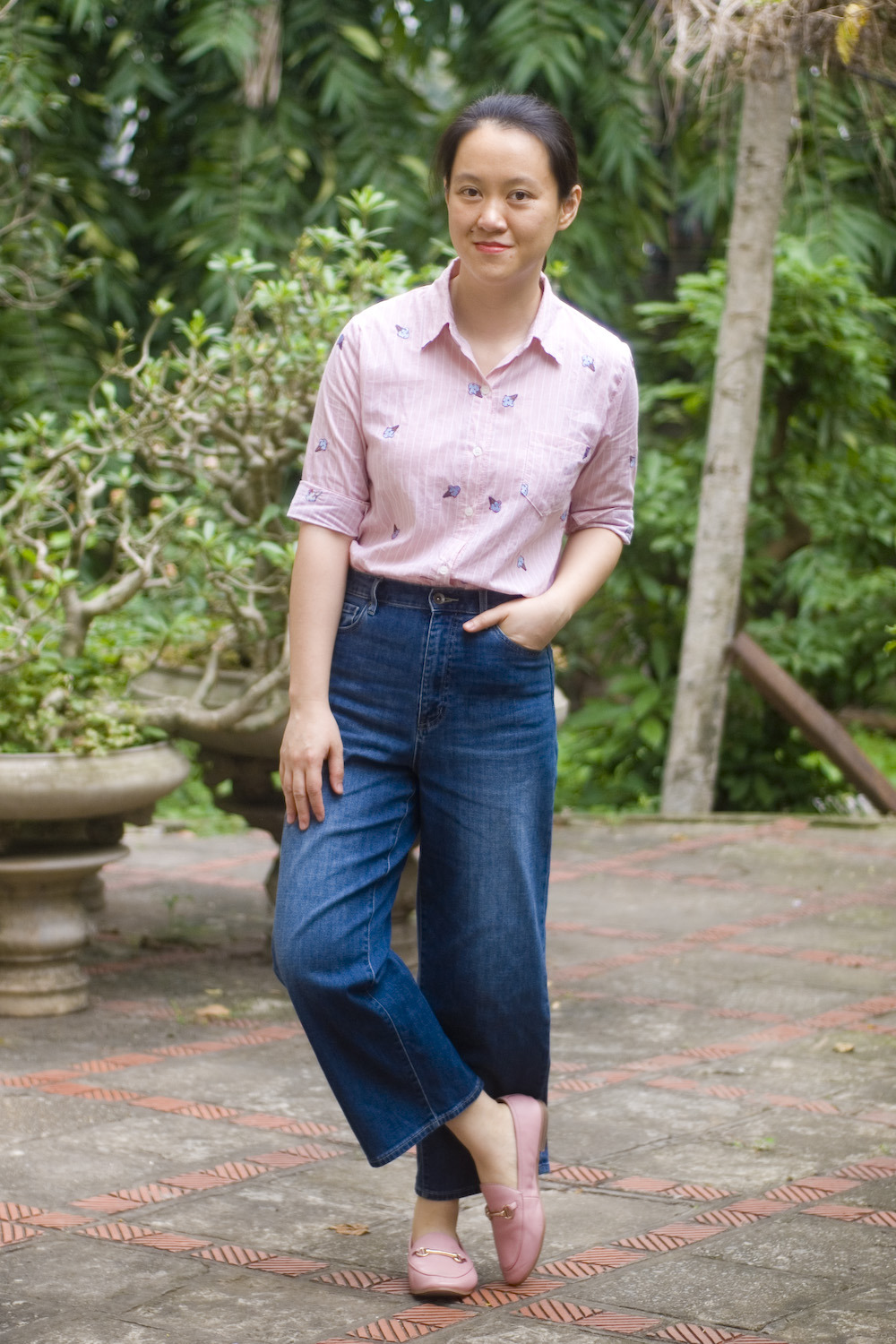 Here’s my outfit for this week’s SIA, inspired by Georgia O’Keeffe’s “Sky above Clouds IV“. The bright colors stump me a bit, but luckily, we had a warm day, so I was able to bring out this ice cream shirt. The pink stripes and the ice cream cone embroideries mimic the graphic quality and the colors of the painting quite well, I think. The shirt is the real star here, so I paired it simply with jeans and my pink loafers for maximum pink-and-blue action. (And yes, I know the above phrase is supposed to end with “for ice cream”, but it’s a bit cheesy, isn’t it, when I’m literally wearing an ice cream shirt?)

Don’t forget to drop by Daenel’s blog on Wednesday to see other outfits inspired by this painting! 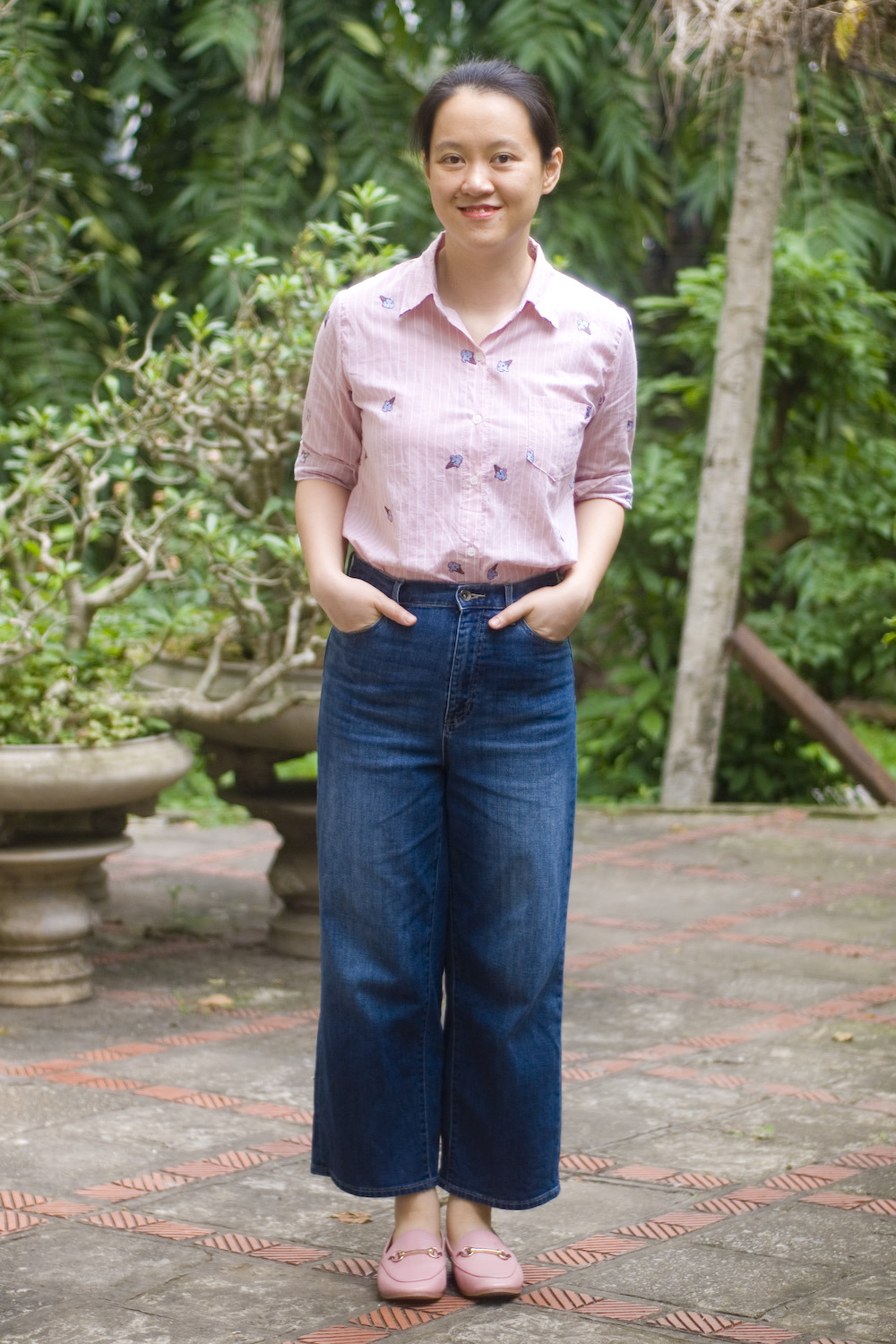 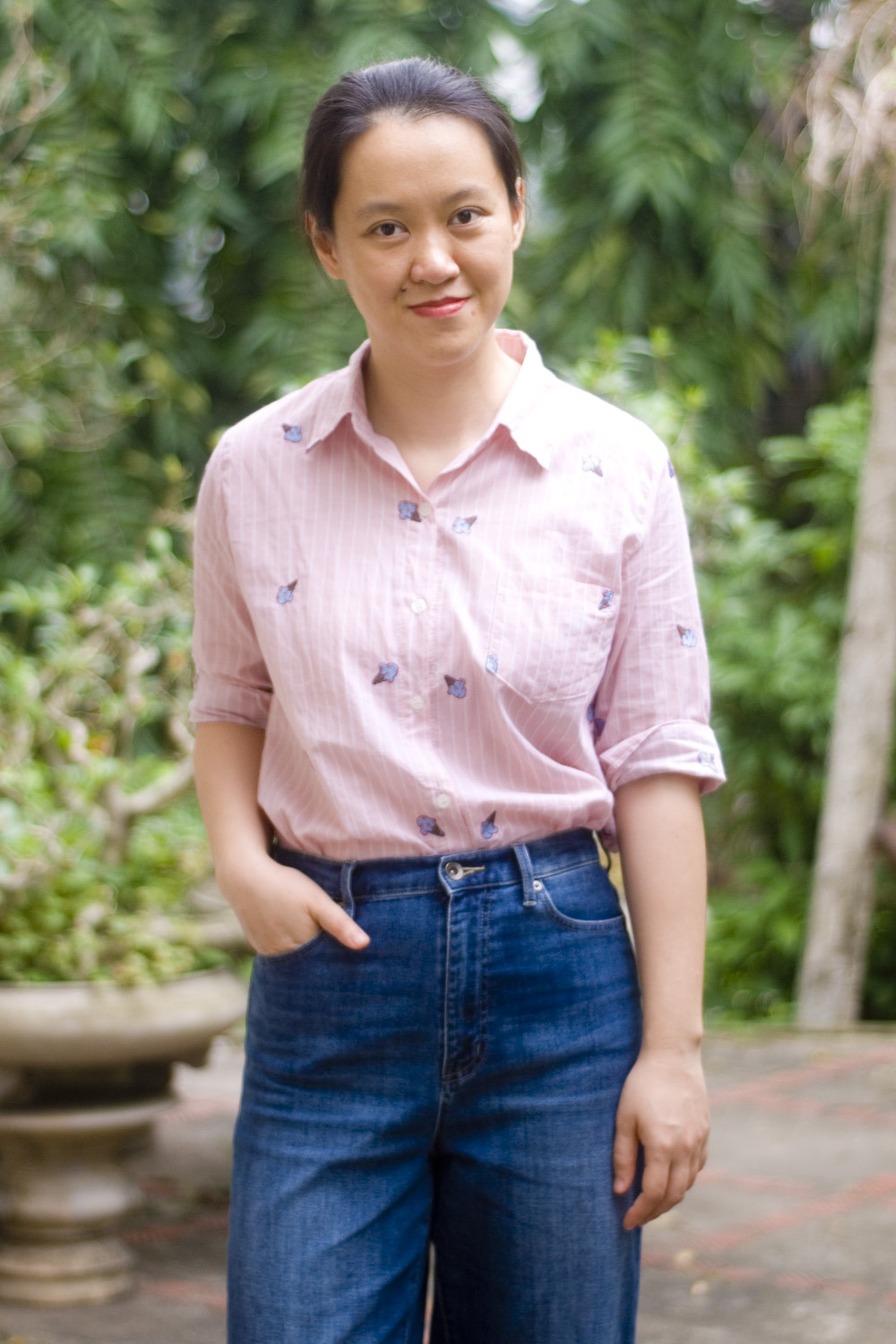 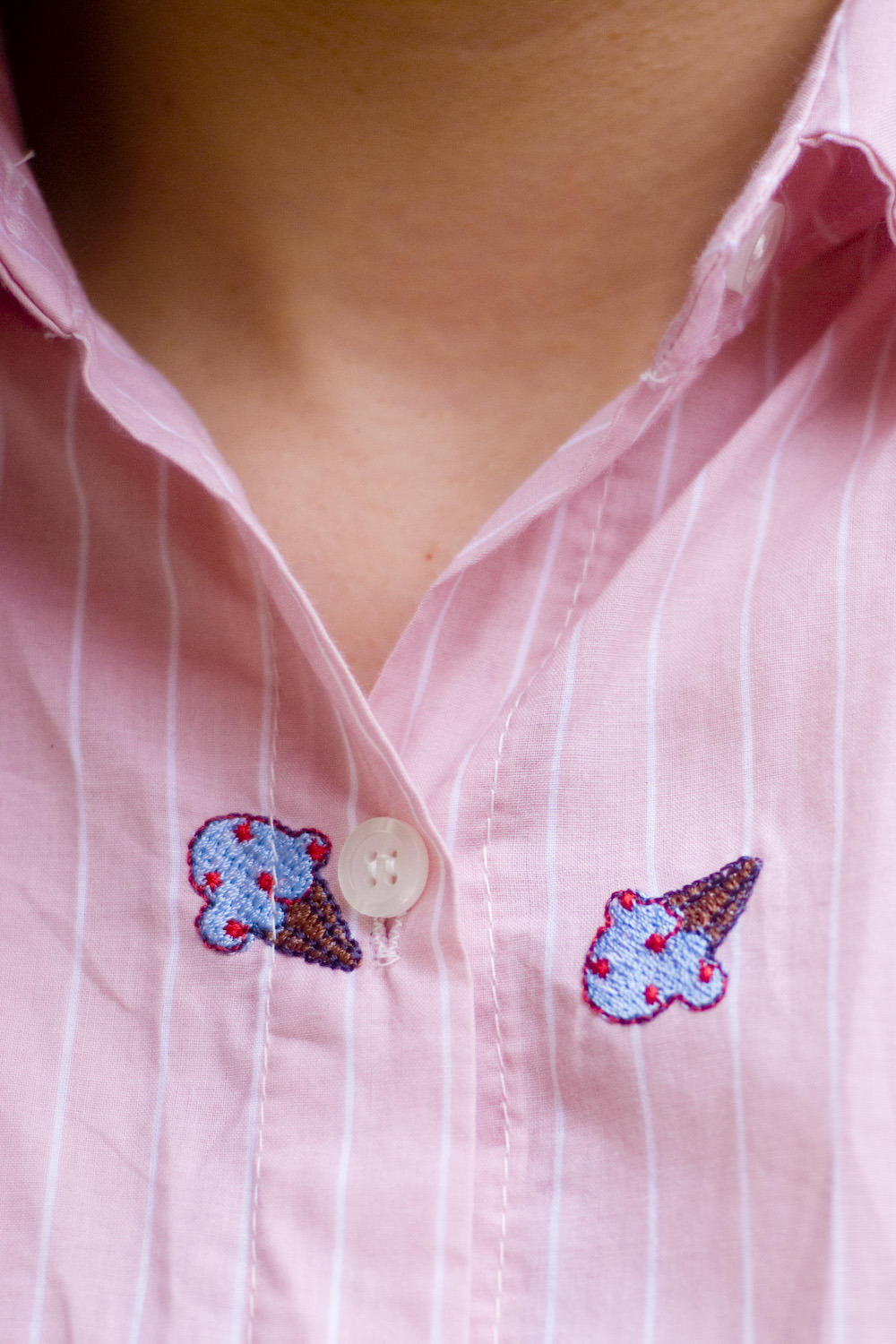 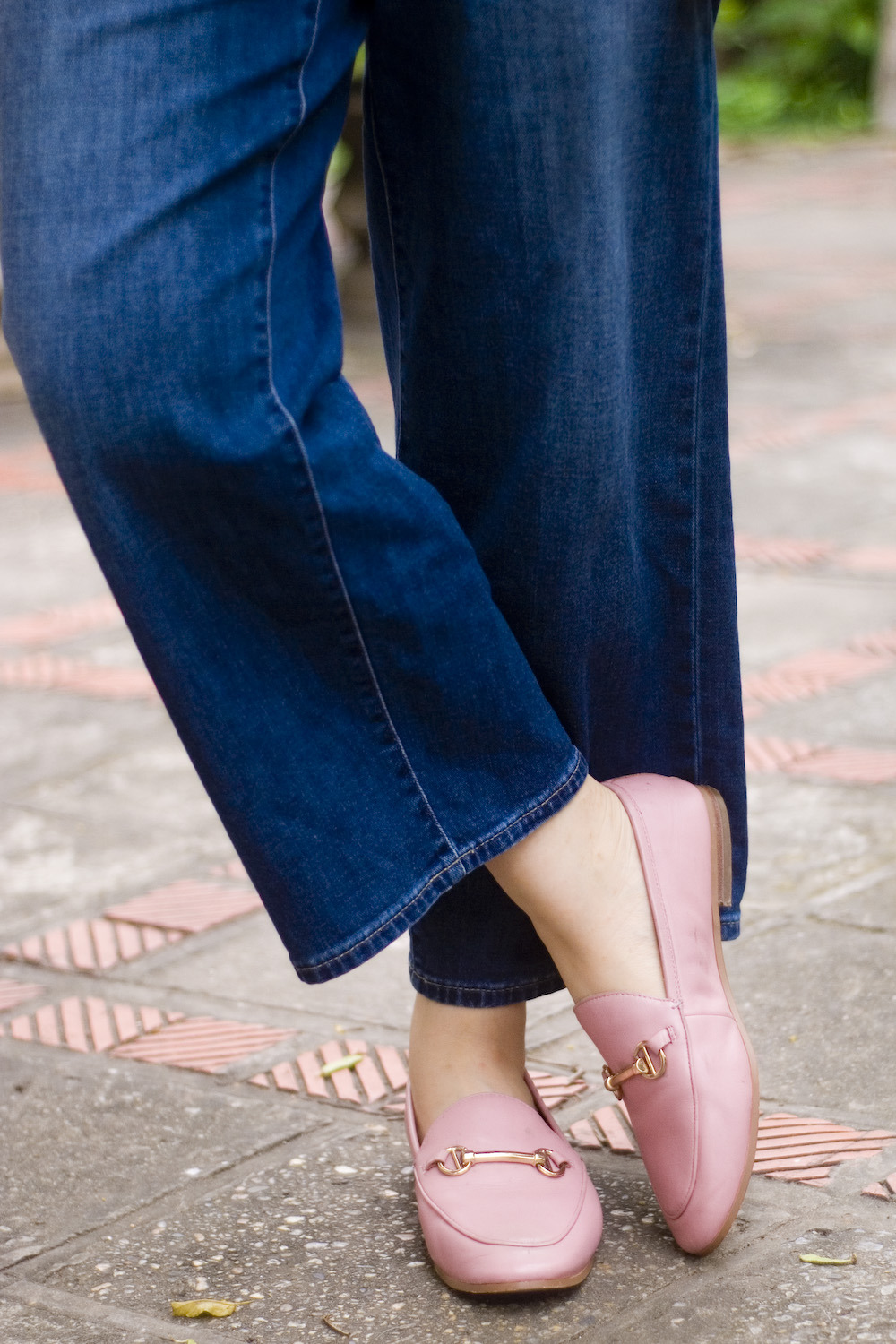 Where Did Time Go?

Oops, sorry for the tardy post. I kept reminding myself to write up the post when I had time and scheduled it, but I never had time, and before I knew it, it was already Wednesday and past the time my posts usually go live. Usually I would write all the posts  during the weekend and just schedule them for the week, but as I said, work has been so busy lately that my weekends were spent catching up on other works and errands I didn’t do during the week, and blogging is never very high on my to-do list.

Oh well. Next week I’m going wrap up all the end-of-semester work and head into the new semester, so things should calm down by then. In the meantime, here’s something a bit different because I don’t want it to look like I wear that brown tweed blazer all the time. I occasionally wear my other tweed blazer too.

When You Reach Me

Here’s my outfit inspired by Rebecca Stead’s When You Reach Me. It’s definitely the best out of the three books I read last month, and also the easiest to translate into an outfit as well. The story takes place in the winter of 1978, so I chose my wide-leg jeans and striped turtleneck to mimic a 1970’s style. Then I topped it off with my herringbone jacket and this ceramic brooch, because… the pattern looks kind of mysterious and time-travel-y? I don’t know, I just like it. (And shut up, “time-travel-y” is totally a word.)

It’s always the case – the last look of a weekly capsule is the least interesting of the bunch, because by that time I’ve run out of ideas to put together a blog-worthy outfit, so I just grab whatever I haven’t paired together yet and called it a day. And today I have another excuse of being sick (sore throat + a touch of upset stomach, not a great combination).

Anyway, here are all the looks for this week:

That also concludes my first month of weekly capsules, and I think I did OK. A quick recount shows I got 18 outfits out of 26 pieces, which isn’t too bad considering all the layering, but I’m wondering how well this idea will pan out in the warmer months, when you can’t re-wear certain pieces like shirts and dresses because of sweat. I guess we’ll find out.

My first book review of the year, and it’s one that’s right up my alley – “Indexing” by Seanan McGuire. Part fairytale retelling, part police procedural, it is set in a world where fairy tales can become real and often kill people along the way. A black-haired, pale-skinned person can be in a lot of danger from eating apples, a talented flutist can become the Pied Piper, and a girl falling into a coma can cause those around her to fall asleep as well. It tells the story of Henrietta “Henry” Marchen, an agent of the ATI (Aarne-Thompson Index, the fictional index of fairy tales) Management Bureau, who specializes in preventing fairy tales from becoming reality. While saving the lives of innocent people swept up in the narrative, Henry and her fellow agents also have to fight against their own stories and avoid becoming fairytale characters themselves.

An urban fantasy dealing with fairy tales? I was sold. Partly because I once wrote a TV pilot dealing with the same subject (though my story is more similar to Buffy the Vampire Slayer, just replace vampires with fairy tale characters), and partly because this reminds me of the Thursday Next series, another favorite of mine. However, I was a bit disappointed with “Indexing”. The beginning is kind of slow and repetitive (I later learned that it was first released in episodes on Kindle Serial, which explains the repetition, but doesn’t make it any better), it does pick up once the main villain is introduced, but it becomes episodic and slow again at the end, and the ending just sort of happens. I was expecting something more climactic.

Also, I don’t think Henry is that engaging as the main character – she is a Snow White, and the book does a good job of showing her struggle against the princess archetype, but she is sometimes outshone by her team member, Sloane, who is supposed to be a Wicked Sister/Evil Queen. It’s more fun to read about someone trying not to be evil because some narrative force wants them to be, rather than someone trying to avoid eating apples and falling into a coma.

Still, it’s a clever take on the genre, and there are some interesting twists on the familiar characters – a male Little Mermaid and a transgendered Rose Red, for example – so it’s definitely worth checking out, if you’re a fan of this type of stories.

As for my outfit, it is based on Henry’s off-duty look – “gray stonewashed jeans and a dark blue cotton shirt that had been white when I brought it home” (because she’s a Snow White, so the narrative turns her clothes blue, you see). I don’t have gray jeans, so this is the best I could do to recreate that. And of course, I had to add my “poisoned apple” brooch too.