Portrait Of The Artist As A Young Woman

(Sorry for the pretentious title. I couldn’t help it!)

This week’s SIA inspiration, a portrait by South African artist Juanita Mulder, is a challenge for me, because it contains mostly bright, primary colors – red, blue, yellow, with quite a bit of black and white – which I haven’t worn in a while (except for the black and white, of course.) But I’ve never let that stop me before. Either I would find something else in the painting to inspire me, or I would find a way to sell my outfit even if it is only marginally connected to the inspiration at best.

In the end, I went with the bold, graphic quality of the painting (which means lots of stripes) and recreated the colors in darker, more subdued shades – maroon instead of red, navy instead of blue, and brown instead of yellow. At the last minute, I also threw on my leather jacket. The painting doesn’t feature a lot of black, but a leather jacket seems right somehow, because the woman looks so defiant, and to me, that means a leather jacket. I believe the spirit of the painting is there in my outfit, even though it’s not an exact replica (told you I would sell it :P)

Don’t forget to swing by Jen’s blog for the full round-up of other looks inspired by this portrait. 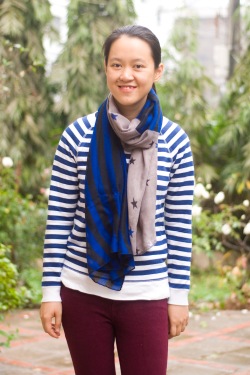 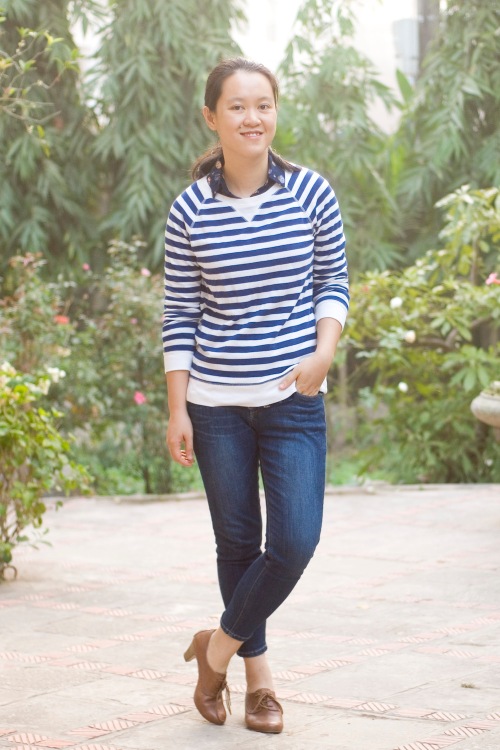 It has been unseasonably warm all through December, so I haven’t worn a lot of layers lately. Most days I would just throw on a sweatshirt and a light jacket on top of that, which I take off as soon as I get to work, so it doesn’t count as layering. Maybe that’s why my layering skill has gone a bit rusty – like in this outfit. I was trying for some subtle pattern mixing, but the neckline of the sweatshirt doesn’t work with the button-up shirt at all, so the two pieces look like they have nothing to do with each other. Well, I guess it’s back to the drawing-board with this one… 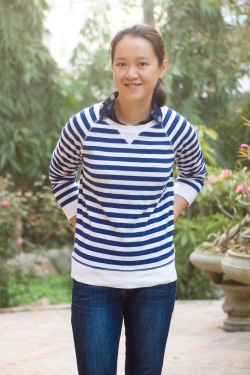 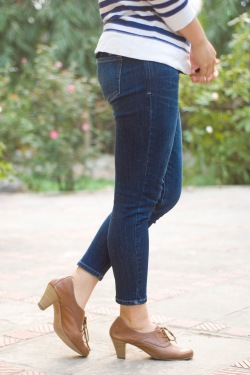 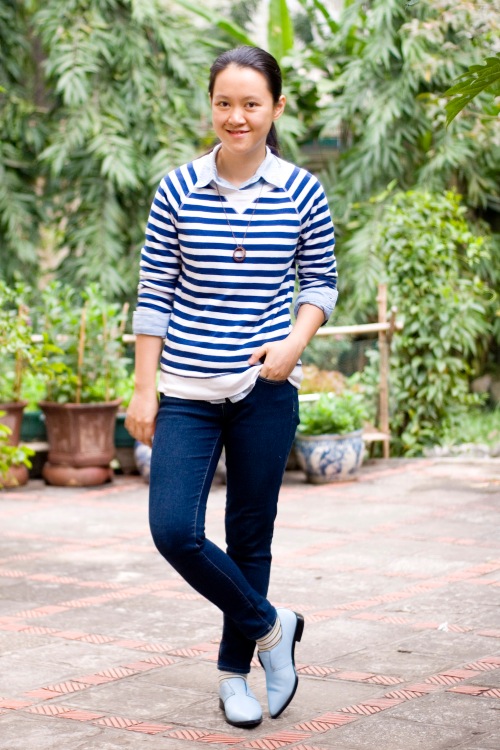 When I saw this week’s SIA inspiration, “Sunrise” by Georgia O’Keeffe, I knew it was going to be a tough one because it’s mostly pink and red, and I don’t have much of either in my wardrobe. So I decided to take the monochromatic look of the painting and adapt it to my wardrobe, which means lots and lots of blue. I took it one step further and echoed the curves in the painting in my striped sweatshirt and socks (I should get some more fun socks!), and in my necklace as well. I even Photoshop the hue of the painting from pink to blue to see how accurate my outfit is – and as you can see, I’m not far off. And that’s the fun of SIA – you can interpret a painting any way you want.

Remember to check Jen’s blog tomorrow for other outfits inspired by this painting! 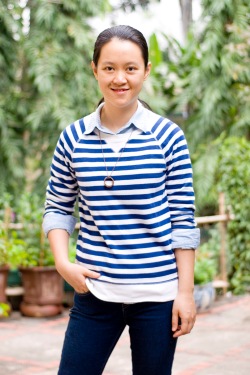 I actually wore this last Sunday to my usual workshop class. It’s not exactly blog-worthy, but it’s comfy and functional, and perfect for a casual class.

Having taught these workshops for a while now, I’ve started to see that the students all fit into these five types:

– The casual movie fan who has no idea what he’s doing;

– The film buff who thinks he knows everything;

– The copywriter/ad/marketing exec who just wants to be a producer;

– The weird kid who actually has some good ideas;

– And finally, that one guy way over there who wants to be a Director of Photography (and since cinematography was my weakest class in film school: sorry, bud.)

I have yet to see anyone that strays out of these. So either these classes attract very specific types, or I’m the insane type who insists on seeing patterns in everything 😛 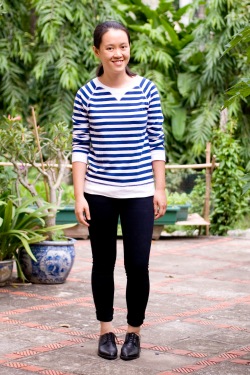 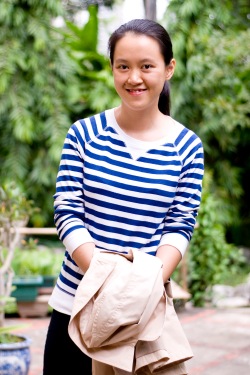 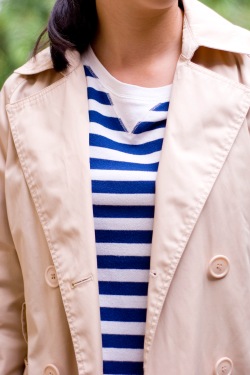 You can tell I’m scraping the bottom of the barrel because this is the kind of clumsy outfit that I came up with toward the end of the capsule. I mean, I like the idea – striped sweater, skirt, boots, scarf – that sounds all right, doesn’t it? Except this sweatshirt doesn’t really go well with being tucked into a skirt, and for this skirt + boots combo to work, my skirt should be an A-line, not pleated, and my boots could do with a bit more of a heel too. Oh well. At least now I know what doesn’t work. 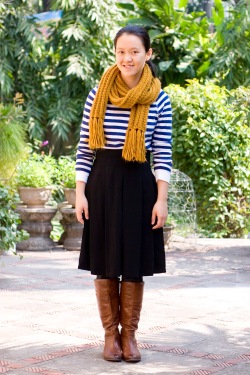 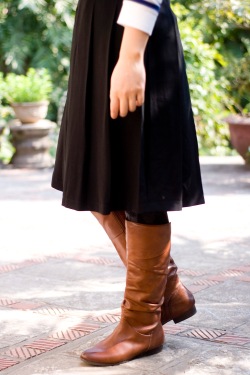 Yes, yes, another replacement, I know. But after taking out my navy cable knit sweater last week, I’ve noticed how worn it is, all pilling and gross, so I replaced it with this sweatshirt. And when I say “replaced”, I didn’t just mean in my capsule wardrobe, I mean in my closet as well. I demoted the cable knit sweater to the rank of “around the house” clothes, which includes stuff I wear when I’m at home and maybe to run a quick errand. Sweats, if you will.

I’m slowly refining my closet now, separating it into things that I would wear now, and things that still fit and are wearable but not I don’t like enough to be worn to work or to go out. Because that’s my goal behind the capsule wardrobes – hopefully, after doing a few of them for all seasons, I can figure out a solid, cohesive “work clothes” closet that doesn’t make me go “I don’t know what to wear!” every morning.