I’m still sorting through my Cuba photos (1500+ of them!!!) so the travel posts will have to wait. In the meanwhile, here is a straggler of an outfit post. This was from back in early February, I think? I didn’t even remember which sweater I was wearing underneath the coat. But it was definitely during one of our worst cold snaps. The weather is warming up fast now and bundled-up outfits like this are definitely a thing of the past. All of these items have been put away for next winter. Still, you guys know me. I’d take that kind of cold over summer heat any time, so I’m still trying to hold on to winter for as long as I could.

A Forgotten Outfit & A Blog Notice

I was cleaning out my camera’s memory card the other day when I discovered a set of outfit photos from last December that I had completely forgotten about. And it’s not a bad outfit either (if I do say so myself). Good thing I found it, because I was running out of content to post.

Which brings me to the notice: my Lunar New Year starts from next week. It’s going to be a 3-week break, and after that, I’m going on a 3-week business trip (I’ll post more on that later). That means that for the next month and a half, posting is going to be sporadic around here. I will try to post when I can, and regular features like SIA and book reviews are still going to be up. So don’t worry, the blog won’t be dead, just a little quieter than usual.

I received Jen’s inspiration for this week’s SIA, Briton Rivière‘s “Una and the Lion”, while I was in Iceland, which gave me the idea of finding some sheep to use as the background for my outfit photos. Sheep and horses are what you see the most while driving in Iceland, and it would be perfect since the painting also features a lamb (and the lion would be myself – I’m a Leo after all.) 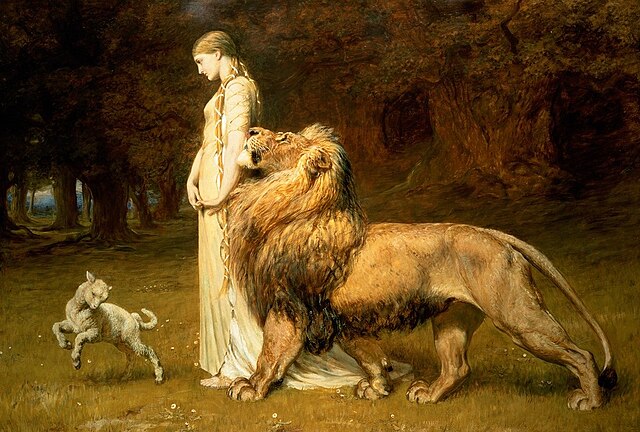 However, seeing the sheep and taking photos with the sheep are two different things. The sheep may be used to cars zipping past them, but they’re definitely not used to a car stopping with three girls wielding cameras running towards them and posing, because as soon as they saw us, they took off. So in the end this is the best that I got – you can kinda see the sheep in the distance. They’re there, I swear!

Here’s me, chasing the sheep

Here’s the sheep, running away

As for the outfit, it’s my uniform in Iceland – cable-knit sweater, black jeans, black boots, and a big blanket scarf. The colors mimic the painting quite well, don’t they?

I’m on my way back to Vietnam tomorrow, to there will be more Iceland posts to come. In the meantime, don’t forget to check Jen’s blog for more outfits inspired by this gorgeous painting!