The Curse Is Broken

Last week, I lamented the loss of my “rain shirt” and the fact that it might not rain for as long as the shirt stayed missing. Well, guess what? A couple of days later I found the shirt (or, rather, my mom found it in her closet), and it immediately started raining! The rain shirt worked its magic again!

The only problem is that it rained really hard for the entire week, to be followed by a week of scorching sun, so there won’t be a lot of outfit post next week. It’s not just because the weather kept me from taking photos outside, but it also seriously affected my ability to put together cute outfits. Most of the time I just tried to stay dry and clean (last week) or cool (this week) as much as possible – take this outfit, for example: stretchy pants that can be rolled up to avoid puddles, shoes that can be wiped clean easily, and a perfunctory top. That’s the best I can muster. Pretty much the only part of the outfit I put some thought into is the necklace – with droplet-shaped pendant to match the weather (theme dressing is what I’m best at.)

School doesn’t officially start until next week, but I’ve already been teaching for two weeks now at an amateur film making workshop. Since the students are of all ages (the oldest I’ve had is middle-aged, the youngest is 15) and the atmosphere is much more relaxed than a usual class with college-aged students, I tend to dress much more casually than I normally do – like this, for example. And yet, despite that, I’ve never been mistaken for a student like I have at school. Weird, right?

Also, I’m very proud that this week I managed to mix and match just 6 items. I know I’ve promised not to pay too much attention to the numbers anymore, but I’d like to keep the number of items in a weekly capsule under 8 if I can. Anyway, here are my looks this week:

Weekly Capsule 32.3: The End Of A Decade

My birthday was last week. I’ve never been big on birthday parties (I didn’t celebrate my birthday at all during all those years I lived in LA), but since my niece loves them and my sister’s birthday and mine are so close together, we just made a cake and had a small family party on the weekend. It’s weird though, thinking that I’m 29 years old. I still feel the same as I did when I was 17. But then again, nobody knows how being 29 is supposed to feel either, right? Adulthood is a huge lie, I’m telling you 😛

A funny coincidence: I wore a very similar outfit exactly a year ago. Except this time my shirt is long-sleeved and my shoes are snakeskin, not leopard. I did think of that outfit when putting this together, but I had no idea that the timing aligned as well!

And the scarf is still the perfect make-shift hoodie.

Today’s outfit is super simple and doesn’t inspire any interesting writing, so I’m going to talk about something else. The other day, I just read on a style forum some comments criticizing a blogger for not having a pedicure. A pedicure, I tell you! To be fair, other commenters are quick to defend the blogger – the consensus is that the nails only need to be clean and healthy. But it got me thinking. Is that what you have to do to be presentable now? I’m not just talking about style bloggers; I mean everyday people too. Does every woman have to primp herself up from literal tips to toes before she can show herself lest the world recoils at her unpainted nails and bare face? Because I don’t. I’ve never even painted my nails. I don’t wear make-up, save for the occasional swipe of tinted lip balm. My hair takes less than thirty seconds to “style”. I’m not a slob, but I’m very much of the opinion that as long as your appearance is clean and tidy, you don’t need anything else.

This is not a dig at anyone who likes to put a lot of efforts into their appearances, you understand. I’m just kind of baffled that someone would expect such efforts from other people (or, more exactly, other women. Men don’t have to deal with that shit, do they?)

For this week’s SIA, inspired by Jack Vettriano’s “The Singing Butler“, I put together something really simple. If it wasn’t the summer break, I would probably do something more office-appropriate, as something about the crisp color schemes of black, gray, and red just reminds me of office wear. But since I’m strictly working from home these days, tee, pants and sneakers it is. At least my sneakers are a perfect match to the ground in the painting. And thank God the weather is cooling down (monsoon season is finally here, hooray!) so I was able to add the red scarf as a pop of color.

Come to think of it, I should’ve added an umbrella too, but it wasn’t raining when I took these photos so I thought it would be pretentious.

Remember to check Jess’ blog for other interpretations of this painting. 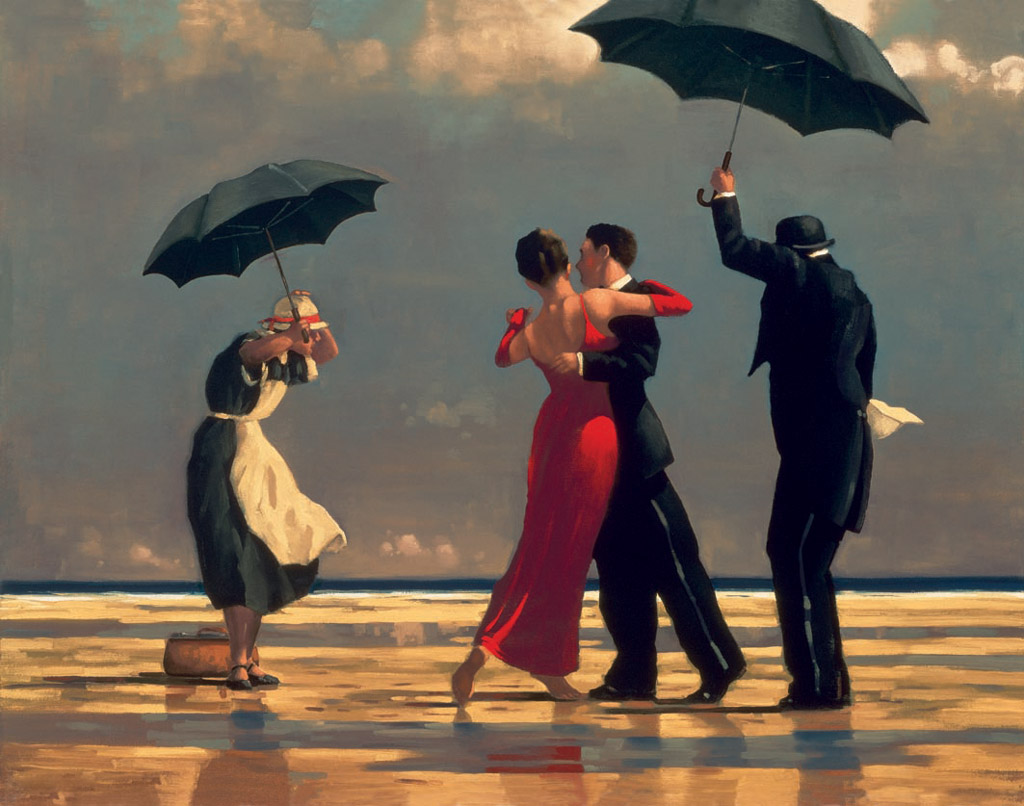