Another month, another eclectic assortment of books. Let’s go! 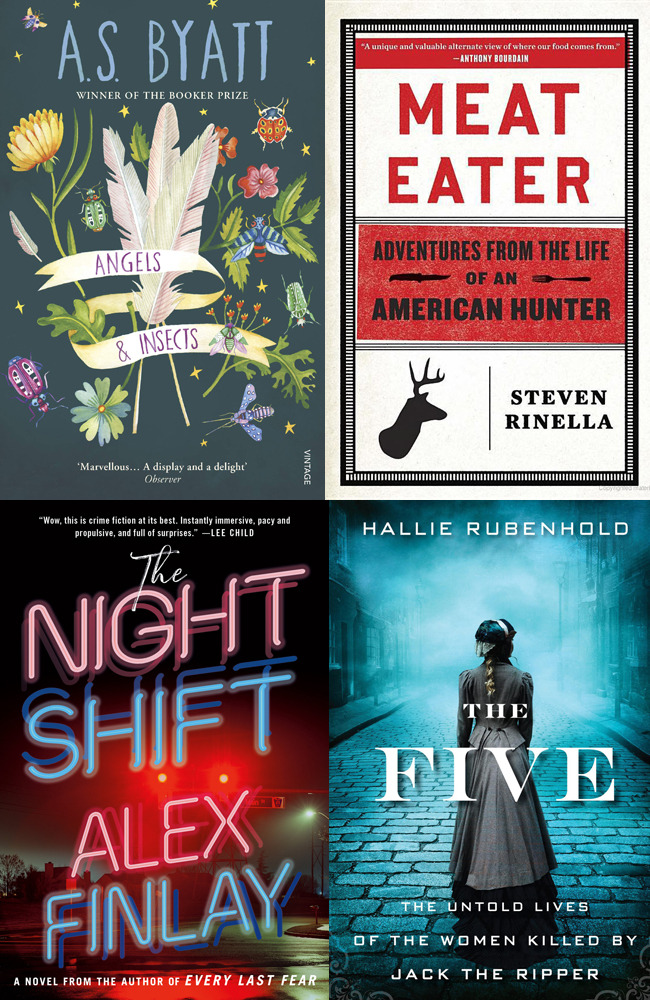 Angels and Insects by A.S. Byatt:

I didn’t think much of A.S. Byatt’s The Children’s Book when I first read it, and I liked Possession (arguably her most famous book) even less, but now, a few years after I finished translating The Children’s Book, I’ve come to appreciate it more and enjoyed its depiction of life in Edwardian England. Also, after reading Terry Pratchett’s biography, I learned that Byatt has always been one of Sir Terry’s staunchest defenders, while other literary types tend to dismiss his books as lowbrow stuff, which goes a long way toward endearing Byatt to me. So, I decided to try one of her other books.

This actually contains two novellas, “Morpho Eugenia” and “The Conjugal Angel”. “Morpho Eugenia” (the basis for the 1995 film Angels and Insects) bears some similarities to The Children’s Book – it’s about an outsider (a shipwrecked naturalist, in this case) who is taken in by an aristocratic family and becomes drawn into their seemingly idyllic life while uncovering some messed-up family dynamics. I enjoy the description of the family’s life and how it mirrors the insects that the main character is observing; however, it gets bogged down by too many passages from the various books that the characters are trying to write. This is also what I also dislike the most about The Children’s Book and Possession. I don’t mind a few excerpts here and there if they add to the overall story, but when I can skip most of them and still follow the plot, they’re a distraction. 3.5/5

“The Conjugal Angel” deals with the Victorian craze for spiritualism and follows several people in a séance. One of the characters is Emily Jesse, the younger sister of Alfred, Lord Tennyson, who was engaged to Arthur Hallam, the subject of Tennyson’s poem In Memoriam – both the poem and Emily’s relationship with Arthur play important roles in the novella. This one is more abstract, with a less clear-cut plot. Though some of the descriptions of the characters’ emotions and inner thoughts are interesting, they border on stream-of-consciousness and get too repetitive for me. 2/5

Meat Eater: Adventures from the Life of an American Hunter by Steven Rinella:

I read this as research for a script I’m writing – I have no interest in hunting, and would never have read a book on hunting otherwise. However, I do have an interest in the “return to nature” kind of lifestyle, and this book is very much about that. Though the author loves hunting for its sense of adventure and nature communion, he also hunts for a much more prosaic reason – for meat (even with mountain lions! I didn’t know you could eat mountain lions). So despite my initial hesitation about the subject matter, this approach makes the book a lot more enjoyable. It also helps that the author managed to discuss the ethics and morals of hunting without sounding preachy or macho about it, was very candid about his past mistakes, and clearly loves and respects the animals he hunts and always makes sure their deaths serve a purpose. It may not have converted me into a hunter, but it does give me some interesting information for my script. 4/5

The Night Shift by Alex Finlay:

November is a busy month, so I wanted something easy and straightforward – a murder mystery. This one has an interesting premise: in 1999, four teenagers working at a small town’s Blockbuster are brutally murdered, leaving behind only one survivor, and 15 years later, a similar crime occurs, which brings together three people – the first survivor, now a troubled therapist; the brother of the suspect in the first case, now a lawyer; and a pregnant FBI agent – to figure out the truth. The mystery is pretty absorbing, and even though I managed to guess the identity of the killer early on, it didn’t ruin the read for me. The ending is a bit rushed though, and the characters, while likeable, are not that memorable. 3/5

The Five: The Untold Lives of the Women Killed by Jack the Ripper by Hallie Rubenhold:

I was looking for a book on Jack the Ripper when I came across this, and thought it looked interesting. Rather than focusing on the murders themselves, it’s an ensemble biography of the five “canonical” Ripper victims – Polly Nichols, Annie Chapman, Elizabeth Stride, Catherine Eddowes, and Mary Jane Kelly – and the circumstances that led to their murders. In doing so, the book offers a look at life in Victorian London, especially the hardship endured by women (because contrary to popular belief, the five Ripper victims were not prostitutes, not professional ones anyway, but rather women who had fallen on hard times.) It’s not your typical Jack the Ripper book, but it makes for a fascinating and harrowing read nonetheless. 4/5

(The only problem is, I’m still looking for my definitive Jack the Ripper book. Any suggestion?)