So apparently October was a busier month than I thought, because I only managed 3 books. But they’re interesting books, so it’s fine. 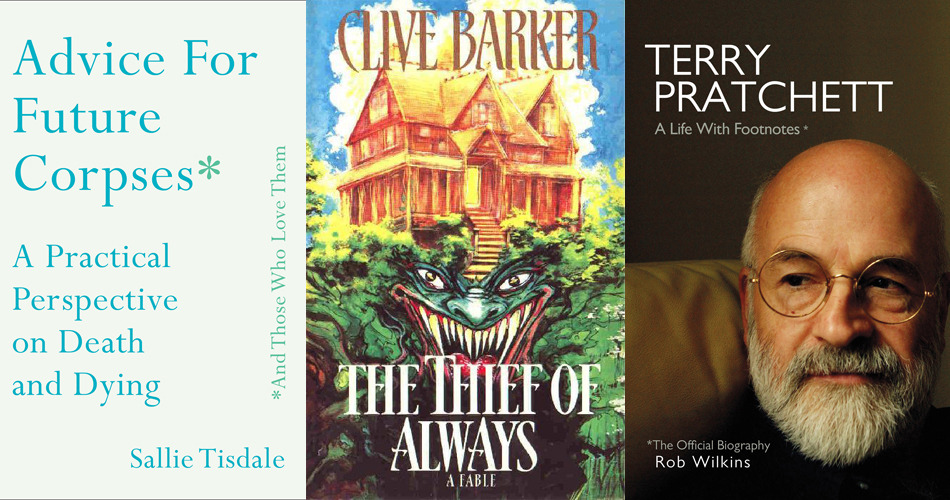 Advice for Future Corpses (And Those Who Love Them) by Sallie Tisdale:

Talk about a misleading title. I picked this for my October/Halloween read because the title sounds hilarious and slightly macabre, and I was expecting something along the line of Stiff by Mary Roach. However, it turns out to be a fairly standard self-help book about death, your own as well as your loved ones, and how to prepare yourself for it, mentally and physically (I should’ve looked more closely at the Goodreads shelves and noticed the lack of “Humor”). It’s pretty well-written and I was fascinated enough by the subject to keep reading, and there is some quite practical advice, which I appreciate, but in the end, it wasn’t what I wanted. Perhaps I should’ve gone for Will My Cat Eat My Eyeballs instead. 3/5

The Thief of Always by Clive Barker:

I’ve never read Clive Barker (only know him as the mind behind Hellraiser), but I know I’m too much of a wuss to read his books for adults, so for Halloween, I decided to try one of his kid’s books instead. I remember reading somewhere that this book was an influence on Neil Gaiman’s Coraline, and I can definitely see that – it’s about a boy who, out of boredom, accepts an invitation to come to a house filled with delights, only to discover that it holds sinister truth. It reminds me of Joe Hill’s NOS4A2 as well, if it’s told from the POV of one of Manx’s victims. Anyway, it’s not as creepy as I expected – more of a dark fantasy than a horror, really (Coraline is way creepier) – but it’s scary enough for a Halloween read. 4/5

Terry Pratchett: A Life with Footnotes by Rob Wilkins:

Finally, here’s the book for which I’ve been mentally preparing myself the whole month – Sir Terry Pratchett’s biography, based on his own notes and written by his assistant and collaborator, Rob Wilkins (Discworld fans would know him as the namesake of the Vimes’ butler, Wilikins, and the Nac Mac Feegle Rob Anybody). As biographies go, it’s very straightforward – it simply follows Terry’s life from his birth to his death – but for his fans, it is a must read. There is no shocking revelation here, to be sure (Terry lead a very ordinary life, and he got to where he was by incredibly hard work), but it confirms everything I know about him from Discworld – his worldview, his humor, his compassion, even his anger. The last few chapters, which detail Terry’s battle with Alzheimer’s (or, as he termed it, the “Embuggerance”), are hard to read, but his bravery still shines through (funnily enough, there is a mention of Terry and his dying wish of having his unfinished books destroyed in Advice for Future Corpses.) The only thing that spoils my enjoyment of the book is how much more funny and biting it would have been, had it been written by Terry himself. But that would have been a different book. Wilkins did a great job, and I think Terry would’ve been happy with how he is presented. 5/5