It’s a very standard month of reading for me, but the books are all quite interesting, so it’s enjoyable nonetheless: 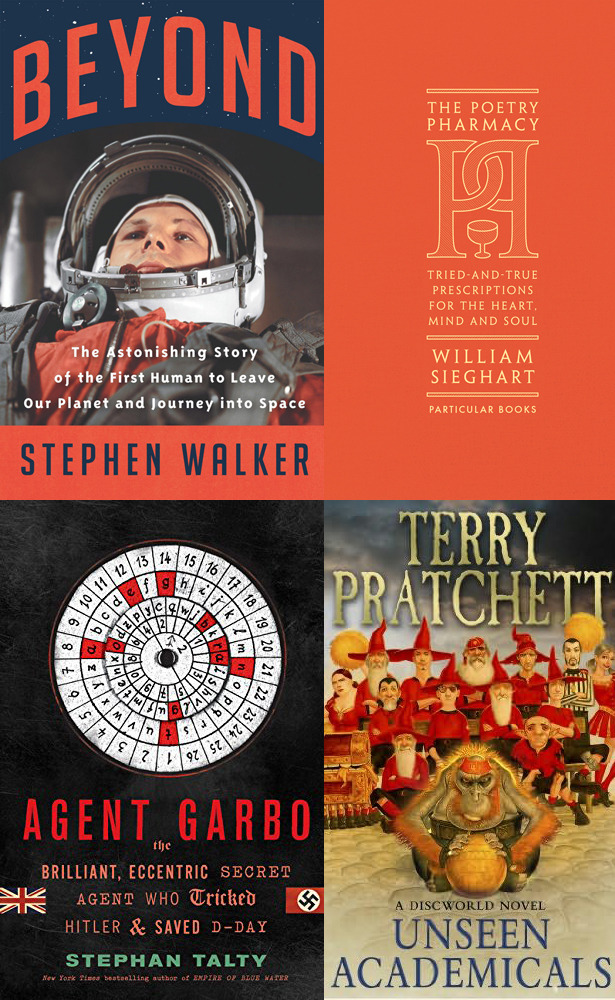 Beyond by Stephen Walker:

As I grew up in a communist country, the name Yuri Gagarin may have been more familiar to me than Alan Shepard or John Glen, but even so, I don’t know much about Gagarin other than the fact that he was the first human in space, nor do I know much about his journey. So I was quite excited to check out this book – but it’s not just about Gagarin, despite the cover. You can’t talk about him without mentioning the US side of the space race as well, so this is best described as a book about the space race with a focus on the Russians. I don’t mind that, though, because it’s very well researched and well written (the parts describing the animal test flights can be particularly harrowing). It’s interesting to find out how much the Russians have kept their space program a secret, which makes the book all the more extraordinary. 5/5

I’ve been feeling a bit burned out – about everything in general, but about books in particular. I was no longer excited about my TBR list. So as a remedy, I picked something short and different – a poetry book. I’m still trying to read more poetry, and so far I’ve only picked collections from certain authors. This, on the other hand, is an anthology, and each poem is chosen to alleviate a certain spiritual complaint, be it anxiety, depression, loneliness, or what have you (hence the “pharmacy” part). I actually didn’t read it all the way through, but picked and chose the poems depending on my mood that day. I didn’t love all of the poems chosen in this book, but I love its concept. It’s a great way to discover new poets, and it also teaches me how to appreciate poetry – I used to read a poem like prose, focusing on what it says and how it says this, but now I’d try to read it like a song, focusing on the rhythm and flow of the words and how it makes me feel. 4.5/5

I first read this story on Tumblr, of all places – at the beginning of WWII, Juan Pujol, a Spanish chicken farmer, went to the British Embassy offering to be a spy for them, and when they turned him down, he went to the German Embassy instead. Once they took him on, he started feeding the Nazis false information until the British took notice and made him a bona fide double agent. It sounds absolutely bonkers, so when I found out there’s a book, of course I had to pick it up. However, the book isn’t as enjoyable as I’d hoped. The beginning, which detailed Pujol’s background and how he became a self-made spy, is very rushed. Once he got retained by MI5, his work became less chaotic and the book turns into a more or less standard spy biography, which is fine, but I didn’t find it as fascinating as Pujol’s journey to get there. 3.5/5

It’s been a while since I read a Discworld book. I only have 4 left (3 now) and I’m trying to make them last, but to prepare for Sir Terry’s biography, which comes out on September 29th (tomorrow!), I’ve decided to read this to prepare myself for it. I’ve read an excerpt of the biography and it already made me cry, so I need some silliness to counter that. This one is, ostensibly, about football/soccer, but like with other Discworld books, it’s not just about football. It’s about mob mentality, about how where you came from could define who you are, and how you should not let it define who you are. The plot is a little thin and it’s not as profound as say, one of the Death books, but the Wizard/Rincewind books are never very deep anyway, and I still chuckled out loud while reading it, which is all I wanted. 4/5