Another great month of reading (in terms of quantity; the quality is not great but not terrible either), and eclectic as always: 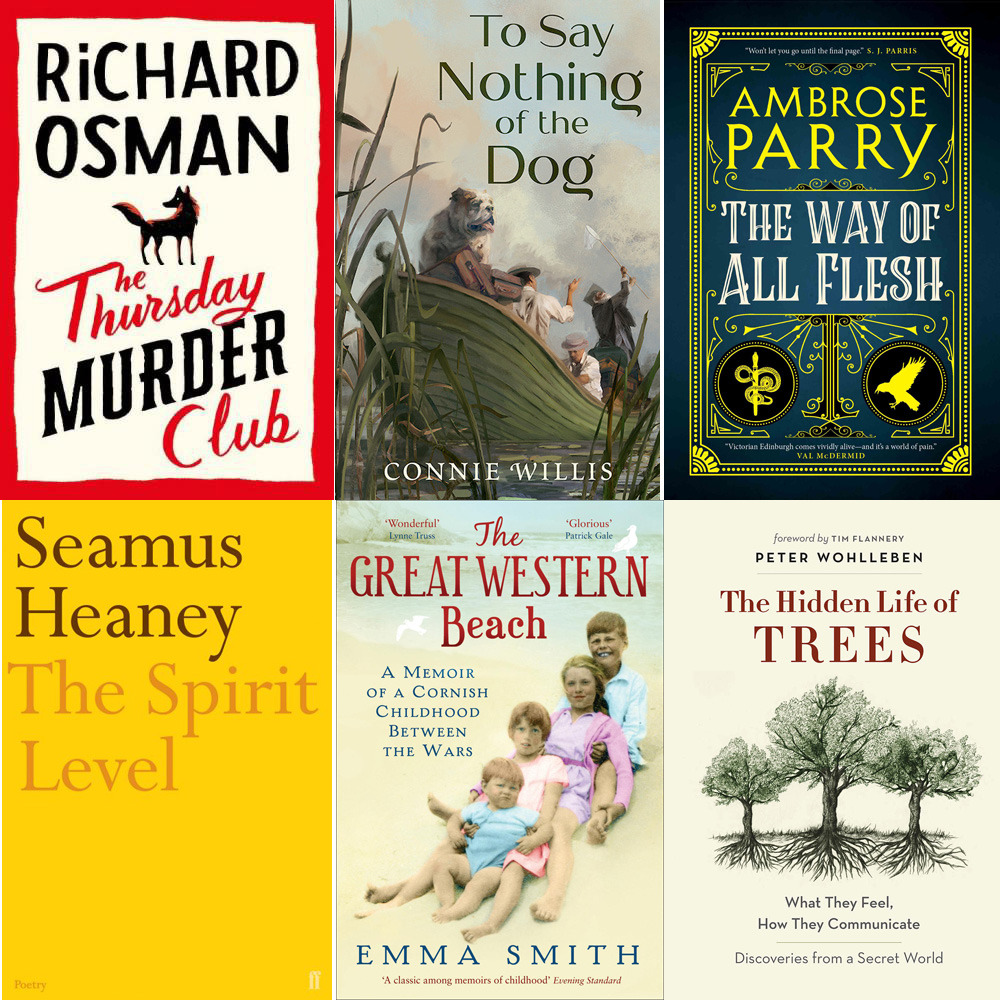 I only know Richard Osman from his appearances on British comedy panel shows like Would I Lie to You and Taskmaster, but I’ve heard good things about this book and it seems to scratch my “British murder mystery” itch, so I decided to check it out. The premise is simple enough – four retirees form a “murder club” to discuss unsolved cases and add some excitement to their lives, but when a real murder occurs in their retirement village, they find themselves getting involved in the investigation. I was expecting something like Miss Marple, but I was sorely disappointed. The investigation moves like molasses; each chapter switches to a different POV, which causes the whole thing to be so fragmented and repetitive; and the resolution is super easy – basically, the characters just sit the killer(s) down and say “Right, we know you kill these people. Now tell us why.” And it’s not even funny! I slogged through it because I hate to leave a book unfinished, but when I reached the end, I couldn’t care less. 1/5

To Say Nothing of the Dog by Connie Willis:

For a bit of fun, I decided to pick up this book, described as a “time travel romantic comedy”. It takes place in a world where time travel is possible but only used for research/study and revolves around a history student who is sent back to Victorian England for a rest after too many trips back and forth in time. Here, he finds himself in an adventure reminiscent of Jerome K. Jerome’s Three Men in a Boat (To Say Nothing of the Dog) – hence the title – and having to prevent a disruption in the space-time continuum. I’ve read Three Men in a Boat a while ago and quite enjoyed it, and this one is enjoyable as well. It’s a bit slow and rambling at first, as the book doesn’t spend a lot of time on world-building, but once you get used to it, it picks up considerably. It reminds me a lot of the Thursday Next series, from the quirky sci-fi elements and the literary homage to the quintessential Britishness of it all. 4/5

The Way of All Flesh by Ambrose Parry:

I’m working my way through my TBR list so the books are a bit all over the place. This murder mystery, which takes place in 19th-century Edinburgh, sees a medical student teaming up with a housemaid to solve a series of gruesome deaths involving pregnant women. I was drawn to it because of the setting (Edinburgh is one of my favorite cities) and the grim, potentially graphic quality of the story could serve as a good counterpoint for the cozy mystery of The Thursday Murder Club (warning: it is quite graphic though. There are some detailed descriptions of difficult childbirths and amputations.) However, the pacing is super slow – the investigation doesn’t begin in earnest until halfway through. Plus, the writing is a bit clunky, I think in an attempt to make it sound old-timey. The characters are not bad though, and the other books in the series look promising, so I may check them out one day. 3/5

The Spirit Level by Seamus Heaney:

“The Way of All Flesh” was a bit heavy – at least viscerally – so I tried to lift my mood and lighten my mind with some poetry, turning, as usual, to Seamus Heaney. But my mind wasn’t entirely in it, so I struggled with this more than usual and had to turn to this website, which analyzes Heaney’s poems, to help me understand some of them. Still, there are some poems which, though their exact meanings may have escaped me, I was able to enjoy just for their sheer rhythms and melodies (A Brigid’s Girdle, Postscript). Some of my favorites, though, are the ones with very simple subject matters, but their emotions and meanings still come through (Mint, A Call, The Butter Print.) 3/5

(Unrelated, but why do poetry books have such boring covers? I believe more people would read poetry if the book covers were more exciting. I know I would.)

The Great Western Beach: A Memoir of a Cornish Childhood between the Wars by Emma Smith:

I’m working my way through my TBR list, which is why my books this month are a bit all over the place (more than usual, I mean.) This book serves as a nice break after The Way of All Flesh – it’s a memoir of the author growing up in Cornwall from 1924 to 1935. However, it’s not as fun or idyllic as, say, Gerald Durrell’s Corfu trilogy, for example, because the author’s home life is less than ideal – she and her siblings are terrified of their father, who is bitter and cruel, and their mother is understandably depressed. Luckily, their maid is a great comfort, and the friendly and eccentric neighbors are a source of fun and support as well. The book does a great job of capturing a child’s memories – it’s written in first-person present tense, and each section gets longer as the author grows up and her memories become more detailed. I’ve always enjoyed reading about everyday life in the past, so even though nothing much happens, the beach picnics, tea parties, various incidents (both pleasant and not) the author experienced, and her childlike yet accurate observations of people more than make up for the lack of a proper story. 4/5

The Hidden Life of Trees by Peter Wohlleben:

I got this book last year along with a bunch of books about trees and nature (Entangled Life, What a Plant Knows, and The Forest Unseen). If I had read it back then, I would probably enjoy it more, but having read all the others, this one just feels repetitive, because all the information is similar to what I’ve already read. It feels repetitive within the book itself as well – it mostly just talks about beeches, oaks, pines, and spruces of Central Europe. What about the other species and other locations? Plus, I’m not a fan of the cutesy writing (referring to saplings as youngsters and teenagers and such). The good thing is that the chapters are short, so it’s a quick read. 2/5