I actually managed 11 books (the Hebridean books are a trilogy, and a Miss Marple reread) in the past two months, which is a record for me. Let’s check them out: 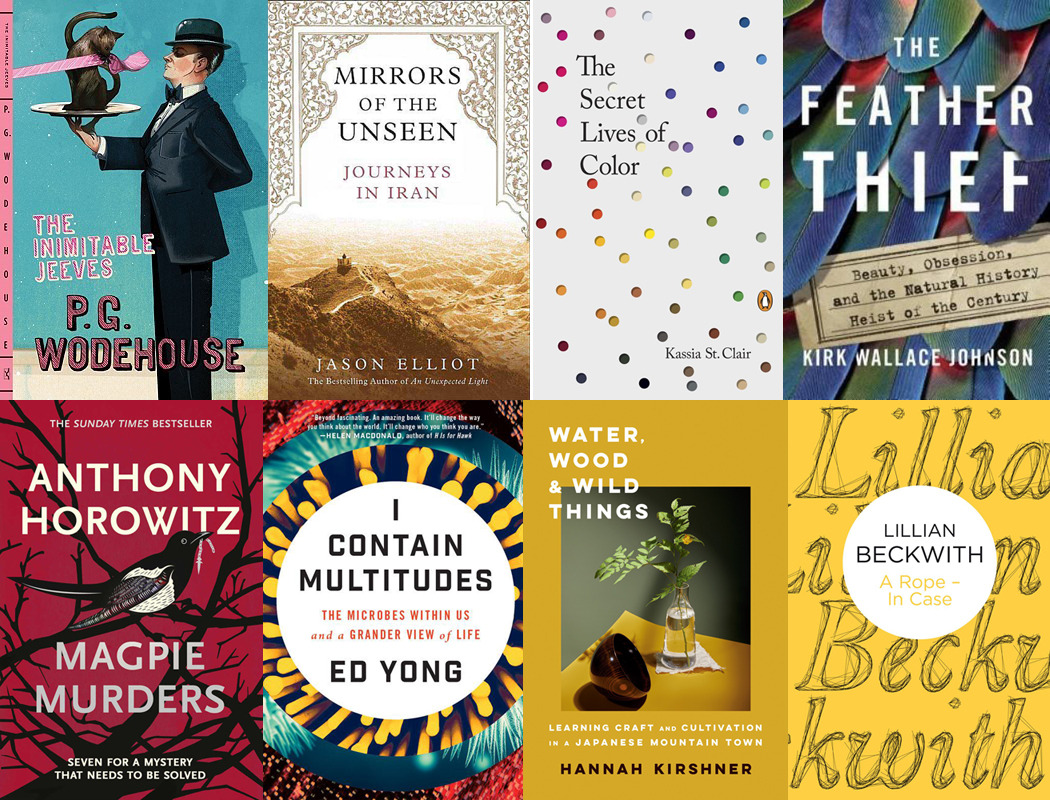 The Inimitable Jeeves by P.G. Wodehouse:

After the Mapp & Lucia books turn out to be not as funny as I’d hoped, I decided that if I wanted comedy about the upper middle-class, I should just go straight for the classics (this is technically the second book in the Jeeves series, but it’s the first to feature both Jeeves and Wooster, so I’m counting it as the first.) I’ve known the Jeeves stories from Jeeves & Wooster, the TV series with Stephen Fry and Hugh Laurie (and indeed, as I read this, I heard the dialogue in their voices), but this is my first time actually reading them, and here I finally found the super dry, super British sense of humor I was looking for. Some of the slang and references took me a while, but the humor is still there. There is not much plot either – it’s pretty much a series of sitcom-like stories – but that’s the great thing about it; I could pick it up and put it down whenever I want. Now, to rewatch the Fry & Laurie series… 4/5

Mirrors of the Unseen: Journeys in Iran by Jason Elliot:

Out of all the trips I’ve taken in the past few years, Iran is one of the most memorable – it’s so completely different from anywhere else, and the combination of the awe-inspiring landscapes and architecture and the warmth of its people make it an irresistible destination. This February marks the 3-year anniversary of my Iran trip, so it’s the perfect time to pick this up. The author’s journeys are a lot more in-depth than your usual tourist’s trip – he had three years and many hosts and guides amongst the locals – but I still enjoy reliving my trip through them. My one complaint is that he tends to get too detailed with the art and architecture, which I find rather distracting. I don’t mind reading about them, but not at the expense of the travel stories. All those musings about the history and meaning of Islamic art could have been a separate book – I mean, when the book is actually telling the readers to skip a section if they’re not interested in Islamic art, then it’s not a well-structured book. 3.5/5

The Secret Lives of Colors by Kassia St. Clair:

The Iran book was a bit of a slog to finish, so I went on to something lighter and easier – a book on colors. It’s a series of short essays about the history, anecdotes, and trivia surrounding 75 selected colors, ranging from white to black and everything in between. It’s a very quick read – almost too quick, as I wish each chapter could go a bit deeper into the history of each color – but enjoyable and informative nonetheless. 4/5

When I read the summary of this book, I knew I had to pick it up because it just sounds so weird. It’s a true-crime account of how a man broke into the British National Museum in 2009 to steal hundreds of rare bird specimens for their feathers and sell them on the fly-tying (as in artificial flies for fly-fishing) underground market, and the author’s own search for the missing birds 5 years later. Who knew that fly-tying was such an obsession that it would even have a dark side?! It’s definitely not about the flies (most tiers don’t even know how to fish); it’s about possessing something rare and beautiful – like the feathers of endangered birds. The book goes into the histories of the specimens themselves, of the craze for exotic bird feathers, and of fly-tying, which reached its height in the 19th century, but I still don’t understand it. And I don’t think the author does either – it’s clear that he’s condemning that obsession and blaming the fly-tying community for allowing such a crime to happen. But there’s no denying that the book is absorbing and well-written, even if the subject matter is terribly niche. 4/5

I seem to have unwittingly gone with an avian theme, though this book cannot be more different from “The Feather Thief” – it’s also about an investigation, yes, but it’s a whodunit, a rather meta homage to the Golden Age of Mystery. In it, a book editor receives the latest – and last – novel from a famous mystery author, only to find that the novel is missing its last section, so she must set out to solve two mysteries – those of the novel and the author’s untimely death. The first half of the book is the manuscript of the novel itself, which is pretty good, but the second half, which consists of the “real world” investigation of the editor, is a little slow. I’d expected that solving the murder in the manuscript would also solve the author’s murder, but it’s actually the other way around, which feels too simple. Plus, I was annoyed at a number of glaring typos – at first, I thought they were intentional (since the manuscript of the novel is a first draft) and perhaps even clues, but nope. It’s kind of ironic that a book about an editor-turned-detective didn’t even have a decent proofreader. 2.5/5 (I actually had to re-read my favorite Miss Marple story, “Sleeping Murder”, after this, just to remind myself what a good whodunit is supposed to be like.)

I Contain Multitudes: The Microbes within Us and a Grander View of Life by Ed Yong

It seems a bit counterintuitive during a viral pandemic to read about microbes and their effects on our life, but this book doesn’t just discuss diseases or talk about how microbes can be good for you. Rather, it gives us a closer look (no pun intended) at microbes, the complex relationships they have with other organisms, humans included, and how we can – and are trying to – manipulate those relationships to our benefit. I’ve never been a germaphobe, but this book certainly gives me a new perspective on microbes and their many functions. It gets a bit drawn-out at times, but the subject matter is fascinating enough that I still find it quite accessible. 4/5

Japan has always been one of my dream destinations – in fact, two years ago, I’d planned a trip to Japan before the pandemic put it on indefinite hold. So, in lieu of traveling, I’ve been looking for travel books on Japan so I could live vicariously through them. This one immediately grabbed my attention because it is the sort of travel I wish I could do – to stay in the country for an extended period of time and really get to know it. The author, an American food stylist, went to Yamanaka, a small mountain town and former hot spring resort, to learn about its traditional ways – everything from tea ceremony and sake-brewing to woodturning and lacquer-making – while also connecting with the local community. It’s clear that she loves and respects Japanese culture, but she never fetishizes it or glorifies its more old-fashioned aspects. Accompanied by the author’s own lovely pen-and-ink illustrations and recipes, the book beautifully captures the essence of Japanese culture. 5/5

The Second Hebridean Trilogy (A Rope – in Case, Lightly Poached, and Beautiful Just) by Lillian Beckwith:

Last year I fell in love with Lillian Beckwith’s semi-autobiographical books about her life on a remote Scottish island, and this year, as I’m feeling a bit stressed (just about the general state of the world), I went back for more. Some of the stories are not as funny as in the previous trilogy – some of them are quite sad, actually – but it’s still so comforting to read about the work on the crofts, the many gatherings with the neighbors, and the eccentric villagers and the natural wonders of the island. Sometimes these books really make me wish I could just pack everything and leave… 4/5