I’ve never been one for theme reading, but for some reason, this October, I felt like reading something a bit spooky (probably because October this year is appropriately chilly and Halloween-y, instead of still being uncomfortably warm), so I decided to read all horror/thriller. Here goes: 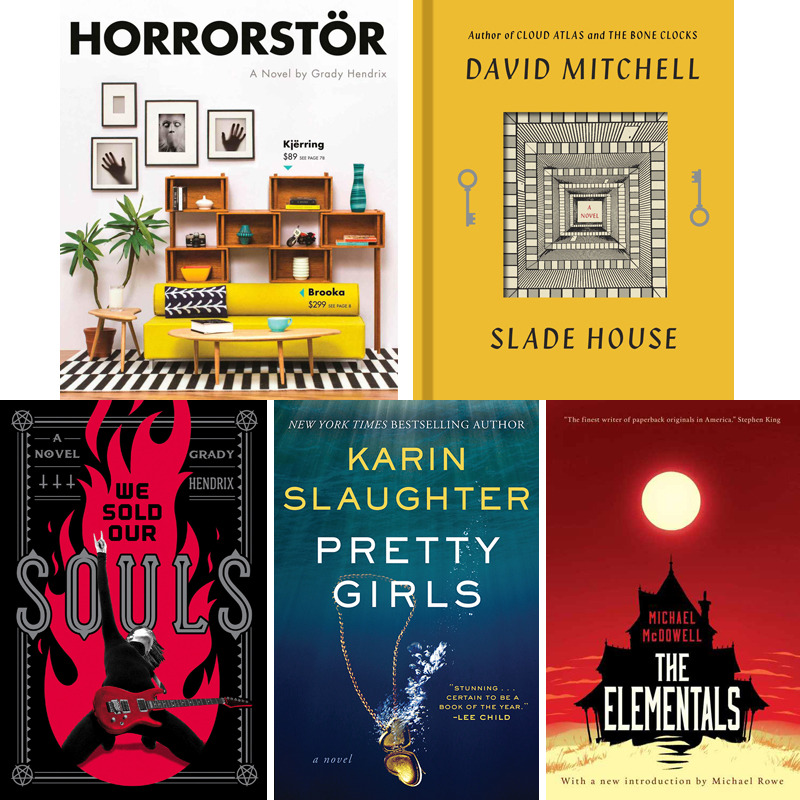 I started my month of spooky reads with this haunted house horror set in an IKEA-like superstore. It starts out well (it reminds me of China Mieville’s short story “The Ball Room” – now that’s a spooky one!) as the store employees experience strange things around the store and stay for an overnight shift to figure out what’s going on. However, as the mystery is revealed, it becomes a little too tangible for me – it’s still tense, but not so scary anymore. I prefer books like The Haunting of Hill House, which relies more on terror and the unknown and let your imagination do most of the work. Still, it has some good parts and is a super quick read. 3/5

We Sold Our Souls by Grady Hendrix:

I saw this one by the same author while I was checking out Horrorstör and thought it looked interesting – it’s about a former guitarist of a 90s metal band who discovers that the lead singer literally sold the band’s souls to some dark force in exchange for fame and fortune for himself, and now, as he’s preparing for the biggest tour of his career, she must set out to stop him and get back what’s rightfully hers. Since I’m doing a month of horror/thriller anyway, I decided to pick it up. I’m not much of a metal fan (not 80s/90s metal anyway. I did listen to some nu metal back in high school), but I do understand the power of music and the feeling that, with the right song, you can change the world, so I quite enjoyed this. The story and characters are more developed than Horrorstör, though not particularly scary (it’s gory, for sure, but I never find gore scary.) My only complaint is that the mythology behind the soul suckers is not quite clear, which leads to a rather rushed ending. 4/5

This is a more straightforward thriller than what I usually read – a woman, after her husband’s death, discovers that he may have something to do with the disappearance of her eldest sister over 20 years ago and countless other missing women. The first half of it is pretty gripping, but then we have a “twist” reveal that is… not stupid, per se, but convoluted and implausible, and it completely took me out of the story. Plus the bad guy is so cartoonishly evil and depraved, and his evil deeds are so far-reaching, that I find the story unbelievable. Like a Michael Bay movie, it’s not bad if you don’t think too much about it. 2/5

Now this is a more traditional Halloween read. It’s a series of stories all taking place in a mysterious house that can only be found once every nine years, when its inhabitants – a pair of sinister brother and sister – would invite a hapless visitor and steal their soul. Apparently it takes place in the same world as one of the author’s previous books, The Bone Clock, but you don’t need to read that one to enjoy this. It’s spooky and a little trippy but not downright scary (it actually reminds me a lot of Coraline), and even though in each story, we know what’s coming (each visitor finds their reality collapsing around them as they’re lured deeper and deeper into the house), there is still that “Oh shit!” moment when we realize what’s really going on. However, I never really connect to any of the characters, and the ending is, you guess it, a bit rushed, so I’m only giving this 4/5

The Elementals by Michael McDowell:

Two Alabama families, after the death of one of their matriarchs, go to their summer houses on the Gulf Coast for a vacation, only to encounter some unknown, vicious horrors in one of the houses, which is abandoned and filled with sand. Michael McDowell was best known for writing the screenplay for Beetlejuice, but I’ve never read any of his books before, and this is also the first Southern Gothic horror I’ve read. It’s very atmospheric – yes, the “monsters” make some memorable appearances, but the true horror of the book comes from a vague but pervading sense of menace and oppression from both the setting and the characters. There is no explanation of what the monsters are or where they come from either, which doesn’t make for a very satisfying ending, but certainly adds to the horror. 4/5

That was fun. I may have to do some more themed reading in the future!