It’s a pretty eclectic month of reading, even by my standard. Here goes: 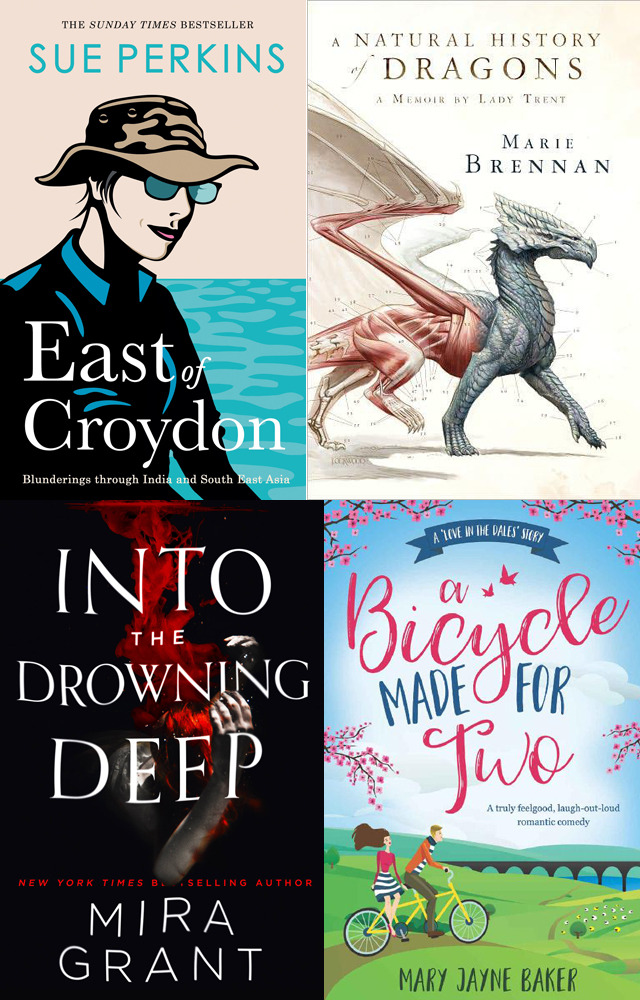 East of Croydon: Travels in India and South East Asia by Sue Perkins

I like Sue Perkins as a presenter both on The Great British Bake-Off and The Supersizers. I like traveling. I live in South East Asia. So when I came across a book about Sue’s travels during her making of a documentary about the Mekong River, of course I had to pick it up. It’s as funny as I’d expected though – it’s a mix between hilarious travel/childhood anecdotes and poignant and even depressing observations about life. And then it gets really depressing, in the parts about the environmental destruction in China and the abject poverty of India and the devastation of her father’s death. It’s powerful stuff, but a bit too heavy for me. 3.5/5

A Natural History of Dragons by Marie Brennan:

Written as a memoir of a lady naturalist/explorer who looked back upon the expeditions of her youth to study the mythical dragons, this is a fun take on the usual fantasy adventure genre. However, I have a few quibbles. One, the world-building is less-than-imaginative – why bother changing the names of the countries when they’re clearly based on the real world (Scirland = England, Vystrana = Russia, etc.)? Just write it as an alternate history (like Jonathan Strange & Mr. Norrell) and be done with it. And two, I don’t connect with the characters, and as a result, the story feels very low on tension. Sure, there are physical hardships and dangers, but the personal stakes are not there. The very fact that the main character is alive and writing her story as an old woman lets us know that she will be fine, and as for her companions, I’m not invested enough to care what happens to them. 2.5/5

Into the Drowning Deep by Mira Grant:

So I move from one fantastical creature to the next – from dragon to mermaid. But this isn’t your typical Ariel. The book revolves around a research ship that goes out to the Mariana Trench to find out what happened to a previous ship that went missing there seven years ago, leaving only behind footage of man-eating mermaids. The idea of killer mermaids sound awesome, and I like the author’s other works (as Seanan McGuire), but this one is a bit disappointing. One, everyone seems to treat the loss of the original voyage as a mystery and keeps saying they will find out “what really happened”, but we know what happened – there is footage of the mermaids attacking and eating the crew – so they’re not finding out what happened; they’re only confirming it (it may be just semantic, but it really bugs me.) Two, it is so, so slow. The technical and scientific stuff about the ship and the research is very dry. I figure it was included to make the story more realistic, but I was hoping for “Aliens” and got a scientific manual instead. And all the personal details weigh the story down as well – I don’t want to read about a character’s struggle with their marriage/love life/disability/sexuality if it has nothing to do with the story! By the end of the book, I’m actively cheering the mermaids on to kill them all… but of course, the ending turns out to be a disappointment too, because it screams anti-climax. 2/5 (and that’s only because the mermaids are cool.)

A Bicycle Made for Two by Mary Jayne Baker:

I don’t read much romance (or even at all), but after the slog that is “Into the Drowning Deep”, I want something light and easy to relax with. I picked this up because it’s set in the Yorkshire Dales, one of my dream destinations, and the story – about a woman trying to get the Tour de France to come to her village – actually sounds fun. I still find the romance part a bit annoying (I find the main character’s chemistry with one of the side characters much sweeter and more believable than with the love interest), but the rest of it is not bad. 3/5