I read 5 books this month, and since I’ve been reading a lot of non-fictions lately, I decided to have a full fiction month. Here goes: 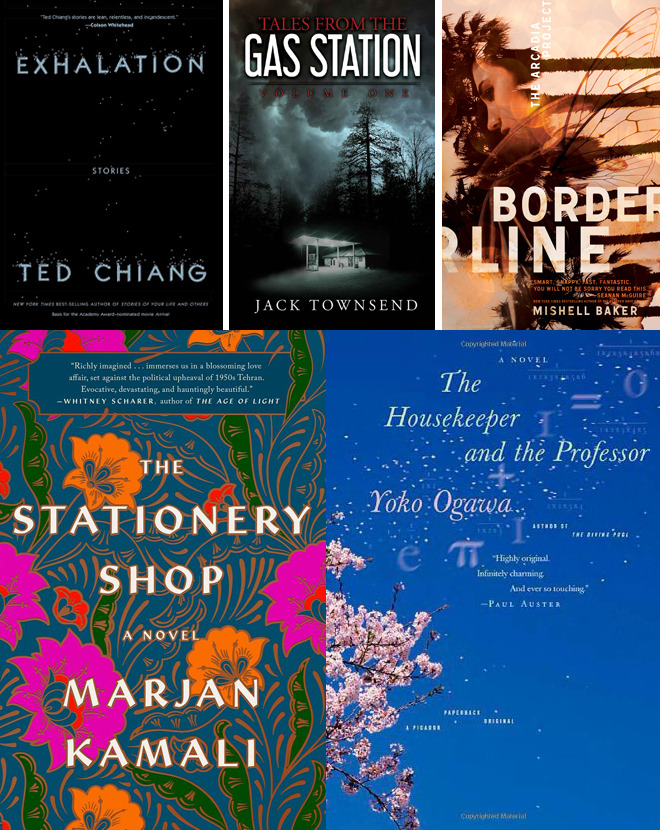 I’m starting with a short story collection by sci-fi writer Ted Chiang, since I’ve heard a lot of good things about him. However, while some of the stories have interesting ideas, I didn’t enjoy them as much as I thought. They tend to be too technical and philosophical without much emotional resonance, and they all more or less deal with the same theme – the fact that there is no true free will – which I find repetitive and rather depressing. I may still check out Chiang’s other collection, Stories of Your Life Others (the novella Story of Your Life is the basis for the film Arrival) but I wouldn’t call him my new favorite author. 3/5

Tales from the Gas Station: Volume 1 by Jack Townsend

This book is about a gas station where a lot of weird/unsettling things happen, and at the center of it is a clerk who has learned to turn a blind eye to these events and documents them in a nonchalant, matter-of-fact way. It got a chuckle or two out of me, but considering that it’s based on a creepypasta, I expected it to be a lot more, well, creepy. The stories are just too out-there to be believable urban legends, and the decision to join them up into an overarching plot doesn’t work, because there are too many loose threads. I kept reading in the hope that there would be a point to it all, but in the end, there is no point. It would be much better as a series of unconnected stories. A very generous 1.5/5 (that half star is only because it doesn’t annoy me.)

This is basically the movie Men in Black but with fey instead of aliens – a young woman with borderline personality disorder, who recently survived a suicide attempt, is recruited by an agency that monitors all fey activities in our world. I picked this up because it’s set in LA, and, having lived in LA for 7 years, I was interested to see how the book combines urban fantasy with the movie industry. The basic concept is that a lot of successful people in the movie/creative business have the help of fairy “muses”, and in turn, the fairies can benefit from the humans’ reasoning and organizing skills (it’s pretty similar to the idea of the fairy servants in Jonathan Strange & Mr. Norrell). The agency also recruits people with mental problems because they are more acceptable of the magical world (again, this is similar to the correlation between madness and magic in Jonathan Strange & Mr. Norrell). The world-building is good, but I never quite connect with the main character, who is defined solely by her BPD, and the main plot, which revolves around the search for a missing fairy, feels too easy. Still, it’s interesting enough that I might check out the rest of the series. 3/5

The Stationery Shop by Marjan Kamali:

As a change of pace from all the dark sci-fi and fantasy, here’s a romance: two teenagers fall in love in 1953 Tehran, but are torn apart by political upheaval and fate, until fate again brings them back together 60 years later. I enjoyed all the descriptions of life in 1950s Tehran (it’s the main reason I picked this up), but I was reminded of why I don’t read romance much – I just don’t buy it. I don’t buy that the main characters can fall in love so quickly and completely (they’re 17!!! What the heck do they know?), and that their love is still going strong 60 years later. It’s not that I’m a cynic either, but it’s just that I’m more of a fan of “slow burn” romance, you know? There are some good parts that are quite moving though, so I still give this 3/5

The Housekeeper and the Professor by Yoko Ogawa:

I was going to read this after “The Traveling Cat Chronicles” last month, but I figured two slice-of-life Japanese novels in one month would be a little redundant, so I saved this until July. It revolves around a housekeeper working for a math professor whose memories only last 80 minutes due to an accident, and the friendship that develops between her, the professor, and her young son. Like most of the Japanese novels of this type, not much happens – or rather, everything is understated and the book leaves you to reflect on your own feelings, rather than tell you how to react – but despite that, or perhaps precisely because of that, it is still very moving. 4/5