I managed six books this month (some are quite short though), and they are as eclectic as ever: 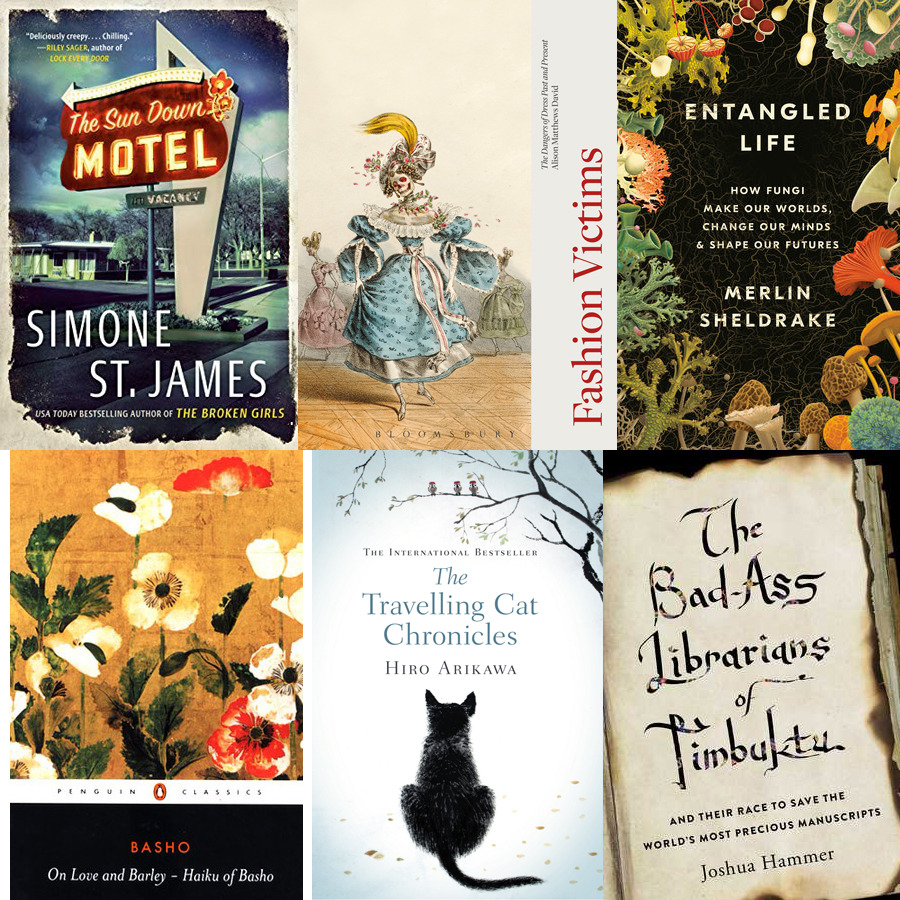 The Sun Down Motel by Simone St. James:

NOS4A2 has put me in the mood for some horror, so I picked this up because the story seems interesting – it follows two storylines, one of a young woman in 1982working at a supposedly haunted motel and disappearing from there, and one of her niece, 35 years ago, who goes to the motel to find out what happened to her aunt. The story is nicely spooky, but the characters are boring, and I find the niece’s crush on a guy-with-a-tragic-backstory (of course he does) so eye-rolling. Plus, the author has this annoying habit of describing people’s clothes and hairstyles in detail which has little to no significance in the story. 3/5

Fashion Victims: The Dangers of Dress Past and Present by Allison Matthews David

I’ve wanted to read this book for the longest time, because it takes a look at one of my favorite genres – fashion history – from a different angle: how clothing can kill, through poisonous dyes (arsenic green), chemicals (mercurial hats), body-altering extreme silhouettes (crinolines and hobble skirts), and other gruesome means. It’s a fascinating subject, and it also points out how, even in our world today, the health and well-being of workers are still overlooked for the sake of fashion. So it’s really too bad that the book is super dry. It reads like an academic research paper. I can only imagine how much more entertaining it would be if written by a more humorous author, like, say, Mary Roach. 3/5

Fungus is the least studied and least understood of all the natural kingdoms, and this book, which revolves around fungi and their effects on the natural and human worlds, goes to show how little we know about them. There are some very interesting bits about “zombie fungi”, how fungi create a “wood wide web”, and how they can be the material of the future (fungal leather, anyone?) However, it doesn’t pull me in as much as I’d hoped. The author is clearly passionate about his work (and by the way, how awesome is his name? It sounds like a Harry Potter character. Heck, the guy even looks like a Harry Potter character), but the organization of the book leaves something to be desired. The chapters jump from one subject to the next instead of going from the basic to the more complex, so while some bits and pieces grab my attention, the book as a whole feels rather rambling. 3.5/5

On Love and Barley: Haiku of Basho by Matsuo Basho, translated by Lucien Stryk:

In my attempt to read more poetry, I thought I would try some haiku. The simple language and the focus on natural imagery sound right up my alley, and what’s a better place to start than Basho, one of the most famous Japanese poets? However, I think haiku may be too simple for me, if that makes sense? It requires a certain amount of Zen-like focus to appreciate the beauty of these poems, and I read too quickly for that. This is an entirely me problem, though, so I still give the book 4/5 (afterward, I sought out the Vietnamese translation of some of Basho’s haiku and did enjoy them better, so it may be a translation/language problem as well.)

After Basho, it seems natural for me to pick up this Japanese novel about a cat going on a road trip with his owner. Their journeys are told from the cat’s point of view, and the owner’s backstory is also revealed while he visits old friends in order to find the cat a new home. I was expecting something quirky and lighthearted, but, and the reason why the owner can no longer keep the cat gradually, heartbreakingly becomes clear, I found myself bawling my eyes out. Read it and give your pet a hug afterward. 4.5/5 (and that’s only because the theme of the story is a little on-the-nose.)

The Bad-Ass Librarians of Timbuktu by Joshua Hammer:

I picked this up because the title sounds awesome, and the subject matter – a group of librarians banding together to save valuable centuries-old Arabic manuscripts from Al Qaeda in 2012 – sounds awesome as well. The start is strong enough, as it introduces the man behind the operation, Abdel Kader Haidara, and talks about the history of Timbuktu as a center of culture in the 15th and 16th centuries. However, the book then starts focusing on the rise of Al Qaeda in the Malian desert, and I lost interest. Why do we have to go into such detail about the backstory of the Al Qaeda leaders, while Haidara only gets a chapter with some broad strokes about his childhood and no explanation as to how he became such a passionate and dedicated collector (he had inherited his father’s library quite reluctantly)? And so many of his fellow librarians, who risked their lives to save these manuscripts, remain nameless? Basically, there is too much focus on Al Qaeda and not enough on the manuscripts and the librarians themselves. 2/5