← Between Flowers And Insects
Listen, My Children, And You Shall Hear →

The first two months’ reading has been interesting. I read 9 books, and as usual, they’re an eclectic mix of fiction and non-fiction. There are some Vietnamese books too. Let’s get to them: 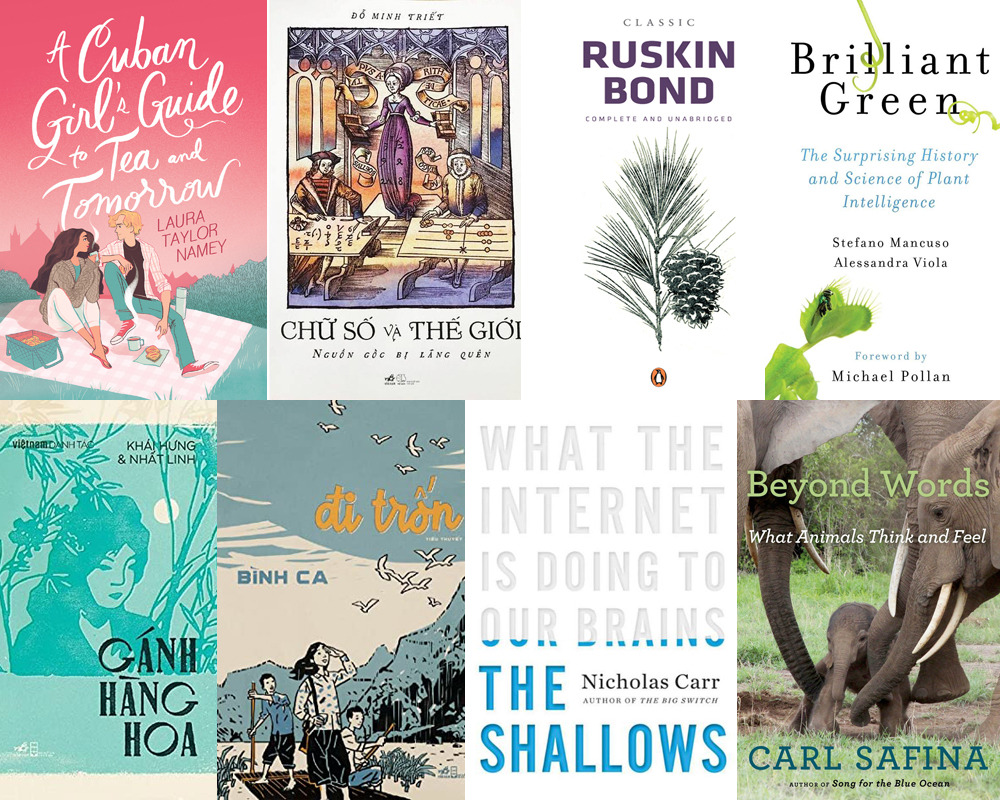 A Cuban Girl’s Guide to Tea and Tomorrow by Laura Taylor Namey:

I wanted something easy and cozy to start the year, and although this book (YA chick lit) is not my usual fare, it has two things that spark my interest: it’s set in England and revolves around food (baking, to be precise). The main character is Lila, a Cuban-American girl sent to stay with her aunt in England to recover after a series of heartbreaks – her beloved grandmother passed away suddenly, her boyfriend broke up with her, and her best friend changed their plan for the future without telling her. Then, of course, she meets an English boy and all is well. The story is cute, too cute in fact – there isn’t a lot of drama here, despite what the book keeps telling us. And perhaps because I’m an Anglophile, but I find Lila rather whiny – imagine having to spend three months in England with free room and board, the horror! This seems to be a recent common complaint of mine with YA books – the main characters all come off as whiny, spoiled brats. Maybe I’m getting too old for this shit. 2.5/5

This book about the history of numbers, written by a Vietnamese mathematician, was a Teacher’s Day present from my students, who said they didn’t know what kind of fiction I like, so they picked a non-fiction book to be safe (very sensible of them.) I’ve read a lot of books on the history of languages and other social sciences, but never on numbers before – it hadn’t even occurred to me that numbers could have such a long and diverse history – so this is fascinating to read. Some technical bits (such as how people used to do math when they had no zero and even no concept of zero) are a little difficult to follow, but overall, it’s well-researched and quite engaging. 4/5

The Room on the Roof and Vagrants of the Valley by Ruskin Bond:

I discovered Ruskin Bond last year from a short story collection, so this year, I decided to read two of his novels – “The Room on the Roof” (written when Bond was only 17!!!) and its sequel. They are autobiographical, telling the coming-of-age story of an Anglo-Indian boy who runs away from his abusive guardian, makes friend with the local youths, and experiences love as well as heartbreak. Like Ruskin Bond’s other writings, both books are simple, quick reads, but they’re about profound things like growing up, first love, friendship and solitude, and finding your identity and your place in the world. They can be too prosaic at times, but after you finish, the characters will surely stay with you. 3.5/5

I picked this up because the premise (proving that plants are just as intelligent and animated as animals or even humans) sounds interesting, but as I read it, I realized I was the wrong audience for it. This book is for someone who knows nothing about plants and thinks of them as inanimate things, because the evidence cited by the author to prove the existence of plants’ intelligence is very basic and well-known. I was hoping for more explanations as to how plants know how to do these things (for example, how did the Venus fly trap evolve into a carnivorous plant?), but there is very little of it. 2/5

This novella is a classic of Vietnam’s Romanticism movement (1930-1945), so I’m well acquainted with the story; I just never read the actual book until now. It’s about a struggling student who, after an accident renders him partly blind, gains unexpected fame as a writer, but it also causes him to betray his loyal wife, a flower seller. Written at a time when Vietnamese literature was hugely influenced by French romance novels, this can be very maudlin and melodramatic, but there is something charming in its naïveté, and the description of life in the olden days is always a plus for me. 3/5

This is another Vietnamese book, which tells the story of a group of teenagers who run away from their evacuation camp during the Vietnam War (which, in Vietnam, is called the American War) and go on an adventure in the wilderness of Northwest Vietnam. I picked it up because I enjoy this kind of adventure stories, but this one turns out to be a disappointment. The writing is rather dry, and the story takes itself so seriously that the fun and innocence of the kids’ adventure are lost. There are some interesting bits that describe life in an evacuation camp, but that’s about it. 2/5

The Shallows: What the Internet Is Doing to Our Brains by Nicolas Carr:

For the last couple of years, I noticed that my ability to concentrate has gone down considerably – before, I used to be able to read two or even three screenplays a day, but now I’m lucky if I can read one a day. I blame burn-out (if the script is well-written, I can finish it much more quickly), but there appears to be more than that, and this book confirms I’m not the only one suffering from this form of ADD. It takes a look at the concept of neuroplasticity and explores how intellectual technologies, starting from maps and the printing press, all the way to the Internet, have affected the human brain. It’s not anti-Internet or anti-technology, but it certainly makes you think harder about how you can use technologies without losing yourself to it. I only wish it was a bit more entertaining to read – it can be a bit dry at times. 3/5

Beyond Words: What Animals Think and Feel by Carl Safina

This book focuses on three animals – the elephant, the wolf, and the killer whale – and the science of animal behaviors and answer the questions: Do animals feel? Do they think? Do they communicate (both with each other and with us)? It goes to show that we humans are a lot more similar to animals (we are, after all, animals too) than we think. It can be heartbreaking to read at times, especially the parts on how callously we treat these animals and consider ourselves superior to them simply because we can think and feel and talk. However, it’s also powerful, beautiful, and moving. 5/5