Usually, around this time of year I’ll post my yearly book reviews, but as I’m doing my “yearly review” posts next week, I thought I’d post my monthly reviews now. It’s another eclectic collection: 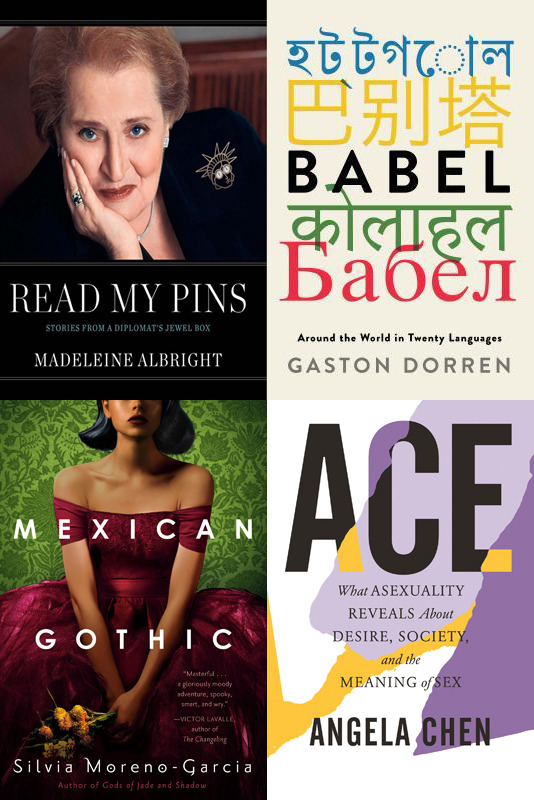 Read My Pins: Stories from a Diplomat’s Jewelry Box by Madeleine Albright

I know that Madeleine Albright was Secretary of State under Bill Clinton and was the first woman to hold that position, but I didn’t know that she is also famous for her collection of brooches and pins. Just like Ruth Bader Ginsberg (RIP) and her collars, Madeleine Albright used her brooches to send certain messages and convey certain images, and this book shows us a number of those brooches along with stories of their significance to her. You guys know I love my brooches, so this book really speaks to me. What I love about Albright’s attitude to her brooches is that the sentimental value of each brooch is far more important than its monetary value. And of course, the accompanied photo illustrations are beautiful and make me green with envy. 5/5

Babel: Around the World in 20 Languages by Gasten Dorren:

The title says it all – it’s a Gothic novel set in Mexico in the 1950s, in which a spirited young socialite is sent to a remote town to check on her cousin, who has married into a family of English mine owners and is now sickening and behaving oddly. I’ve never actually read any classic Gothic novel (unless you count Jane Eyre and Wuthering Heights), so I quite enjoyed it. It’s very atmospheric and reminds me a lot of Crimson Peak. However, it can feel too familiar – I appreciate the subtext of colonization and racism, but I think it can dig a lot deeper and put a new twist on the traditional Gothic tropes. Plus, book commits the cardinal sin (in my opinion) of making the main character an observer instead of directly involving her in the plot, so there isn’t much urgency behind her journey until the very end – and even then, she doesn’t exactly discover anything; it’s all told to her. 3/5

Ace: What Asexuality Reveals About Desire, Society, and the Meaning of Sex by Angela Chen:

After being disappointed by “Let’s Talk about Love” and its failure to represent asexuality in a nuanced and interesting manner, I have to turn to a non-fiction book instead. Using interviews, social studies, and the author’s own experiences, this book explores what it means to be asexual in a society where sexual desire is treated as default. It really resonates with me – I don’t think I’ve ever highlighted so many passages in a book before. It’s really helped me to better understand not just asexuality, but sexuality on a whole. On the other hand, it made me a little depressed that in this day and age, asexuality is still so misunderstood and underrepresented, and a non-fiction book like this is unlikely to change that. What we need is more representation in the media. Maybe I should get on that. 4/5

Stay tuned for a yearly review of all the books I’ve read!