Another eclectic selection of books this month (but then again, when have my books not been eclectic?) – here we go: 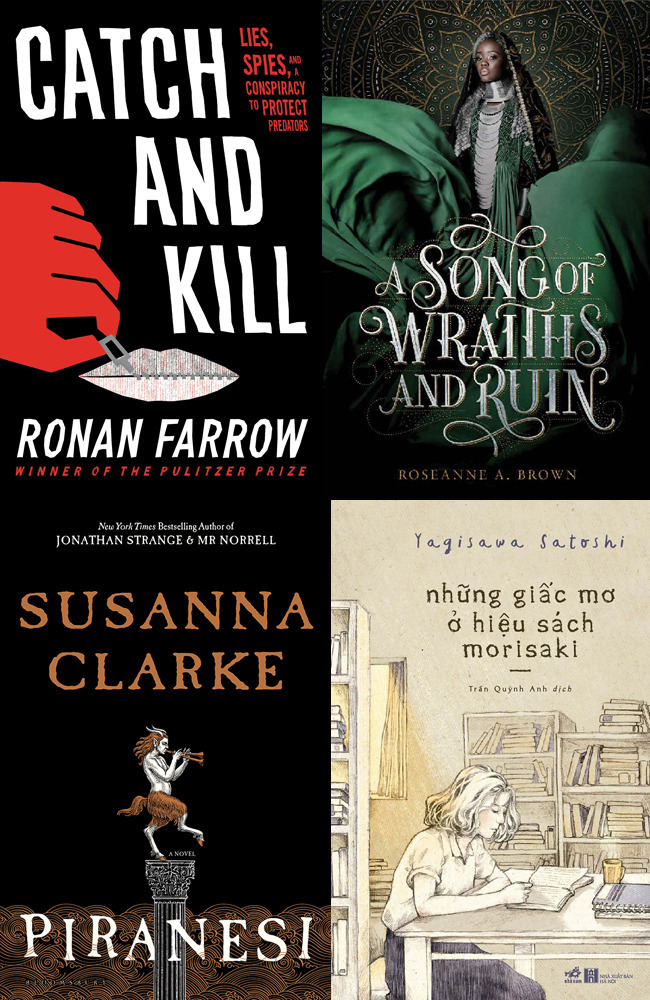 I only know the broad strokes of the Harvey Weinstein scandal – that he was exposed for decades of sexual abuse/assault/harassment, and that it sparked the #MeToo movement. I didn’t know that Ronan Farrow was one of the reporters behind the story (he is no stranger to sex abuse scandals, being the son of Mia Farrow and Woody Allen), and I definitely didn’t know how difficult it is to even get the story out, as the. I remembered not feeling shocked about Weinstein’s crimes at the time (mostly because I didn’t know their details, but also because his predatory tendencies have been an “open secret”, even to one with some marginal knowledge of Hollywood), but now, reading this book, I was shocked at how long they have been going on and how systematically they were covered up. It’s truly harrowing to read. 5/5

A Song of Wraiths and Ruins by Roseanne A. Brown:

After “Catch and Kill”, I wanted something to take my mind of the horrible reality of it all, so what’s better than a YA fantasy that takes inspiration from West African mythology? The cheesy title has me rolling my eyes a little bit, but the story is actually interesting – it revolves around a boy who must kill a princess to save his sister from an evil spirit, and the princess, who must kill a king to bring her mother back to life. There are the usual YA sci-fi/fantasy tropes, such as people being divided into different categories and a competition for some high prize, but the African mythology helps to set this apart. However, I can’t connect to the main characters, especially the princess, who is a whinny, spoiled brat. Yes, I know she’s only 17 and this is all overwhelming for her, what with being the sole surviving member of the royal family and all, but can she go just one minute without complaining about it and doing something completely selfish? Plus, I find the writing a bit expository, so the rich mythology doesn’t come through as clearly as it should. There will be a sequel, but even in this first book, there is too much information and story, making it really rushed. 3/5

This is the second novel of the author of Jonathan Strange and Mr. Norrell, and it explores many similar themes – the idea of magic being gone from our world, the search for the other, magical world, and the relationship between magic and madness, to name a few, but in many ways, it’s completely different. For one thing, it’s quite slim (245 pages), and it’s much more intimate – it mostly deals with one man, Piranesi (not his real name), who inhabits a strange, vast, labyrinthine House, with a sea in its basement, clouds on its top floor, and thousands of statues in between. It is Piranesi’s entire world, and he explores it both for himself and at the behest of an older man, the Other (because he’s the only other person in this world), who is in search of a great and ancient knowledge. As Piranesi explores the House, the truth begins to emerge about who he is, who the Other is, and what is really going on. I managed to guess the reveal quite early on, but it doesn’t detract from the story – the beauty of it is not in the reveal (if anything, the reveal is a little too neat and convenient for me; I was hoping for something more twisted), but in how it affects the main character. 4/5

There is no English edition for this, so I’m linking it to the Vietnamese translation. This slim and simple book tells the story of a young woman who goes to live at her uncle’s used bookstore after discovering that her boyfriend is two-timing with another girl. Here, amongst the dusty old books and the eccentric people that frequent the store, she finds a way to heal her broken hearts and helps to heal a few other hearts along the way. I’d read anything with the word “bookstore” in the title, and although this is not my usual fare – like I said, it’s very simple, almost simplistic even, but that’s the beauty of it – I quite enjoyed it. 3.5/5