I only managed three books this month, but they’re all pretty dense, so here goes: 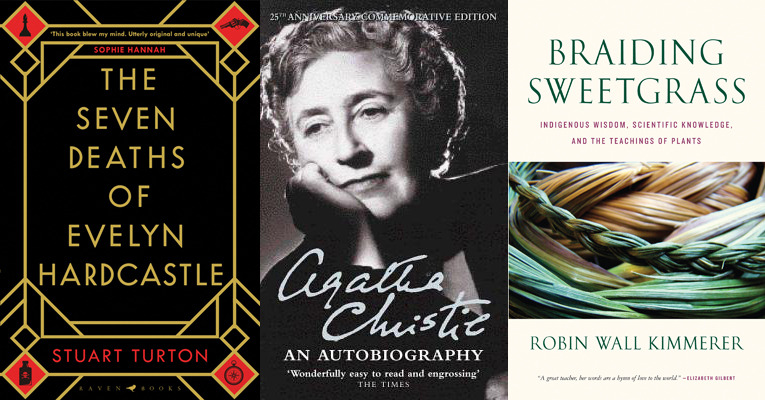 The Seven Deaths of Evelyn Hardcastle by Stuart Turton:

Groundhog Day meets Gosford Park with some body-switching thrown in: during a house party at an English mansion, a man wakes up in somebody else’s body and is told he will get to relive the day eight times, in eight different “hosts”, in order to solve a murder, and only in doing so can he escape the time loop. The idea is interesting, but it gets bogged down by the how and the why of the body-switching and the time loop, which distracts from the murder mystery. Plus, from the setup, I was expecting some huge reveal, and although there is a twist (of course there is, it’s a mystery), the resolution feels rather anticlimactic and still leaves some questions about the time loop unanswered. I’d prefer it if it didn’t explain the time loop at all (like in Groundhog Day) 2.5/5

I noticed that recently I’ve been doing this a lot – going from one book to another of similar genre/subject matter/theme. Here, I went from a murder mystery to the autobiography of the Queen of Mystery herself. I don’t read a lot of biographies, and my knowledge of Agatha Christie mostly consists of the adaptations of her books, but she happened to live in England in the first half of the 20th century, and I’m a sucker for anything set in that time and location (I Capture the Castle, Nancy Mitford’s books, Merchant & Ivory films, etc.) Agatha Christie actually had a pretty ordinary upper middle-class life – compared to the standard of that time, of course – but her recollection makes it extraordinary. I especially love her descriptions of her idyllic childhood and her travels, such as her trips around the world and to the Middle East on the Orient Express. Modern-day travel may be more convenient, but you can’t have the same sense of glamor and romance. 5/5

I was still feeling non-fiction-y after Agatha Christie’s autobiography, so I reached for this book by a Potawatomi botanist. It’s a series of essays in which the author combines her Native American heritage with her scientific knowledge to explore the relationships between humans and plants – both good and bad, what plants can teach us about ourselves and the world, and what we can do to return their gift. It’s beautifully written, and though it gets a bit too philosophical/spiritual for me at times, other parts can be very touching, and it really makes you think. 4/5