I missed last month’s reviews because of SIA, so here are the books I read during July and August (I actually read 11 books but 6 of them are very short and in the same series so I counted them as one): 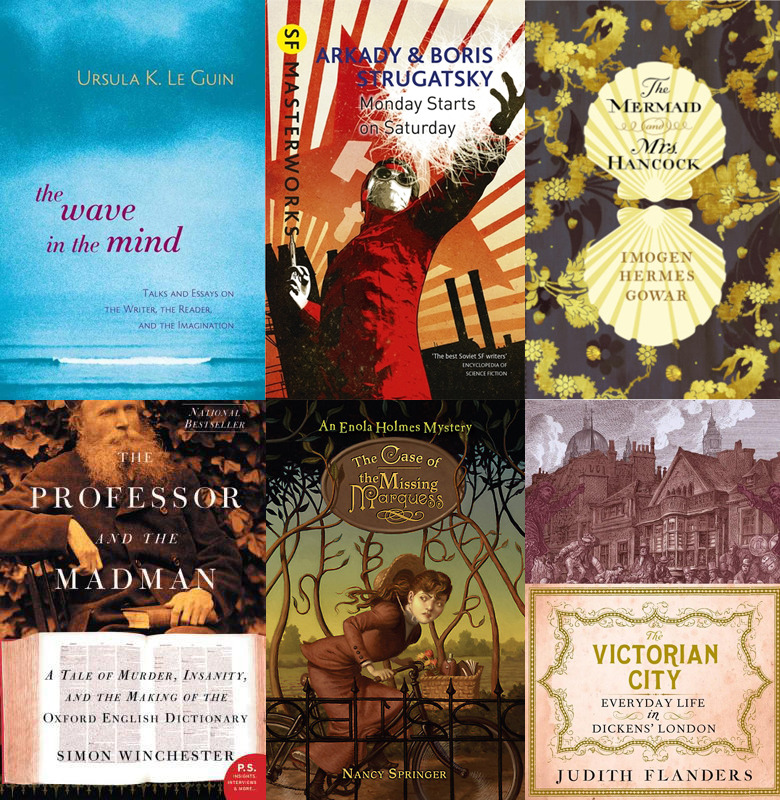 The Wave in the Mind by Ursula K. Le Guin:

I have tremendous respect for Ursula K. Le Guin, but after translating her Earthsea series and reading The Left Hand of Darkness, I have to admit that her novels are not for me. So when I saw this book of her essays and talks, I decided to pick it up just to see if I prefer her non-fiction writing, and as it turns out, I actually do! It has the same thoughtfulness and quiet (and sometimes not so quiet) passion as her novels, but some of it is much funnier than I thought Le Guin could be and her ideas and observations about writing and reading are quite thought-provoking. The part about the rhythm of prose gets a little technical for me, but overall, I enjoy it. 4/5

After Roadside Picnic, I decided to give the Strugatsky brothers another go with this book, which is much more my style – a computer programmer is roped into working for the Nation Institute for the Technology of Wizardry and Thaumaturgy (conveniently abbreviated as NITWIT), and soon discovers that when magic and socialism collide, chaos is not far behind. This has been compared to both Harry Potter and Discworld for its depiction of magic study, but actually, in terms of tone and structure, I find it much closer to The Hitchhiker’s Guide to the Galaxy – it’s a series of loosely connected comic sketches, in which the bizarre and the banal go head-to-head (and the banal often ends up winning.) I think the comedy could be a lot stronger, to show how absurdly bureaucratic a communist-socialist institution can be, but it’s quite a fun read. 3.5/5

The Mermaid and Mrs. Hancock by Imogen Hermes Goward:

“Magical realism set in England revolving around a creepy mermaid” seems like an oddly specific description, yet I managed to read two books that fit it in just a few months, the first being Things in Jars, which is set in Victorian time. This one, which takes place in the late 18th century, is less of an outright fantasy; it only uses a fantastical element (the mermaid) to tell a human story – a widowed merchant comes into possession of a dead mermaid, and in the course of trying to make money from it, he crosses path with a courtesan who is trying to find some security in her life. The book draws me in right away with its vivid description of life in Georgian England, but that and the gorgeous cover are its only good points. The plot moves like molasses; the characters are foolish or selfish or both, and their actions make no sense – they act like completely different people from one moment to the next simply because the plot dictates it. Plus, there are a lot of subplots that never go anywhere, including one about a mixed-race prostitute that should have been its own story. 1.5/5 (and that’s only because the world-building is good.)

The Professor and the Mad Man by Simon Winchester:

I’ve always been interested in languages and the history of languages, so this book is right up my alley. It is about the making of the Oxford English Dictionary and two remarkable men involved in the monumental task – James Murray, the self-taught editor of the OED, and William Minor, an American doctor incarcerated in an asylum for the criminally insane, who was one of the dictionary’s most prolific volunteers. However, I find the story of the OED actually much more interesting that William Minor’s life, no matter how many times the book tells me how “sad” or “tragic” it is. Yes, it is sad, but I’d like to read more about his work on the OED and how this work helped to improve (or at least seemed to help) his condition, instead of about the condition itself. 2/5

After some pretty heavy books, I wanted something easy and fun, and having recently learned about the movie adaptation of this YA series, which revolves around the teenaged sister of Sherlock Holmes, I decided to pick it up (besides, any story that necessitates the casting of Henry Cavill as Sherlock Holmes is worth checking out. Henry Cavill, I tell you! It’s got to be one of the most out-there interpretations of the character that I’ve ever seen.) As their mother disappears and her brothers set on sending her to boarding school, young Enola runs away to London to search for her mother herself. Each book follows a different case Enola investigates while the search for her mother continues. They’re very quick read, and while the cases are fairly simple, the stories are not dumbed down at all. The representation of female characters has always been one of my problems with the Sherlock Holmes series, so it’s great to have a different perspective. More importantly, Enola is a relatable character – she is smart, but unlike other “girl detectives” I’ve read like Flavia Luce or Mary Russell, is not precocious – she makes mistakes and is vulnerable, and that goes a long way toward making her more sympathetic. 4/5

Going from a fictional series set in Victorian London to a non-fiction book about everyday life in Victorian London seems natural to me. This book, as the title says, details life on the streets of London (so no domestic stuff, just public) as it is described in Dickens’ works as well as the works of other contemporary writers, covering everything from city planning, transportation, and sanitation, to food and entertainment. It’s very well researched and the information is interesting, but because there is an enormous amount of it and the author doesn’t seem to want to cut anything out, it’s a slog to read. It didn’t help that I read it before bed – I often found myself turning the pages without retaining a single word, because it’s all so dense. 2/5