I only managed three books this month, but one of them is an absolute whopper, so it’s OK. Here goes: 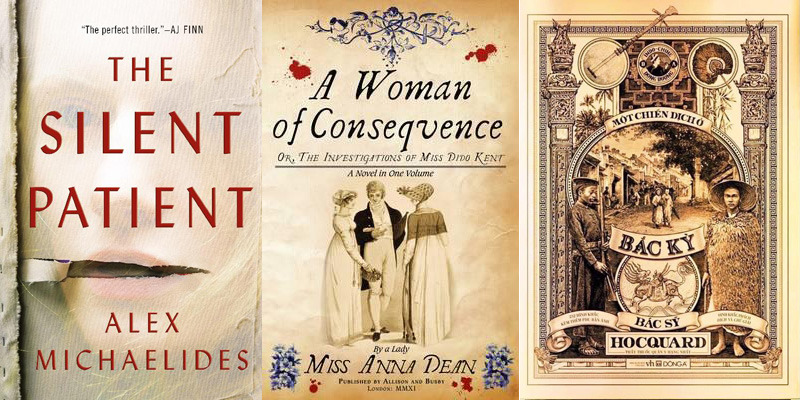 The Silent Patient by Alex Michaelides:

I don’t read a lot of them, but I do enjoy a mystery book from time to time, and this book certainly features an intriguing mystery: a successful artist in a seemingly happy marriage suddenly shoots her husband in the face and tries to commit suicide, and afterward refuses to speak another word. The book follows her psychotherapist as he tries to figure out what really happened and how he can help her. Like I said, it sounds promising, but the book is a total flop. I don’t like any of the characters; the writing is boring; the twist (of course there is a twist) is idiotic, and (spoiler) there is no adequate explanation why the main character just stopped talking (she claims she “had nothing to say”, which is totally not true.) I was so mad that I wasted my time with this. 1/5 (if I could give it zero, I would.)

A Woman of Consequence by Anna Dean:

I went from one mystery to another, but this one is definitely lighter. It follows a Regency spinster, Miss Dido Kent, as she investigates a case of possible haunting that may be connected to a 15-year-old disappearance at a local estate. Basically, it’s Jane Austen meets Agatha Christie. The mystery is interesting, but there are too many subplots weighing it down, and I find the characters a little irritating, especially Dido’s love interest. Still, it’s fun to read, and if I should come across another one in the series (this is actually the third book), I’ll pick it up. 3/5

A Campaign in Tonkin by Charles-Edouard Hocquard, translated by Dinh Khac Phach: (There is no English translation so I’m linking this to the Vietnamese translation)

Part travelogue, part war memoir, this was written by a French army doctor who traveled to Tonkin (the name for North Vietnam during the French colonization) to participate in the French-Sino war (1884-1885). It offers detailed observations of life in 19th-century Vietnam, from everyday things (including a pretty gruesome description of a decapitation) to life at court, accompanied by photos taken by the doctor himself. It’s exactly the kind of thing I love to read, but I’m always frustrated with Vietnamese books of the same subject because they are too academic and not detailed enough. This one hits the spot. Of course, it was written from the point of view of a colonizer, so there are some questionable attitudes and opinions here and there, but mostly it’s an unbiased and often enthusiastic account of his experiences in Vietnam. My only complaint is that it’s an absolute door-stopper (600+ pages) which makes it a pain to read in bed. 4.5/5

So what did you guys read?