It’s an OK month of reading – a balance of fiction and non-fiction, mostly female writers (I’m trying to read more books by female writers), but unfortunately, none of the books is that memorable. 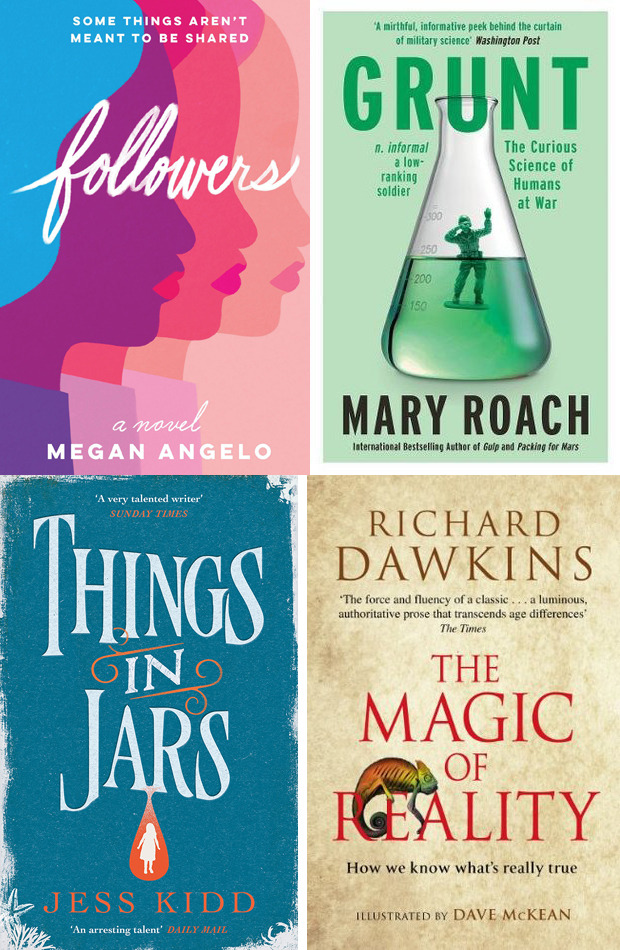 After a month of non-fiction last month, I thought I would get back to something lighter, so naturally I picked a post-apocalyptic drama about the collapse of the Internet. Actually, it’s not as heavy as it sounds – this book contains two storylines, one following a wannabe writer in 2015 who hatches a plan to make her roommate (and herself, by extension) Internet-famous, and another following a government-appointed social media influencer in 2051, who lives her whole life like “The Truman Show” (except she knows she’s on camera), and how those two storylines intertwine. The book does a pretty good job of capturing the entire culture of Instagram and influencers and predicting a chilling future for it, but it can be overwrought at times (I almost quit when I read “white” described as “the color of the space between people”. Ugh.) Still, the story is timely and the characters are relatable. 3.5/5

Grunt – The Curious Science of Humans at War by Mary Roach:

I saw the Vietnamese translation of this book at a book fair, and because Mary Roach is one of my favorite non-fiction writers and because I haven’t seen a lot of translations of non-fiction books yet, I decided to check it out. This one, like Mary Roach’s other snappily-titled books, explores a particular field of science – in this case, military science, which includes everything from uniform design to the creation of stink bombs, the use of maggots in treating injuries, how to stay awake on a nuclear submarine, and so on. I’m pleased to say that most of the humor translates quite well into Vietnamese (though sometimes I found myself translating the jokes back into English to see if they work – a force of habit, I suppose), but the science itself is not as interesting compared to her other books. Maybe I’m just not interested in military science. 3/5

Things in Jar by Jess Kidd:

When I saw the blurb of this book – a mystery set in Victorian London, featuring a pipe-smoking lady detective who investigates the kidnapping of a strange child who may be a mermaid with the help of her 7-foot tall maid and the ghost of a boxer – it sounds so intriguing that I had to pick it up. Unfortunately, the story doesn’t quite deliver. The characters are interesting but they never grow or evolve, there is a massive coincidence (mild spoiler: the investigation causes the main character to cross paths with some unsavory people from her past) but it’s just a coincidence and has no impact on the plot, and the writing tries really hard to be all Dickensian and ornate but just ends up overwrought. Disappointing. 2/5

The Magic of Reality by Richard Dawkins:

I admit, I picked this book up because it’s illustrated by Dave McKean (a long-time collaborator of Neil Gaiman, who illustrated some of his books like “The Graveyard Book” and “Coraline”, did the covers for “Sandman”, and also directed “MirrorMask”) and also because the title sounds kind of interesting. The book turns out to be a very basic introduction to science – good for someone not knowing anything about science (although it’s not exactly a kid’s book), but the information is definitely not new. But it’s not the book’s fault; it’s my fault for judging a book by its cover (and illustrations.) The illustrations are pretty though, which is why I gave this 3/5.

So what did you read?