The main focus of our trip to Murmansk, and indeed to Russia, is, of course, the Aurora hunt. Our Airbnb host runs an Aurora hunting tour on the side, so we booked with him for three nights (for $65/person/night, it’s about $20 cheaper than other tour offers we’d seen.) At 9 PM the first night, we, along with a few other guests, got picked up by our host at a meeting point and then driven outside of the city. We were anxious because the forecast wasn’t promising – it’s a low-activity year of the solar cycle, so the KP Index (a scale of 0 – 9 that indicates the likelihood of Aurora) was low.

When the car stopped and the host said, “There’s the Aurora,” we all gawped at the sky and went “Where? Where?” like a bunch of idiots. That was when I learned the truth about the Aurora – most of the time, and especially when the KP Index is low, it’s not as bright as in those photos you see online. To our untrained eyes, it just looked like clouds. By the time I set up my tripod and took a few snaps, the Aurora had moved on. We drove around some more, but it didn’t reappear. 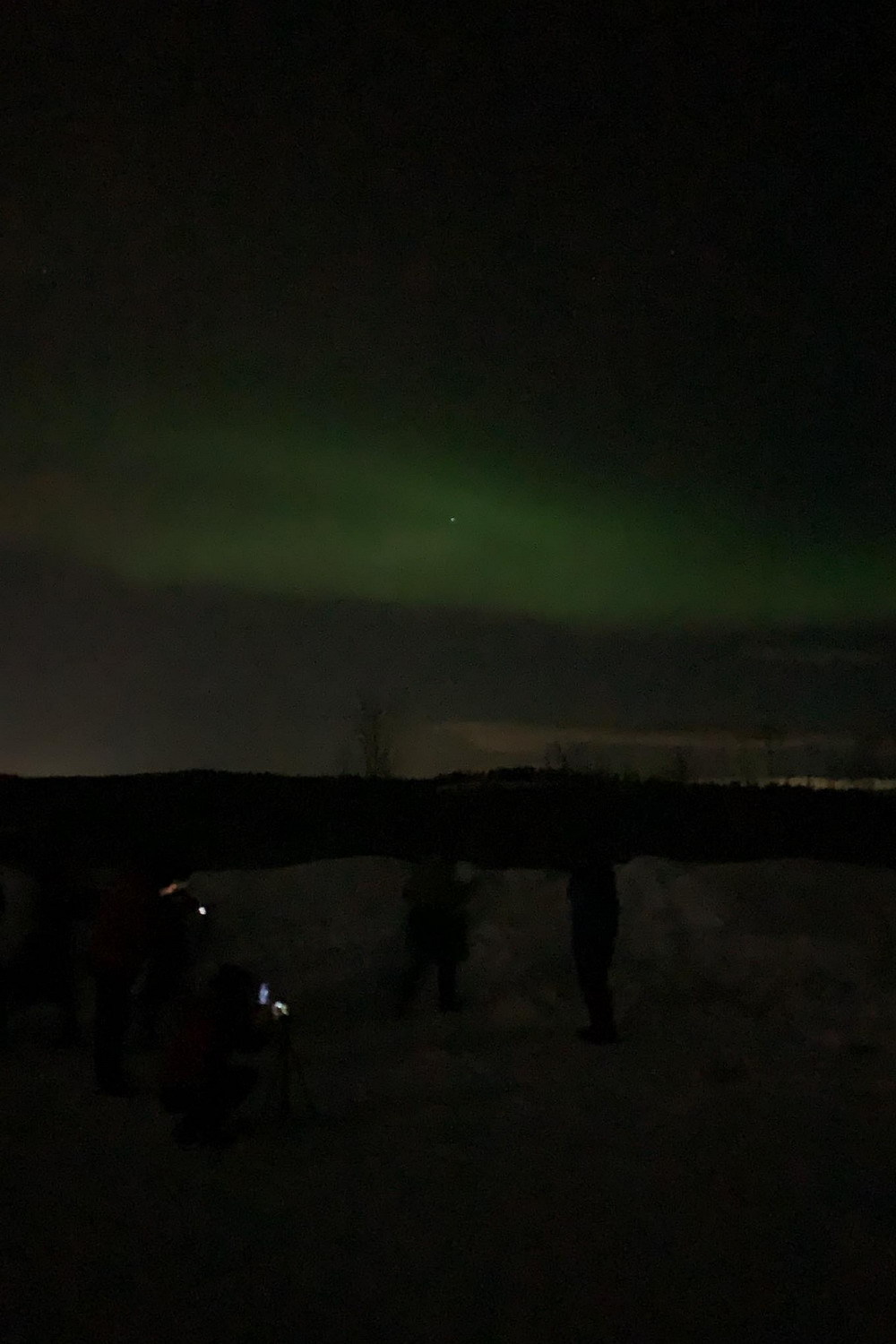 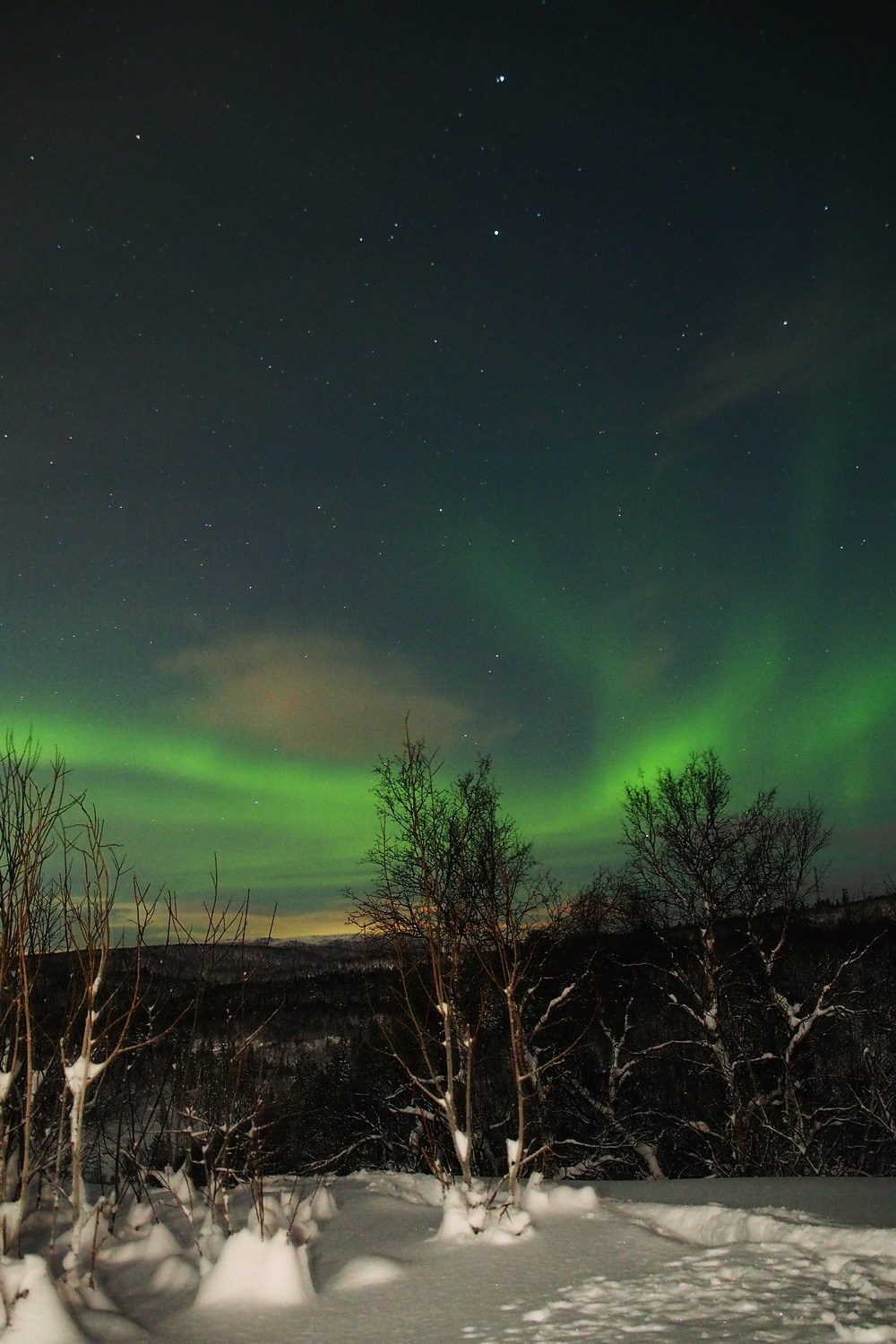 What we saw vs. what the camera saw

We all felt a little anticlimactic, so the host took us to a viewpoint to see the city lights of Murmansk. The lights are pretty, but it was the walk there that stayed with me. Imagine this: walking uphill through the snow, in the dark, when you’re sleepy and disoriented, and suddenly you see a bunch of fighter planes rising out of the snow like a row of eerie sentinels (later, I learned that it’s the Monument to the Soldiers of the 1st Air Defense Bulk. It looks a lot less ominous during the day.) 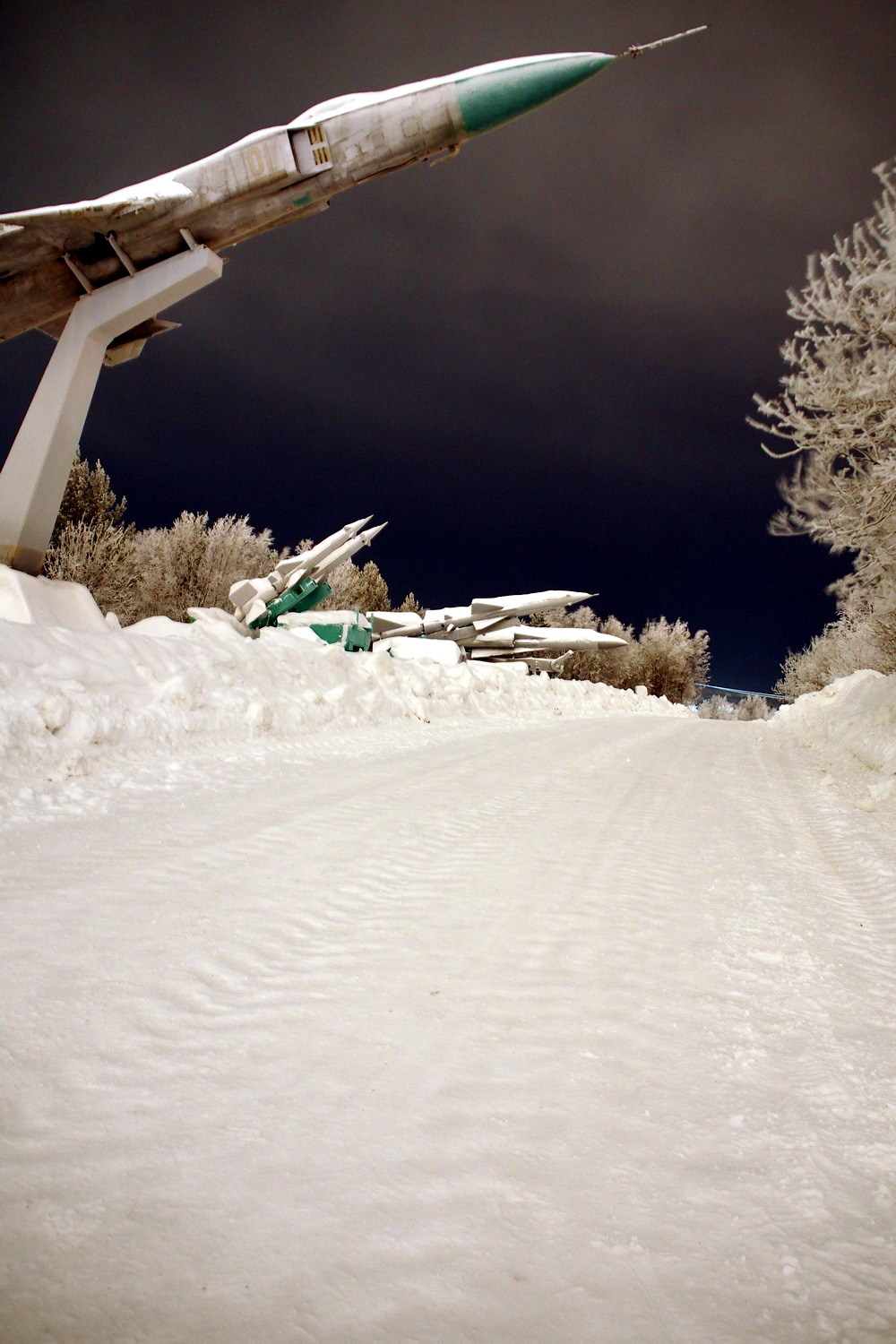 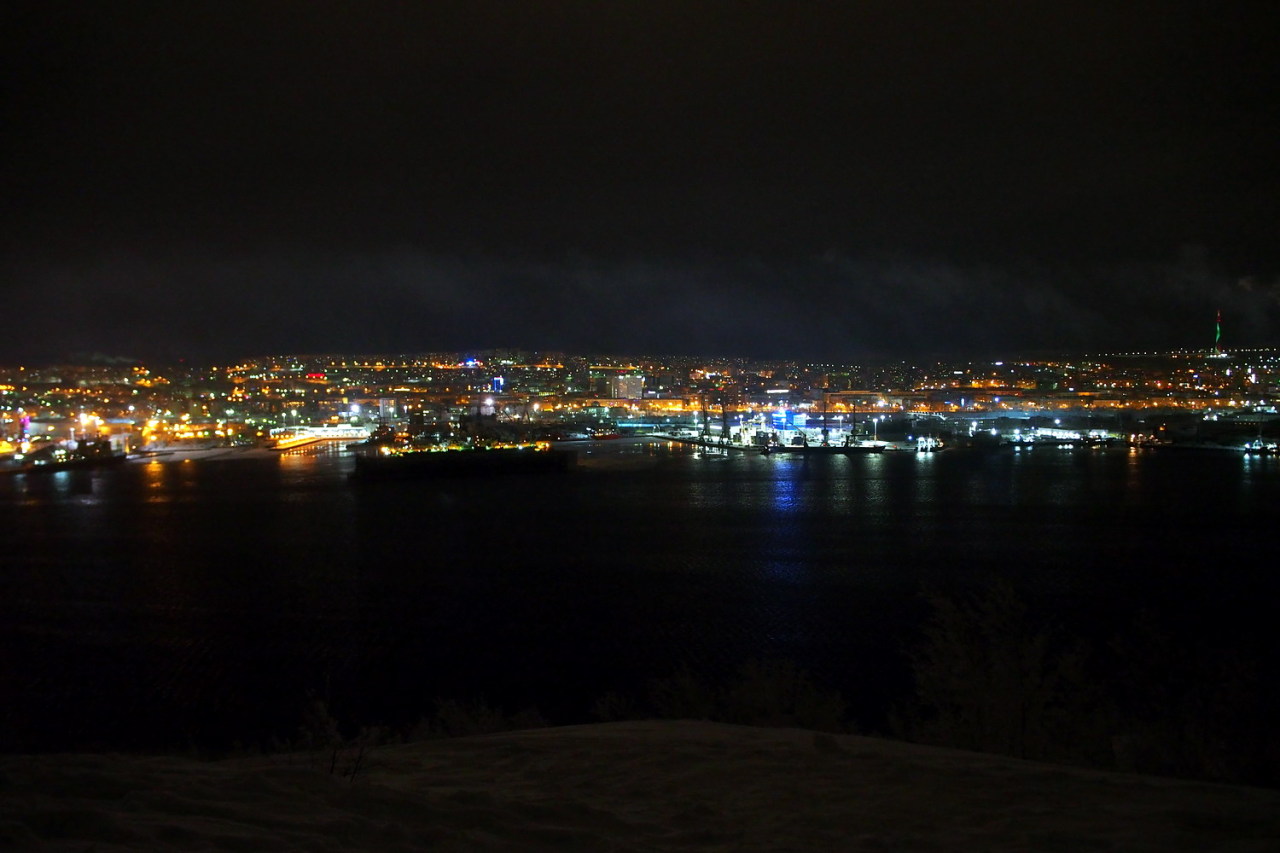 The lights of Murmansk

It snowed all day the next day and only stopped around 11 PM, so we didn’t set out until midnight. The sky was beautifully clear and I managed to take some great photos, but it was so cold (-25 degrees Celsius) and the Aurora is nowhere in sight. 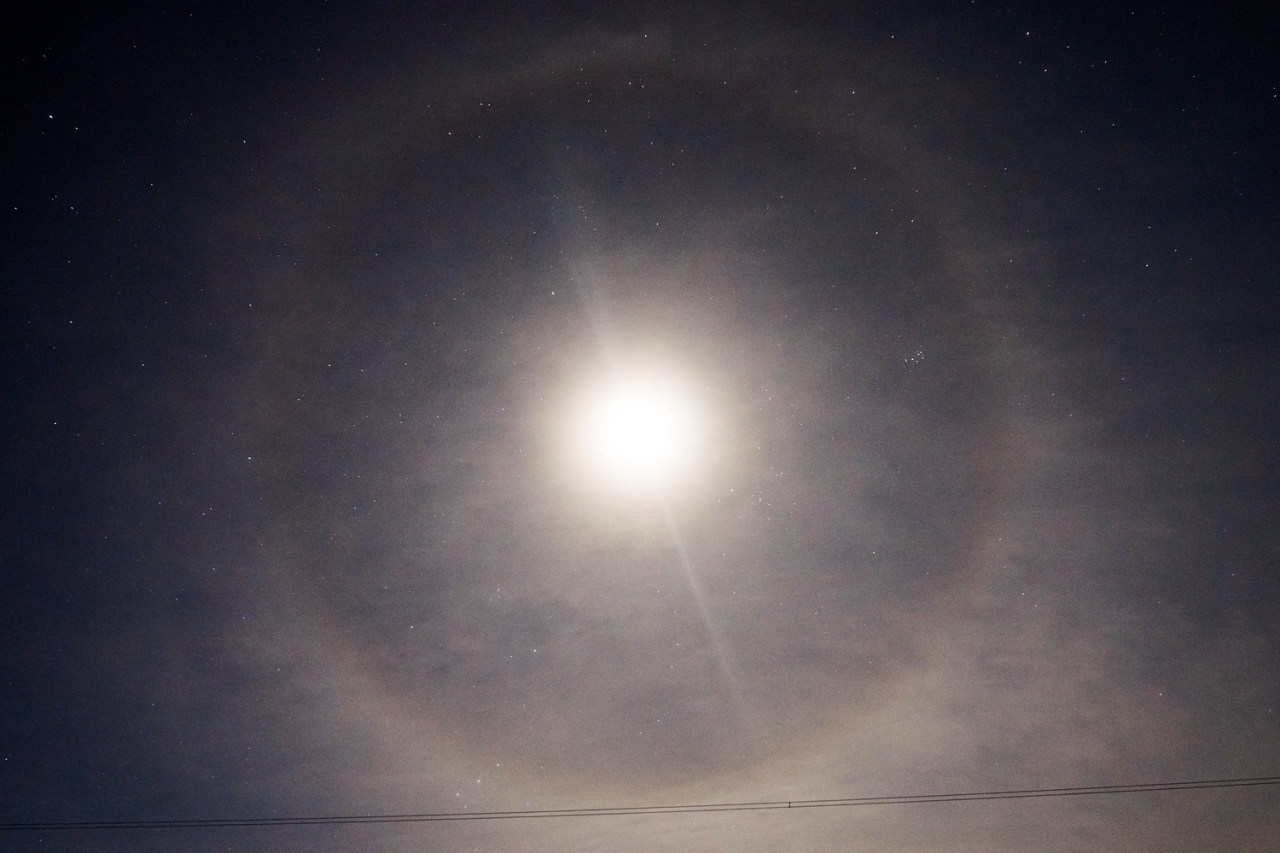 The sky was so clear we even saw a moon ring

When the host finally pointed out a smidgen of light in the distance, we were all amazed – how did he even see that?! 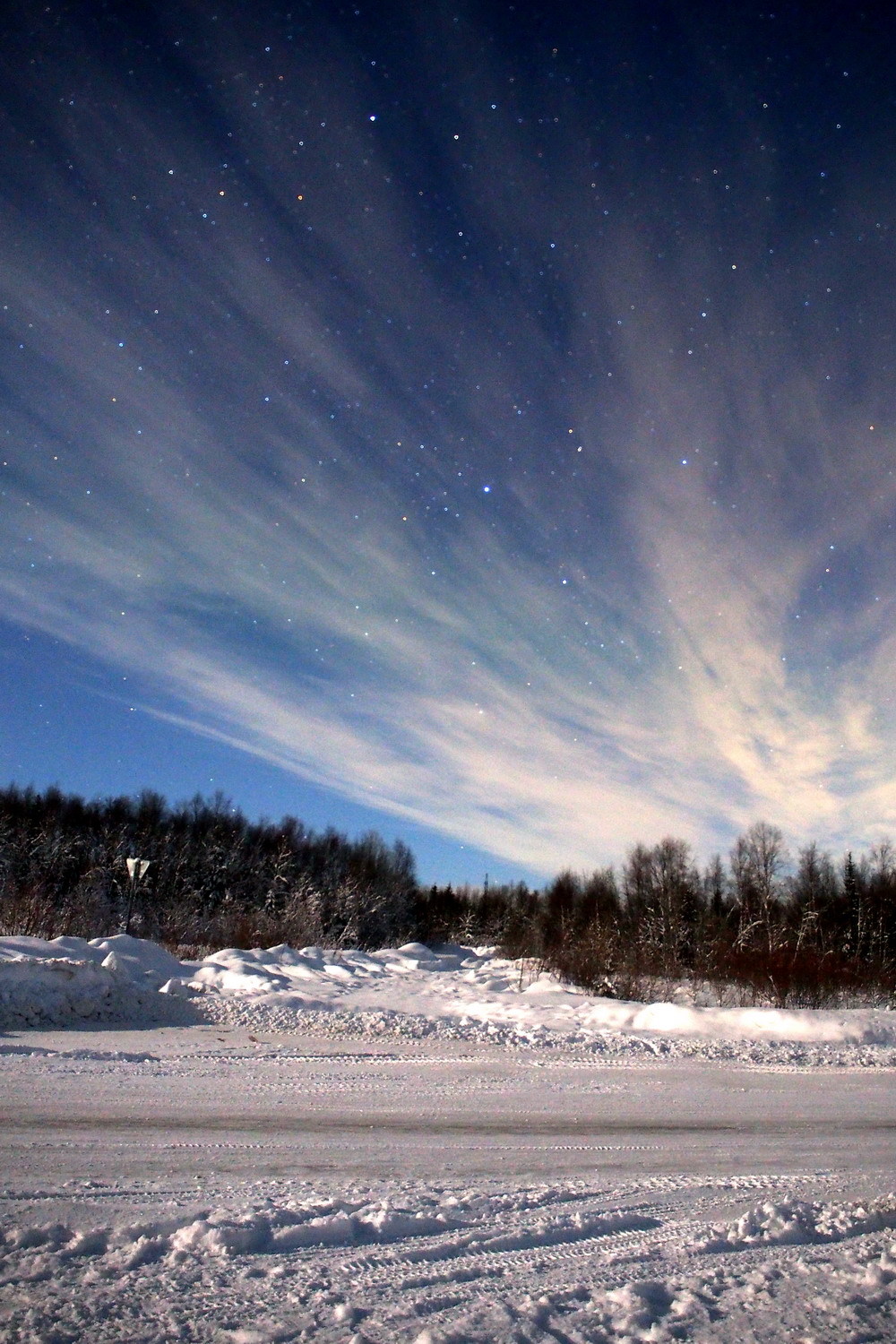 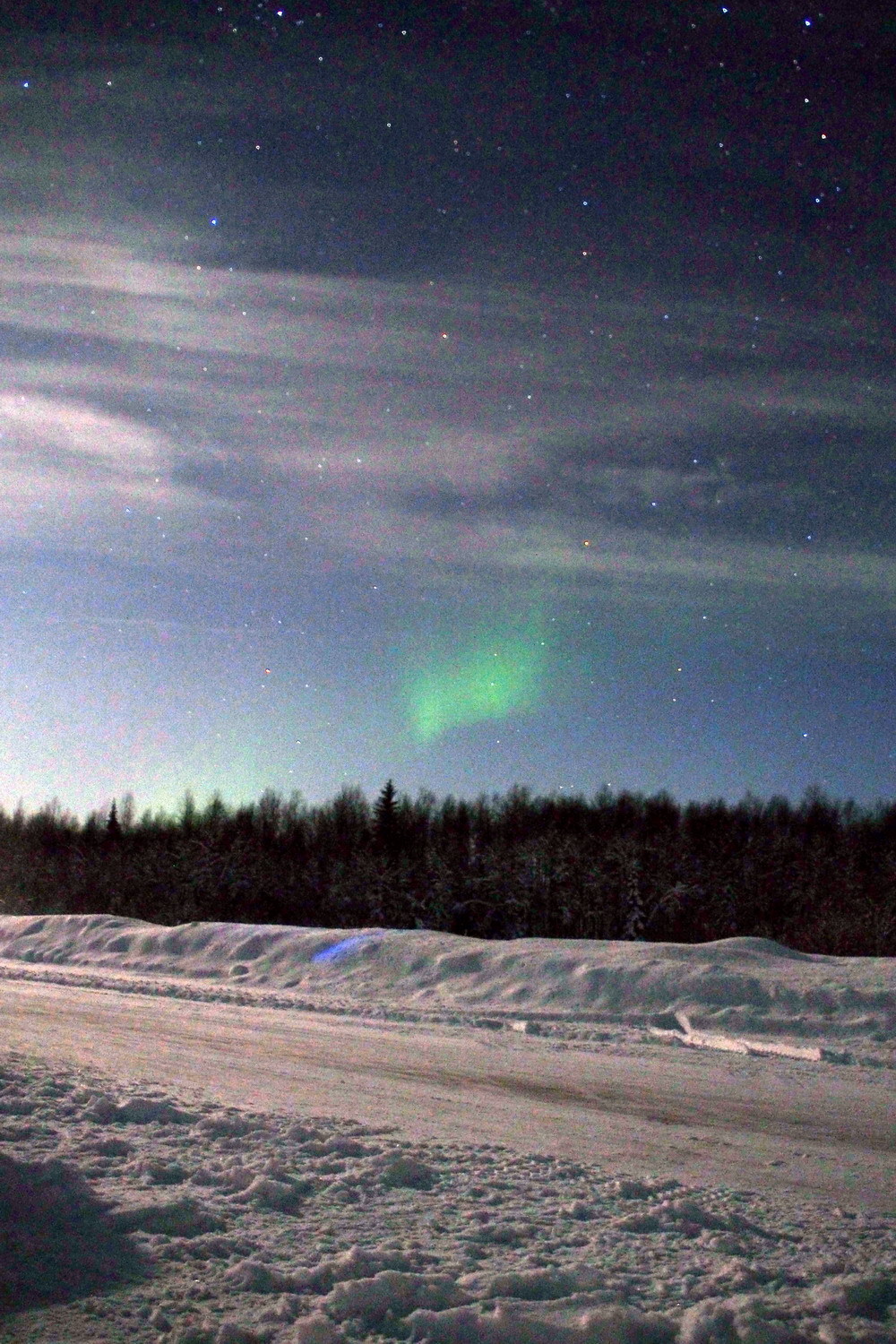 And remember, it was much, much fainter in person

Since that didn’t really count as catching the Aurora, the host offered us a discount for the next night – also our last night in Murmansk. This was our last chance. And it didn’t look good. Again, the sky was clear, but as we kept driving around and waiting, driving and waiting, there was no sign of the Aurora. We began to resign ourselves to the fact that maybe luck wasn’t on our side. 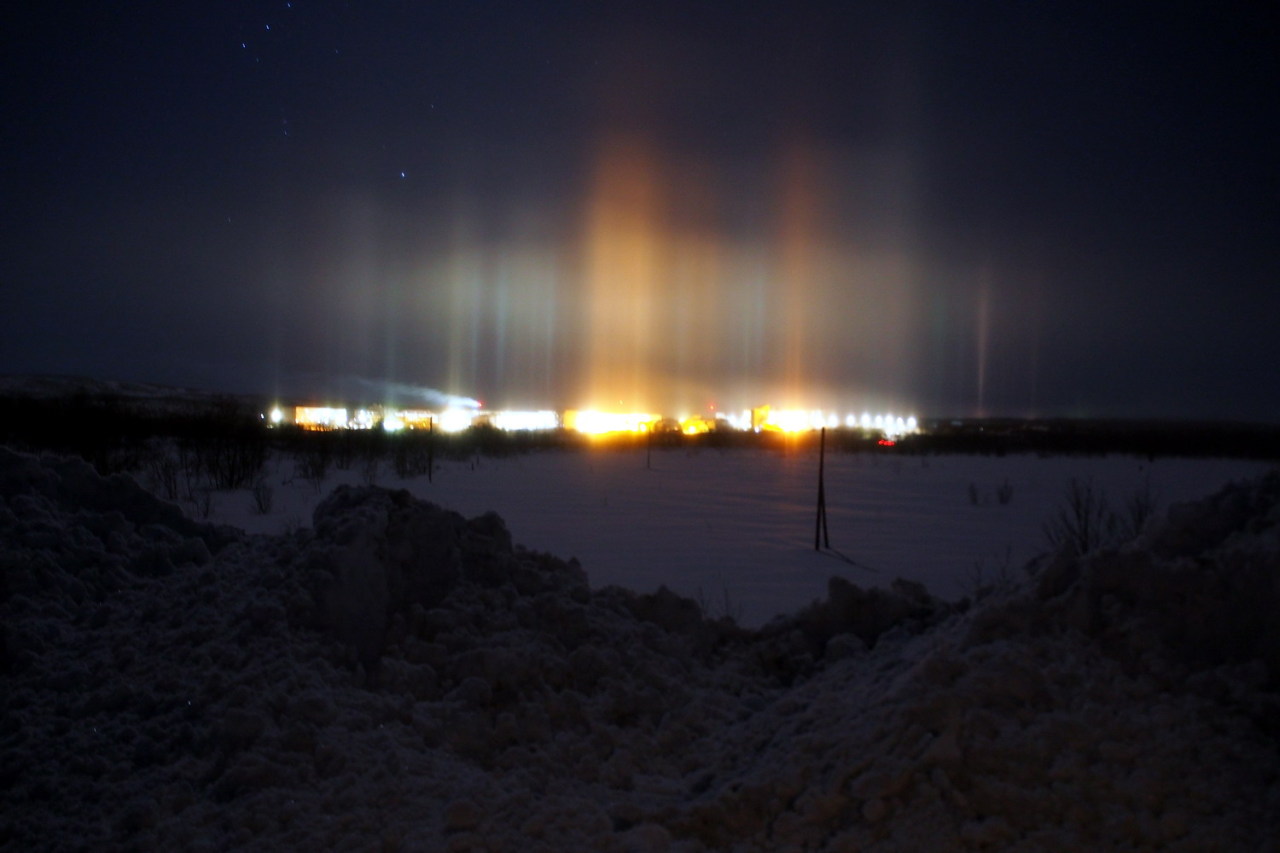 The light pillars (light reflected from ice crystals in the air) were cool, but the Aurora would be nicer

However, just as we were settling down to warm up with some tea and fruit pies (which the host supplied every night), the host burst into the car, saying, “It’s starting!” Throwing the tea down, we scrambled outside and there it was – a streak of green in the distance. It still wasn’t as bright as we’d hoped, but there was no mistaking it for clouds this time. I don’t know if it was because our eyes were more used to seeing it or because it was actually brighter. We could actually see it moving around, undulating and shifting like a ribbon in the sky. Our extremities were all freezing, but we must’ve stood around for nearly half an hour, just looking at it. 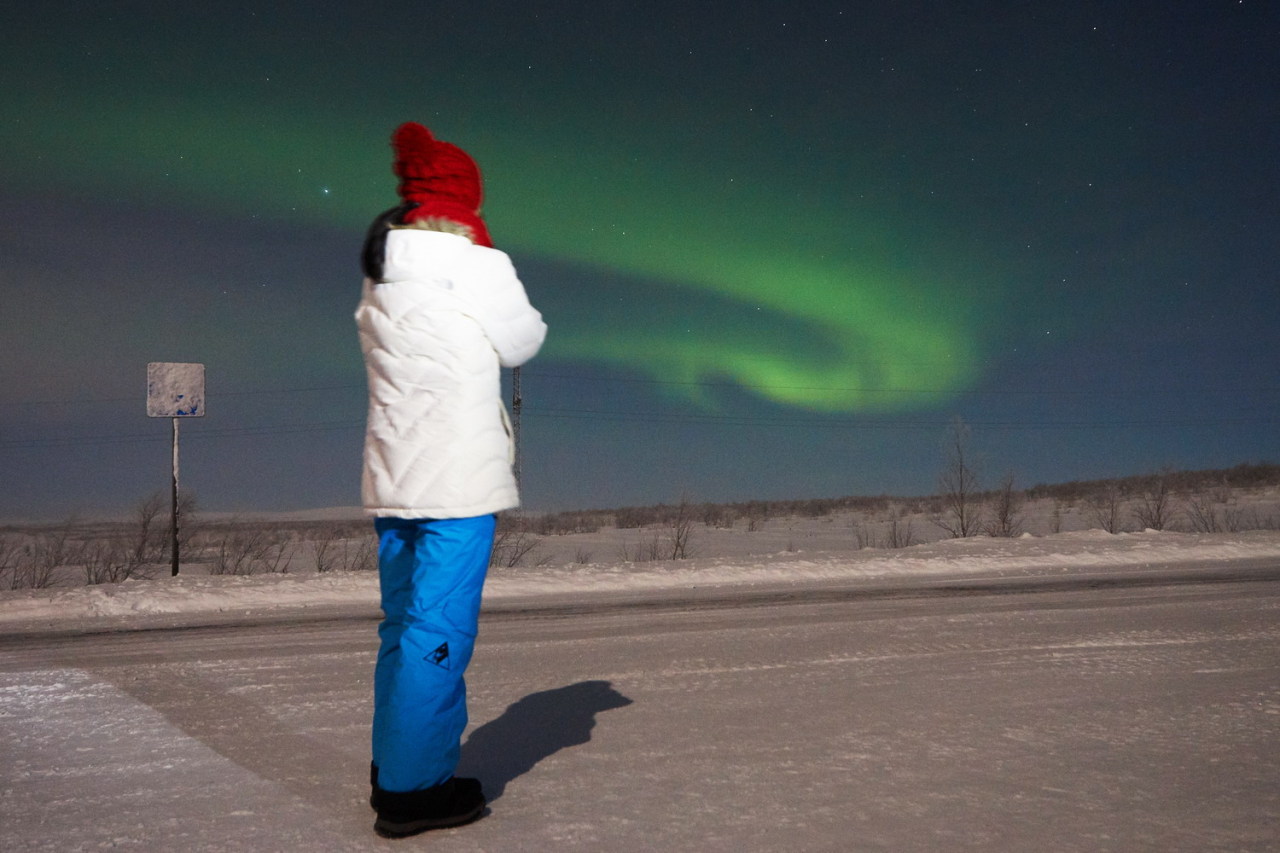 I didn’t even turn around for the photo because I didn’t want to take my eyes off it! 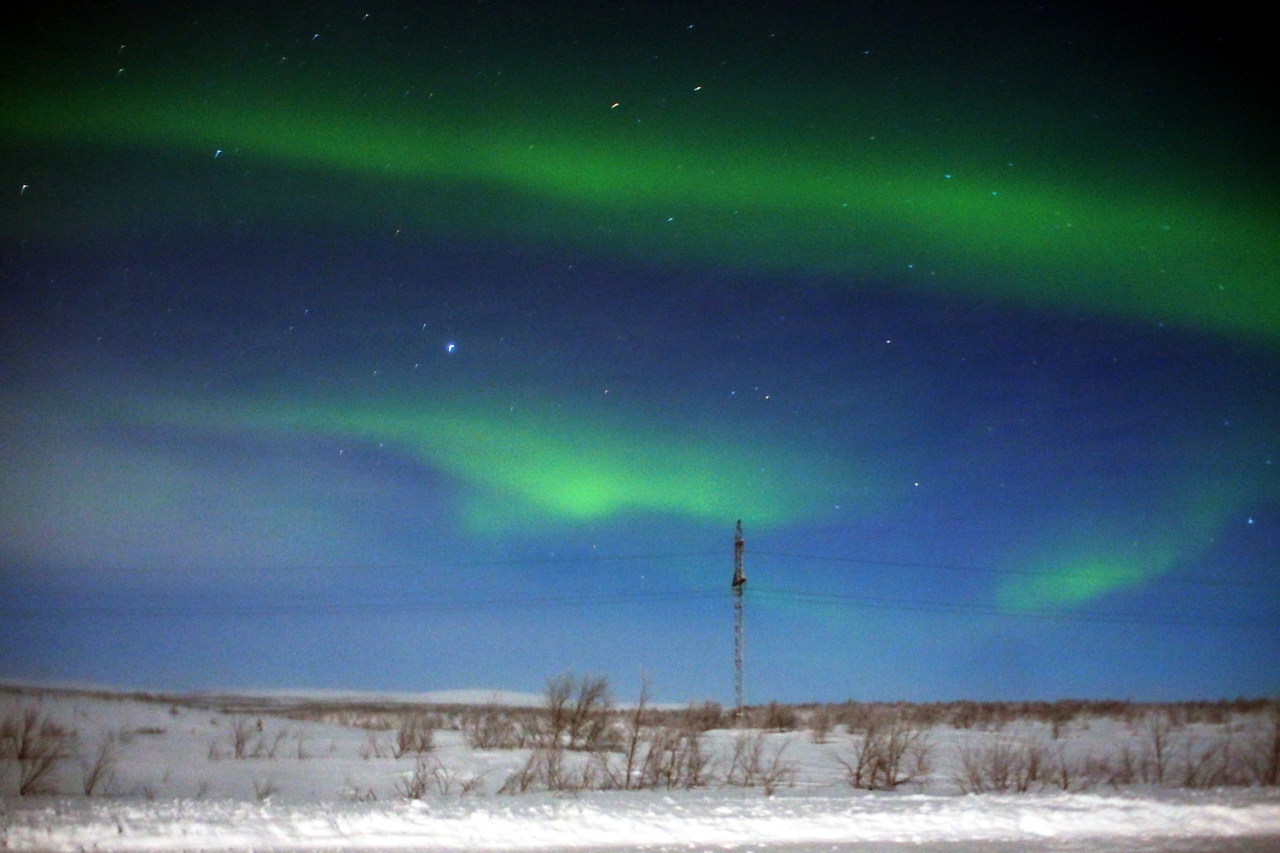 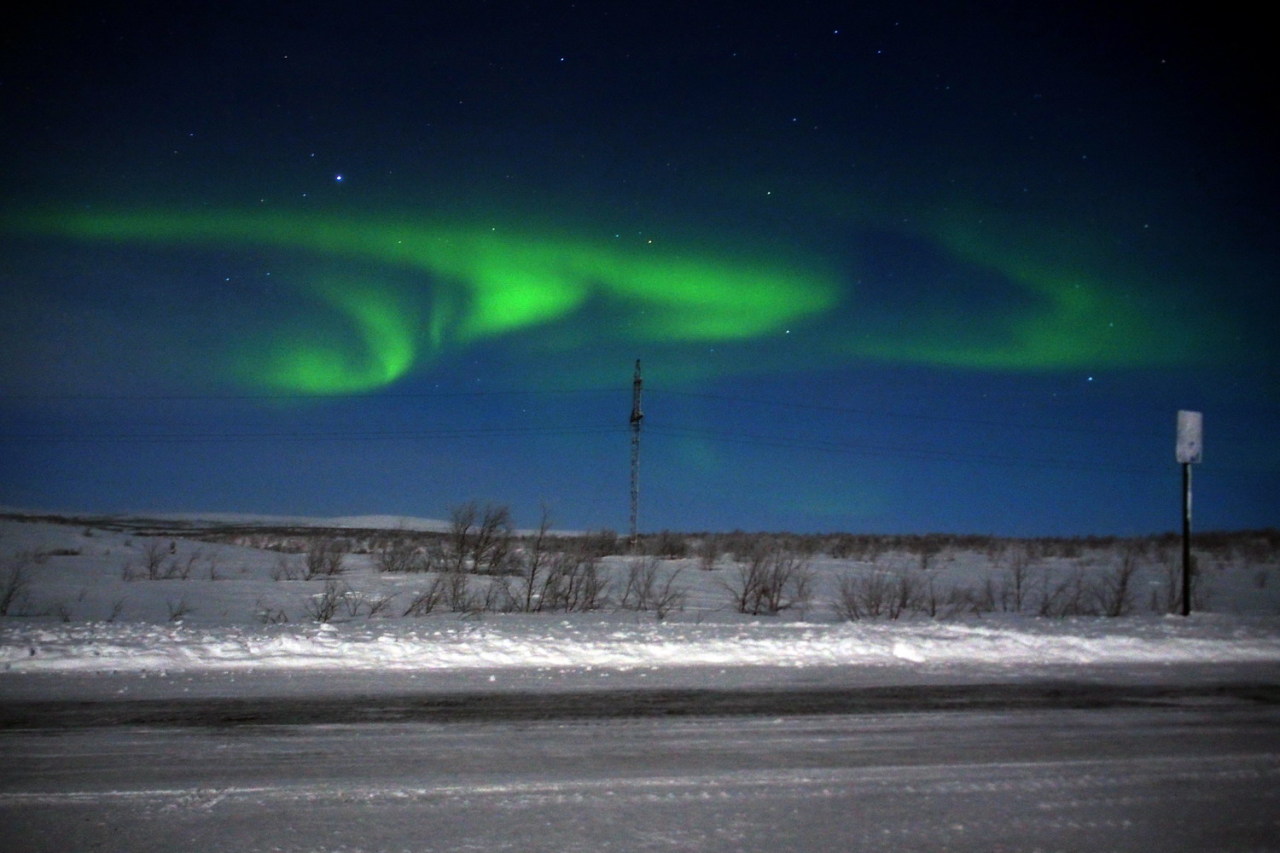 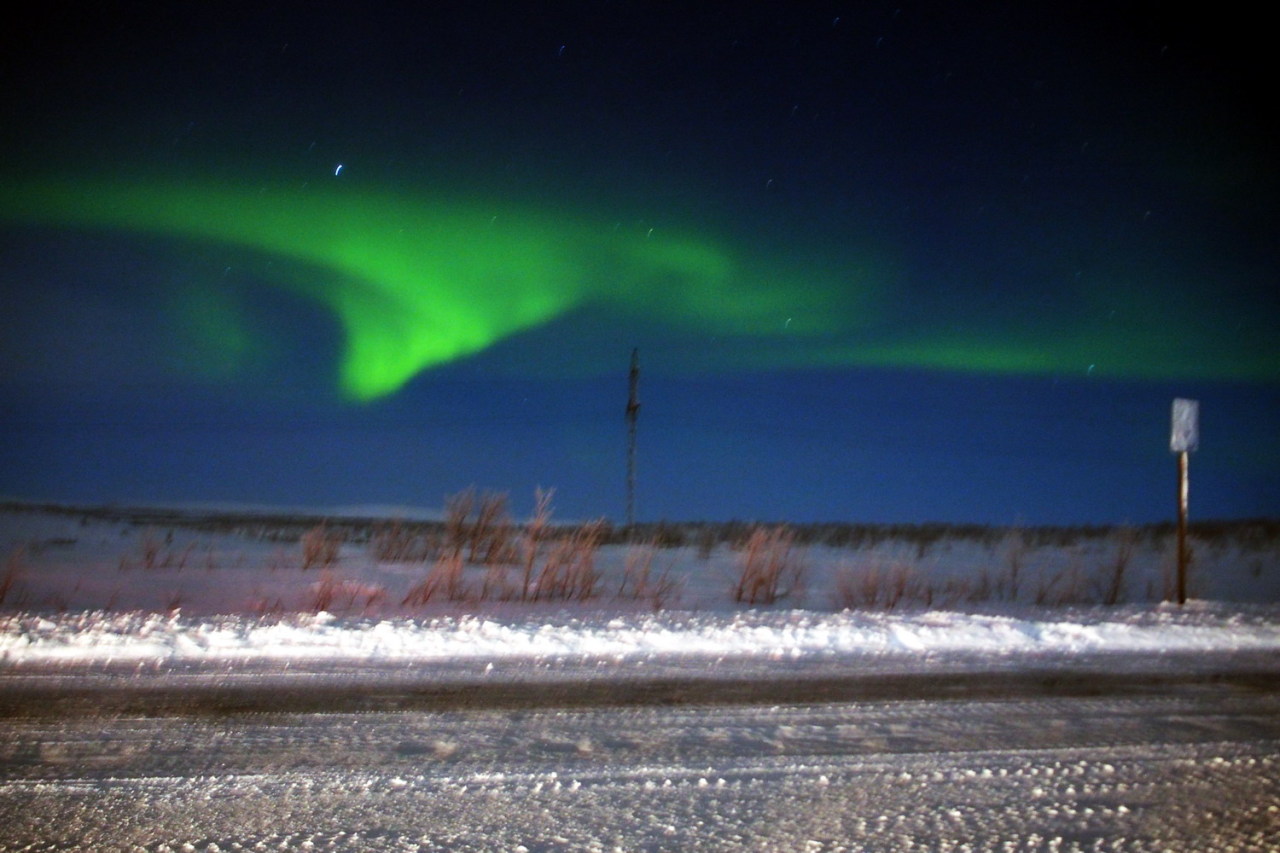 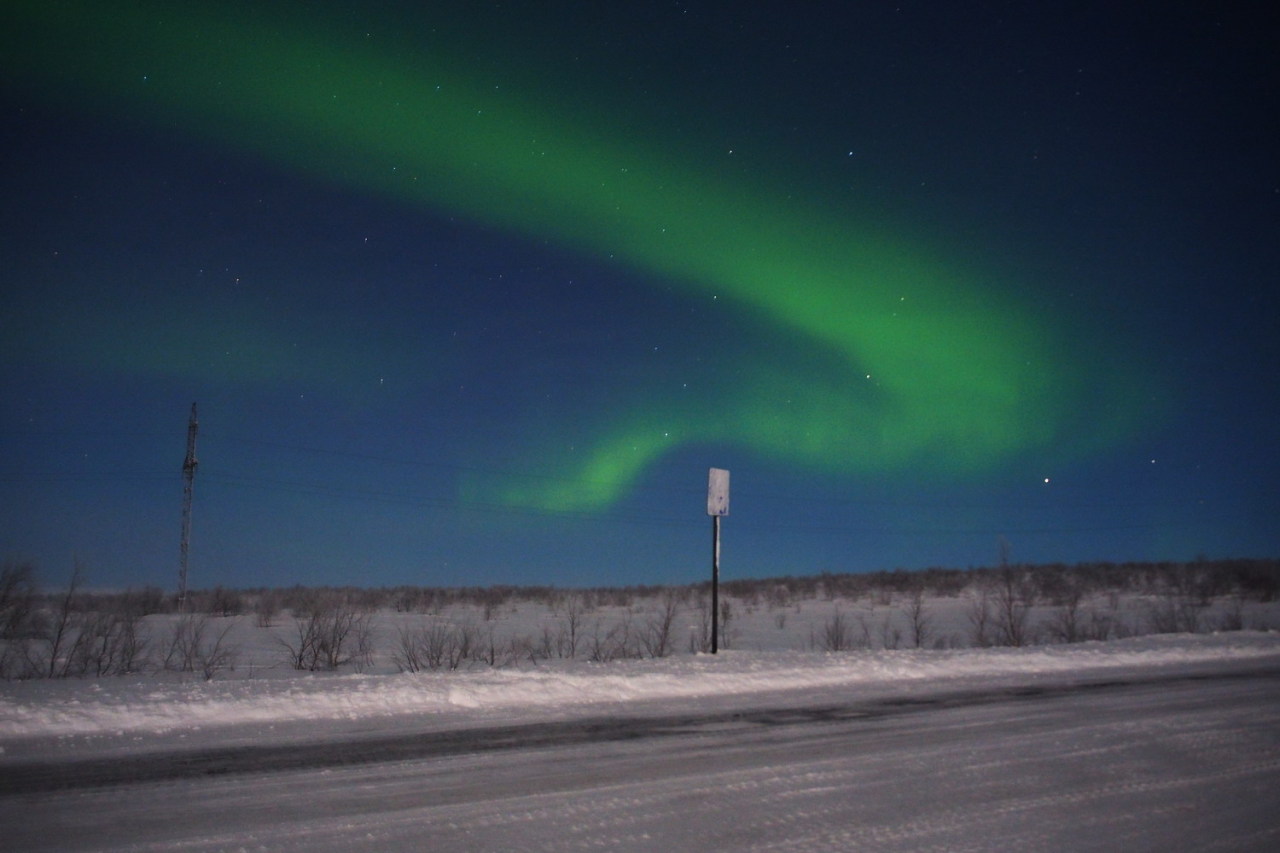 Finally, after 3 nights of driving and standing around in the freezing cold, we were rewarded with the beautiful, memorable sight of the Aurora. There’s a reason it’s called a “hunt” and a “chase” – it was tough, but when we got the result, it was all worth it. 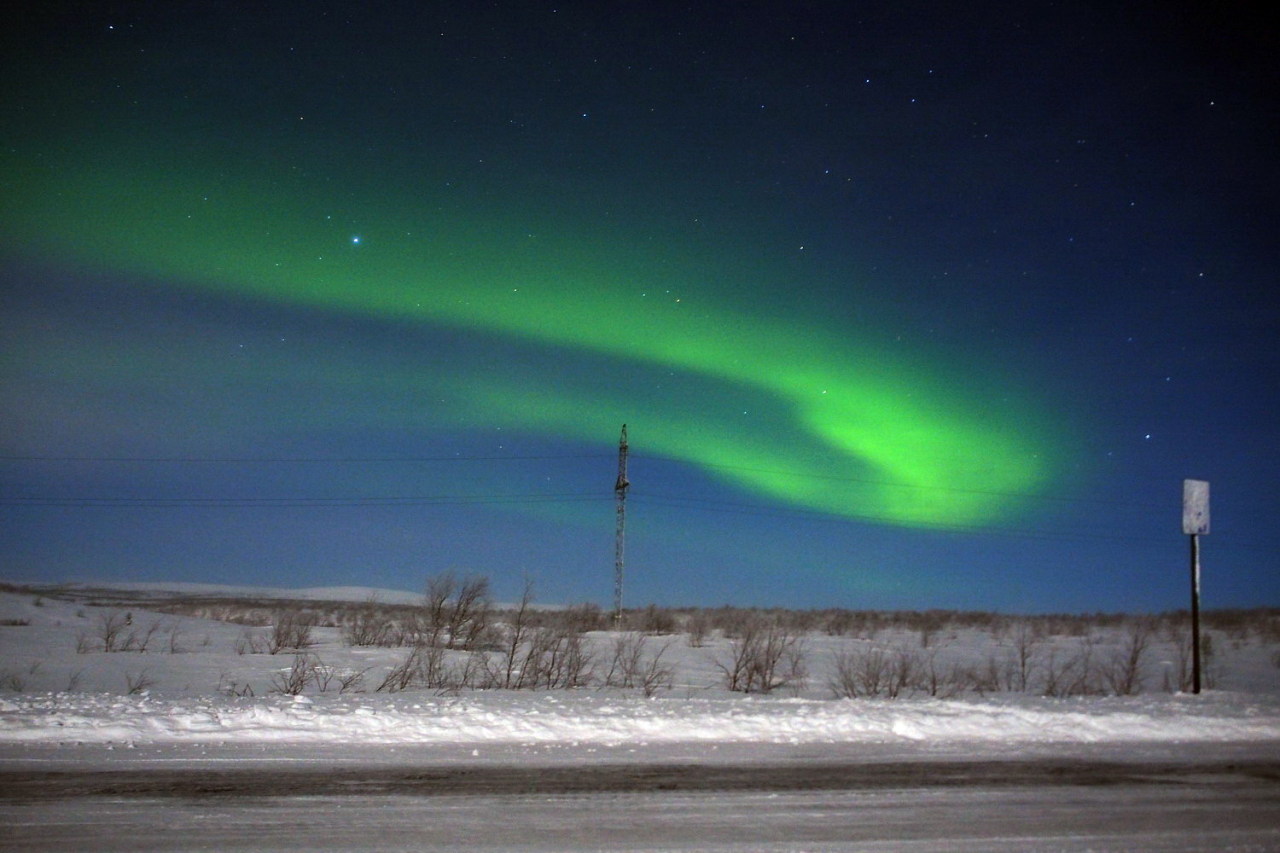