This trip came about in a rather roundabout way. See, my friends and I had the idea of going on a trip to hunt for the Aurora Borealis – the Northern Lights. However, when we looked at usual Aurora destinations, like Iceland and Scandinavia, they’re all expensive, and other than Aurora hunting and winter sports, there isn’t much to do there (and I’ve been to Iceland already.)

Then, during our searches, we stumbled upon Murmansk, a Russian city in the Arctic Circle that is growing in popularity as a destination for Aurora hunting due to its cheap prices and close proximity to big cities (it’s only a 2-hour flight away from Moscow). So I thought, why not go to Russia? Even if we didn’t see the Aurora, there would still be tons of things to do and see and we would still have a memorable trip nevertheless.

The idea of traveling to Russia in the depth of winter was a little daunting at first. The funny thing is, this is Russia’s warmest winter since 1886 (!!!), so we didn’t get a lot of snow. For us tropical dwellers though, their warmest is still pretty effing cold, but we got through it, and I’m glad we did, because I feel we got a more authentic experience. Lower prices and fewer crowds are always a plus too. 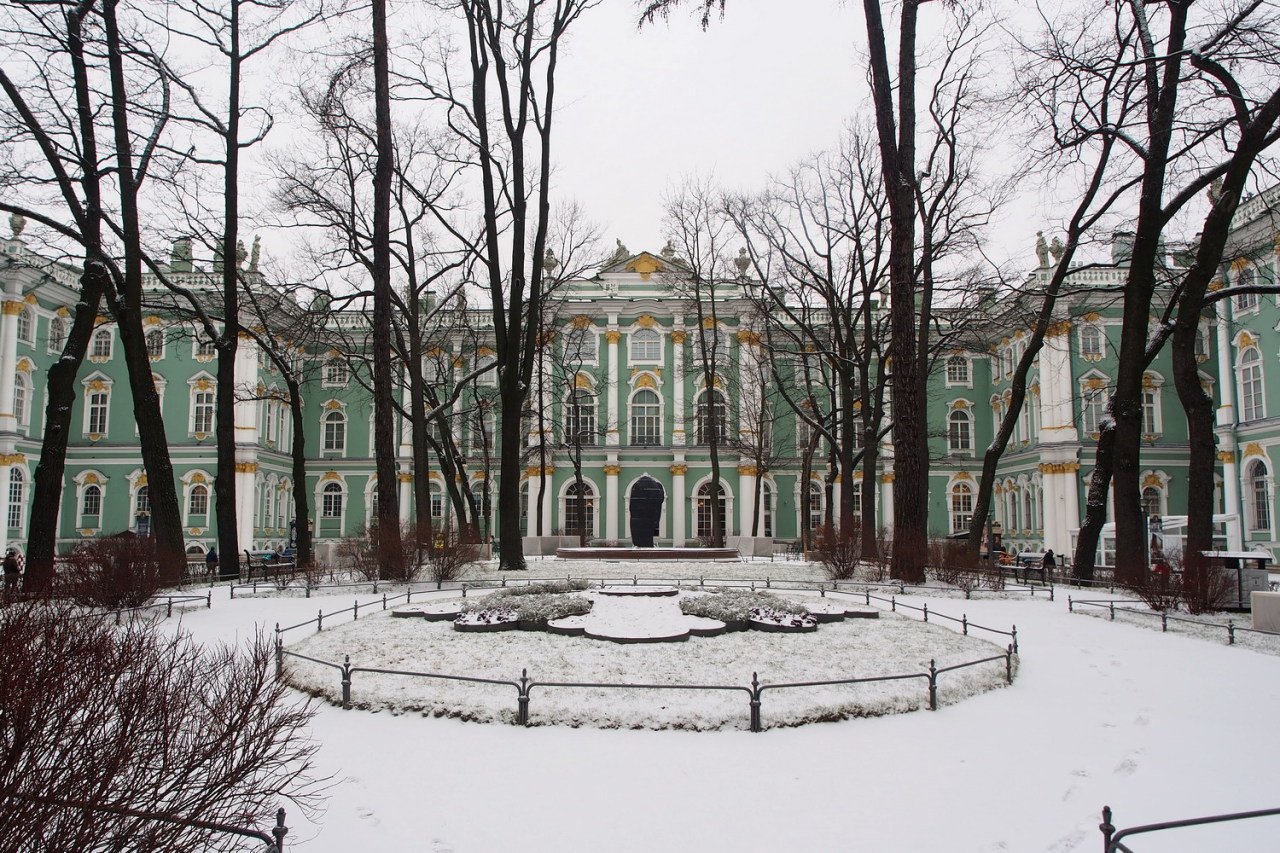 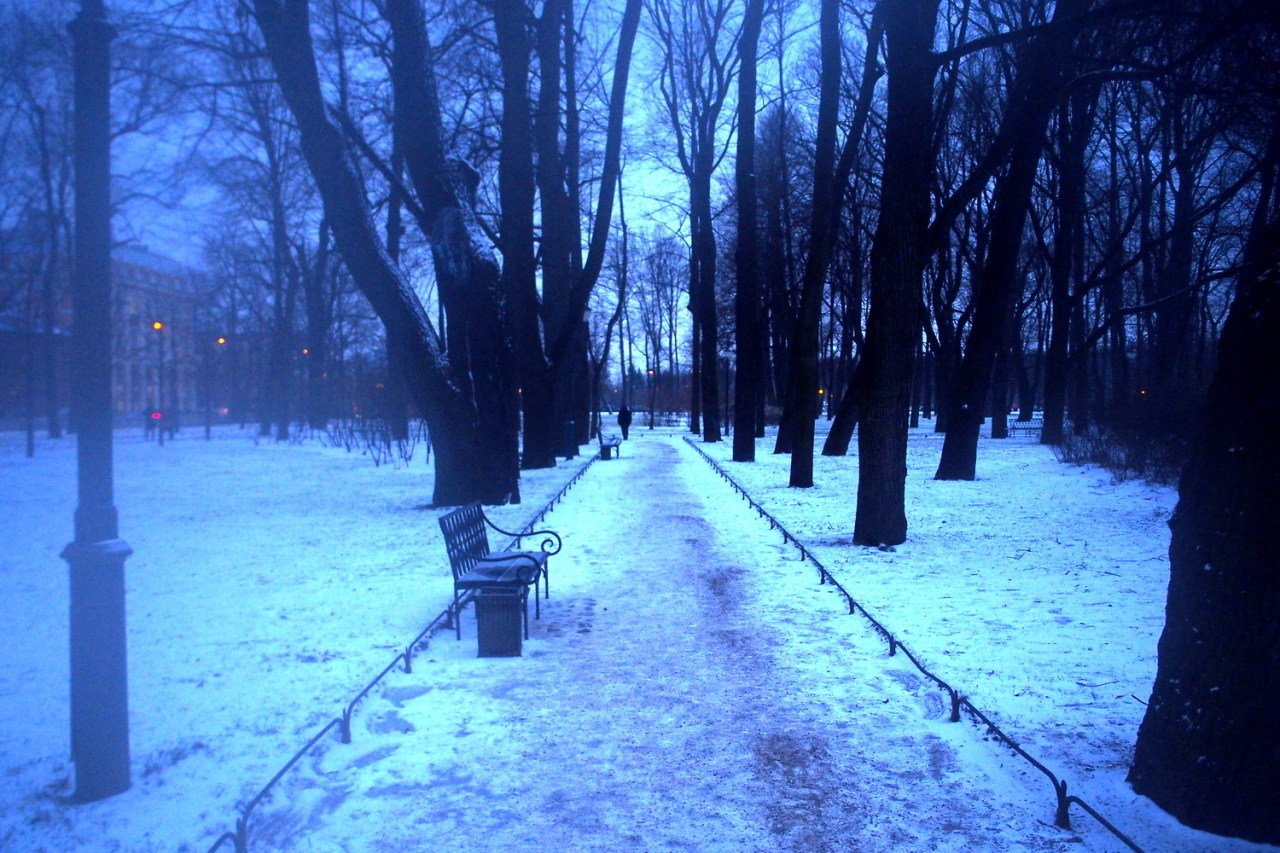 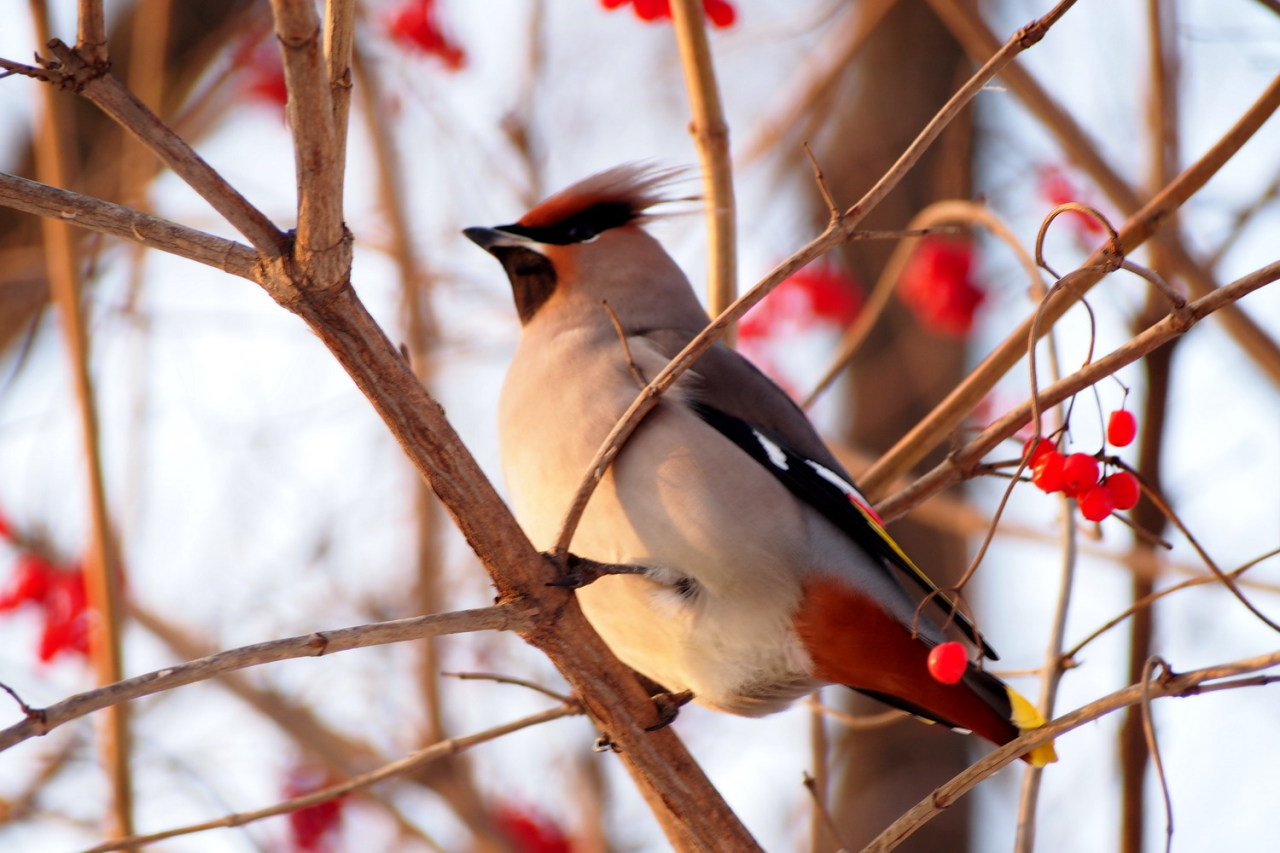 Since Russia is such a big destination, it took us some planning (the shopping for winter clothes alone took a lot of time, which I’m going to talk about in the packing post.) There is plenty of information on Russia travel out there, but here’s my experience:

– Visa: You probably need a visa to travel to Russia. The application requires a letter of invitation from Russia, which can be provided by a travel agency. We just did everything through an agency. It costs more, but it’s much less hassle.

– Money: We exchanged our money before leaving, but exchange places can easily be found in big cities. Our budget came out to about $50/day (about 3000RUB), but with transport and accommodation, it’s actually closer to $120/day. Russia isn’t that cheap.

– Accommodation: Since there are four of us, we decided that Airbnb would be easier than hostels (also, being old ladies at heart, we’re not keen on hostels anymore.) In Saint Petersburg, most of the attractions are around the town center, so it’s easy to find a place within walking distance. Moscow is more spread out, but the city is linked by an extensive metro network, so it shouldn’t be a problem either. Still, I recommend staying within the inner ring (the main roads of Moscow form a series of rings surrounding the Kremlin) because that’s where most of the restaurants and shops are. The center of Murmansk is tiny and as long as you stay around Lenina Prospekt (Lenin’s Avenue) and the Murmansk Mall, you’ll be fine. 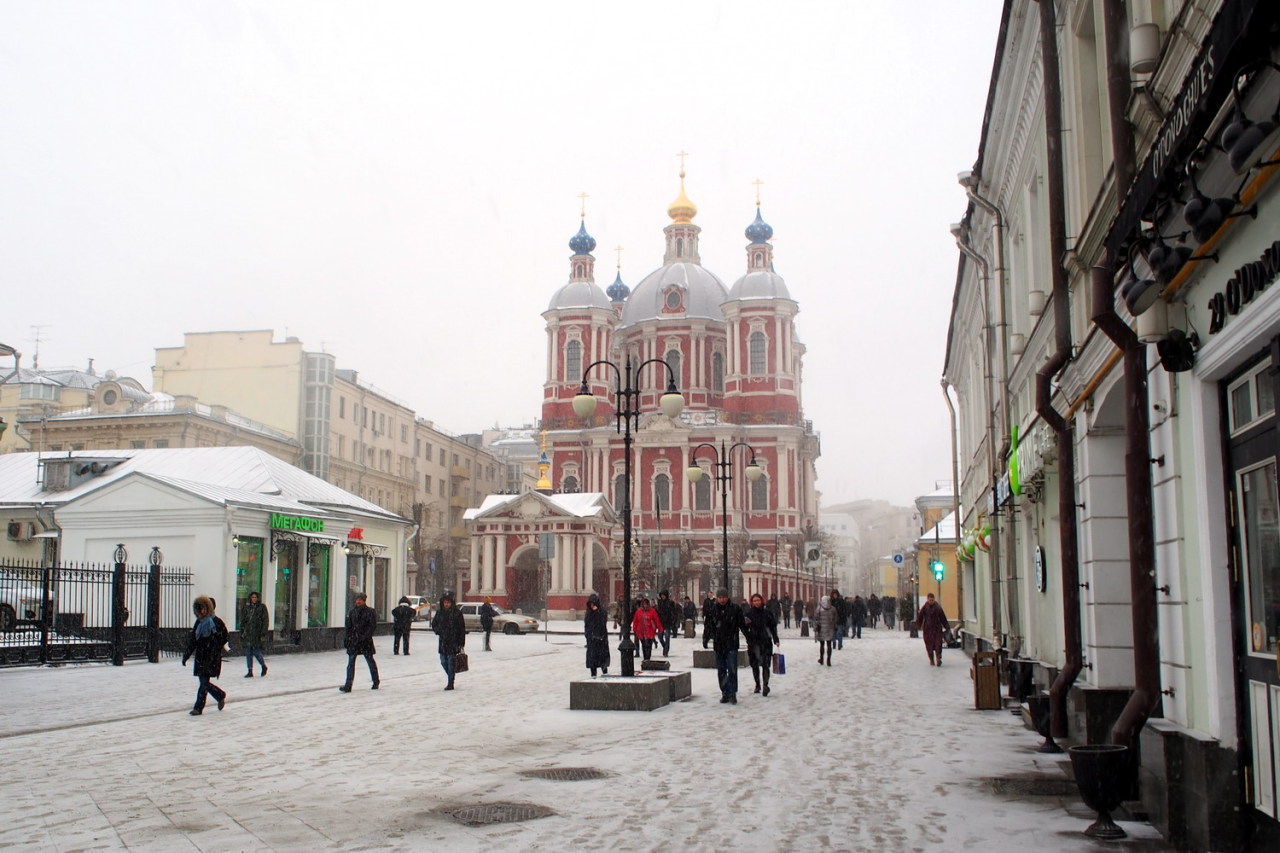 Near our Moscow Airbnb. It’s a pedestrian street lined with restaurants and pubs 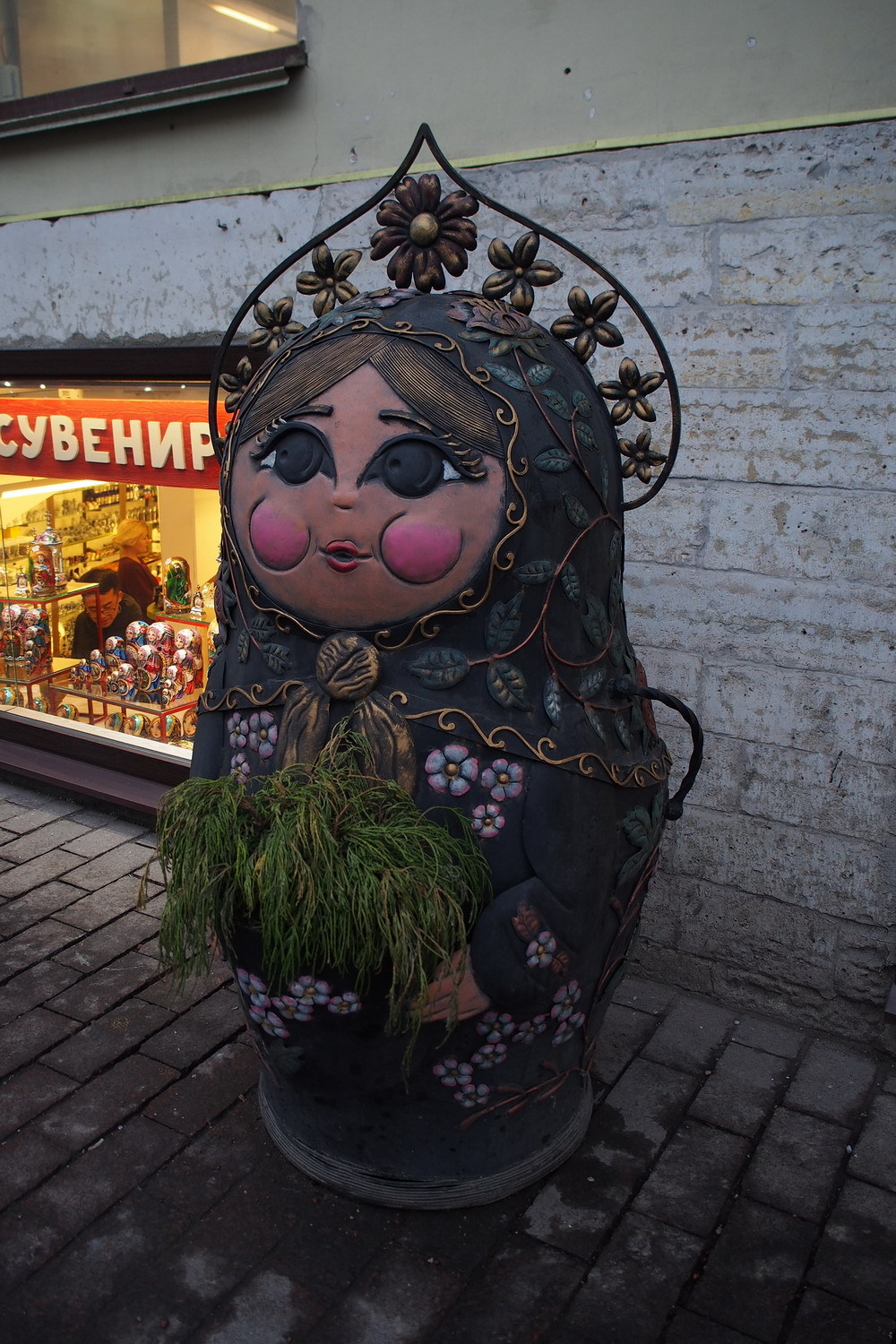 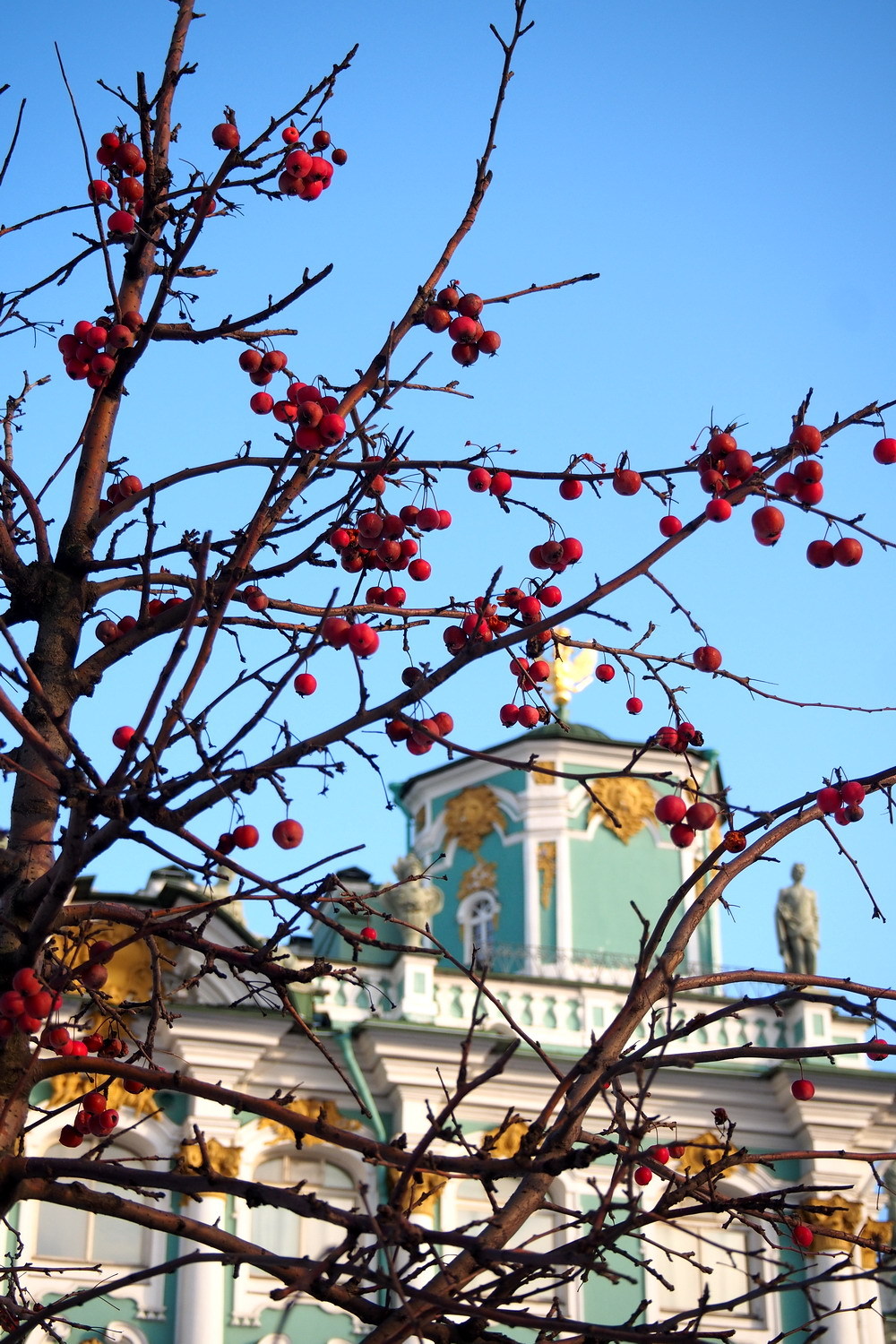 – Getting around: To save time, we traveled in a triangle (Saint Petersburg – Murmansk – Moscow) so we didn’t get to travel on Russia’s legendary railway. Instead, we took domestic flights between cities (we booked on tickets.ru, which has cheaper prices and also shows flights with free checked luggage – important, as we couldn’t travel carry-on only during the winter.) Within the cities themselves, we did a combination of walking, taxi, and public transport (I will talk more about this in my Moscow posts.) The Yandex Taxi app is the Uber equivalent of Russia; it’s much cheaper than traditional taxis and easy to use.

– Food: Luckily, food in Russia is relatively cheap. We ate pretty well, with a mix of fast food (mostly Russian fast food, like Teremok, which specializes in blini), sit-down meals, and home-cooked food. Russian restaurants usually have lunch “sets” – combo of soup/starter + main dish + drink – for 300-500RUB, which is a great deal. There are also cafeteria-style restaurants where you pick and pay for the dish you want. Out of all the traditional dishes I tried in Russia, my favorites are vareniki (dumplings), borscht (beet soup), blini, and honey cake. Also, make sure to keep warm with a lot of tea (not vodka!) 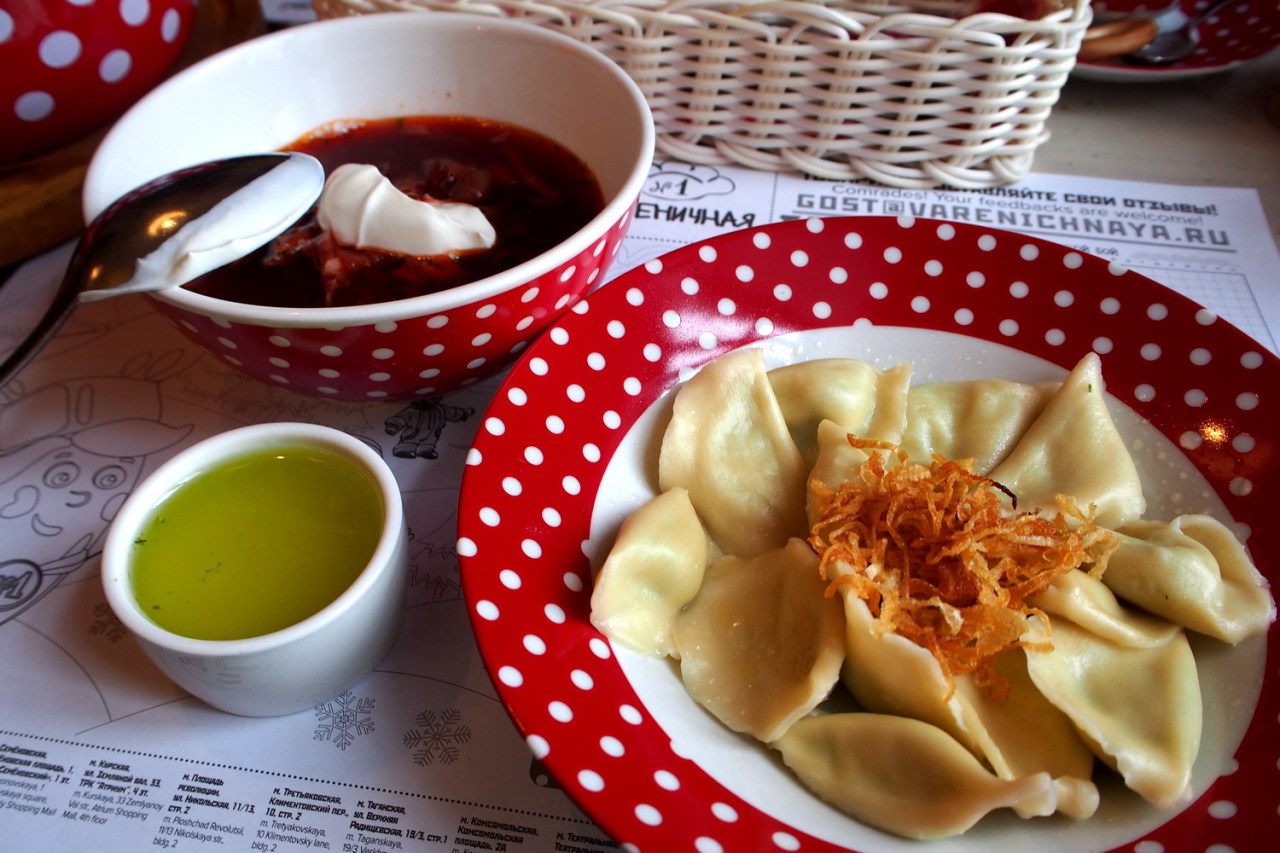 A very Russian lunch with borscht and vareniki 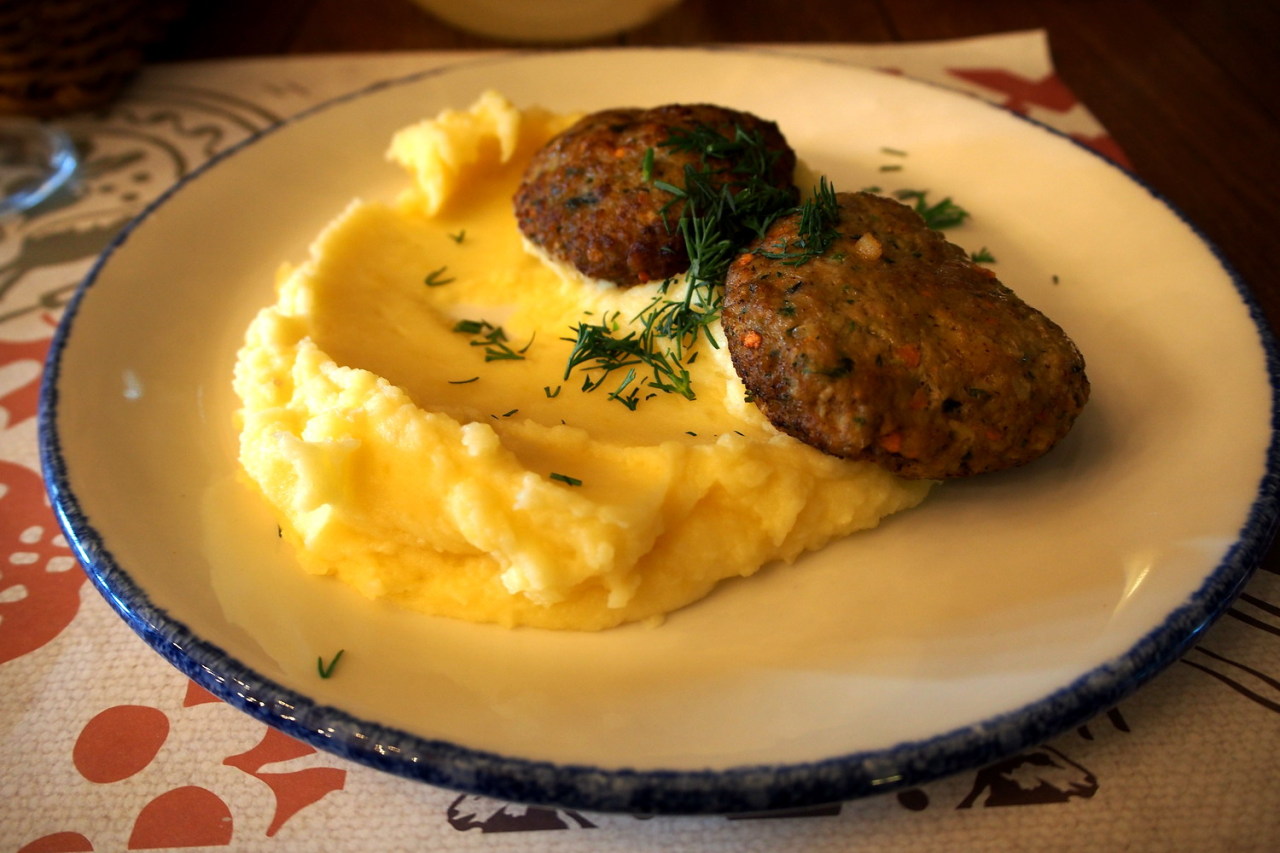 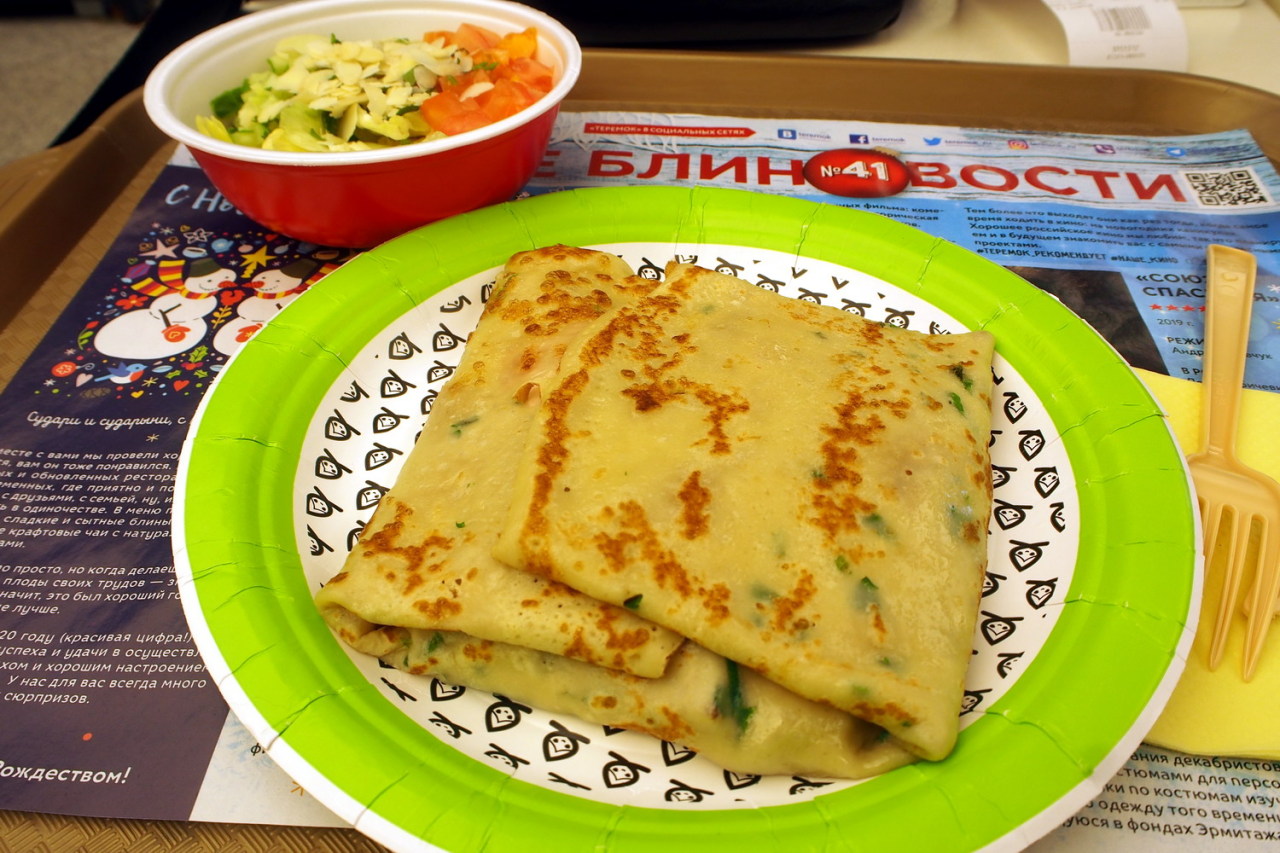 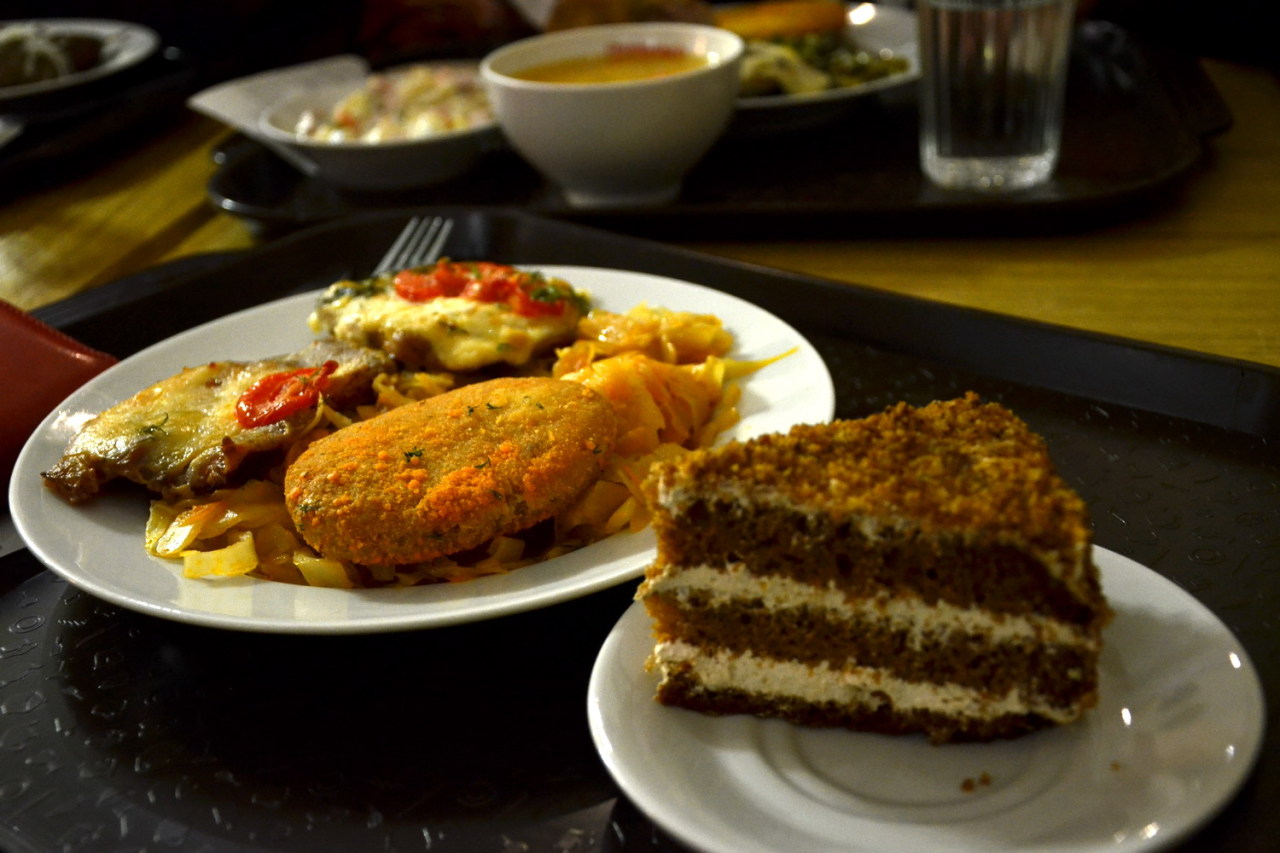 A cafeteria-style meal with a slice of honey cake 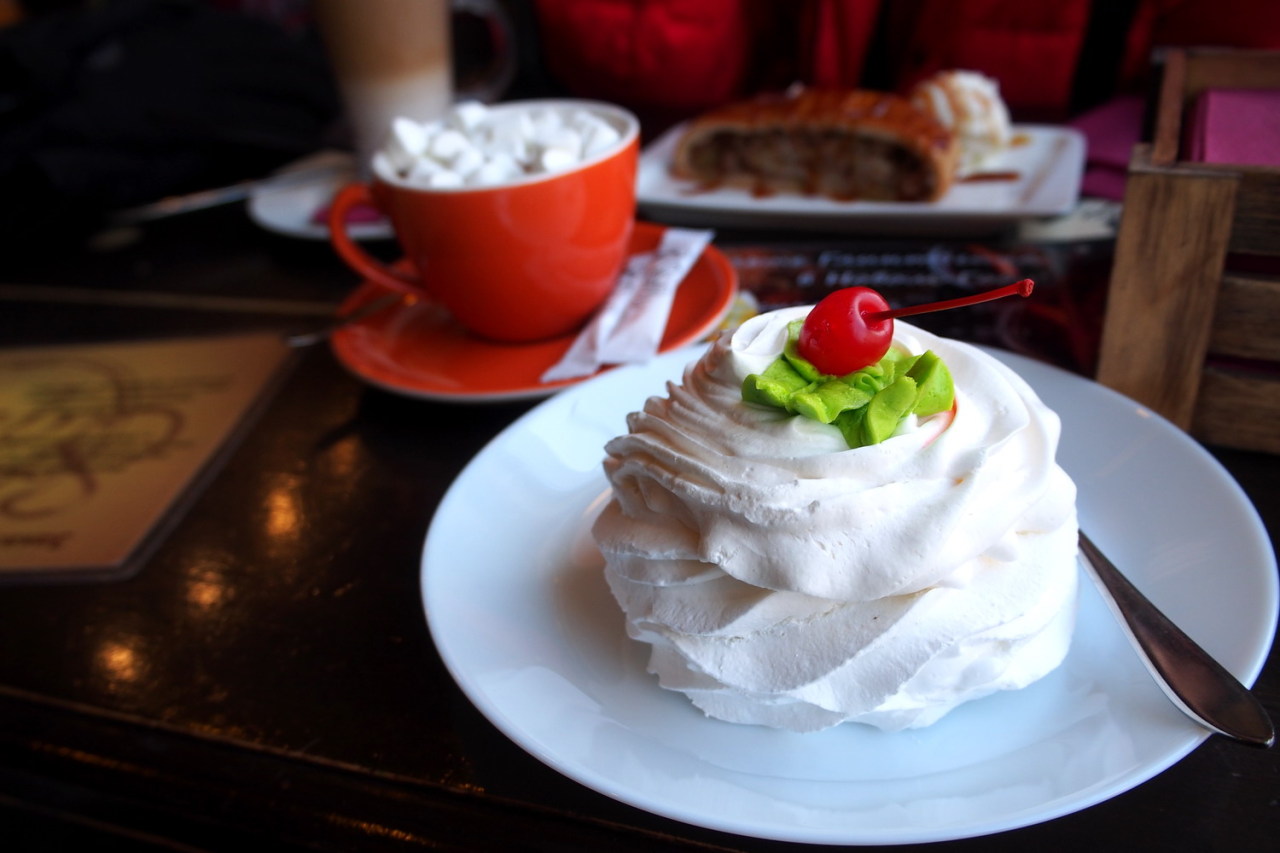 – Language: Other than the Metro, you won’t find a lot of English signs in Russia, so it helps to learn the Russian alphabet (I used a pretty fun app called Russian Cyrillic in 3 Hours). Some words may look totally foreign in Russian, but when you sound them out, you can actually recognize them (for example, “ресторан” is pronounced “res-to-ran”, and yes, it means “restaurant”.) English speakers are rare (in fact, we encountered more English speakers in Murmansk than anywhere else!) but Google Translate and body language can take care of it, so we never had any problem with communication. 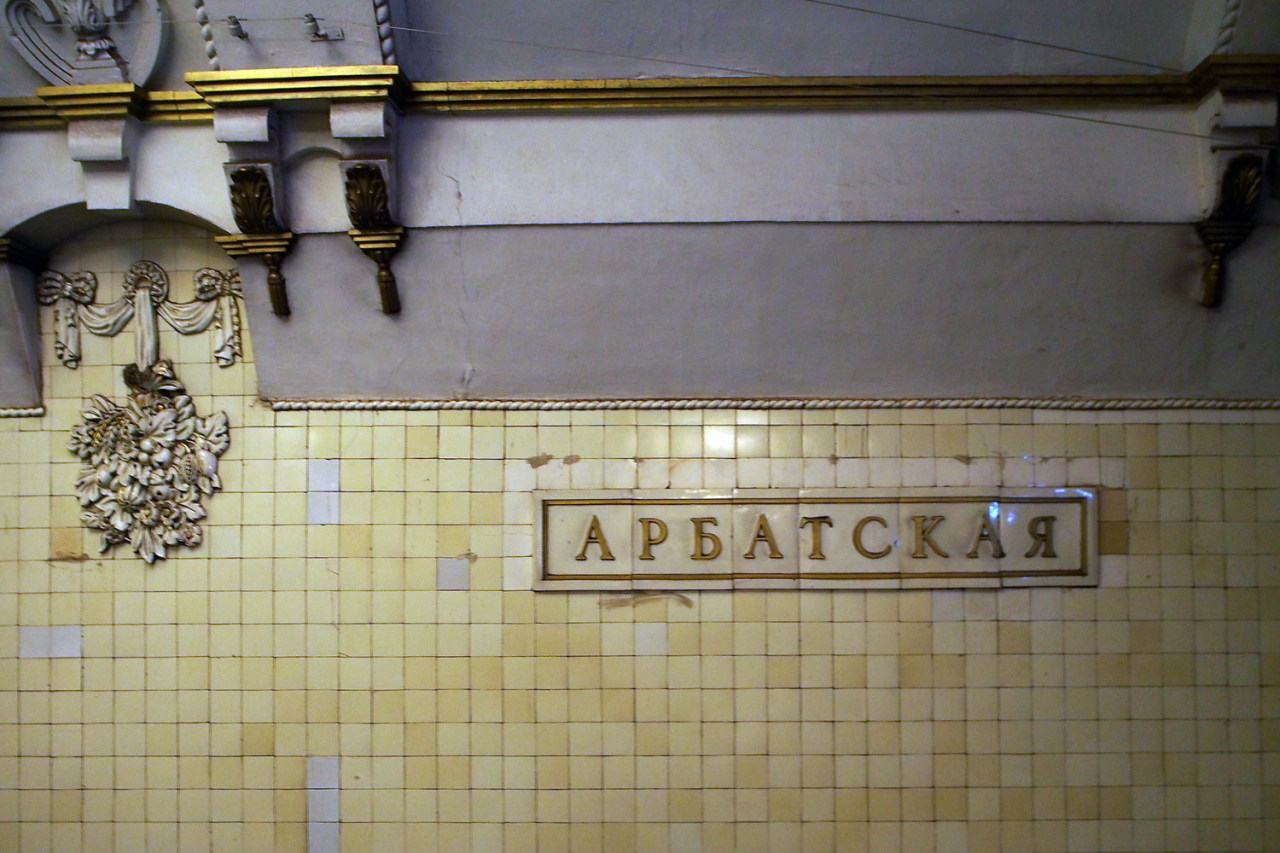 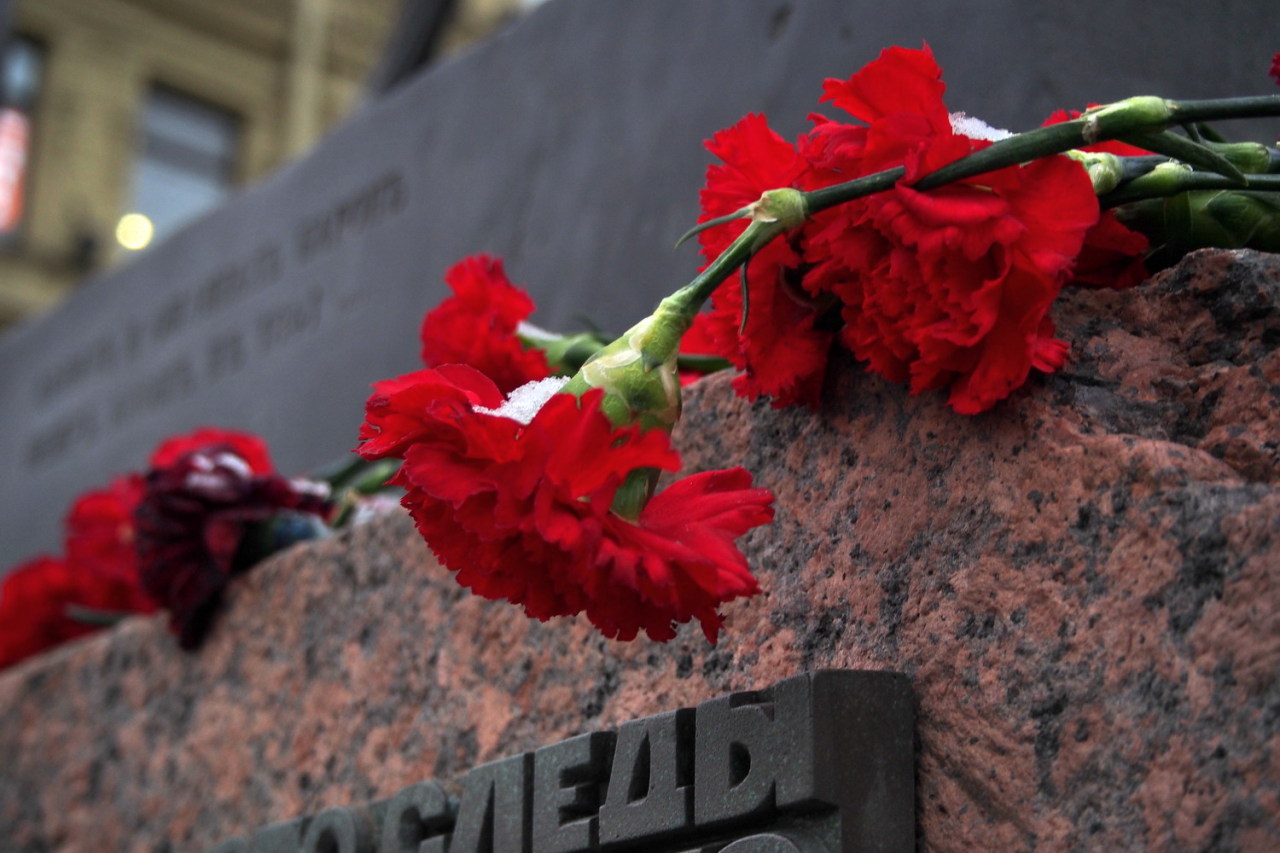 Stay tuned for more detailed posts about each city!