I didn’t do the book reviews last month because of the yearly book round-up, so here are the books I read in December and January: 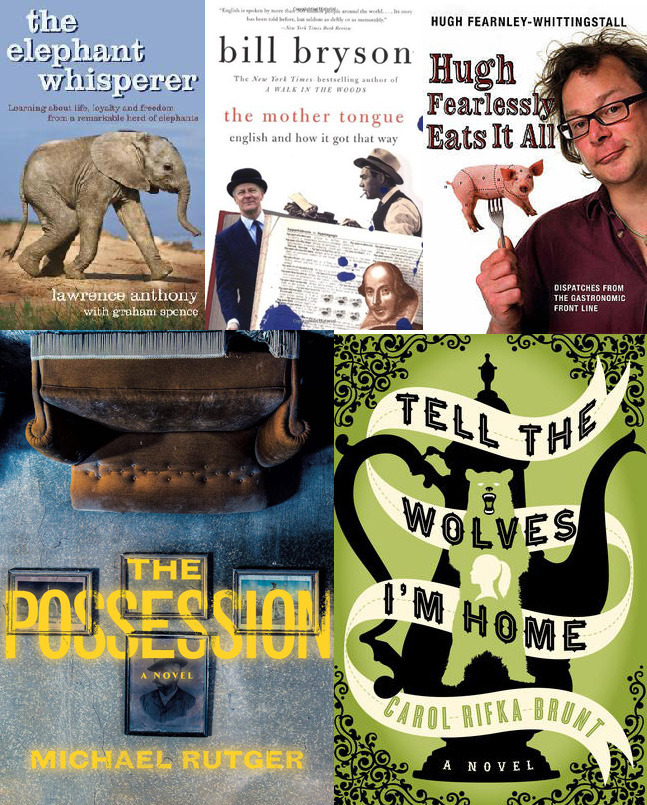 The Elephant Whisperer by Lawrence Anthony:

Last year, I read an article about a herd of elephants that travel every year to the house of the conservationist who saved them, on the day of his death, to mourn him. It’s such an extraordinary story that I had to look up the conservationist, Lawrence Anthony, and when I discovered that he’d written a book, I had to read it. The book details not just his relationship with the herd but also his efforts running a game reserve in South Africa, and knowing the bittersweet ending of the story (Anthony died quite suddenly just 3 years after the book was published, and the herd has been making their annual pilgrimage to his house ever since) makes it even more moving. 5/5

The Mother Tongue by Bill Bryson:

It’s by my favorite non-fiction writer, and it’s about one of my favorite topics (language), so it’s no surprise that I enjoyed this book. I’ve read some books on the development of language (mostly English) before, but this is one of the few that lays out the facts in an organized manner. The information may not be new, and it’s certainly not as funny as his travel books, but it’s very readable and informative, and that’s all I ask from my non-fiction books. 4/5

Hugh Fearlessly Eats It All by Hugh Fearnley-Whittingstall:

I hadn’t heard of Hugh Fearnley-Whittingstall before, but apparently, he’s a pretty famous British chef known for his campaigns on food and environmental issues. I picked up the book mainly because the title sounds funny, and I like food and reading about food. This book is a collection of his food articles, ranging in topics from his criticism of fast food and the industrialization of food-producing to his experiences of local food and celebration of fellow chefs. It’s not as funny as the title suggests, but it’s certainly going to make you think. 3.5/5

The Possession by Michael Rutger:

After a few non-fiction books, I wanted to relax with something fictional, so I picked up the next book in The Anomaly series. This one deals with witchcraft and demon possession (in a pagan, not Christian, sense), and while it’s still enjoyable, it’s not as absorbing as the first one, and again, the explanation feels a little… I don’t know, too easy, too convenient. Still, I appreciate the fact that Rutger is able to weave the problems of the main plot into the personal subplots of whatever his characters are going through. It adds some depth to the story. 3/5

This book, about a teenage girl dealing with the death of her beloved uncle from AIDS during the 1980s, is not my usual fare, but I do enjoy a coming-of-age drama from time to time, so I decided to check it out. But I had mixed feelings about this one. On the one hand, the characters are all very well-written, and some of their thoughts/interactions/revelations really hit you hard. On the other hand, they are all unbearably self-absorbed (except for Toby, the uncle’s boyfriend. Toby is a cinnamon roll that must be protected at all cost.) I really wanted to shake them and shout “Just talk to each other, dammit!” Plus the story is not as tight as I’d like. 3.5/5

So what did you guys read?