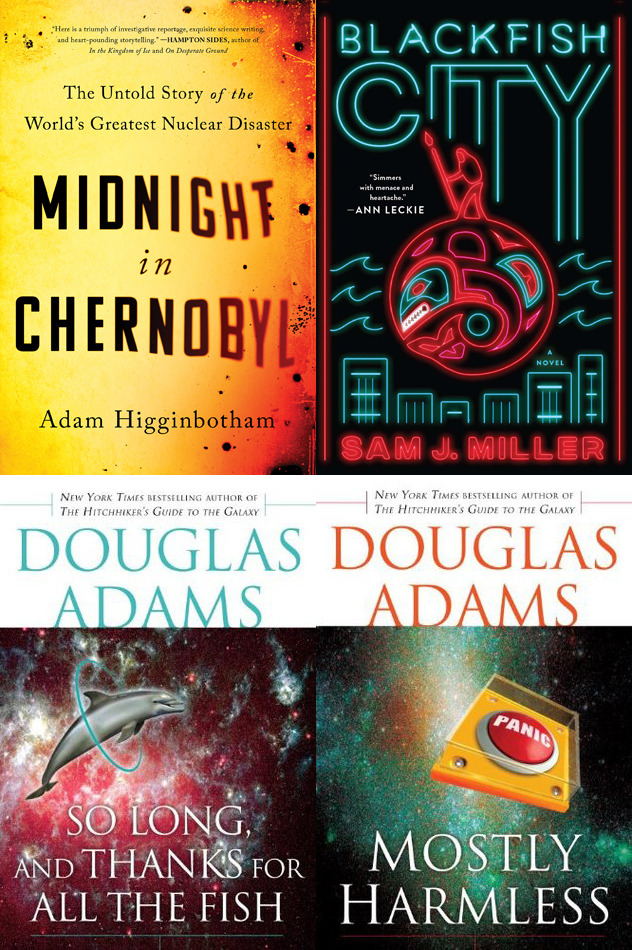 Midnight in Chernobyl by Adam Higginbotham:

Growing up, the only thing I know about the Chernobyl Disaster is that when it happened, my mom was in Russia, 5 months pregnant with me (but she was quite a safe distance away in Siberia.) However, I just finished the HBO mini-series Chernobyl, and it was so brilliant (very hard to watch sometimes, but brilliant nonetheless) that I knew I had to read more about it. This book is a very well-researched, very detailed exploration of the disaster – from the construction of the power plant to the night of the explosion itself and the long, ongoing cleanup process that follows. It helps that I’ve watched the mini-series though, because there are a lot of characters and a lot of scientific information that it can be a bit overwhelming at times – thankfully, it’s told in chronological order so it’s never difficult to follow. 5/5

It’s hard to believe, but I haven’t read any new sci-fi book this year, so when I saw this book being praised for its unique world-building, I decided to check it out. The story certainly sounds interesting – it takes place in a post-apocalyptic floating city, controlled by landlords and crime bosses, where its inhabitants struggle to eke out a living while facing the threat of a contagious neurological disease. Into this setting, a mysterious woman appears, atop an orca with a polar bear by her side, rumored to be the last surviving member of a group of people that had their minds bonded with animals. As various characters react to her appearance, we slowly find out why she is there and what connects them all. From that synopsis, you can probably tell that the book is a bit much, right? And it is. All the elements are good, and the characters are interesting, but as the book keeps jumping from one POV to another, it never really comes together. The first 2/3 of it drags, while the last 1/3 of it is really rushed. Disappointing. 2/5

So Long, and Thanks for all the Fish and Mostly Harmless by Douglas Adams:

I just finished translating these two books in the Hitchhiker’s Guide series, and while they are still good, they’re not as enjoyable as the previous three. “So Long” is slightly better in terms of tone, while “Mostly Harmless” is better in terms of plot (then again, you don’t read Douglas Adams for the plot, which is why I’m not going to include any summary), but it’s kind of depressing, and, as the final book in the series, it leaves you feeling so bad for Arthur Dent. The poor guy just wants to be left alone and have a cup of tea, dammit! Still, I’m very proud to say that I’ve translated three out of the five Hitchhiker’s Guide books. It’s a major boost to my nerd cred. 3/5

What did you guys read this month?