← To Tuck Or Not To Tuck
The Siesta →

I’ve been reading a lot of heavy non-fiction books lately, so this month I wanted something a little lighter. Here goes: 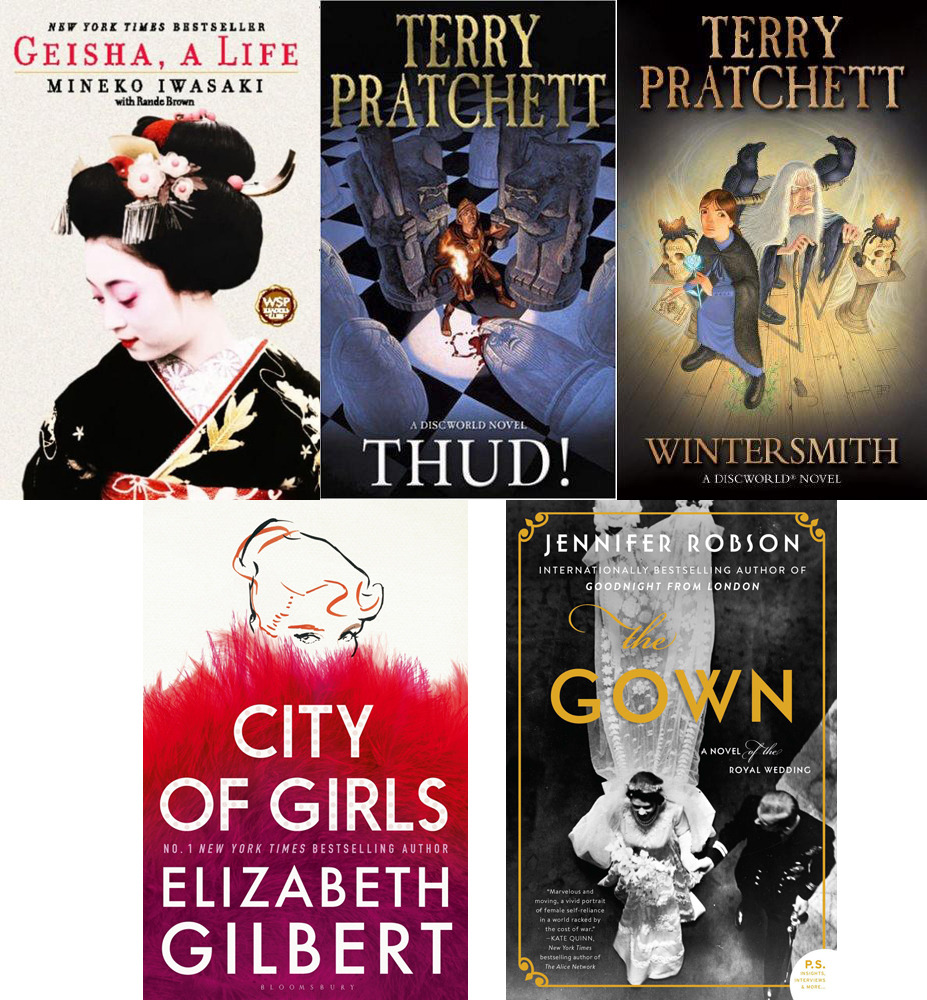 Geisha, a Life by Mineko Iwasaki:

Mineko Iwasaki is one of the real-life geishas that Arthur Golden interviewed for his novel “Memoirs of a Geisha”. Upset that he revealed her name (despite agreeing not to do so) and twisted the facts to make his story more sensational (the most egregious of all is to add a sexual aspect to the work of geishas, making them appear little more than high-end prostitutes), Iwasaki sued Golden and later wrote her own autobiography to clear things up. While I enjoyed “Memoirs of a Geisha” in a superficial kind of way, I absolutely hate the fact that the main character became a geisha simply because she wants to please a man, so I appreciate Iwasaki’s book for showing us the more accurate and intricate details of the geisha’s world. Unfortunately, her writing leaves a lot to be desired – it’s so dry and plodding that even when she describes some moments of great passion or sadness, I can’t connect to it at all. 2.5/5

Thud! and Wintersmith by Terry Pratchett:

I haven’t read any Discworld book in a while – there aren’t many of them left, so I’ve been trying to pace myself. But I wanted some books I knew I would enjoy, so Discworld it is.

Thud! is a Night Watch book, in which Sam Vimes has to solve a case of a murdered dwarf while tension in Ankh-Morpork is running high as the anniversary of a legendary battle between dwarves and trolls approaches. It is a standard Watch novel, which starts with a murder mystery and develops into something much more profound and philosophical, but it has the additional adorable/emotional touch with the appearance of Young Sam, Vimes’ baby son. I dare you to read their scenes together without laughing and crying at the same time. 5/5

Wintersmith is a Tiffany Aching book, which revolves around our young witch-in-training, with the help of her loyal Nac Mac Feegle, dealing with the personification of winter, after she accidentally interrupts the seasonal dance to signify the transition between winter and summer and draw the Wintersmith’s attention. It’s not as funny as the other Tiffany Aching books, but it’s still very good, and I especially love the explanation of what a witch’s work entails – you don’t always see that from the Witches book, but since Tiffany is still in training, you get to learn along with her. 5/5

City of Girls by Elizabeth Gilbert:

Yes, the author is Elizabeth Gilbert of Eat, Pray, Love fame. This is pure chick flick and therefore not my taste at all, but like I said, after so many non-fiction books, I just wanted some fluff. This novel follows Vivian, a 19-year-old girl who, in 1940, is sent to New York City to live with her aunt in a rundown theater and gets swept up in the glamorous, hedonistic lifestyle of theater folks and showgirls. That part is fun, and Vivian is a seamstress, so there are a lot of descriptions of beautiful clothes and outfits, which I must admit that I love to read in any book.

The problem is, the book doesn’t stop there. It’s written in the form of a letter from Vivian, now an old woman, to another woman, Angela, about her relationship with Angela’s father, and this guy doesn’t show up until the last 90 pages or so of a 470-page book! So you keep waiting for this supposedly important guy to appear, and when he does, it feels incredibly rushed and doesn’t have much to do with the main character’s development – in fact, her character arc seems all but finished by the time he shows up. Imagine if you’re watching Titanic and old Rose starts telling her story about Jack, and Jack himself only appears during the last 20 minutes of the movie. That would just be terrible storytelling, wouldn’t it? If this was just a book about NYC and theater life during WWII, it would’ve been much better. 3/5

The Gown by Jennifer Robson:

This came up in Goodreads’ recommendations after I finished City of Girls, and I can see why – it also takes place in the 1940s (1947, in this case, and it’s set in London, not NY) and also features seamstresses, or more exactly, embroiderers who are assigned to work on Princess Elizabeth’s wedding gown. The story focuses on two particular women, both struggling with the memories of the war, their personal lives, and with keeping their work on the gown a secret. There is also a storyline in the present as the granddaughter of one of these women tries to uncover her grandmother’s past life. It’s a little light on drama and predictable, but the descriptions of the embroideries are exquisite, and the characters are relatable (much more relatable than City of Girls!) 4/5