Sorry for the late post – the time just completely slipped my mind. Anyway, it’s a month of non-fiction for me, and on a whole, they’re pretty good. Here goes: 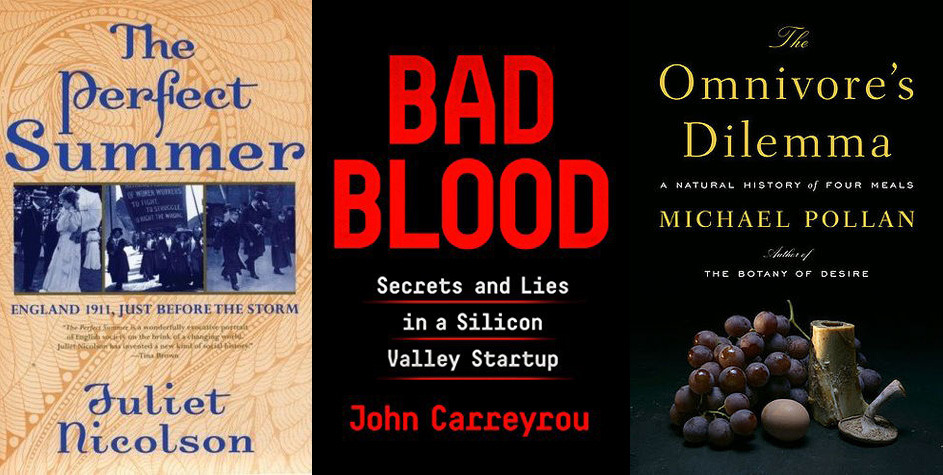 The Perfect Summer by Juliet Nicolson:

This explores life in England in the summer of 1911 – George V has just been crowned, Winston Churchill is Home Secretary, and the Titanic is about to set off on its maiden voyage. The subject matter is certainly interesting – it’s a summer of social and political tension, of traditional values clashing with modern ideas – but the book is definitely a case of the whole being less than the sum of its parts. Certain sections are interesting, but the book overall fails to make me see what’s so fascinating about the summer of 1911 and why the author chose to write about it (compare it with Bill Bryson’s “One Summer – America, 1927”, and you’ll see what I mean.) Plus, the chapters are weirdly divided. Ostensibly, they are chronological, starting in Early June, then Late June, and so on until Early September. However, instead of following the events in those time frames (which would be the boring but logical thing to do), each chapter then focuses on a different subject – Early June focuses on Queen Mary’s struggle with the upcoming coronation, Late June focuses on a socialite’s London “season”, etc. The book is certainly well researched, but it feels both too detailed and not detailed enough somehow. 2/5

This seems to be on everybody’s reading list lately. It follows the rise and fall of Elizabeth Holmes, who managed to build a billion-dollar Silicon Valley startup out of essentially a lie – that her company has revolutionized healthcare by performing blood tests from just a finger prick. I’ve never heard of Holmes or her company, Theranos (which sounds like a Marvel villain), but this is getting rave reviews and being made into a movie starring Jennifer Lawrence, so I decided to check it out. It’s certainly fascinating and disturbing to read about all the lies that Holmes and her cronies told and all the people they stepped on (one Theranos employee ended up committing suicide) on their way to success – the red flags are there from day one, so you’re on the edge of your seat waiting for the moment it all comes crashing down. My one complaint is that the book is very detailed on the “what” and the “how”, but less so on the “who” and the “why” – in other words, we never really find out who Elizabeth Holmes really is. Is she a master manipulator who hoodwinked everyone with her charm, or is she simply a victim of the “fake it till you make it” mentality whose delusions of grandeur got out of hand? We may never know. 4.5/5

The Omnivore’s Dilemma by Michael Pollan:

This book attempts to answer the question “What are we having for dinner?” by exploring the three sources of food – industrial, organic (or alternative), and foraged – and showing what really goes into our food. It is interesting stuff if you’re into food and science and history, but sometimes it can be horrifying to read, especially the “Industrial” part, which is about how corn has found its way into everything we eat and how it has ruined not only our taste buds and our health, but also agriculture and the environment (though it is not the corn’s fault. It’s our fault.) It really makes you think about what you’re putting into your body. My complaint is that the writing can be a bit dry, and I sometimes found myself zoning out and just flipping the pages without understanding a single word of what I was reading (but maybe it’s because I always read it before bed.) 4.5/5