I only managed three books this month, but in my defense, two of them are pretty dense, so here goes: 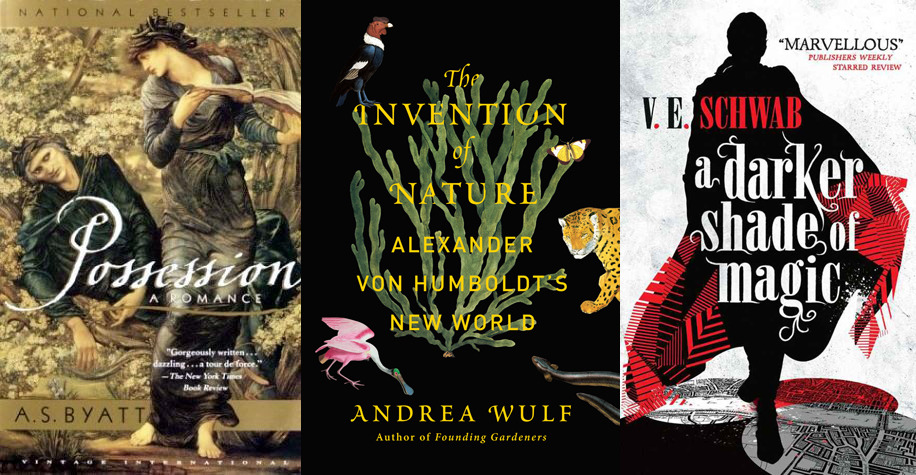 I’ve read one other book by A.S. Byatt, “The Children’s Book”, because I was hired to translate it. I didn’t think much of it at first, but after translating it (which took forever because it’s so dense), I’d gained a new sense of appreciation for the characters and their lives. So I decided to check out her more famous novel to see what she does with a more defined and contained plot – two academic/literary researchers stumble upon evidence that two Victorian poets may have had a secret affair, and must rush to discover the truth before their rivals.

It sounded great, but I wasn’t impressed. It’s mainly because I can’t connect to any of the characters, and the stakes aren’t high enough (at the end of the day, it’s just about some dead poets. The emotional stakes just aren’t there.) And I admire Byatt for including the poems and stories by her fictional poets, but they slow down the story a great deal. I often found myself skipping those passages to get back to the main plot, even though I already knew the story from the terrible adaptation with Gwyneth Paltrow. 2/5

This is another book that hooks me because of its pretty cover. Plus, I’m always interested in books about natures and explores, so a biography of one of the most prominent naturalist explorers of the 19th century seems like a good choice. I’ve never heard of Humboldt before, so it’s fascinating to read about him and to learn that many of our understandings about nature today came from him or were popularized by him – such as the idea of plant geography or the very concept of nature preservation. The book also includes some chapters on how Humboldt has influenced other scientists and writers, like Darwin, Henry David Thoreau, and John Muir. These can be a little reaching (take the chapter on Simon Bolivar, for instance – sure, Bolivar and Humboldt were close acquaintances after Humboldt’s trip to South America, but how much did Humboldt influence Bolivar, really?) but they’re interesting to read, nonetheless. I also appreciate the fact that everything is in chronologically order instead of jumping all over the places like some biographies I’ve read (like the one on Sissi, for example). 4/5

A Darker Shade of Magic by V.E. Schwab:

After quite few non-fiction books, I figured it was time to get back to my roots with a fantasy novel. This one, the first of a trilogy (one of these days, I’d like to read a standalone fantasy book for a change, thank you very much), follows Kell, a young magician with the ability to travel between four different worlds – Grey (our non-magical world), Red (the magical, thriving world), White (the world starving for magic), and Black (the world destroyed by magic). One day, Kell stumbles upon a dangerous relic from the Black world, and together with a human pickpocket, he embarks on a journey to restore the balance between the worlds. It’s quite standard fantasy stuff, as you can see, but the world-building is interesting and the action is fast-paced, which makes for a quick, easy read. My only complaint is that the characters, to me, feel a little flat. Still, I enjoyed it enough to want to check out the other two books in the series. 4/5

What did you read this month? You can check out my friend Mike’s read here, or discuss your books in the comment!