It’s an OK month of reading – I enjoyed some books and was disappointed by others. I’ve also realized why I’ve been reading so many non-fiction books lately. Between my two jobs, script reading and teaching, I have to read so much crappy fiction writing that I can’t enjoy novels anymore. At least non-fiction doesn’t make me angry, unless it’s terribly written.

Anyway, on to the books: 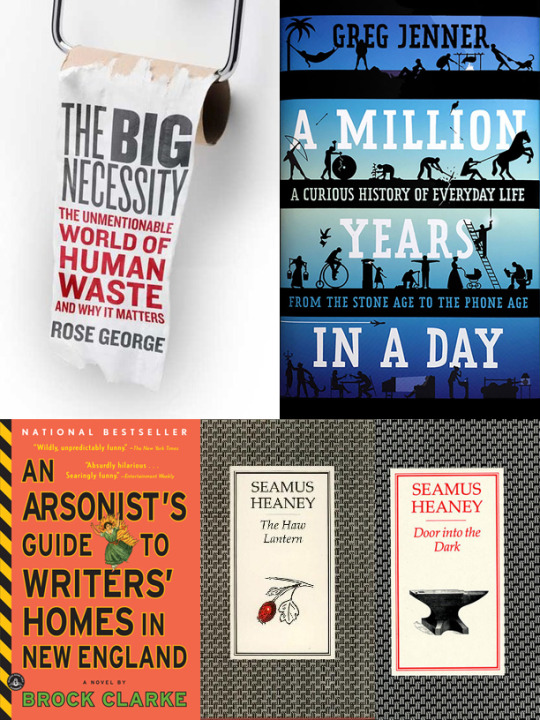 The Big Necessity by Rose George:

This book is about toilets. When I picked it up, I was hoping for a history of toilets (hey, what can I say? I’m interested in all aspects of history), but this is more about the current problems in the world of toilets and sanitation all across the globe. Yet I wasn’t disappointed, because it is strangely fascinating to read, especially when you realize how many people in the world don’t have access to toilets (in fact, indoor plumbing in Vietnam is still relatively new. I still remember visiting my grandmother in the countryside when I was about 10 and being told to “just go in the nature.”) It really makes me think about my privileges. 4/5

A Million Years in a Day by Greg Jenner:

This is another “historical everyday life” book, sort of like Ian Mortimer’s “The Time Traveler’s Guide” series. It follows the tasks of a normal day – such as brushing one’s teeth, showering, eating, etc. – and looks into the development of those activities throughout history. It’s a great idea, but the execution leaves something to be desired. The book supposedly follows 24 hours in a day (or, more exactly, 15 hours, from 9 AM to 12 AM), but for some reason, the author decides to skip the entire afternoon and go straight from 12 PM to 6 PM. There are also two chapters on alcohol and two on time, which, even though they talk about different things (one chapter is about champagne and the other is about alcohol in general; one chapter is about time-keeping in general and the other is about the development of the clock), feels very repetitive to me. Also, the author is a writer and consultant of Horrible Histories, but some of the jokes feel a little try-hard. 3/5

An Arsonist’s Guide to Writers’ Homes in New England by Brock Clarke:

I picked this up because the title caught my attention. It’s about a man who accidentally burned down Emily Dickinson’s home near his house when he was 18 years old, and 20 years later, somebody starts burning down writers’ homes all over New England, which forces him to confront his past. Sounds promising, doesn’t it? Unfortunately, the book is a total letdown. Mostly it’s due to the characters, who are either feckless or selfish or both. The main character is the worst of all. And then there is the writing, which tries so hard to be funny and profound, and ends up anything but. 1/5

The Haw Lantern & Door into the Dark by Seamus Heaney:

I got so angry reading “An Arsonist’s Guide” that I decided to read some poetry just to forget it. I’ve read Heaney’s “Death of a Naturalist” before and loved it. The poems in these two collections are more philosophical and obscure in their meanings, so I didn’t enjoy them as much, but some I still quite like (“Clearances”, in “The Haw Lantern”, is an elegy to Heaney’s mother and very moving). I also love how Heaney managed to describe the most mundane details or activities of everyday life in rural Ireland in such beautiful language (like “A Lough Neagh Sequence”, which is about eels and eel fishermen.) Maybe I’m just biased because I love Ireland. 3.5/5

What did you guys read?