There are two reasons I stayed in the Netherlands an extra week after our Iceland trip, and one of them is the Gay Pride Canal Parade in August. I’ve never seen a gay pride parade before, and since the Amsterdam parade is unique in that it is held on the canals, I knew I had to check it out.

On that day, my friend from The Hague also came up for the festivities, so we met her at the Central Station and walked to the start of the parade – at Westerkerk, near Anne Frank’s House. The parade was scheduled to start at 1:30 PM, but at 11 AM, the station and the streets were already thronged with people dressed up in all sorts of colorful and outrageous costumes. The closer we got to Westerkerk, the thicker and noisier the crowd got – there were party boats all along the canals blasting music at full volume. It was a bit stressful, but oddly exciting at the same time. 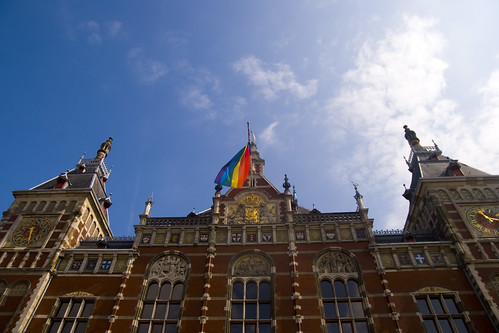 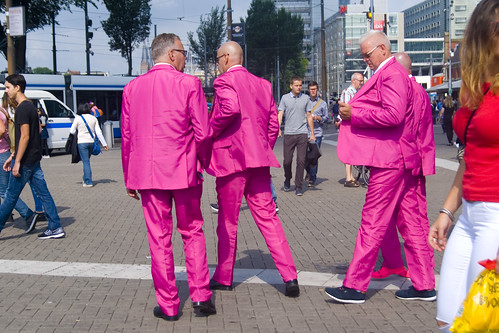 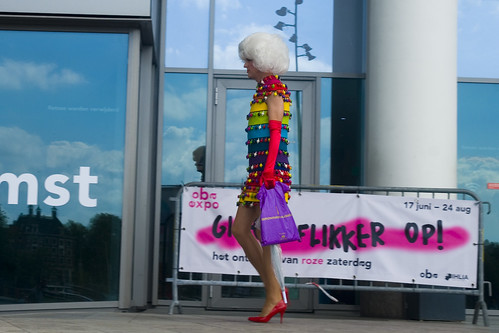 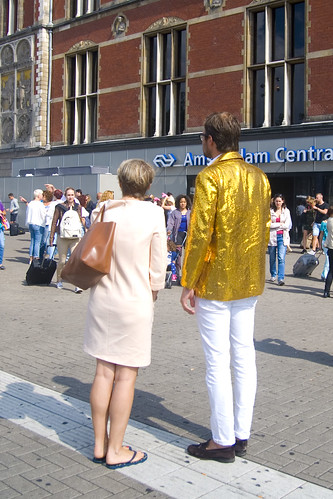 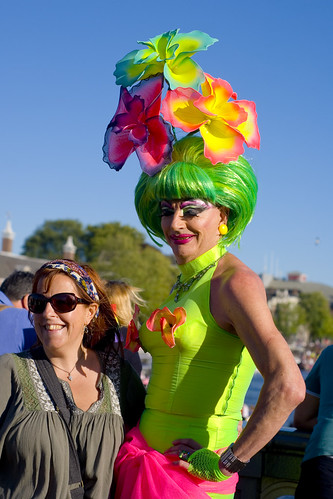 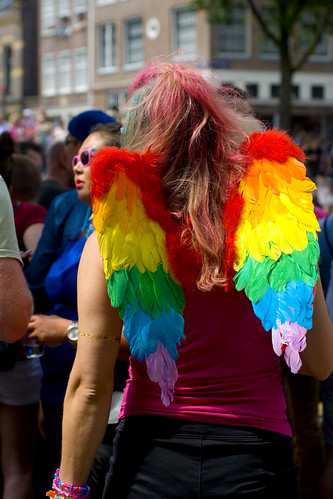 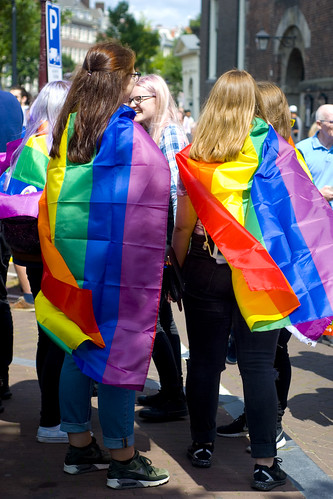 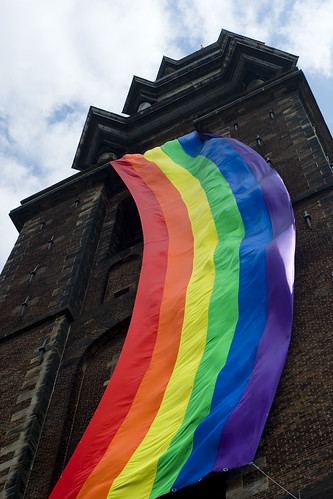 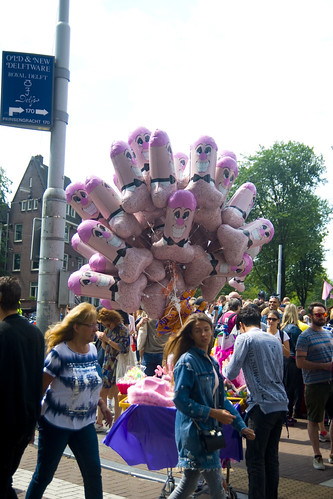 By the time we got to Westerkerk, the line along the canal was at least three-deep, and there was absolutely no room left on the bridges – since those are the best spots for photos. So we wandered down the canal, in the same direction as the parade, until finally I found an empty spot between two houseboats. It wasn’t ideal, but at least it was clear and we could watch the parade. It was truly an explosion of colors and sounds. There were all sorts of boats from all sorts of organizations, but my favorite has to be the senior citizens’ – their slogan is “Ou(d)t and Proud” (“oud” means “old” in Dutch). That’s clever. 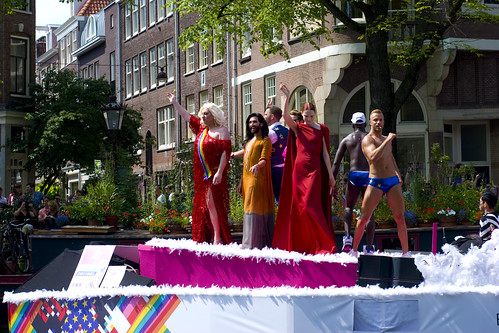 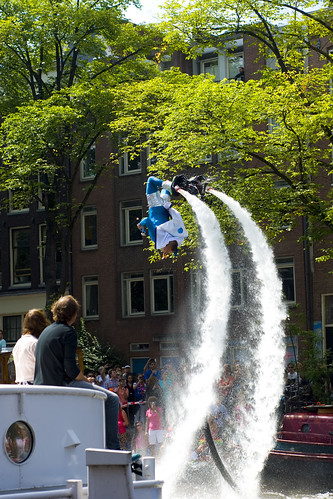 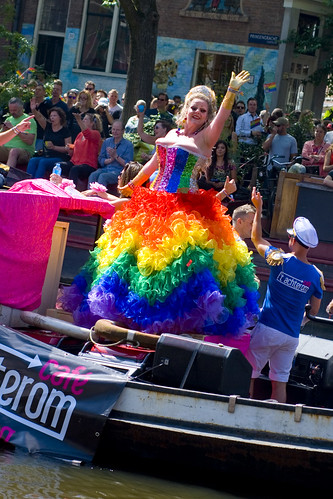 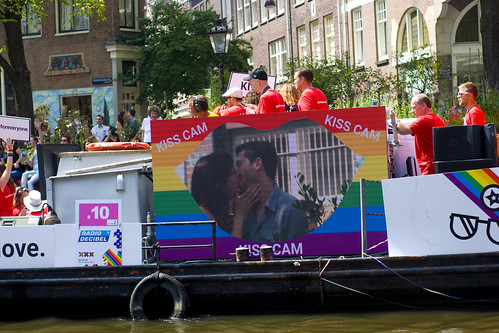 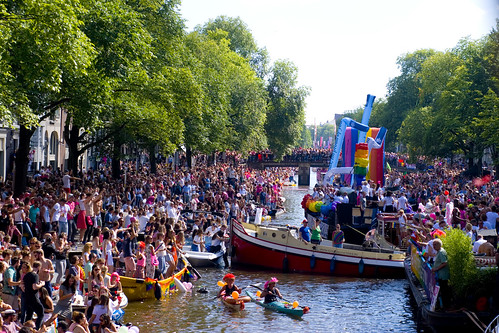 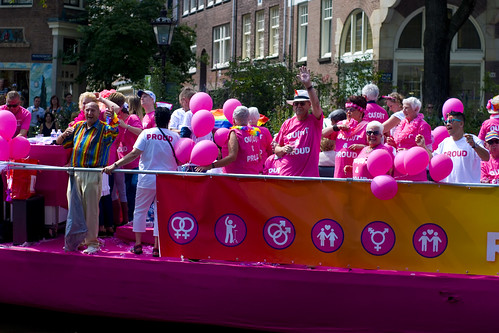 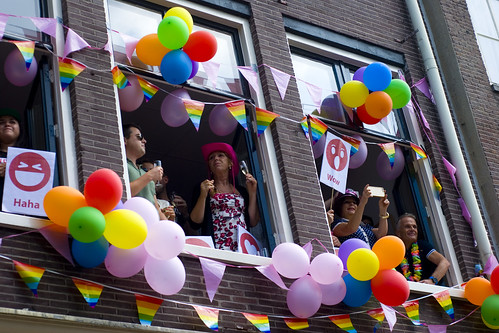 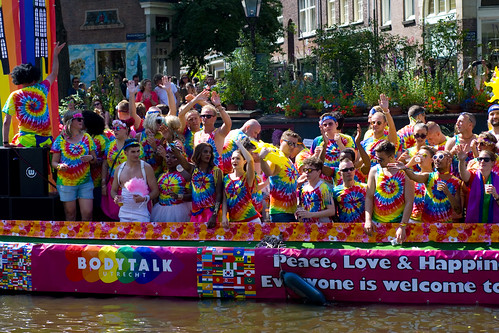 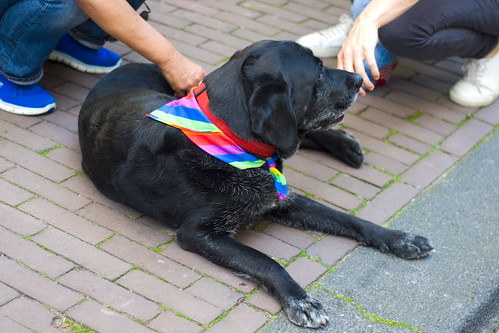 Even this cutie is getting in the spirit of things

After an hour, though, we were beginning to get sensory-overloaded, so we left for the quieter side streets and stopped at a café for some much-needed refueling. After that, we just wandered in the general direction of the parade, until we ended up at its conclusion at Rembrandtplein, on the other side of the old town. There was a huge street party nearby, but we’re not exactly party girls, so we decided to call it a day and went home.

I was exhausted from all the noises and the sights, but still, I had a great time – I may be a hardcore introvert, but sometimes it’s fun to go outside of my comfort zone and join a huge celebration like this. This is Amsterdam at its wildest, and I’m glad I got to see it. 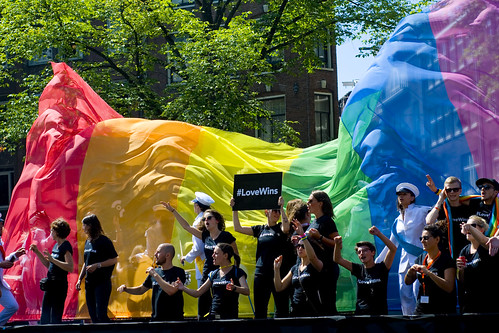