This month’s book reviews post is a week late, because I was half-way through my fourth book and wanted to finish it for the reviews. Overall, it was a good month of reading even though not all of the books are great. 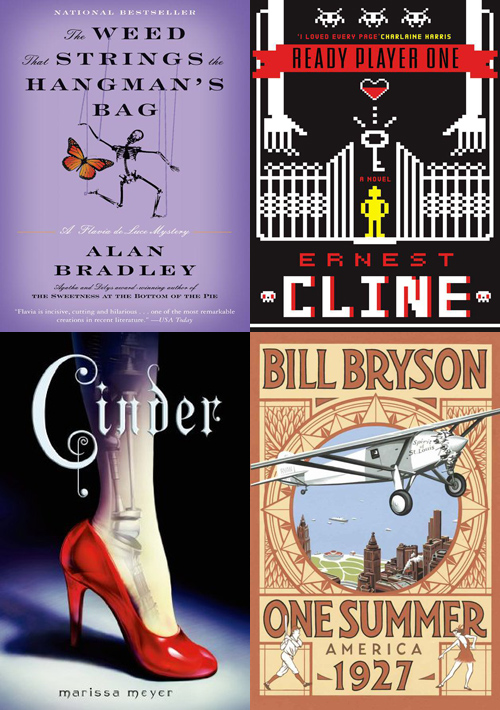 The Weed That Strings the Hangman’s Bag (Flavia de Luce #2) by Alan Bradley:

I wasn’t terribly impressed with the first Flavia de Luce book (The Sweetness at the Bottom of the Pie), but I like books set in the English countryside, and I like murder mysteries, so I decided to check out the second book in the series. Bad call. All the things that I disliked about the first book – the less-than-believable main character (an 11-year-old self-acclaimed poison expert and amateur sleuth), the sluggish pacing (the murder, that of a traveling puppeteer, doesn’t occur until quite late in the book, and everything before that doesn’t really build up to it), the thin plot (the case is solved fairly quickly and easily) – are present, and they’re even worse than in the first book. In the first book, at least Flavia’s own father was framed for murder so there is something at stake, whereas here I don’t care about the case at all. Plus Flavia’s relationship with her family is repetitive – the book stresses again and again how distant her father is and how her sisters torment her, but if Flavia is so smart and self-assured as her first-person narration makes her out to be, she would’ve learned to live with it. I think this is the author’s way to humanize Flavia, but it only makes her even less believable. 1.5/5

I guess if I like murder mysteries set in the English countryside, I’m going to stick with Miss Marple from now on.

This was one of the first books I downloaded onto my Kindle, but I didn’t get around to reading it until now, because after The Hunger Games and Matched, I’m kind of sick of YA dystopian novels. Still, this one is a retelling of Cinderella, in which Cinderella is a cyborg, so it sounds interesting.

Unfortunately, that premise is the only good thing about this book. Sure, some of the details of the fairy tale are reworked quite cleverly (Cinderella’s slipper is the cyborg’s mechanical foot, her pumpkin coach is a rusted orange VW that she fixes up, etc.) but overall it’s very disappointing. The characters are boring and stereotypical (of course Cinder falls in love with the prince at first sight, of course she has a grease spot on her face when they first meet – oh em gee it’s so cute, right? – and of course the prince is prepared to throw away everything for her.) The world feels underdeveloped (Cinder lives in a place called “New Beijing”, in which the culture feels vaguely East Asian but none of it is explored; it doesn’t explain why cyborgs are considered second-grade citizens, or why, in a futuristic world, Earth still uses an outdated form of monarchy), and the story feels like a set-up for the other books in the series instead of something that can stand on its own. 1/5

After those two disappointing books, I needed a palate-cleanser, so I turned to my favorite non-fiction writer. This is his latest book, which details one extraordinary summer in the history of America: from May to September 1927, Charles Lindbergh flew across the Atlantic Ocean, Babe Ruth hit 60 home runs, the first talkie was released, the stage was set for the Stock Market crash two years later, work on Mount Rushmore began, and many, many other things happened. It’s a testimony to what a good writer Bill Bryson is that I was enthralled even though I couldn’t care less about aviation and have no knowledge whatsoever about baseball. I’m only interested in history in general, but everything in this book is just fascinating. 4.5/5

Ready Player One by Ernest Cline:

This is the book I was reading on my Kindle in the SIA post last Monday, and the one I finished for the reviews – it was a really quick read so I didn’t want to hold on to it until next month.

The story is set 30 years in the future, when Earth has been destroyed by wars and pollution, and most of its inhabitants have lost themselves in a virtual reality called OASIS, where one lives through an avatar, like in a video game. When the creator of OASIS passes away and leaves behind clues to an Easter egg that can unlock his massive wealth, a teenager joins the hunt for the egg, while evading a corporation who is also after the egg in an attempt to take over OASIS.

This is quite possibly the nerdiest book I’ve read, as it’s filled with references about 80’s video games, movies, TV shows, anime, basically everything about 80’s pop culture. That being said, you don’t have to be a gamer (I’m not) to enjoy this. I do find it a little slow in the beginning, and some of the references feel like mere name-check (like the author is saying “See how much obscure 80’s culture I know?”) instead of serving the plot, but after a while the story draws me in, and the flat writing doesn’t bother me too much. After all, it’s getting adapted by Steven Spielberg, so it has to be good, right? 4/5