← Pan Am Recap: “One Coin in a Fountain”
Color Coordinated Or OCD? →

– Looking for some bright colors to liven up a dreary fall day? The Fashionista Next Door got some inspirations/suggestions for you.

– I keep forgetting about Modly Chic’s Fashion Friend Beauty Friday feature. If you’re like me and still not sure what to be for Halloween, this week’s questions might give you some ideas.

– This may also be helpful for Halloween if you’re going as Betty from Mad Men: Solanah of Vixen Vintage’s guide to petticoats. Or, you know, you can just wear them on a normal day and be awesome.

– After the clusterf**k that is the Missoni for Target line, I can’t say I’m excited for the Versace for H&M collection. It’s not my style anyway, but what do you think?

– A random note: a clever Venn diagram explains what aliens, robots and zombies have in common.

Blog of the Week: Wayward Daughter by Cait. Ah, the British fashion bloggers. How I envy them. As much as I want more colors in my clothes, I can’t help but love Cait’s mostly neutral, impeccably British wardrobe. Also, she lives in Edinburgh, which is probably my favorite city in the UK (I still prefer the countryside, but if I have to pick a city I’ll go with Edinburgh.) 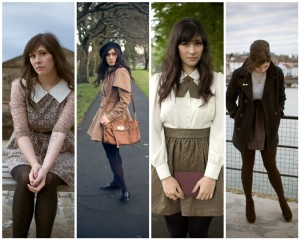 Book of the Week: “The Life and Time of the Thunderbolt Kid” by Bill Bryson. I used to think Terry Pratchett was the only author whose books could make me laugh out loud, until I was introduced to Bill Bryson. This is his memoir about growing up in the Midwest during the 50’s, and it’s full of funny and nostalgic details about the era. Mad Men may give us a more cynical view, but I honestly think that it was an age of innocence the likes of which we’re never going to see again.

Song of the Week: “Once Step Closer” by Linkin Park. Next Monday, October 24, is Linkin Park Day, which I think only the hardcore, borderline obsessive fans like me still remember. Their debut album, Hybrid Theory, was released on that day in 2000 (eleven freaking years ago!!!) So here’s the first single that introduced me to the band. Oh the times I’d screamed my throat out to this song…