An episodic character drama is tough to pull off, and that’s why most episodic TV shows are about cop/doctor/lawyer, because there’s a “case of the week” in which the characters can have some personal moments. With Pan Am, it’s almost the other way around, where the character stuff (what they have of it, anyway) is based on some paper-thin plot, and that’s why it’s so frustrating to watch, since those character moments feel so forced. 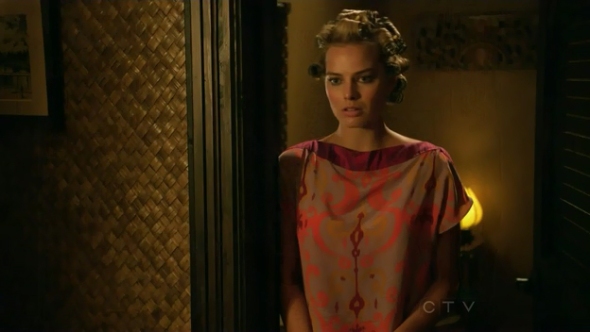 Take this week’s episode. I actually enjoyed the personal stories (Kate vs. Laura, Douchy Co-pilot vs. the World), but they aren’t built up at all. Kate blows up at Laura supposedly because the stress of her spying mission brings out the existing sibling rivalry, but come on. She has to wait a few hours at a cable office then hands a camera to some random dude. It’s not like she’s dodging bullets while Laura is out gallivanting with Maggie.

And yes, it’s sad that just when Kate is ready to make nice, Laura just (figuratively) says “Screw you, sis” and moves in with Maggie. However, it’s not as sad as it could be; Laura seems to be overreacting and Kate is inconsistent, since their little spat isn’t built up effectively, and Kate’s change of heart is merely from seeing a picture Laura took of her (when did Laura take it anyway?). Like I said, paper-thin.

Douchy Co-pilot gets a story this week! It makes him a little more sympathetic (I still can’t remember his name), but I feel it doesn’t quite belong in the show. It’s like the writers get together and go, “Hey, it was the Space Age, we need a storyline with space travel!” so they give Douchy this storyline about wanting to be an astronaut but getting shot down by his even more douchy father. It adds an unnecessary layer on top of an already crowded show. Not to mention the CGI in his flashback of the accident is unbelievably bad (I know, I know, I’ll stop bitching about it.)

As for the other girls, Colette continues to have no defining characteristic other than being French, and Maggie’s hair drives me nuts.

So let us look at more screencaps instead, because they’re pretty: